An Old-School Marvel Vs. Capcom 2 Throwdown Was The Best Fighting Game Event Of 2018

On the evening of December 30, a group of fighting game veterans gathered together in New York City for Battle of the Strongest, a Marvel vs. Capcom 2 exhibition featuring some of the game’s best east coast competitors. Even though it was a small show with relatively low stakes by modern standards, the tournament turned out to be the most exciting fighting game competition of the year.

Battle of the Strongest’s organiser Michael “IFC Yipes” Mendoza is a big reason why Marvel vs. Capcom 2 became such a phenomenon among fighting game fans. His blend of in-game skill and slang-spawning commentary made him a pillar of the competitive scene, and he continues to lend his voice to tournaments to this day. When Yipes announced that he would be putting together a Marvel vs. Capcom 2 event, the fighting game community took notice, tuning in on Sunday night in droves to see the classic game played at a high level. 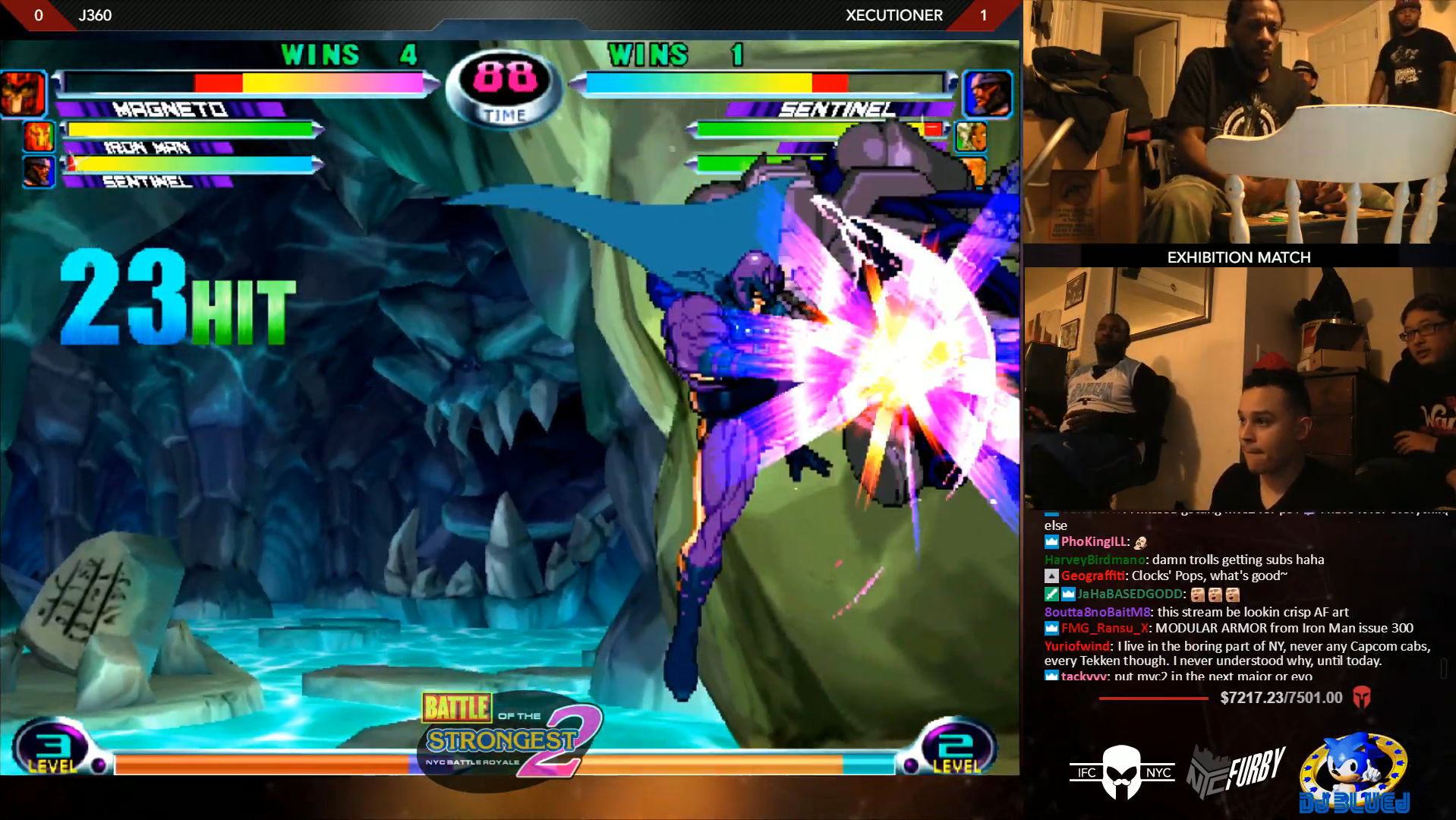 Where major tournaments like Capcom Cup have the look and feel of a Las Vegas boxing match, Battle of the Strongest was more like an underground fight club. There were no spotlights, no massive stage, and no trophies. Instead of using sponsored gaming chairs, many took the old-school approach of sitting on the ground with their ancient, heavy arcade sticks, surrounded by fellow competitors and a smattering of spectators. The room appeared downright claustrophobic on stream, especially with the requisite Sega Dreamcasts, monitors, and broadcasting equipment taking up space, but the players Yipes invited to participate appeared as though they were in their element.

The entire Battle of the Strongest stream was the polar opposite of the sterilized tournament environments that have come with corporate involvement. Yipes—who, while still entertaining has certainly cleaned up his act over the last few years—dropped F-bombs left and right, and the players themselves doled out trash talk both during and between their sets. The atmosphere was that of an early 2000s arcade, where you played like you hated the person standing next to you and let them know in no uncertain terms when you got the better of them. Age and experience have naturally quelled some of the open animosity, but the eight Marvel vs. Capcom 2 players Yipes invited to participate on Sunday never passed up an opportunity to jab a fallen foe.

The fighting game community ate it up. At its peak, Battle of the Strongest drew thousands of viewers on Twitch, and the crowdfunding campaign opened by organiser and stream producer Arturo “Sabin” Sanchez collected donations from around the world. The initial $US1,000 ($1,421) prize pool quickly ballooned to $US8,000 ($11,366), with contributions from community veterans like like Evo co-founder Tom Cannon and Super Arcade owner Mike Watson. I even threw in a few bucks myself. Battle of the Strongest was an ode to the legacy of Marvel vs. Capcom 2 competition, and viewers responded with an organic outpouring of love and cash.

After securing first place, Erik “Smooth Viper” Arroyo capped off the evening with an intense pop-off—not against his opponents, but against someone who wasn’t even there, a west coast player known as Abraham “Neo” Sotelo. Earlier in the month, the two had exchanged words on Twitter, with Neo saying he would let the NYC players know if he ever decided to “make yet another coffin for another east coast body.” In lieu of a social media response, however, Smooth Viper took the opportunity winning Battle of the Strongest afforded him to let his thoughts be known in a more public way.

“Neo, when your bitch arse is ready, you come see me, pussy,” Smooth Viper yelled into the camera as the rest of the room erupted. “I’m the best over here, that shit ain’t gonna change in 20 years, 30 years, even when I’m dead. My son will take that crown. So, if you’re ready to come see me nigga, come see me. Until then, be the bitch nigga that you are.”

Everything about Battle of the Strongest, from the game chosen to the outpouring of money from viewers and even Smooth Viper’s outburst, felt like a catharsis. It’s no secret that 2018 was a rough year for the fighting game community. In addition to Capcom’s complete mishandling of both Marvel vs. Capcom: Infinite and Capcom Cup, players are frustrated by things like the relatively low $US7,500 ($10,655) payout to the Tekken World Tour champion, the sudden exodus of esports organisations Echo Fox and Fursan Esports, and the shaky outlook of Dragon Ball FighterZ competition. Where corporate involvement was once seen as the next step for the fighting game community, most players are starting to realise that placing your hopes and dreams in the hands of outside entities might not provide the most authentic experience, or even a secure future.

While it may not have been the sort of tournament that would pull in advertising revenue or mainstream support, Battle of the Strongest felt like the only way for the fighting game community to close out the year. It was a return to the exciting, gritty roots that made the scene great in the first place, with very little mind given to appeasing a corporate structure or enhancing an investor’s bottom line. Battle of the Strongest was simply a distilled fighting game experience with one of the genre’s most celebrated installments, a group of friendly rivals gathering together to talk shit and smack each other around for a bit. And that’s all it needed to be. That’s all fighting games ever needed to be.

Ian Walker loves fighting games and writing about them. You can find him on Twitter at @iantothemax.