catwomancomicsdc comicslois lanesupermantom kingwalmart
To sign up for our daily newsletter covering the latest news, features and reviews, head HERE. For a running feed of all our stories, follow us on Twitter HERE. Or you can bookmark the Kotaku Australia homepage to visit whenever you need a news fix.

Not exactly the most delightful theme week for the World’s Finest.

The death of a female character to advance the traumatic emotional storyline of a male one is a tale as old as time in comic books — hell, a Green Lantern storyline (and one Gail Simone) is what gave us the trope term “fridging” in the first place!

But output from DC this week — specifically writer Tom King — featuring two of its biggest characters has brought forth the debate about the regressive trope again in the weirdest of manners.

The first sample came not in the batch of DC Comics titles that released in comic book shops this week, but in a still relatively fresh market for the publisher: Its line of US Walmart-exclusive 100 Page Giant series.

The initiative is meant to reach out to a market of potential comics readers, young and old. It’s something DC (and many of its fellow publishers, including Marvel) had retreated from decades ago to refocus on speciality comic book stores. These new anthology books collect classic tales about DC’s top heroes alongside brand-new exclusive material from its top creatives — such as Mr King, who’s been penning a new ongoing storyline with art from Andy Kubert in the Superman edition of 100 Page Giant.

The “young” part of that “young and old” new readership is the source of a controversy this week over Superman 100 Page Giant #7, which hit Walmart shelves this past Sunday and immediately started drawing criticism from parents shocked to find that the issue’s storyline sees Lois Lane graphically murdered multiple times.

Warning to all parents: the current Walmart Superman book by Tom King features 12 pages of Lois Lane being brutally and graphically murdered over and OVER again on page. I’m hearing it’s ::extremely:: disturbing. Please be careful before your children see it. ???? https://t.co/78RXsm0RZJ

It turns out the reason for the many murders of Lois is that most of the story takes place in Superman’s head: He’s on a mission off Earth, and when a phone call to Lois doesn’t get picked up, Clark immediately starts running potential nightmare scenarios through his head. Thus, all the torture and the shootings and the despair and whatnot.

In context, it all makes sense, grounding the superhuman Man of Steel in a depressingly relatable paranoid fear that’s brushed across the minds of countless people before, no matter how briefly.

The response to the issue from parents has been loud enough to warrant a statement from King himself, who explained his reasoning behind the story with Comic Book Resources:

Because it isn’t widely available, I’m not sure people know the story (which is beautifully told by Andy, Sandra, and Brad). So here it is: On a mission far from home, Superman tries calling home. Lois doesn’t answer. As people do when they can’t get in touch with their loved ones, he starts imagining worst case scenarios. Why won’t she answer? Images of her demise crowd his thoughts, driving him crazy. In the end, the line connects and Superman and Lois discuss how worried they are about each other.

They both lead dangerous lives; however, neither of them asks the other to compromise that life. Lois has her career; Superman has his. Despite the worry and risk, they trust each other, they depend on each other. Regardless of the hard of it all, they both go forward and they both continue to save the world. To me this is a metaphor for the best parts of love. Love comes with stress, agony, risk, vulnerability, and we shouldn’t deny that stress, agony, risk, and vulnerability.

King makes good points about the maturity of the story he wanted to tell — and of course comics, even the ones about superpowered godlike beings in tight Spandex who shoot laser beams out of their eyeballs, can absolutely tell those stories. They’ve been telling them for years and years, and are not strictly confined to being “for kids”.

But at the same time, 100 Page Giant, while not explicitly targeted at children, is intended to bring in a wide, new audience of comics readers with its supermarket-shelf positioning, and DC pitched it as such in its announcement of the line.

That expanded reach is inevitably going to mean that kids and parents picking up the book sight unseen because it has Superman on the cover — so maybe a story that sees Lois Lane graphically murdered repeatedly before explaining that she’s alright could fit into other publishing plans instead of the comic that’s going out to that much broader audience.

Between its ongoing books and mature initiatives such as Black Label, it isn’t as though DC doesn’t have avenues to tell these stories. 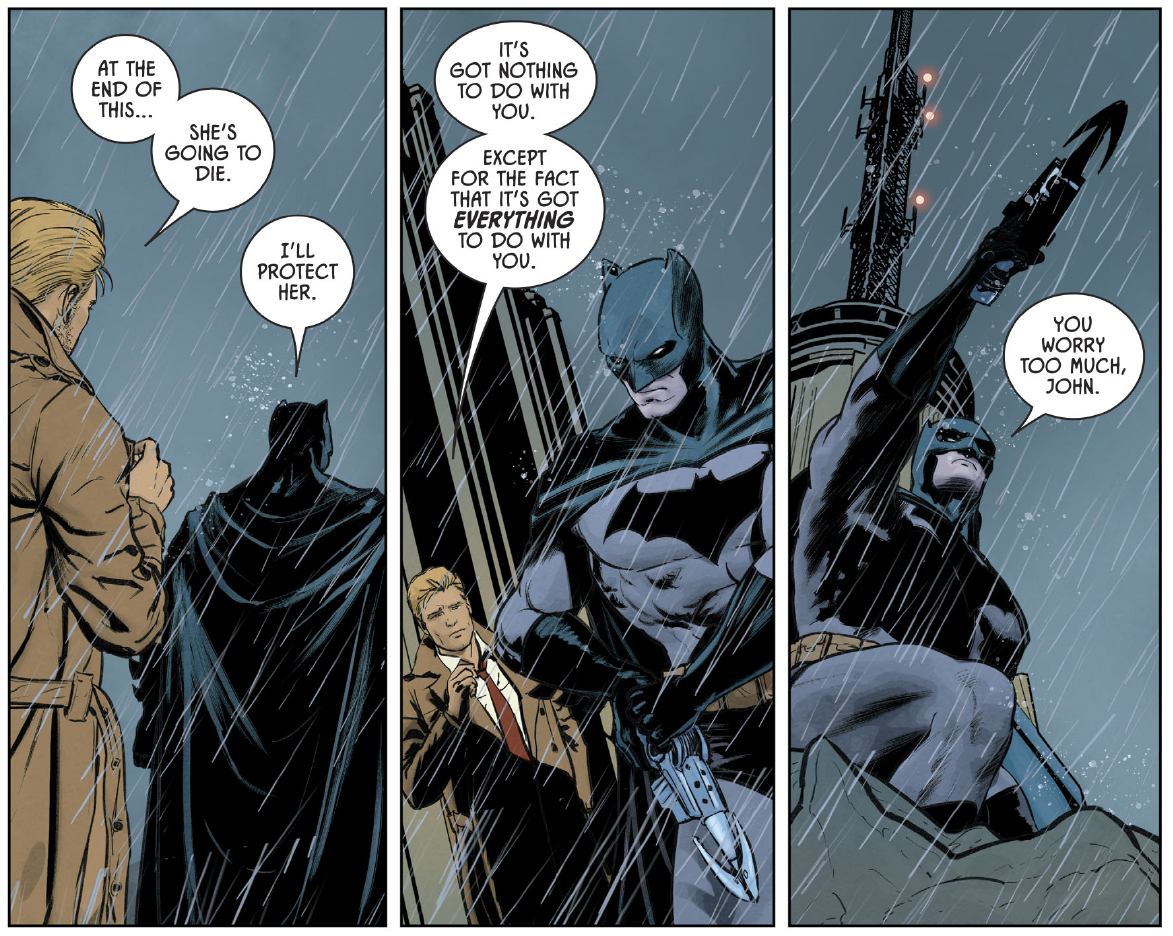 Speaking of those ongoing books, in an odd twist of fate, another King-penned story with some similar tropes unfurled in this week’s Batman #63. The current arc of the book — featuring writing by King, art by Mikel Janin and Jordie Bellaire, and lettering by Clayton Cowles — has seen Batman thrust into multiple dream scenarios that are, well, more like nightmares, where he finds himself seeing those nearest and dearest to him shockingly perish.

This time around the victim is Selina Kyle, AKA Catwoman — putting Batman into a dream world where she did not actually leave him at the altar back in Batman #50, and the two are now instead happily married.

And it does, when, while out on patrol with him one night, Selina is shot by a sniper and killed — because that’s just Batman’s life. 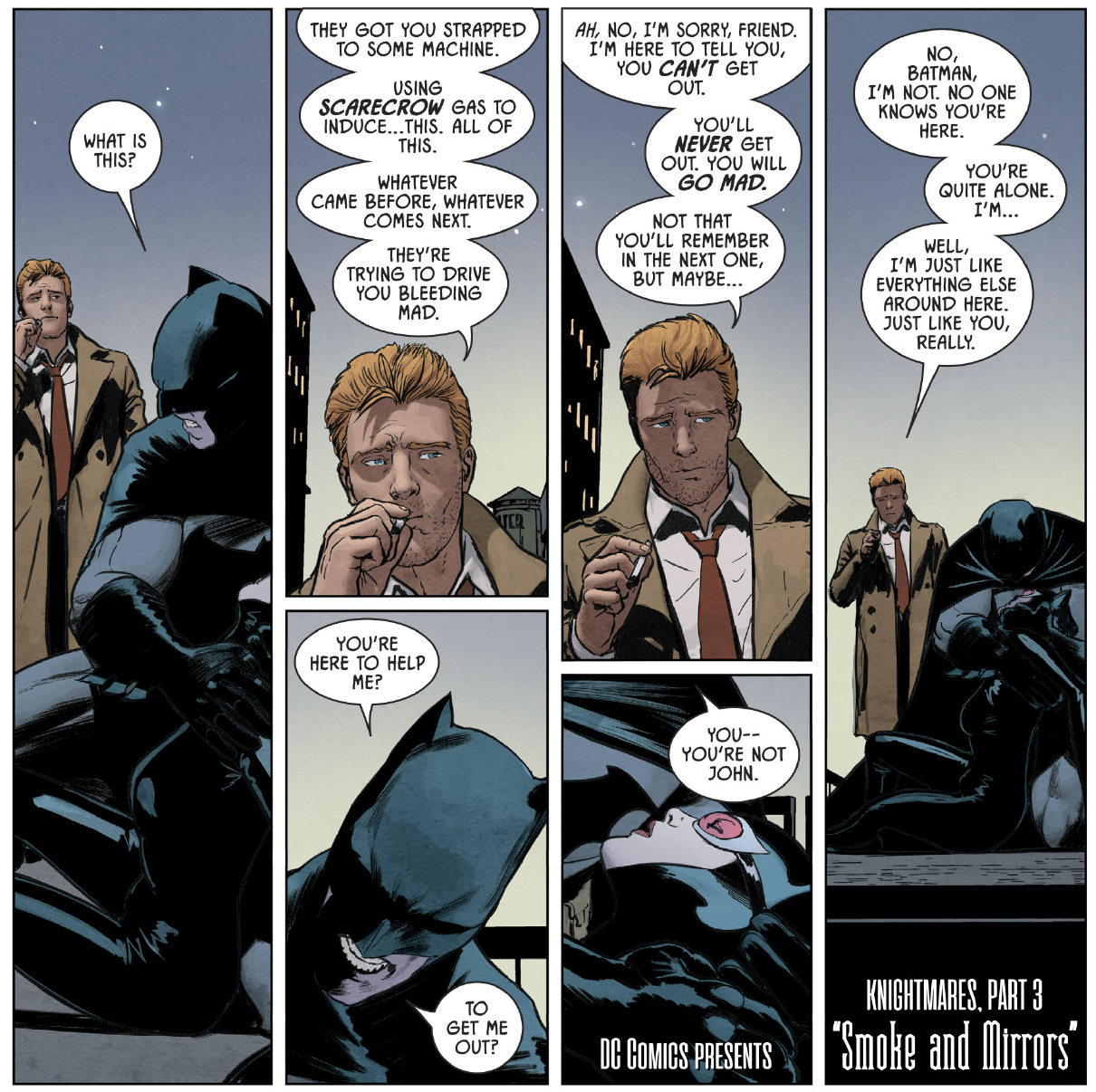 Well, that and the fact that Batman is currently hooked up to a machine pumping him with Scarecrow gas, in the hopes that looped scenarios of him losing the few people he loves will drive him insane. That’s also the reason for the fleeting happiness!

But even if this, unlike the Superman 100 Page Giant #7 story, ends a little more miserably for its hero, having the two series juxtaposed against each other by the immediate proximity of their releases makes for an interesting mirror between Batman and Superman. And for a lot of dead wives, imagined or otherwise.

It’s incredibly — incredibly — unlikely that these two stories publishing the same week was planned. Comics distribution is a wild and arcane thing, and when story deadlines can change and shift on a regular basis, the fact that two similar stories about two of DC’s most iconic heroes being forced to face the trauma of the death of their wives are out within days of each other is just an unfortunate circumstance.

But the fact that, unfortunate circumstance or otherwise, DC can trip over itself with duelling tales of dead wives is still a bit of a troubling trend regardless.

Whether an odd quirk of publishing schedules or not, this weird confluence over one of the most infamous tropes in comics storytelling has put DC in a bit of a bizarre place. It’s like poetry — it rhymes. Sometimes.