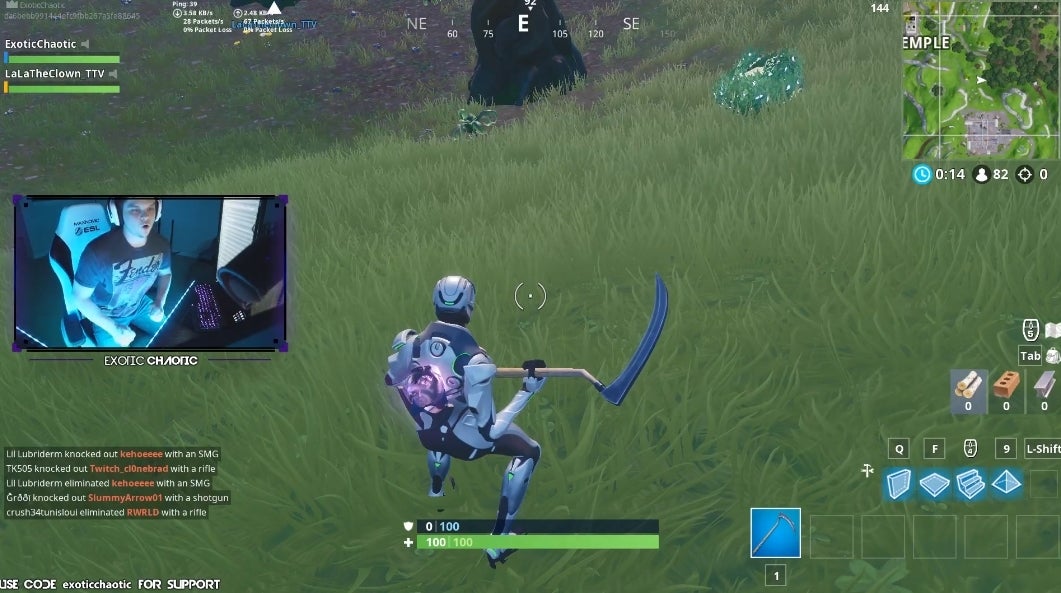 “Wait a minute,” said Fortnite streamer Exotic Chaotic upon noticing the number of digits in a donation he received on Twitch earlier this week. “That can’t be right.” He was so stunned that he stopped playing to check his PayPal. There it was: $US75,000 ($103,985).


Exotic Chaotic stood up and lost his shit. “DUDE,” he bellowed while spinning around in incredulous celebratory circles. “WHAT IS THAT SHIT?”

It turned out that that shit, which many are saying marks a new Twitch record for most money donated in a single go, came from fellow Fortnite streamer and friend KingMascot. For a moment, though, Exotic Chaotic was convinced that somebody was trying to get a rise out of him with a fake donation.

“At first I thought my moderator ‘IEsh’ was messing with me,” he told Kotaku today via DM. “He sometimes would test $US100 ($139) donations through Streamlabs just to set the alert off and startle me, so at first it was [like] ‘Oh, this must be a joke.’ Then I checked my PayPal and saw $US72,000 ($99,826) on hold and then kind of just examined everything about it for a bit—trying to make sure it was real money. It cleared 24 hours after he donated.”

The streamer who made the donation, KingMascot, says he did it because he wanted to help his friend during a financially difficult time.

“I do not have a very high income,” Exotic Chaotic said. “My girlfriend has worked full-time to support my career as a Fortnite streamer, so I owe it to her and my four-year-old son to protect and grow this money for their futures.”

“My girlfriend has worked full-time to support my career as a Fortnite streamer, so I owe it to her and my four-year-old son to protect and grow this money for their futures.”

KingMascot, who could afford to line his pal’s pockets because he was an early investor in Bitcoin and now trades stocks, had the idea for the mega-donation last fall, but it took a while to get it into place.

“It’s been a month since I knew I was gonna do it, but PayPal wasn’t the easiest to work with,” he said. “Felt timing [was] right for around the holidays so they could have a great start to the year.

KingMascot said that he’s since received thousands of messages in the aftermath, most of them kind messages of support, a few of them just people asking for money.

Exotic Chaotic said his friendship with KingMascot arose from their shared passion for collecting every cosmetic available in Fortnite, but he was “very surprised” about the donation.

“He’s mentioned since that he didn’t like how my internet issues had scared off a lot of viewership I had had after winning tournaments like Ninja Vegas,” Exotic Chaotic said. “He said that influenced a little bit of his decision to make my year.”

Exotic Chaotic had recently won $US30,000 ($41,594) in Fortnite’s Fall Skirmish series, but he was unable to hold onto it because his old car “wasn’t even safe to drive,” and he badly needed a new one. This money, though, he said he can meter out more wisely.

“It’s very fun making bigger donations and seeing how happy it makes them,” he said. “If I grow my stream to an extent, I will definitely make other streamers very happy. I did decide to pay one of my supporters a big chunk of change for helping me get this far and designing a lot of my stuff and giving me advice… But for all I know, this will only happen once, so I need to make sure I take advantage of the opportunity and secure my son’s future and repay my gf for believing in me.”