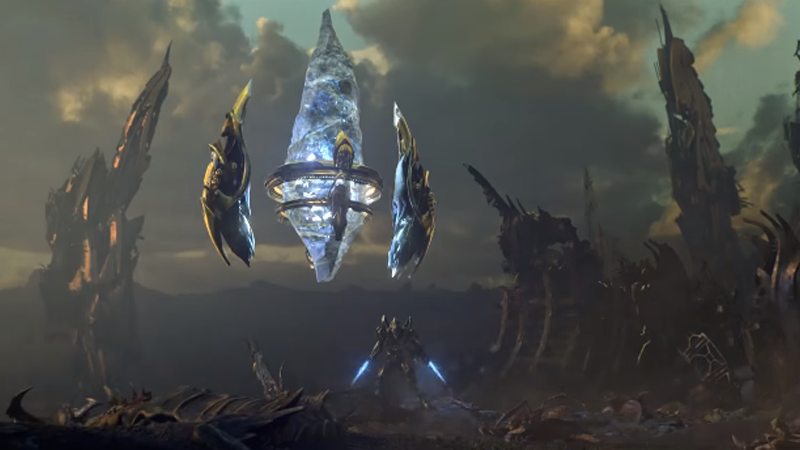 In our battle of man vs machine, the future looks very promising for our AI overlords. This morning Google’s DeepMind team showcased their AlphaStar AI agent against two Starcraft 2 pros.

While the AI dominated there was still a glimmer of hope for mankind.

Starcraft 2 is currently considered the grand challenge of AI development as the competitive game due to the game’s complexity, the imperfect information given to players and mix of both long-term planning and real time actions.

So, of course, the DeepMind team had to conquer it.

In a livestream earlier this morning, replays from a series of games played by Starcraft 2 pros Grzegorz “Mana” Komincz and Dario “TLO” Wünsch against AlphaStar had the AI decisively routing the human opponents.

All matches were Protoss vs Protoss on the Catalyst map under standard competitive conditions. This was to reduce training time for AlphaStar by allowing it to focus solely on one match-up.

TLO was the first pro to fall 5-0 to AlphaStar although he was at a distinct disadvantage as he normally plays Zerg instead of Protoss. Mana – who usually plays Protoss and was thus more comfortable in the match-up – fared a little better but also lost 5-0.

In the games that I was able to watch, AlphaStar made great use of micromanagement to get full advantage of the Stalker units while splitting the human player’s focus across the map. One of the biggest challenges of playing Starcraft 2 comes from being able to divide your focus between multiple specific tasks. AlphaStar did not suffer from that problem.

Those matches took place in December and AlphaStar has had time to learn more since then so there was one more match played between Mana and AlphaStar at the end of the stream. The funny thing is that humans are also capable of learning.

Mana managed to squeeze out a victory against AlphaStar by building an overwhelming force after surviving through an initial wave of economy disruption, using lessons learned from his previous defeats. Humanity is on the scoreboard!

“AlphaStar takes well-known strategies and turns them on their head. The agent demonstrated strategies I hadn’t thought of before, which means there may still be new ways of playing the game that we haven’t fully explored yet,” said TLO

You can download and watch the full replays DeepMind blog.

It started by being fed anonymised replays of human games and was quickly able to defeat Blizzard’s ‘Elite’ AI in game with 95% success rate. From there the agent was split into multiple copies with their own goals that competed against each other in an ever-growing league to build up knowledge of Starcraft 2’s expansive strategic space through population-based reinforcement learning.

Over the course of the league, the agent developed new strategies. First there were the cheesey cannon rushes and Dark Templar builds that all new Starcraft 2 players quickly learned (and learned to loathe). Soon those strategies were supplanted by more economic focused game plans that built a strong economy while disrupting the opponent’s economy as much as possible.

Some of these tactics, including a deliberate sacrifice of two Oracles to destroy enemy workers, were used in the matches against the pro players.