Grand Theft Auto Online’s newest game mode isn’t about powerful supercars or big armoured tanks. Instead, this new mode focuses on something tiny and fast: remote controlled cars. The RC Bandito is a small RC car that first appeared last month in the Arena War update, which added a whole new deadly game show to GTA Online. Now the little RC car has received its own series of races, and they are a lot of fun.

The new RC car races are set up like standard checkpoint races in GTA Online. Players race around a track, hitting checkpoints along the way, and the first player to finish the set number of laps wins.

I was happy to find that the RC cars feel very different from a standard car. They move quickly, can turn on a dime, bounce around more and just generally feel more wild, in a good way.

At first I was hitting walls and spinning out, but once I got the hang of how the RC car handles I had a great time zooming around the eight different tracks Rockstar created. As I got better with the little cars, I found myself almost never braking or slowing down. Instead I started finding the angles on turns that let me keep my speed. 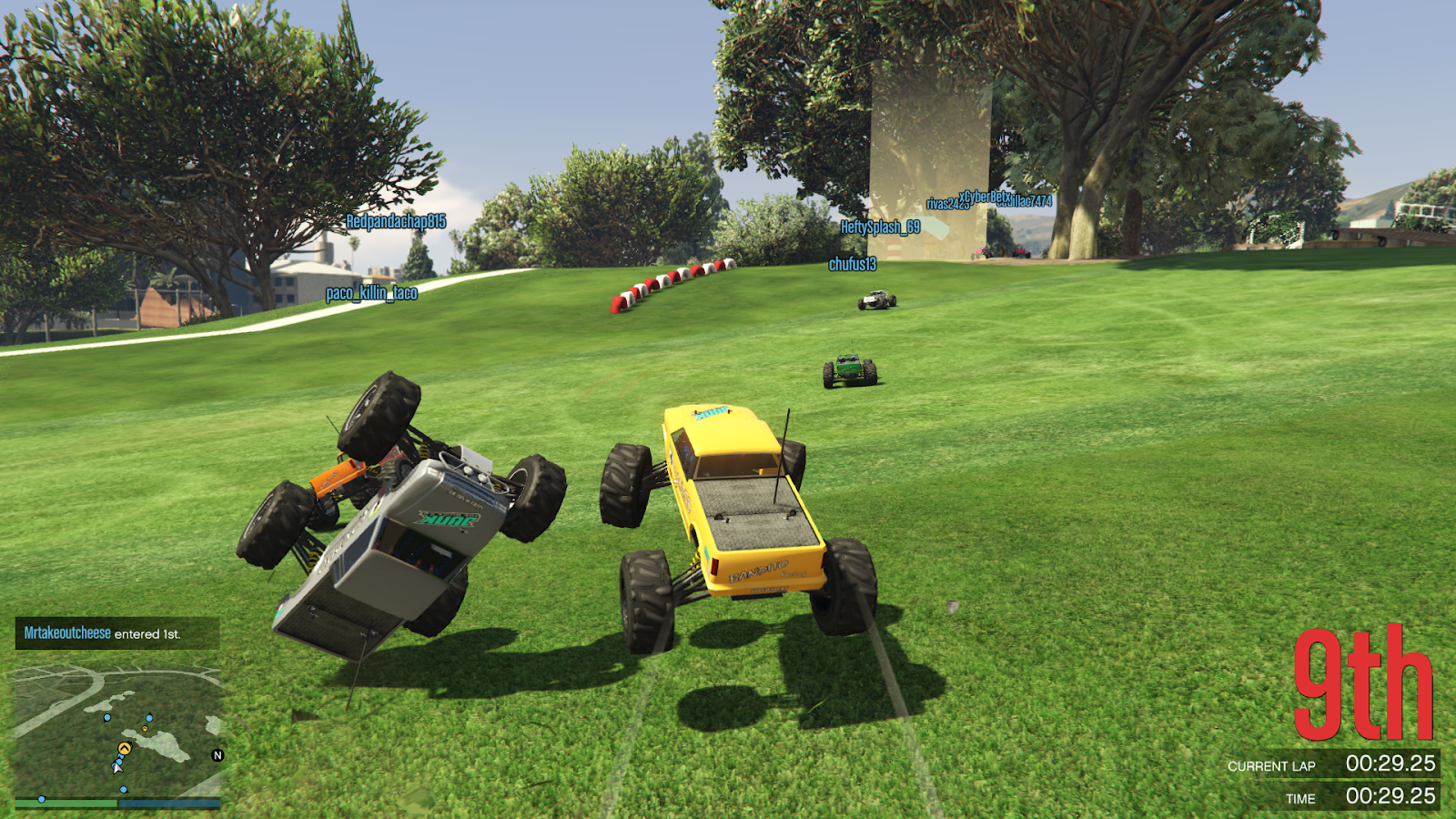 When I did make a mistake, it was disastrous. Even at slower speeds, the RC cars are very bumpy and prone to flipping over or spinning out. If I hit a wall or another car at a high rate of speed, my little RC car would fling off like a pinball.

This can become frustrating if it happens multiple times in one race, but luckily everyone else is flying around too. In races with 10 or more players, the track often looks like a bunch of kids left their Hot Wheels cars laying out after playing with them.

I also really enjoy the lobby screen before the race starts. Usually the screen shows players grouped around a car. But in the RC car races, players wearing full racing gear and helmets are grouped around tiny remote controlled cars. It makes me laugh each time the lobby loads. 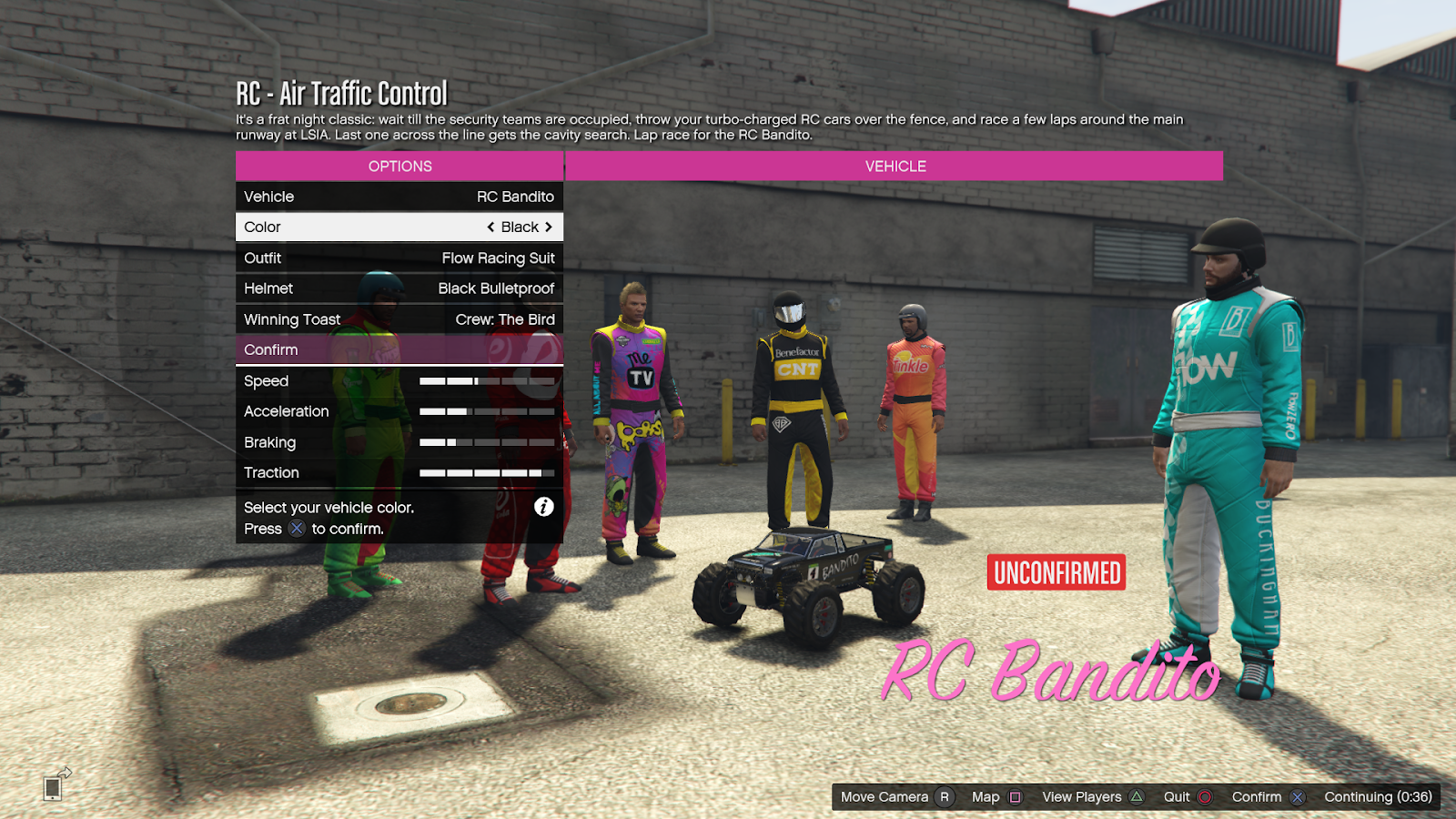 The whole mode feels funny. I was surprised at how many players I encountered online who were just laughing and having a good time. I usually end up muting most players in GTA Online because all they do is yell or complain constantly, usually using toxic language and slurs.

However, I had a much different experience in my RC car races. Players were laughing and talking about how absurd the RC cars were. The mode just has a more playful and fun vibe than previous racing modes.

If you really enjoy driving the RC Bandito in races, you can buy the RC car and take it out around the city and desert of GTA Online. Though it isn’t cheap: The RC car in GTA Online cost over $1.5 million. Once players have shelled over a million bucks to buy the RC car, they can customise it, give it the ability to jump or even add explosives to it.

This is GTA Online, so of course you can add a bomb to it. Thankfully, you don’t need to buy the RC car to play the new races, which is nice because these new races are fun, but not $US1.5 ($2) million dollars worth of fun.

GTA Online has tried in the past to recreate the feeling of RC cars in its Tiny Racers mode, but that mode used a camera angle that made racing difficult and used normal-sized GTA Online cars, using the top down camera to make them look smaller.

These new RC car races feel much better, and I had a great time blasting around the tracks. I hope Rockstar adds more RC car tracks in the future. Maybe some RC boat or plane racing too?