agdq 2019hollow knightnintendo switchplaystation 4team cherryxbox one
To sign up for our daily newsletter covering the latest news, features and reviews, head HERE. For a running feed of all our stories, follow us on Twitter HERE. Or you can bookmark the Kotaku Australia homepage to visit whenever you need a news fix.

Hollow Knight is a quiet game of exploration and difficult bosses that can take dozens of hours to complete. Last Sunday at Awesome Games Done Quick, a speedrunner beat it in under 90 minutes. The run was a highlight of precise, masterful movement. And the ending had the audience on the edges of their seats.

The “true ending, no major glitches” run, which focused on smart navigation and not large segment-skipping glitches, was performed by Vysuals. Get Hollow Knight’s true ending requires finding theDream Nail and numerous other items within the game world. To reach them quickly, Vysuals relies on a variety of shortcuts based on clever gameplay, not bugs in the code.

In one instance, he allows himself to be killed, which leaves behind a shade that players can fight to retrieve lost items. But rather than do that, he uses the shade as a stepping stone to reach an otherwise-inaccessible endgame area.

Vysuals progresses through Hollow Knight in short order, collecting the required items needed for the game’s true ending. Then he heads for the bosses. First he defeats the Hollow Knight itself, leaping around into a spinning whirlwind of destruction. He then faces off against the true final boss, the Radiance. The Radiance does double damage with each hit, forcing Vysuals to dodge carefully.

Unfortunately, he gets hit enough times to leave himself with just one portion of health left before the final segment of the fight.

“Just a reminder, but what’s our policy on healing for this one?” asks a member of the couch commentary team. 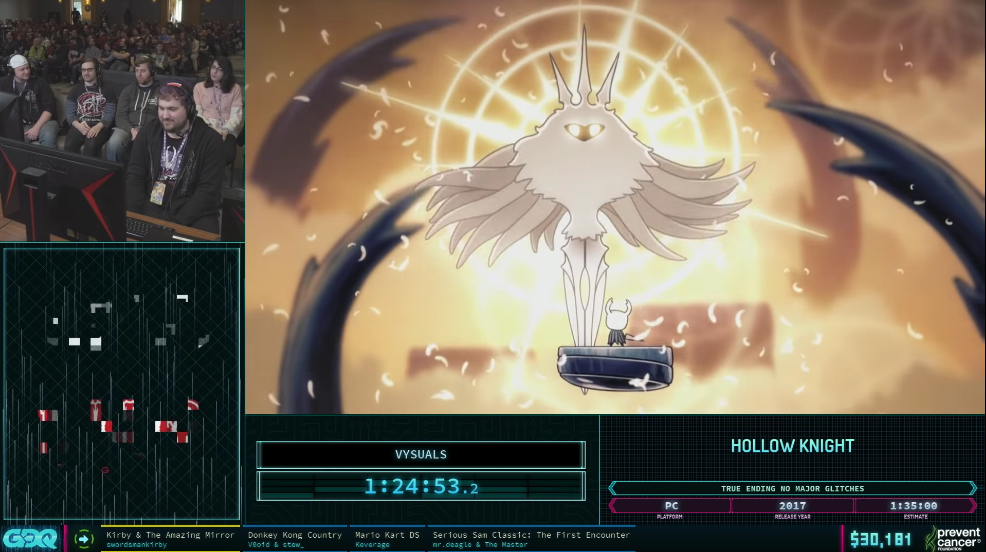 What follows is a complex section where Vysuals needs to climb up a series of platforms, surrounded by projectile attacks and massive energy beams, to reach the Radiance and land the final blows. A single hit means death and lost time; a misplaced jump means falling down from where he has climbed. It’s a tense fight, but he manages it, eliciting thunderous applause from the crowd.

Vysuals ends the run with a final time of 1 hour, 27 minutes, and 57 seconds. Afterward, he heads back and completes the “Path of Pain,” a brutal segment full of spikes and other hazards that’s a nod to ultra-hard platformers like Super Meat Boy. Taking hits in certain parts starts you back at the room’s entrance. Vysuals takes a few hits, but finishes the Path of Pain successfully.

Vysuals’ run showed Hollow Knight at its most technical, and is a must-watch highlight of this year’s AGDQ. Meanwhile, I’m still lost in the Fungal Wastes.