When Kingdom Hearts 3 leaked, creator Tetsuya Nomura said the biggest spoilers in the game were the game’s secret movie and epilogue. Earlier this month, Kotaku reported on how players can watch the epilogue, but the details for the secret movie were vague.

In a newly published Famitsu interview, Nomura explained how the secret movie can be unlocked.

Wednesday, January 30: Epilogue (video) *Players will need to have completed Kingdom Hearts 3 and seen the ending to view this video.

Thursday, January 31: Secret (video) *Players will need to have completed Kingdom Hearts 3 and seen the ending, as well as fulfilled certain criteria during play to view this video.

*The criteria vary depending on the difficulty level selected.

*The epilogue and secret movie are video content that will enhance player’s enjoyment of the world of Kingdom Hearts.

*The main game allows players to proceed to and view the ending without the need for an internet connection.

The epilogue plays after clearing the game. What exactly is that criteria for the secret movie? 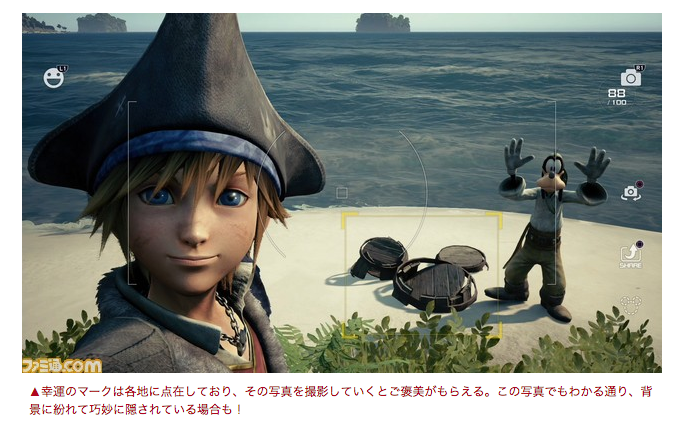 According to Nomura, to watch the secret movie, players need to photograph the in-game Mickey-shaped “lucky marks.” From what Famitsu’s article indicates, Sora seems to have a mobile device with which he can take photos of the lucky marks.

“The number (of lucky marks) you need to photograph varies depending on the difficulty selected at the game’s start,” Nomura told Famitsu. So, if you select the easy Beginner mode, you must photograph all the lucky marks. If you chose the harder Standard or Proud modes, then you can skip some. Nomura didn’t give exact numbers, but said, “For Proud, only a few [lucky marks] is ok, and even Standard isn’t that strict, I think.”

Again, Nomura didn’t give exact numbers, so it’s hard to know what the minimum number of lucky mark photos is. However, Nomura agreed that seeing the secret movie in KH3 was easier than in the past, and he’s announcing this info pre-release to make sure players can unlock the movie. He wants you to watch it!

Also in the interview, Nomura was asked about the leak. According to him, only four copies leaked, but he expressed his disappointment in the situation. “Because of what happened, the risks for a simultaneous worldwide release are high, for any games that I work on henceforth, currently I cannot help but reconsider a simultaneous worldwide release for at the very least the retail package version.”

Having post-release downloads was one to prevent those spoilers. Not releasing retail versions worldwide in advance is another.