Lately I’ve spent a lot of time in Final Fantasy XIV, Square Enix’s most recent massive multiplayer entry into the legendary game series. Often that means running dungeons for loot or fighting difficult bosses. Yesterday, it meant accidentally becoming a paid fortune teller in one of the game’s bustling metropolises.

There are numerous servers to play on in Final Fantasy XIV. I play on Balmung, a “legacy” server that’s been around since the game’s initially disastrous launch. It’s massive, with so many players that the game currently doesn’t allow you to make new characters on it.

It’s also well-known as a haven for roleplayers, who act in-character as their various mages, warriors, and artisans. In the broader community, there’s a stigma that roleplaying servers are all about cybersex—that exists, certainly, but Balmung is mostly about creativity and large community events.

It’s a unique space, which is how I suddenly found myself telling fortunes on the street of Ul’dah, one of the game’s starting cities.

I usually play as a White Mage, a healing class, and have a lot of fun. But there are a few other healing professions as well, such as the Astrologian, added in the 2015 expansion Heavensward.

They’re a sort of star magician, using the power of constellations and a deck of card to boost allies. In combat, they can draw randomly from a deck of six cards, each granting a special effect. Some decrease the amount of damage your character takes, some reduce the MP cost of spells. I decided to put those cards to a different use when playing an Astrologian.

For fun, my character, a kind healer, took up a slightly risque street performer outfit (featuring a hat I’d earned from a large group raid) and set up near the city entrance. I announced in chat that I was giving free fortune readings, and a crowd slowly gathered. 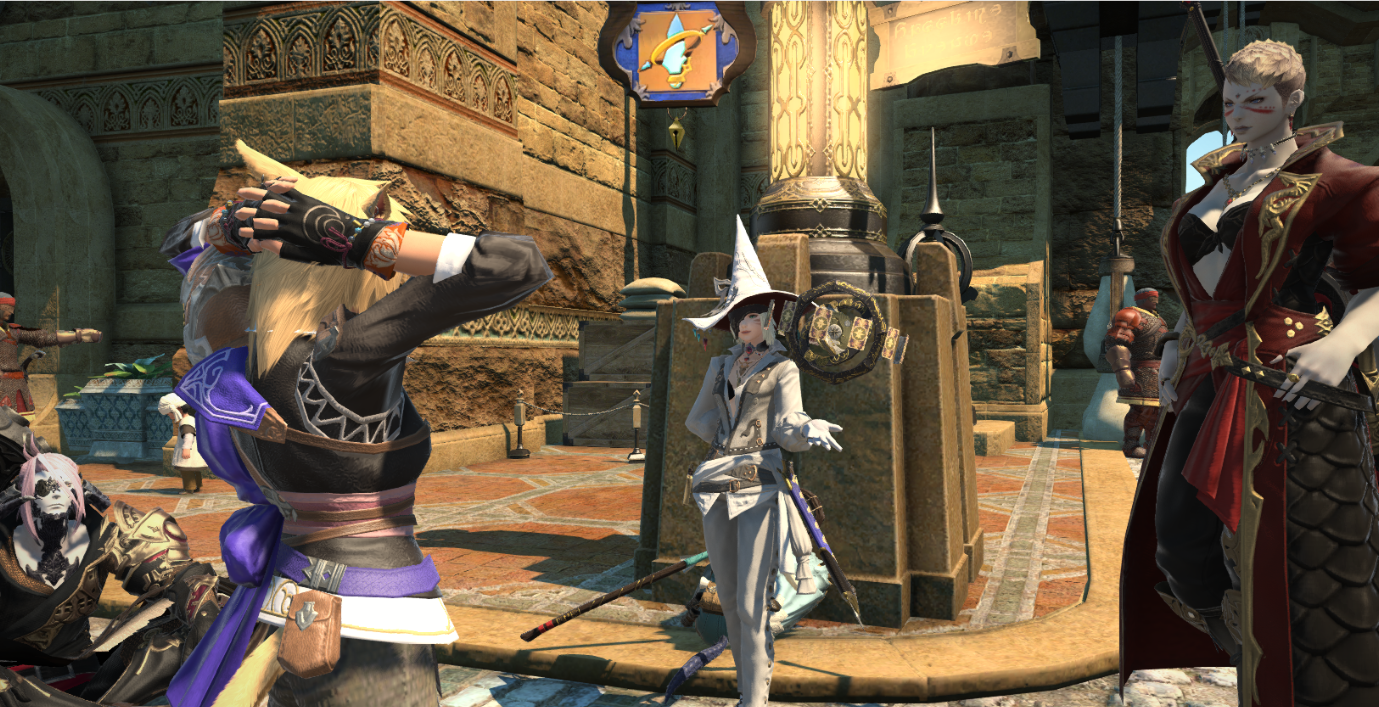 I kept to a simple three card spread for past, present, and future. I used my draw ability—usually reserved for combat—to pull a random card. From there, I would offer an interpretation over chat. Let’s say I drew the Bole, a card representing the tree of life and which decreases the damage teammates take in battle. If I drew that in the future slot, I might say something like this:

“The Bole! A card of stability, growth, and prosperity. It represents the trunk of the World Tree, planted by the Matron goddess Nophica. Your future endeavours will be fruitful. If you’ve not already embarked on new challenges, consider the tasks you’ve been meaning to complete. Embrace hard work and pour yourself into the pursuit. You’ll not only find material success but personal growth.”

That might sound a little vague, but real life tarot reading is also about allowing people to fill in the gaps. While some might see it as a swindle, my understanding is that a tarot reading is treated less as a foolproof read into the future and more like a sort of meditative tool.

The cards are meant to encourage self-reflection. I’ve had personal experience with tarot read, both thanks to my co-worker Gita Jackson’s love of things like astrology and the tarot phone app Golden Thread and a live-streamed tarot reading I got with Cecilia and our at-the-time social media manager Alex Bedder. The reader at that event was an awkward individual, but I observed their work eagerly.

Often, they did not try to offer specifics, although they took some guesses from time to time.

I took a similar approach here. I let people know I was not predicting the future, but helping them choose their path. Whether in-character or out, I only offered small suggestions. Consider taking a trip; maybe try a new crafting class. Oh my, this card signals trouble in your past. Do not blame yourself, the fault was in others.

If I drew the Arrow card, I would suggest moving confidently forward in life while embracing chaos as well. After all, arrows don’t control where they fly once fired.

I imagined this would be a silly New Year’s diversion, and I told people that there was no fee for readings. As a result, I had quite a crowd and told a lot of fortunes. I would end by reminding people that tips were appreciated but not necessary. I was simply glad to offer a diversion and some guidance.

Even so, players started to tip me gil, the game’s currency. I thought the tips would be small. 1,000 gil out of pity, maybe 5,000 for kicks. But they ended up larger than I expected. One player—someone who had almost certainly never roleplayed before—gave me 28,000 gil. After offering an in-depth reading to a couple, each tipped me 100,000 gil. By the end of the afternoon, I had made a little more than a quarter million in tips.

Balmung’s status as legacy server means that there’s a lot of spare money in our economy, and the tight-knit community led to a lot of generosity. It’s not a massive amount of gil, but it’s a lot considering I expected to walk away with nothing.

I thought my fortune telling might be a one-time thing, but I’m probably going to find one day a week to sit for a few hours and tell people their fortune. Maybe it will encourage them to try new things, or guide their roleplaying in new directions.

The process was fun and rewarding, even if I was feeling pretty tired by the end of it. And with world-visits coming in the next update, which allow players on the same data centre to travel between servers, there will be plenty of players to entertain.