Ever since the mystery game Danganronpa: Trigger Happy Havoc came out in 2010, my friends have tried to convince me to play it by comparing it to other mystery games like Phoenix Wright Ace Attorney, and even to role-playing games like Persona 5.

Now that I’m finally playing it on the PlayStation Vita, I’ve come to think of it as a murder-infused dating sim, one where my skills playing games of romance are now helping me catch some killers.

Danganronpa shares its grisly premise with movies like Battle Royale and Hunger Games. It starts with 15 adorable and quirky teenagers getting locked in a building and told that the only way out is to murder one another. There’s a further level of difficulty, though, which is that each murder need to be pinned on someone who didn’t do it. That’s a lot to ask of these poor teens, but several rise to the occasion. It’s my job as the game’s hero, Makoto, to figure out which ones.

Makoto characterises himself at the outset as being unremarkable, except that he has uncannily good luck; perhaps that good luck will help him survive this bizarre scenario intact. All of the other teens have something special and very noticeable about them; one is a baseball expert, another a rich heir to a corporate empire, another a famous pop singer, and so on.

Since I’m the hero, I assume that my character will survive until the end of this game and won’t kill anyone. So far, Makoto has just been solving murders, not doing them. I have to figure out which of these other teenagers are planning murders so that I can discover them and prevent them from winning.

Like a reality show contestant who is “not here to make friends,” I dove into this game with a hardened and manipulative heart—the heart of a dating sim player who knows how to hit her head against a series of repetitive dialogue choices until she gets the results that she wants.

Just like in any dating sim, I have to keep track of all these characters’ quirks, remember their backstories, and of course, talk to every single one of them over and over again until I learn what makes them tick. In a dating sim, I always do this with a manipulative goal in mind: I want to date every single character so that I can see every possible ending, and I keep talking to certain characters until I get the results that I want.

It always feels like a gross misrepresentation of how romance should ever work in real life. But in Danganronpa, this manipulative approach to playing a game finally fits the situation that my hero happens to be in. It is exactly what he should do.

Either way, it’s a sign for me to put my dating sim hat on and pay very close attention to every dialogue response that character may throw at me, searching for clues that will eventually allow me to wring a confession out of them. It’s almost identical to the way that I might wring a date out of someone in a dating sim, except again, in this game, the manipulative tactics feel a lot more appropriate.

Danganronpa even includes a shop with a slot machine that has gifts inside of it, gifts that you’re supposed to give to certain characters in order to win them over and impress them. As soon as I won some fortune-telling themed glasses, I saved them in my inventory for the next time I talked to Hiro, the character who loves the occult.

Just as I expected, he loved them, but of course I’m only giving him those glasses to butter him up. My reward for giving a character a gift they like is a slightly different ending to our conversation—more fodder for me to hyper-analyse. If this gift-giving thing isn’t a dating sim mechanic, I don’t know what is! 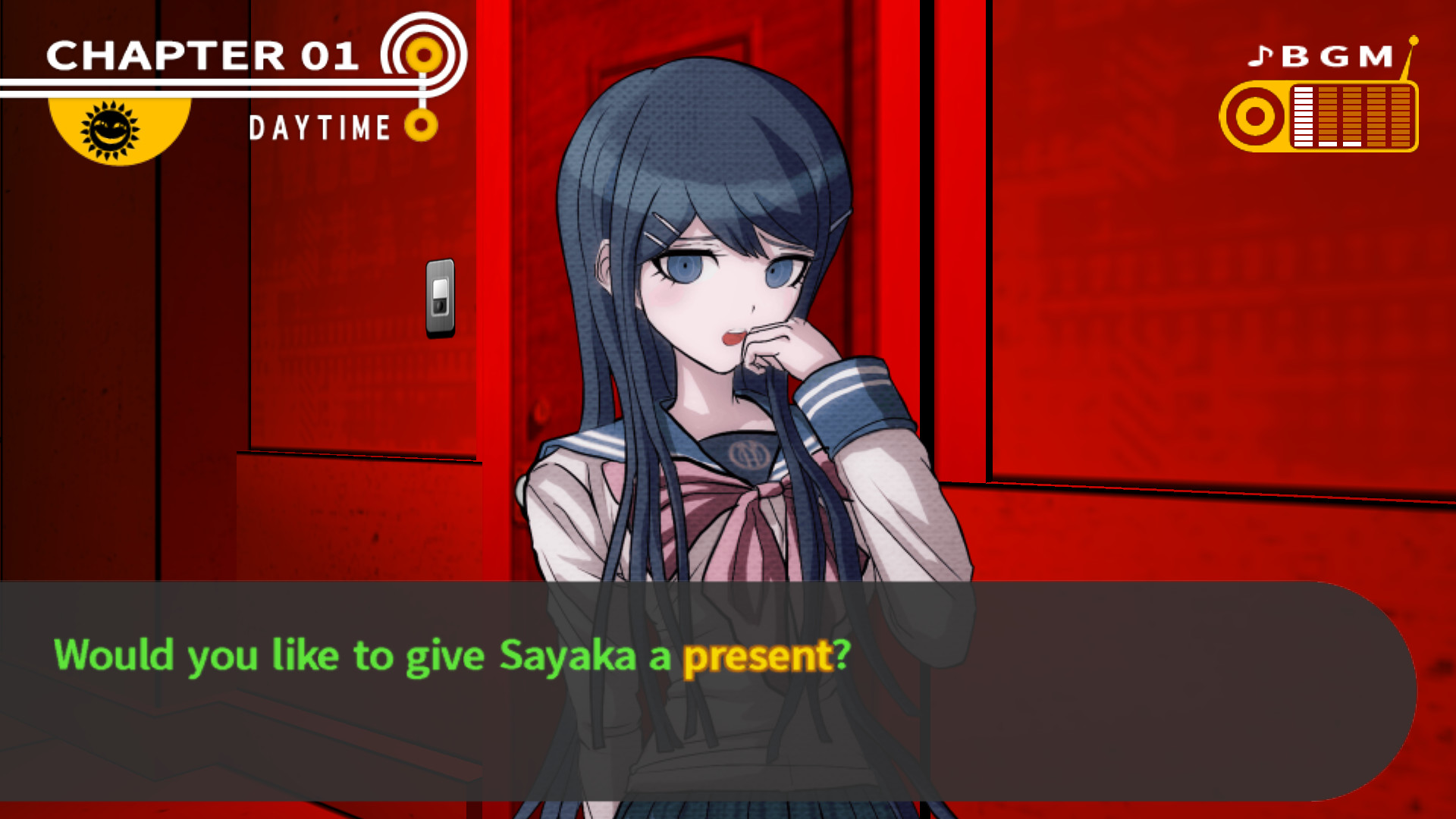 Early on in Danganronpa, the game’s narrative shuffles your teen boy protagonist into the waiting arms of Sayaka Maizono. Before she got kidnapped for the murder game, Sayaka already had a very successful career for someone so young: she’s a famous idol singer. It also just so happens that Sayaka went to the same middle school as our hero, and the two apparently harbored secret crushy feelings on each other at that time. Now that we’re locked together in a murder maze, of course that romance is going to blossom.

If this were a dating sim, then I know what type of role Sayaka will play. She’s the obvious “Route A” candidate: The boring first choice of love interest, the one that you pick for your initial play-through just to see the main story beats on offer before you circle back around and choose someone more interesting on your next play-through. But I know Danganronpa is a murderous version of a dating sim.

Instead of assuming that Sayaka would be my first girlfriend — which, ironically, is exactly what Danganronpa wanted me to think — I assumed she would end up playing an important role in the first murder of the game. Maybe she’d be the killer, maybe she’d be killed, or maybe she’d be framed and I’d have to figure out what really happened.

I won’t reveal which of those is the case, especially since there are many twists along the way, but I ended up being able to guess those twists because of the cynical lens through which I had read all of the dialogue throughout. I got to feel like a super mega genius.

Now I know I’m right to play the game with the mindset that I’ve been using. Finally, all those dating sim skills are paying off for me, and in a place I did not expect.