Marvel Is Setting Up A Timely, Fascinating Resurgence For Namor The Sub-Mariner 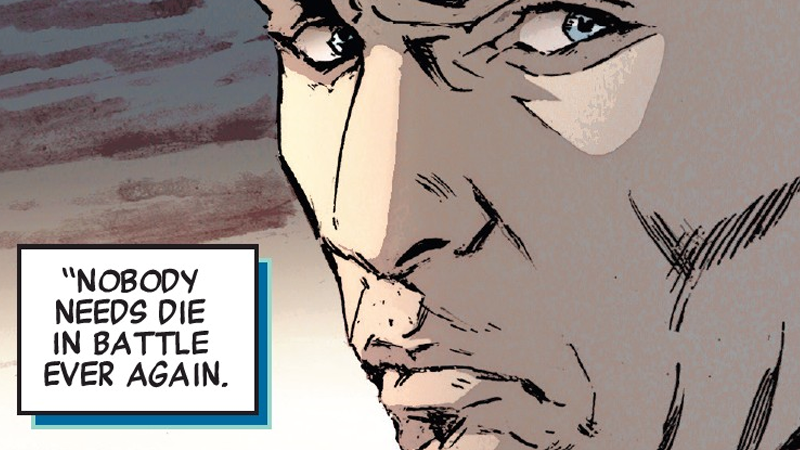 Beneath the tides of Hollywood and back in the realm of comic books, however — and at DC’s rival Marvel — another King of Atlantis is undergoing a similar ascendance. Namor’s back, and he’s more intriguing than ever.

Despite having the legacy of being one of Marvel’s oldest surviving characters (dating back to even the earliest history in the golden age of comics as Timely), in recent years Namor’s been a character that skulks about in the background—a shadowy team-up here, a being-dead-for-a-bit there. You know, the usual comic book stuff.

But in the past few months, Namor’s been slowly … err, making waves again. But his return to prominence isn’t quite as a hero of the land and sea. Instead, it’s as a potentially major problem for Earth’s mightiest heroes and the entire surface world.

Throughout the pages of Avengers, last year’s Defenders crossover mini-event “The Best Defence,” and now the new Invaders series from Chip Zdarsky, Carlos Magno, Butch Guice, Alex Guimaraes, and Travis Lanham, Namor has slowly been re-positioned as an ever-growing threat to the surface world.

No longer content to stay within the confines of Atlantis and keep his rule to himself, a series of humbling setbacks has led Namor to take up a much harsher position to protect his kingdom and the planet at large from certain doom.

He was strong-armed into capitulating with the Hydra-brainwashed Captain America during Secret Empire, and ongoing environmental concerns set back Atlantis’ reconstruction in the wake of its own retaliatory conflict with Wakanda after Avengers vs. X-Men years ago.

Now, Atlantis needs a king that is proactive and willing to take the fight directly to the massive environmental threat the surface world represents, as it heats its oceans and pollutes its waters at an unprecedented rate. 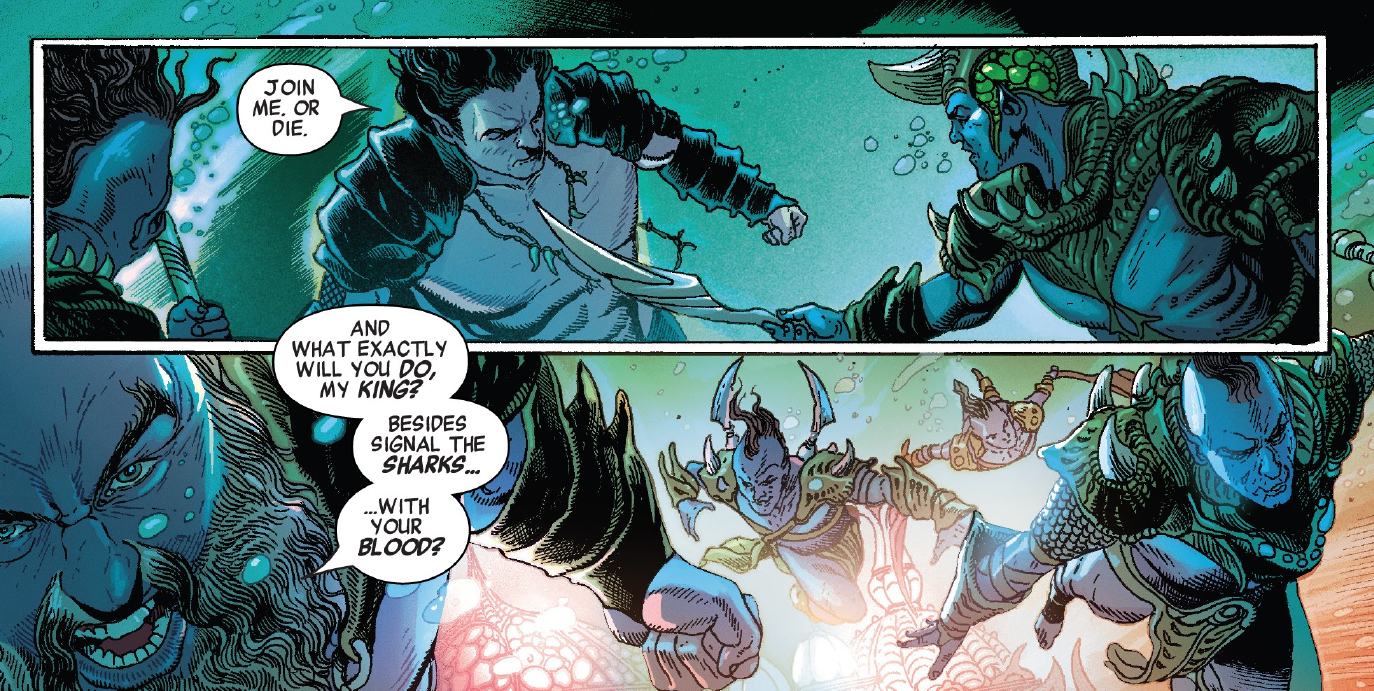 In a lot of ways, there are parallels between the story that Namor is going through now and Orm’s arc in the Aquaman movie — although it’s more down to a coincidence rather than any particular comics-based-Atlantean beef there might ever be between DC and Marvel (what an oddly specific beef that would be!).

Namor, just as Orm was in Aquaman, is going around the disparate kingdoms previously united as part of Atlantis’ vast empire in an attempt to reform alliances that could crush the surface world for good. Just like Orm, he’s doing it in an arrogant way, riding in as the impetuous king that demands fealty or death, and only then attempting diplomacy should he be rebuked.

And, similar to what Orm was purportedly doing, Namor has ecological reasons for his actions—global warming isn’t just damaging the atmosphere of the surface world, but bringing great harm to the oceans, and as humans greedily capitulate on how to stop it, the underwater world is facing catastrophic threats to its existence.

If humans won’t bother saving themselves from climate change, Namor figures, he’ll do it himself … by wiping them off the board before a melting icecap can. He cares about the environment, at least! 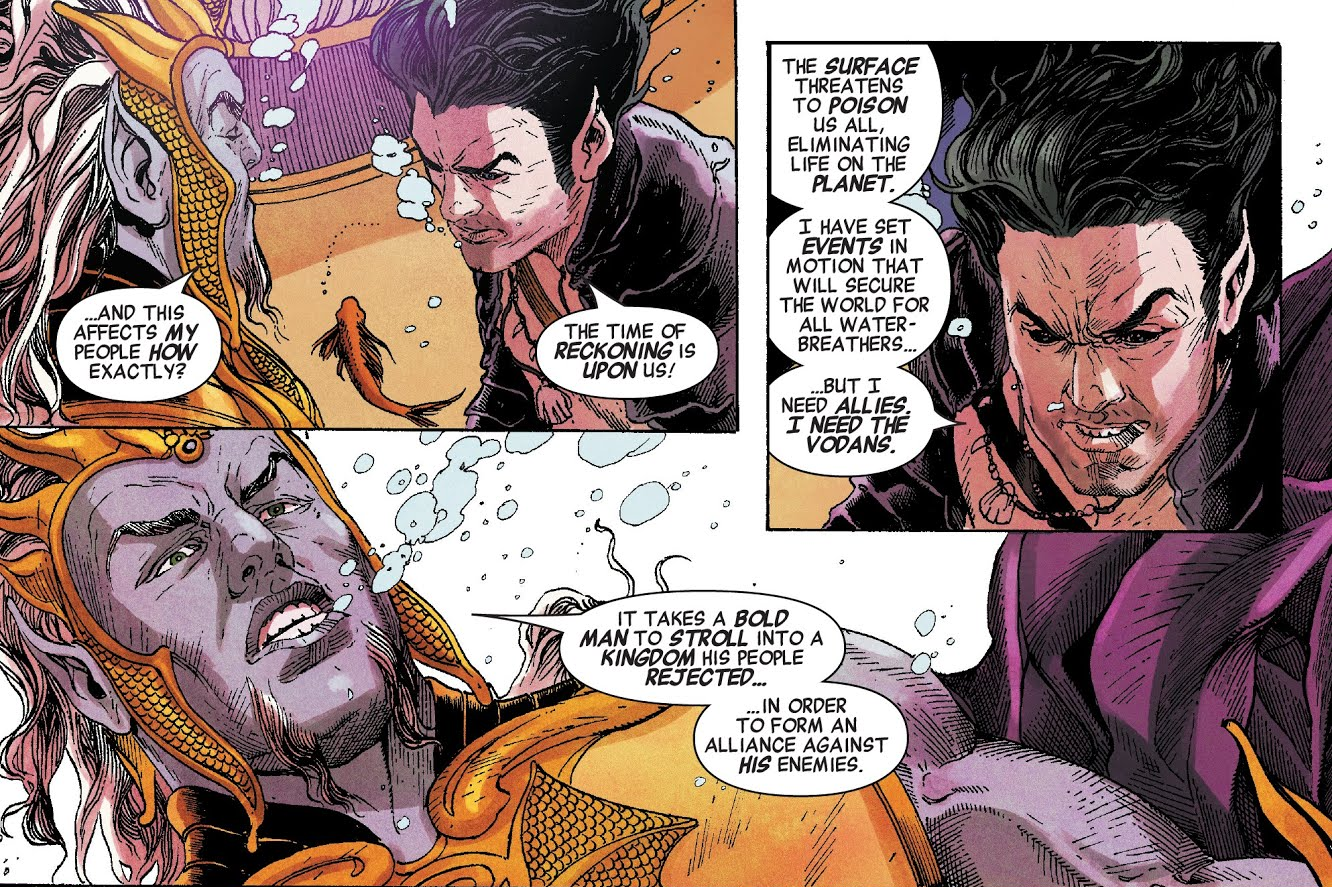 Namor begs for allies with the King of the Vodans in Namor: The Best Defense. (Image: Carlos Magno, Ian Herring, and Travis Lanham, Marvel Comics)

But while Aquaman eventually cast Orm’s desire for pro-ecological warfare against humanity as a pretense for his own greed — and kind of brushed aside that he sorta had a point about the whole global warming thing — Namor’s journey has started to differentiate from that of his fellow oceanic monarch, and it’s what ties him closer to Orm’s half-brother, Aquaman.

Because so far at least, Namor’s half-human heritage — and the haunted memories of Namor’s earliest adventures in comics — seem to have had an incredibly traumatic impact on the king, and the reasons that Namor is wildly fighting to save the planet from humanity’s ignorance have much deeper ties than him just wanting to keep to Atlantis’ business. In fact, it has ties stretching all the way back to Namor’s earliest years of existence in comics.

As a character created in 1939, Namor’s early years were naturally dominated by the outbreak of World War II — and despite being a fantastical underwater superhero, that didn’t stop him from punching a Nazi or 70 throughout the war.

But although Namor vanished into the ether in the decline of the golden age (only to return once Timely had rebranded as Marvel), it wasn’t until 1969 that Marvel re-invigorated the character’s roots as a wartime superhero by retconning him as having fought alongside Captain America, the original Human Torch, and Bucky Barnes as a member of the World War superteam the Invaders.

That’s now a firmly established part of Namor’s Marvel backstory, but in this latest iteration of The Invaders — launching in a banner 80th anniversary year for Marvel — the horror of fighting in a global conflict like World War II is seemingly finally catching up with the Sub-Mariner. 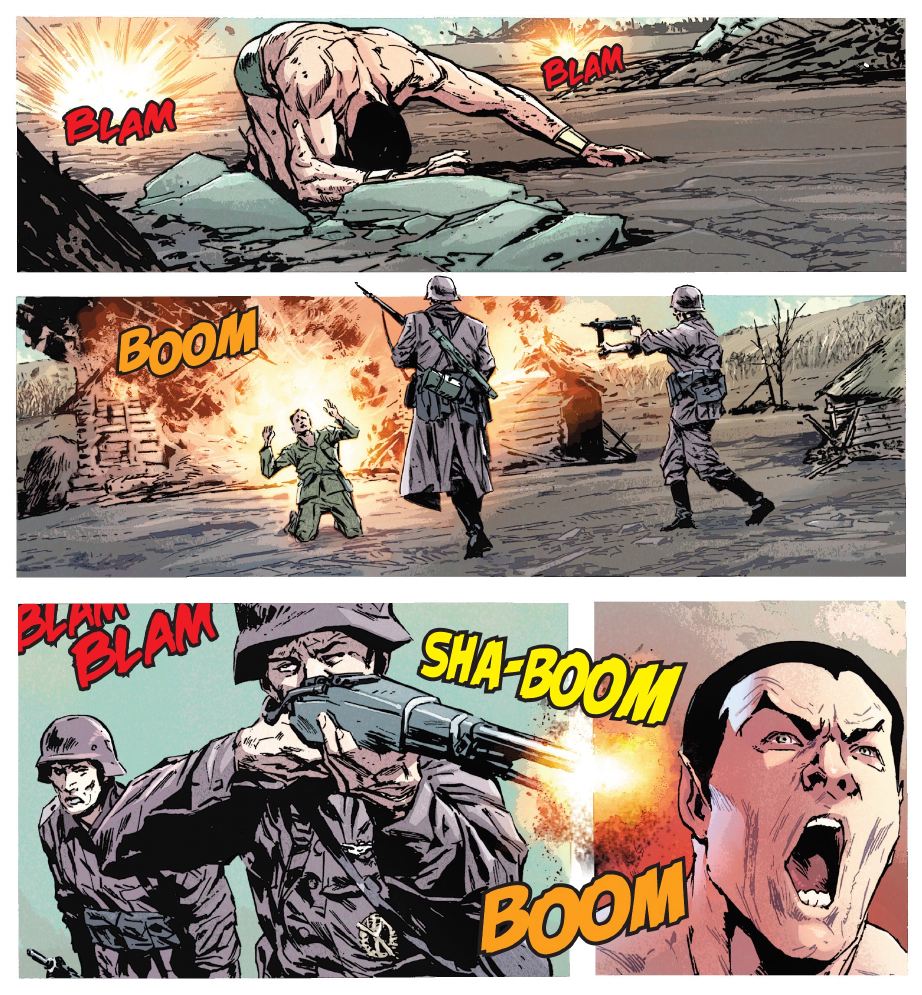 A weakened Namor arrives too late to save his friend. (Image: Butch Guice, Alex Guimaraes, and Travis Lanham, Marvel Comics)

We saw flashes of it in the pages of Namor’s Defenders: The Best Defence one-shot, but the recently-released first issue of the new Invaders really begins to make explicit just what a terrible impact the war has wracked upon the man seemingly so arrogant to cry out his status as a commanding ruler — it’s not exactly proper Latin, but “Imperius Rex!” has roots in that sort of translation — as his motto.

Throughout Invaders #1, even as Captain America begins to call in Bucky on “Invaders” business in an attempt to either convince their former teammate to stand down or be stopped — as Namor himself goes about recruiting more undersea factions for his war against humanity — we repeatedly flash back to World War II. And in doing so, we see a Namor more conflicted and tortured than we’ve seen in a while.

At first, it’s a stark contrast to the imposing, threatening Namor we see in the present—the Namor we see fighting in the war is debilitated, in part by having to exert himself without access to the water that gives him his superhuman strengths.

But most importantly he’s debilitated by the loss of people around him — soldiers die, friends die, and for all the good that extraordinary people like Namor, Cap, and the Human Torch are doing, it’s never enough to save everyone. 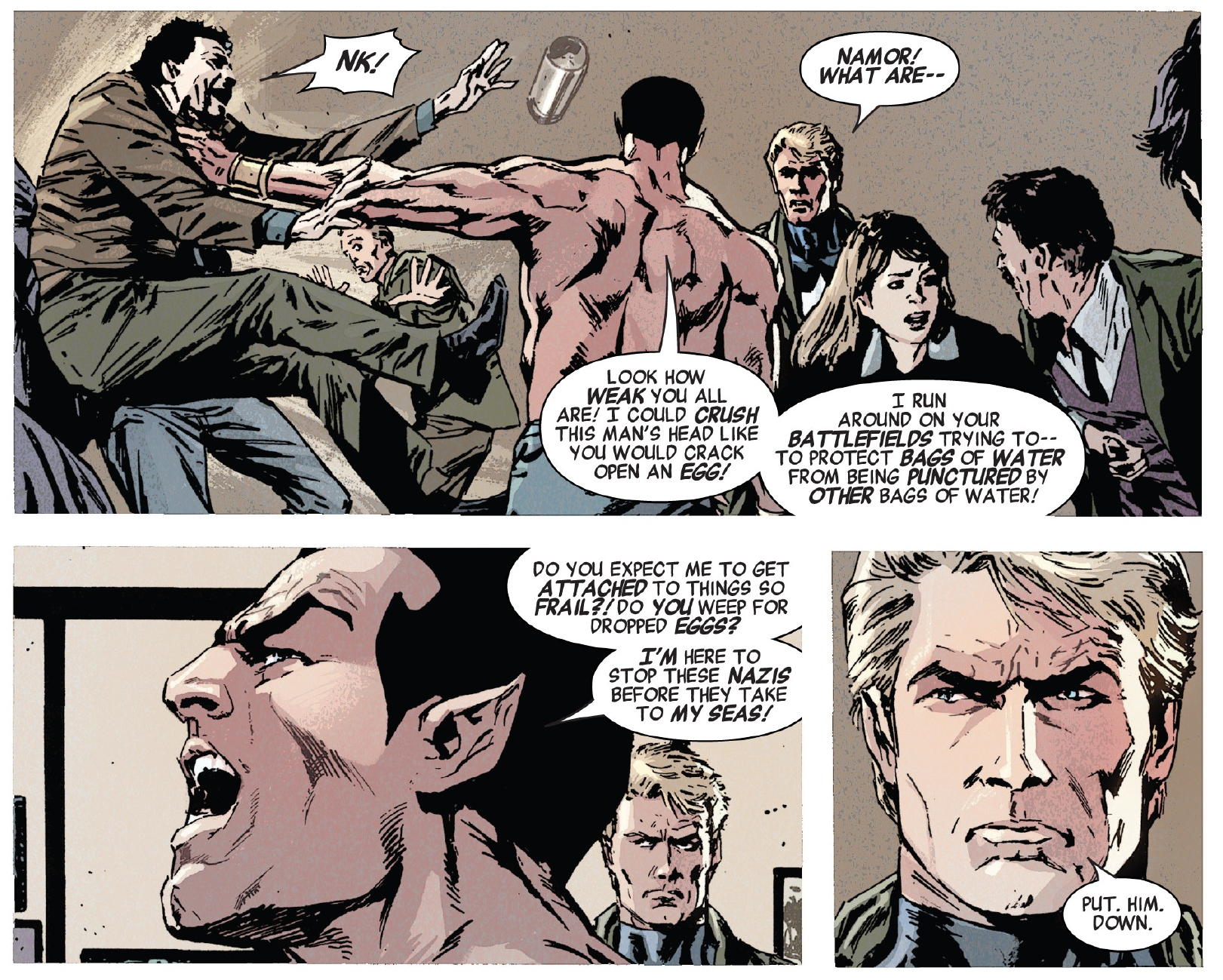 Steve and Namor butt heads over how the latter is choosing to grieve for Tommy. (Image: Butch Guice, Alex Guimaraes, and Travis Lanham, Marvel Comics)

When a young soldier named Tommy is killed before the weakened Namor can save him, we see what seems to be a breaking point for the Sub-Mariner’s spirit. While he puts on the facade of arrogance we know Namor for, celebrating after the battle, it’s clear when Captain America confronts him about attending a funeral service for the soldiers who died that deep down Namor’s human side is deeply aching for the losses he’s gone through, even if he won’t openly admit it.

As Invaders #1 concludes, and Namor’s memories flash back to Tommy’s memorial, we hear him express a desire to see no one else die on his watch — only to come back to the Namor of the present, having nearly wiped out a swathe of rogue Atlanteans he’s attempting to rally to his cause, talking to himself, seemingly chasing the ghosts of his own history.

But this time, he’s not fighting against something as easy to confront as an army of Nazi warmongers — he’s fighting for an existential crisis affecting the planet itself. 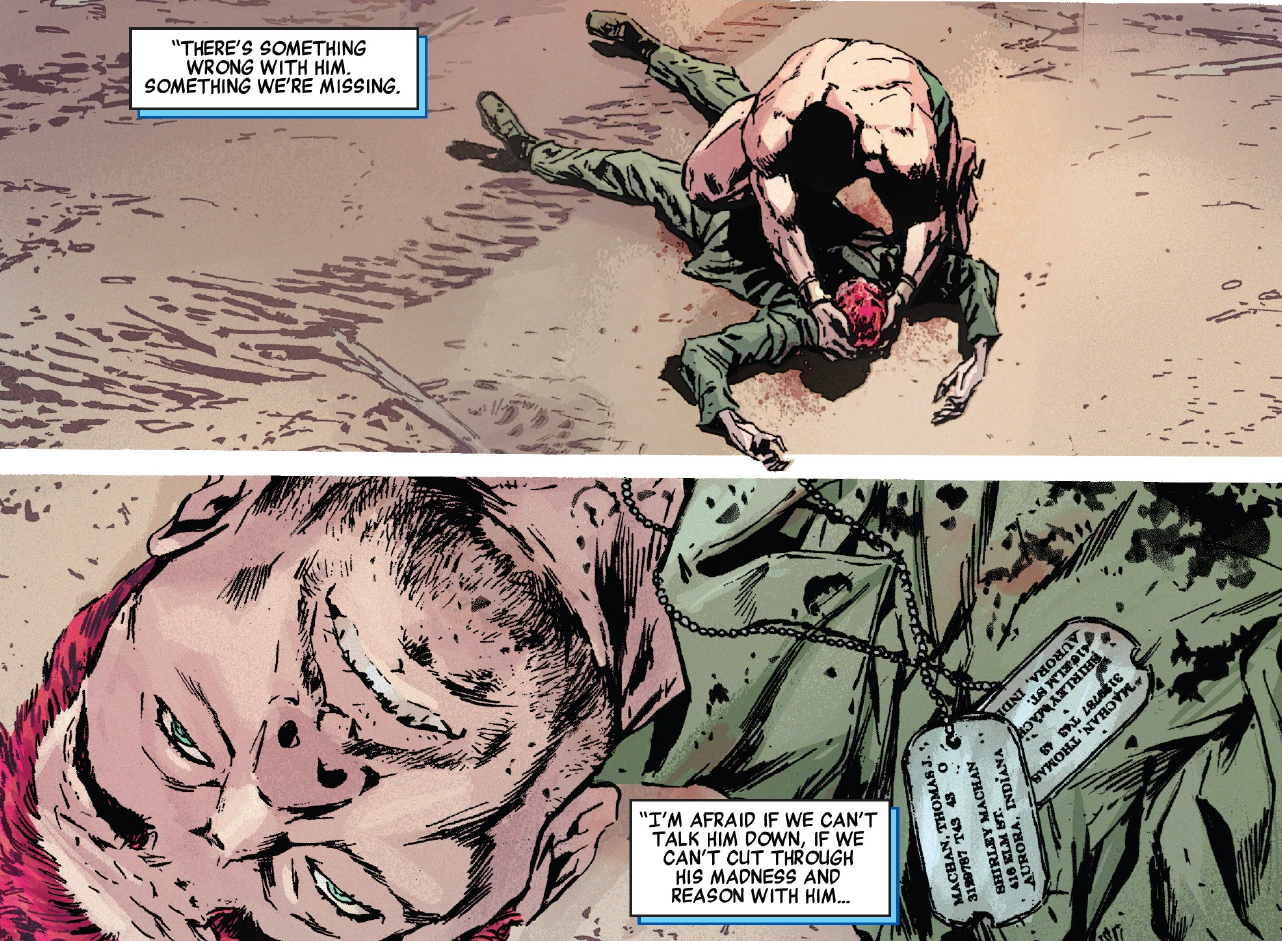 In the past, Namor’s testy relationship with the surface world—and the threats of war between him and his former heroic allies — have painted the King as an arrogant villain at worst, and a dark-edged anti-hero at best. But this latest resurgence in prominence is making him feel more human than he has in a long time.

It’s almost fitting that while Aquaman soars to new heights in the cinematic universe, his long-time mirror at Marvel is setting the stage for a prominence he’s not had for a good while.