In March 2017, an Overwatch fan wrote to Jeff Kaplan about the lack of black female characters in the game. To her surprise, he wrote back a few months later, saying he hoped that one day diversity would be the norm and promising that there were multiple black characters in the works.

“The most important thing to me is that those in positions to influence and reflect society start portraying very normal things as being normal,” Kaplan wrote.

“Right now, it makes ripple effects when we feature characters of different backgrounds. It’s a big deal when we reveal a hero is a lesbian. But I long for the day when it’s not a big deal. It needs to not be newsworthy. We need to help normal be normal.

“P.S., we have multiple Black characters in development,” he added. “One of them is coming soon.” That character would end up being Doomfist.

Vivian Phillips is a 23-year-old black woman going to college in Atlanta. Some of her earliest memories are of playing games with her father, specifically Baldur’s Gate and Fallout 2. “He would customise the character to look like me,” Phillips told Kotaku over the phone in November.

“He’d let me choose the dialogue choices or really important narrative choices and we got to some really interesting places. It was a really great bonding experience.” Her love of games grew as she got older, though she only happened upon Overwatch by chance.

She wasn’t a huge fan of Blizzard’s other games, so when Overwatch was announced, at first she wasn’t that enthused. Then she saw a screenshot of Symmetra.

“You could tell she was this regal, dark-skinned Indian woman. There was no racial ambiguity,” Phillips said. “I was like, ‘Wow, maybe I should check out Overwatch, see what’s going on.’” 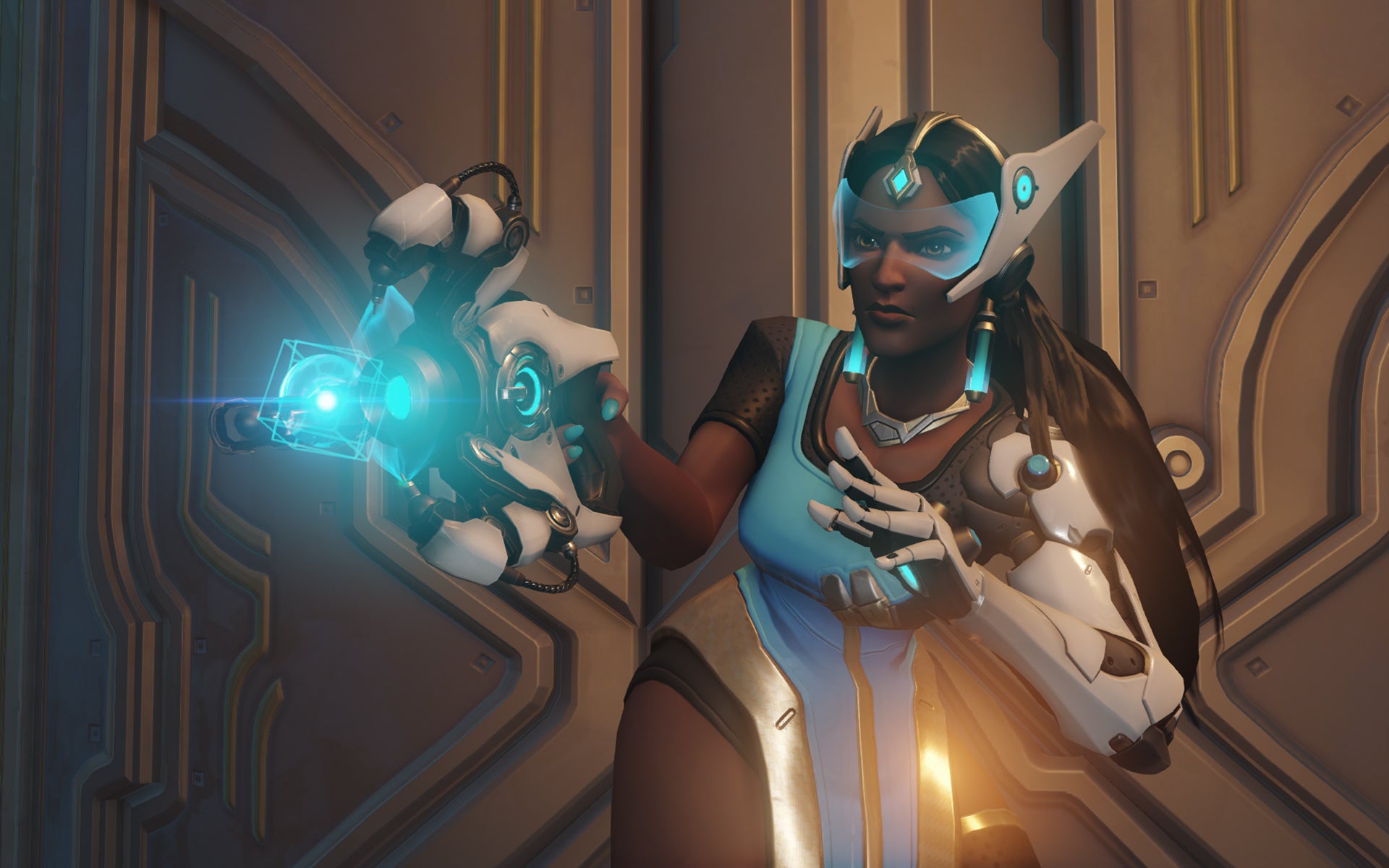 Dark-skinned women of any race are a rarity in games. As a mixed race black and Indian woman, seeing Symmetra was similarly inspiring to me, and led to me taking a chance on Overwatch, which is not the kind of game I usually play. Sometimes when you see a brown woman in a video game, you want to show the developers that brown-skinned women are out here, we see what they’re doing, and we appreciate it.

“When I saw Symmetra, when I saw Pharah, I was thinking, ‘OK, maybe there is a change happening in the gaming industry,’” Phillips said. “As a black female gamer, I have not seen many black women in leading roles. They were usually a just a sidekick or an NPC.” Seeing other characters of other ethnicities gave her hope that this might be a game where she saw a black female character in a leading role.

When Blizzard started teasing their 27th hero, Phillips went to the Blizzard forums to share her hope that it might be a black woman. Not just an Indian woman, like Symmetra, or an Egyptian Arab woman, like Pharah, but a black female character who would represent her. Previous Overwatch characters might have had her skintone, but they didn’t feel like they came from her cultural background.

Fans have talked about the lack of a black female character in Overwatch for a while, though it reached a head when Ashe was announced last year. “I was like, ‘Hey, wouldn’t it be cool if it was a black woman?’” Phillips said.

“I got very vitriolic, hateful comments, like, ‘Black people always bring up race! What does the race of a person have to do with it?’”

Here’s what the race of a person has to do with it: even within our own culture, black women feel overlooked and forgotten. We’re so used to being ignored, that when any piece of media makes gestures towards diversity, we hope and hope that black women will be included in that.

Too often, the shows and movies we watch or the games we play come up short. Black men are thought to stand in for the entirety of the black experience, but that’s just not true. In video games, I’ve noticed that usually there’s room for a white woman and a black man, but almost never a black woman.

Blackness is defined through a series of cultural markers, among them dark skin, broad noses, and kinky hair, as well as a shared cultural history of freedom from bondage. Broadly, you could define blackness as the diaspora of people displaced from Africa through the slave trade, though that doesn’t account for everyone. Blackness is more about how you are seen than how you are.

To be seen as black allows people to treat you in a certain way. No matter who I marry and have kids with, of whatever ethnicity, my children are going to inherit the markers that will deem them to the world at large as black. I would be disappointed if I had a daughter who could only see narratives about blackness through the eyes of black men, just as I have had to do for my entire life. And I would be disappointed if black women continued to be overlooked in a game with a cast as diverse as Overwatch’s.

It’s in that spirit that Phillips eventually ended up writing to Jeff Kaplan about her desire to see a playable black female character in Overwatch. “One of my favourite authors Junot Diaz said: “You know how vampires have no reflections in the mirror? If you want to make a human being a monster, deny them, at the cultural level, any reflection of themselves,’” she wrote.

“Socially, I’ve felt like a monster, Mr. Kaplan. I can only name three Black females that’ve been leads in a video game: Clementine from [The Walking Dead], Nilin from Remember Me, and Rochelle from Left 4 Dead. But worst was my acceptance of it.” 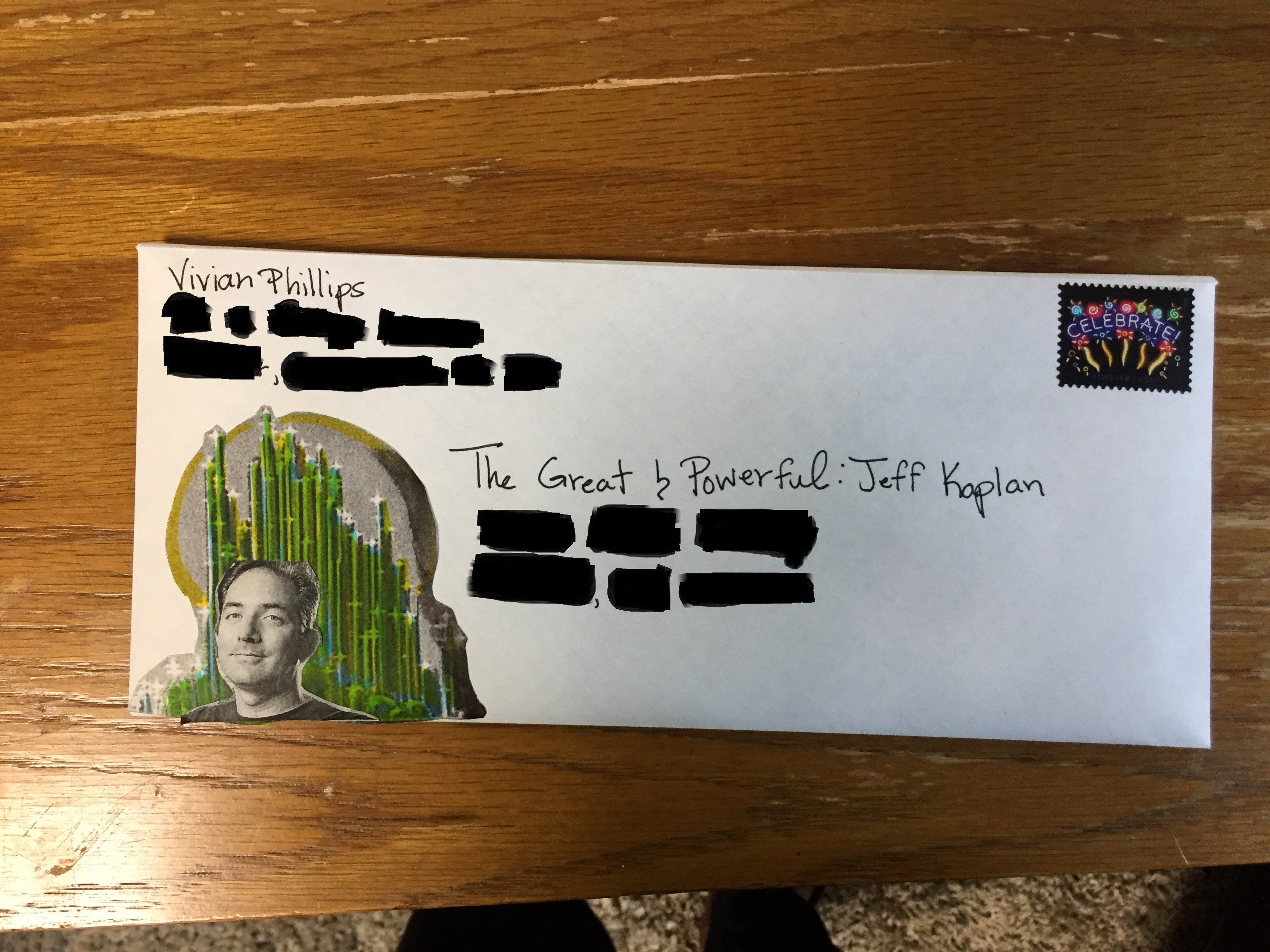 In her letter, Vivian compared Kaplan to the Wizard of Oz, making announcement from inside his Emerald City, and decorated her envelope hoping to catch his attention. (Photo: Vivian Phillips)

“My acceptance that even if the game has a custom character creator, a white male model will be used in the commercials to sell me the game. My acceptance that a Black character regardless of gender will most likely be the sidekick of the franchise,” she continued. “My acceptance that video game developers will often make me choose my race or my gender when talking about a ‘diversifying’ character, and never thinking about combining the two.”

Two months later, Phillips got a package. The return address was from Irvine, California. When she opened it, she found some cute stickers of the Overwatch hero Orisa, some Blizzard logos, and a letter addressed to her personally.

It was from Jeff Kaplan. 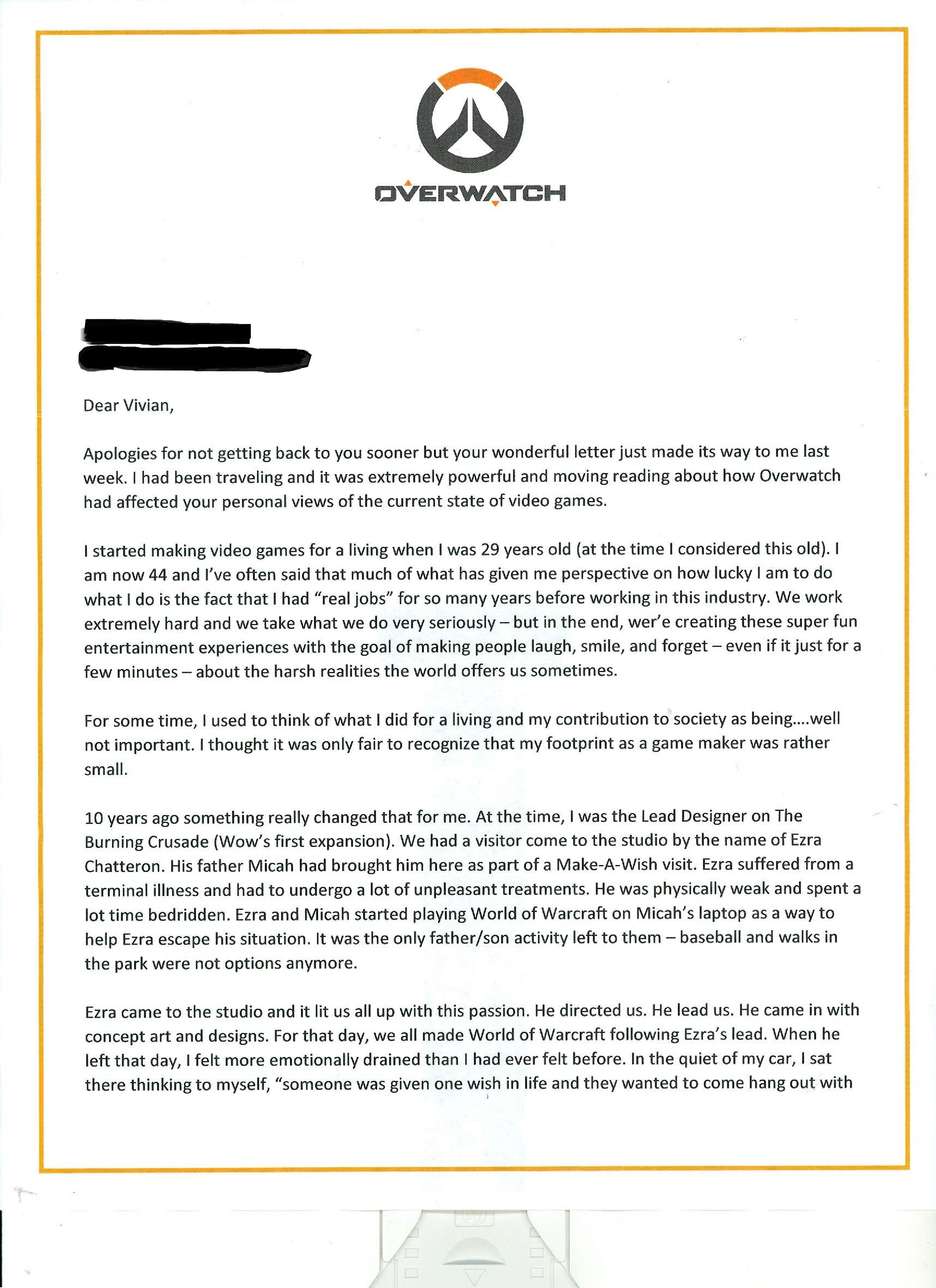 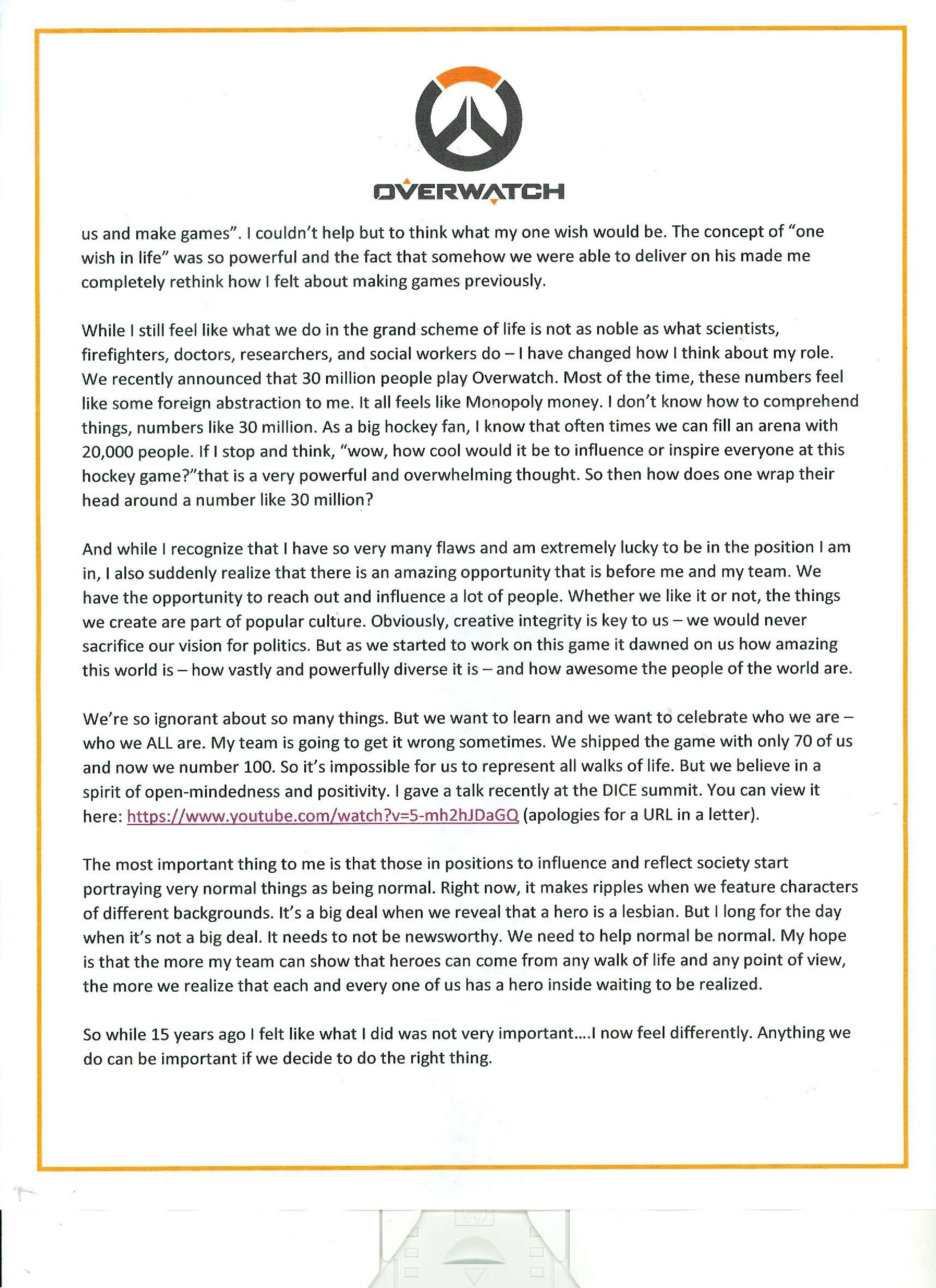 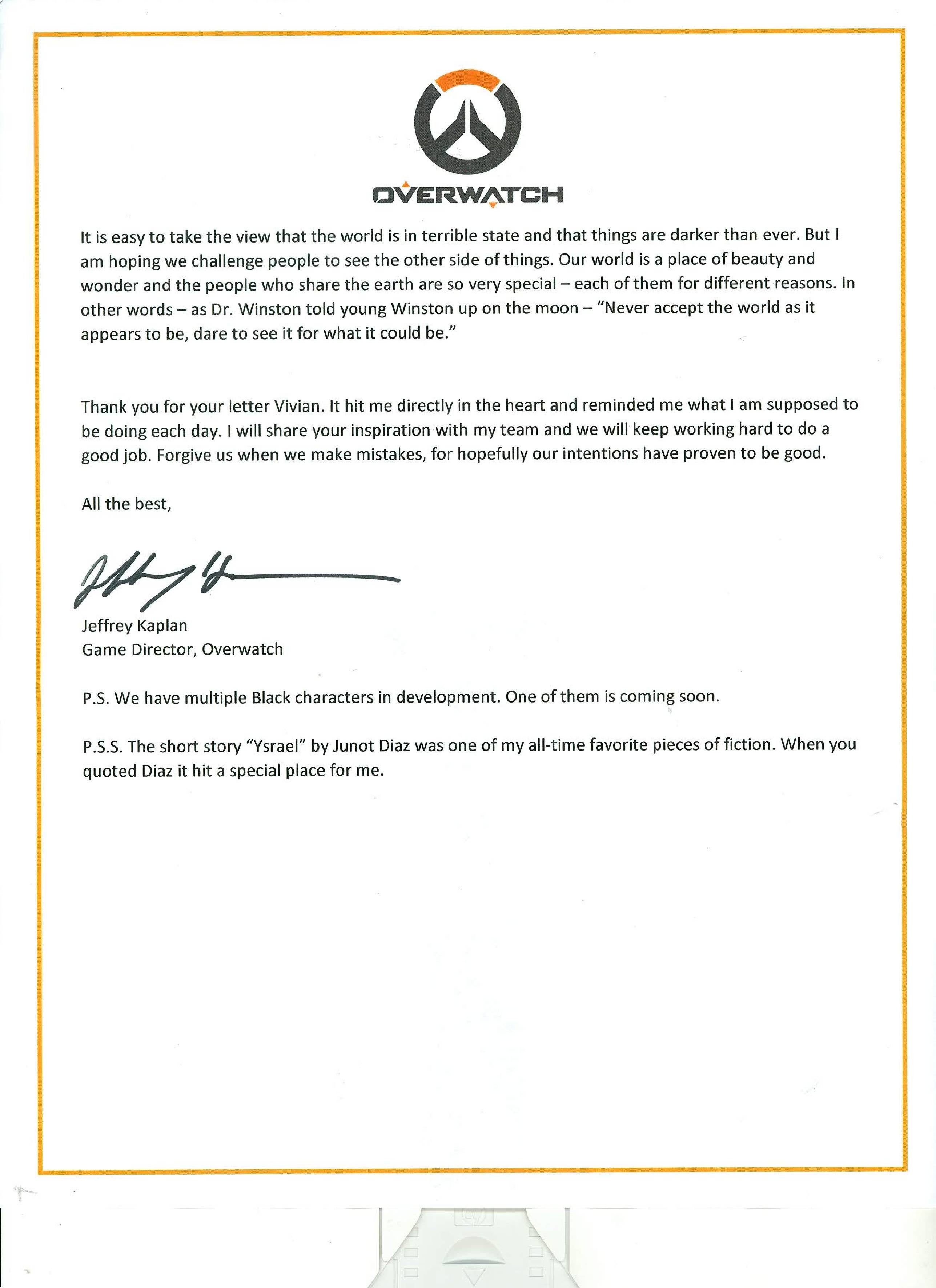 When reached by Kotaku, a Blizzard spokesperson would not comment on the authenticity of this specific letter, citing privacy concerns, but confirmed that “from time to time Jeff Kaplan does personally respond to members of the Overwatch community who reach out to him.”

Although Phillips is still waiting for a playable black female character in Overwatch, she said that Kaplan’s letter gave her the motivation to go into game development, to try to push for more change from the inside. She’s currently working on her first game, a post-apocalyptic visual novel. It has characters from a diverse array of backgrounds, and the first character you meet is a black woman.

Phillips said that while she knows that Blizzard can’t promise anything, and Kaplan told her as much in his response to her, she isn’t satisfied with the status quo.

“I refuse to keep waiting,” she said. “I keep that letter with me. Not only does it make me happy, it gives me motivation—to graduate, to find internships, to keep working on my game.”