For years, gamers have been seeking ways to feel more connected to their games. The games industry has met that desire with force feedback controllers, flashing lights that sync up with on-screen action and even fans that blow air to simulate movement.

And now there’s Razer’s Nari Ultimate gaming headset, which vibrates my face numb every time I use it.

I like to call it face feedback. The headset, which is the latest to try to do force feedback on your head, harnesses the Razer’s “HyperSense” technology to translate audio cues in my games (and music) into jolts of movement that pleasantly throb about my skull. While lesser models in Razer’s Nari line of wireless gaming headsets deliver nothing but sound, the Nari Ultimate uses software and hardware developed by a company called Lofelt to translate audio signals into feels.

What’s particularly impressive is the headset performs this translation on the fly with no perceptible lag. The headset’s vibrations are difficult to describe, but I will try. Have you ever been inside a car with a ridiculously powerful subwoofer installed when a song with all of the bass comes on? It’s not so much like being inside that car, but more what I imagine it feels like to be the car. The haptic sensations are channelled through the headset into your flesh and bone.

During violent action, say a vehicle in Forza Horizon 4 landing a long jump, the feeling is jarring, though not in an unexpected or unpleasant way. It’s what hitting the ground running might feel like.

At other times, like while listening to music with long, sustained bass notes, it’s like holding a massager lightly against the side of your face, tickling your earlobes and the tip of the nose. 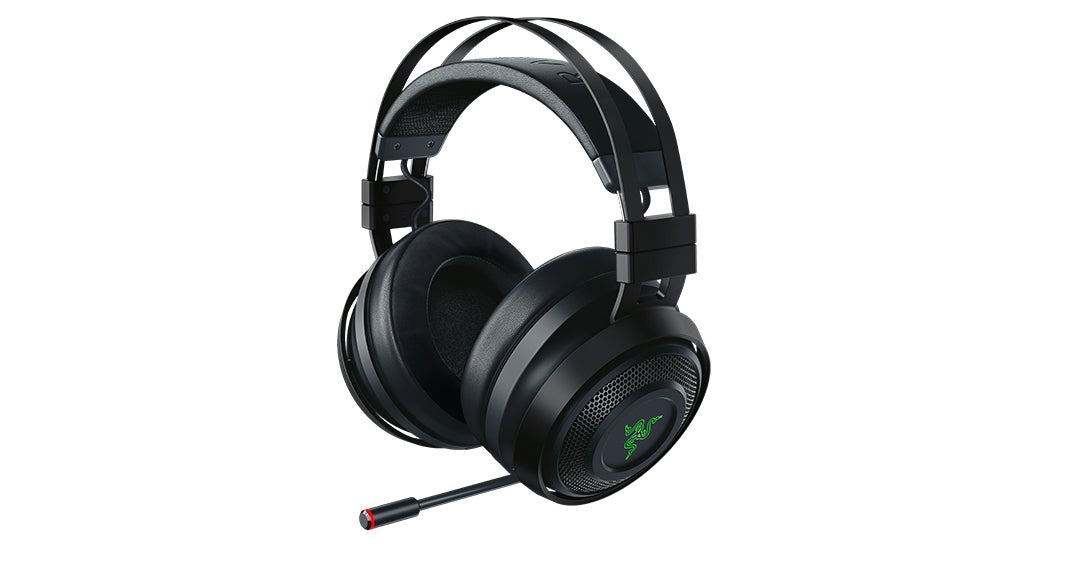 It feels strange, but not unpleasant. Tiny taps let you know that guns are firing, rumbles and bumps where the wheels meet the road. I particularly enjoy spoken dialogue, the hum of which dances across the ear like a close whisper. I’ve been wearing this thing to our morning editorial meetings every day, and my colleagues have never sounded so close.

Nifty haptic technology aside, the Nari Ultimate is a fine wireless gaming headset. It’s light, comfortable and maintains a clear signal all throughout my house. Like the other two entries in the Nari line, the standard $249.95 Nari and the $169.95 Nari Essential, the Ultimate features a retractable microphone for chatting. Convenient on-ear controls give wearers instant access to volume control, mic muting and chat mix.

Shaking My Head In Approval: There have been other attempts at haptic headsets, but none that have performed with such a wide range of sensation. It’s not a simple on/off sort of thing. There are degrees of feedback here calculated in real time based on the sound being played on the PC, be that machine gun fire or electronic music. When Razer’s HyperSense tech is firing on all cylinders, it elevates the entertainment experience. Coupled with THX positional sound, it’s almost an unfair advantage in games like competitive shooters. Nothing like feeling the enemy sneaking up on you. 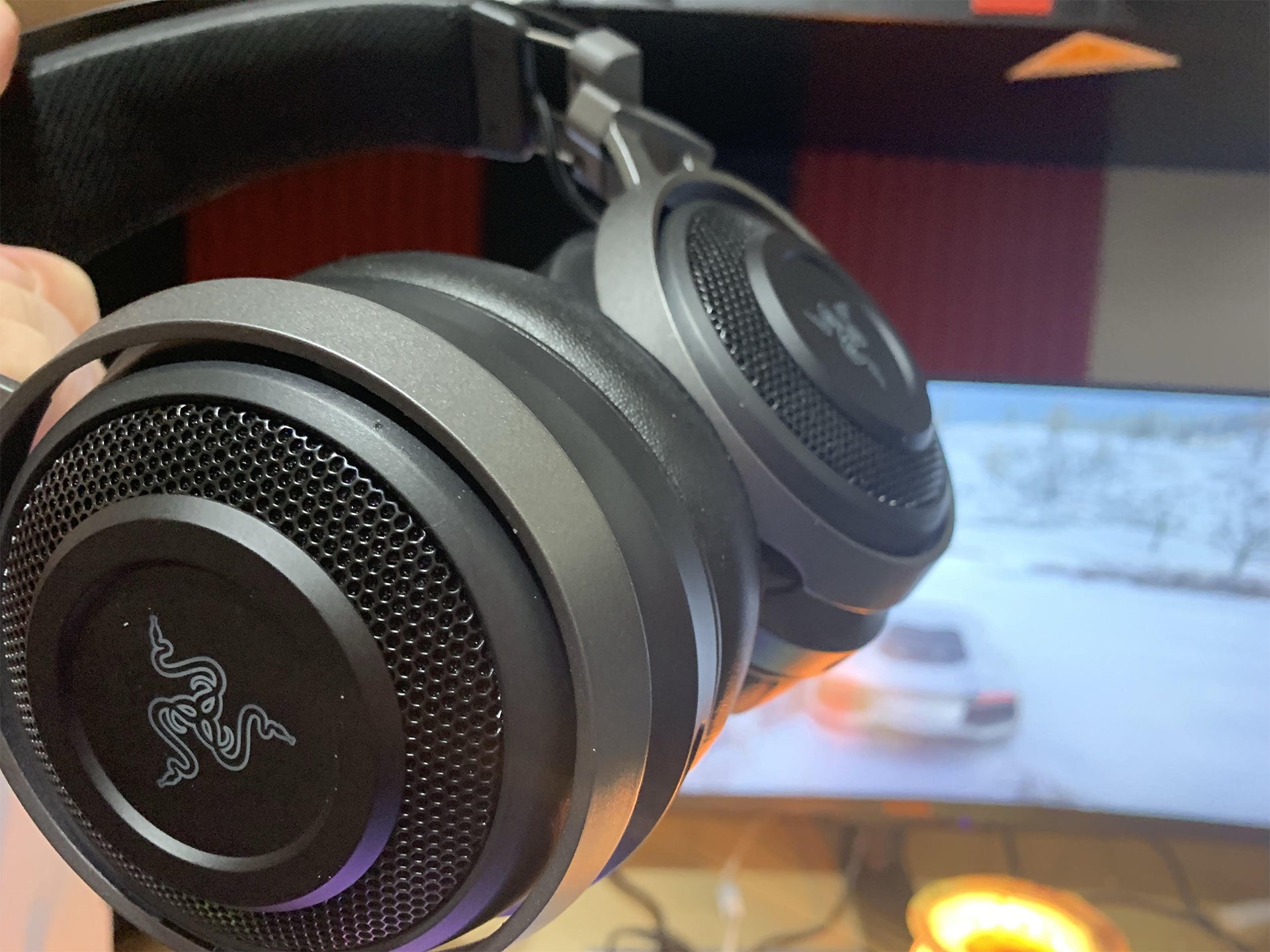 Cradling My Head In Comfort: The Nari Ultimate sports a pair of oval-shaped ear cups packed with cooling gel that keeps my ears from sweating far longer than they would without that gel.

It’s got those lovely hidden grooves in the cups to accommodate anyone who wears a vision-correcting apparatus, which is always appreciated. Best of all, even through all of its perceived movements, the suspended cloth headband never feels uncomfortable. 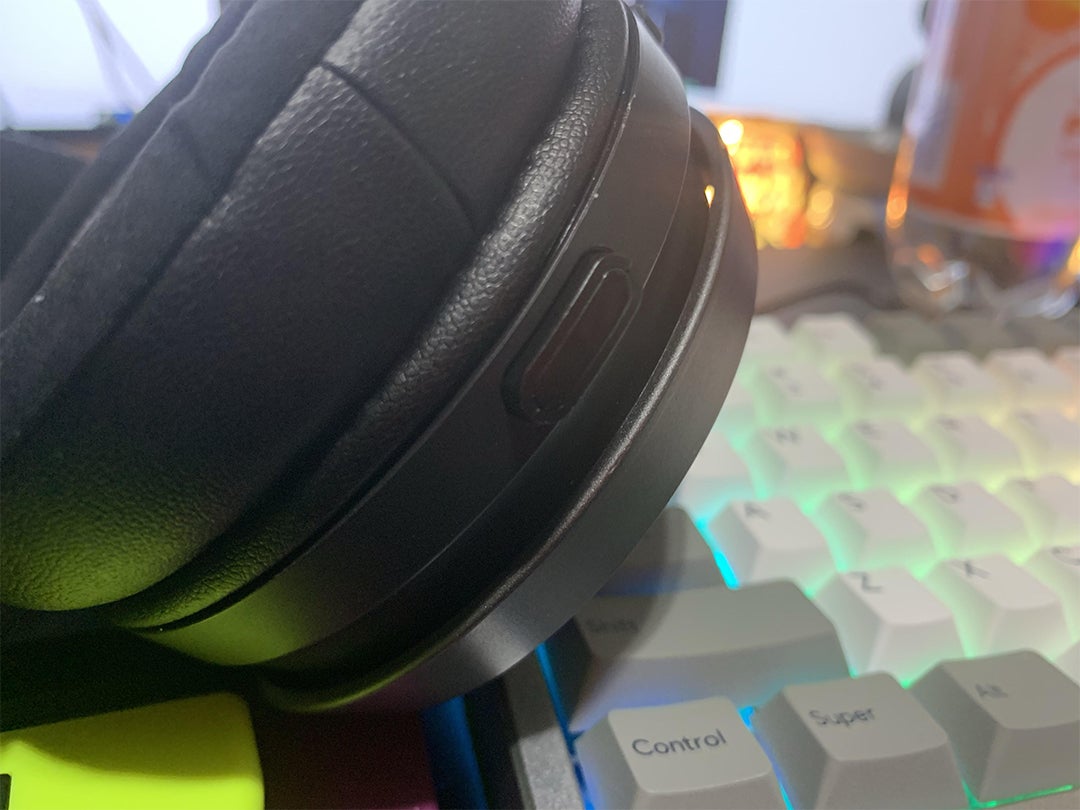 Nodding My Head At The Hidden USB Dongle: It’s a standard feature for most of Razer’s wireless headsets, but god bless the secret compartment on the right ear cup that houses the tiny USB dongle for the Nari Ultimate. The one time I forgot to return the dongle to the headset after use, I lost it in the hellscape of my child and cat-infested home for a week.

Shaking My Head At The Battery Life: With the haptic feedback and lights turned on, the Razer Nari Ultimate is good for eight hours of sound, at least on paper. It feels more like six or seven in practice.

I have to charge it every night, and sometimes during particularly long days. It’s the price paid for for the face-shaking technology—the basic Nari gets 14 hours with the lights turned on—but it’s a steep price. The unit does function as a passable non-powered headset when connected via an included 3.5 mm cable, but where’s the fun in that? 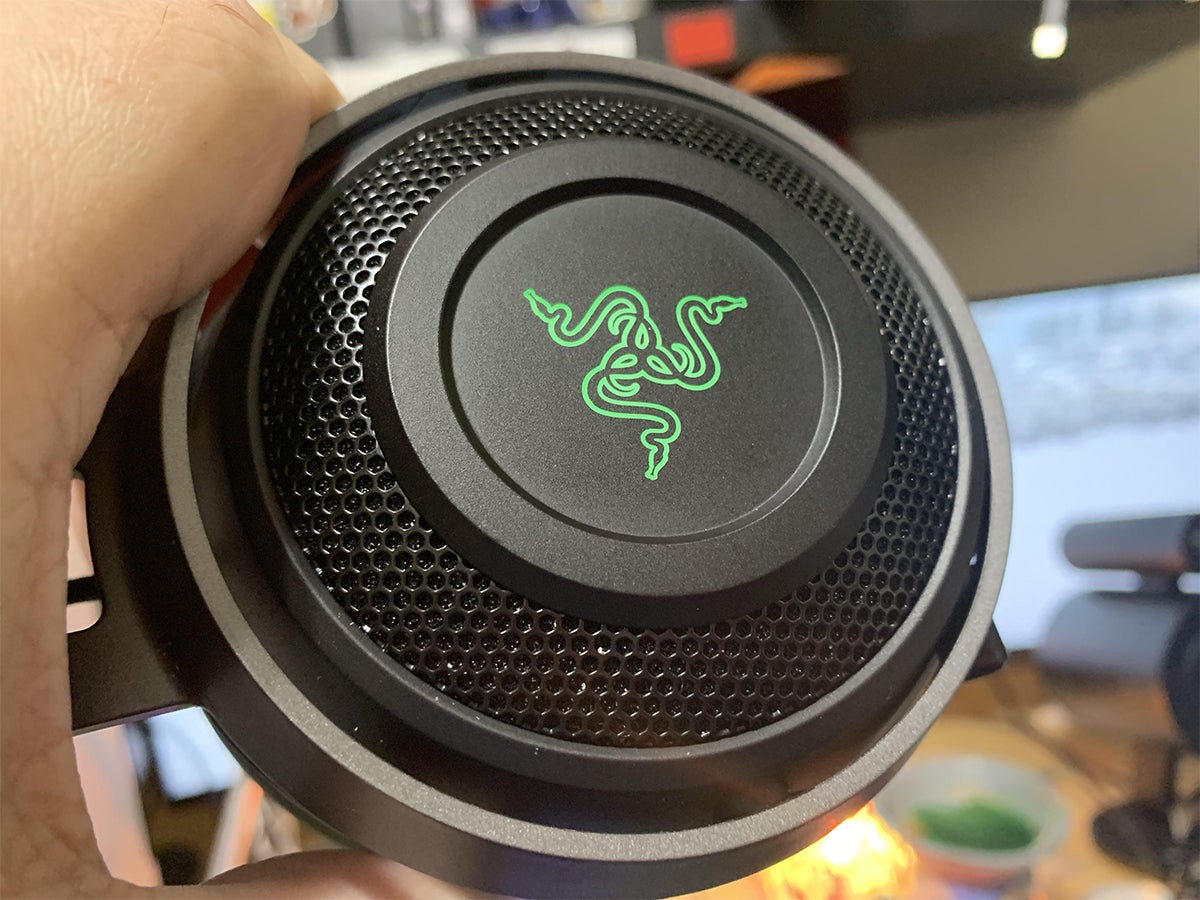 Tilting My Head At Mixed-Up Game Music: For the best haptic feedback results in any game, one has to turn off music. The Nari Ultimate’s tech does a fine job of converting sound waves to bumps and rumbles, but it tries to convert all sound, and that includes any music playing during the action.

Having Forza Horizon 4’s radio running while driving over hill and dale, I often found the Nari Ultimate giving me more feedback on the music than the car engines and collisions.

No one needs to have their head vigorously shaken while getting shot at in Call of Duty. Many people probably prefer to listen to “Marshmello” without coming away feeling like someone stuck a pair of tiny vibrating sex toys up their nose. I certainly did not imagine I would ever enjoy such things before trying out the Razer Nari Ultimate wireless haptic feedback gaming headset.

And hell, if you took the Nari Ultimate away from me tomorrow and I never wore another haptic headset again, I wouldn’t miss it terribly. I do not need to feel sound, but damn, it’s a nice option to have.

And this is just the beginning. At CES 2019 yesterday, Gizmodo got to check out Razer’s full suite of upcoming haptic peripherals, including vibrating mice, wristpads and chairs. Oh my. 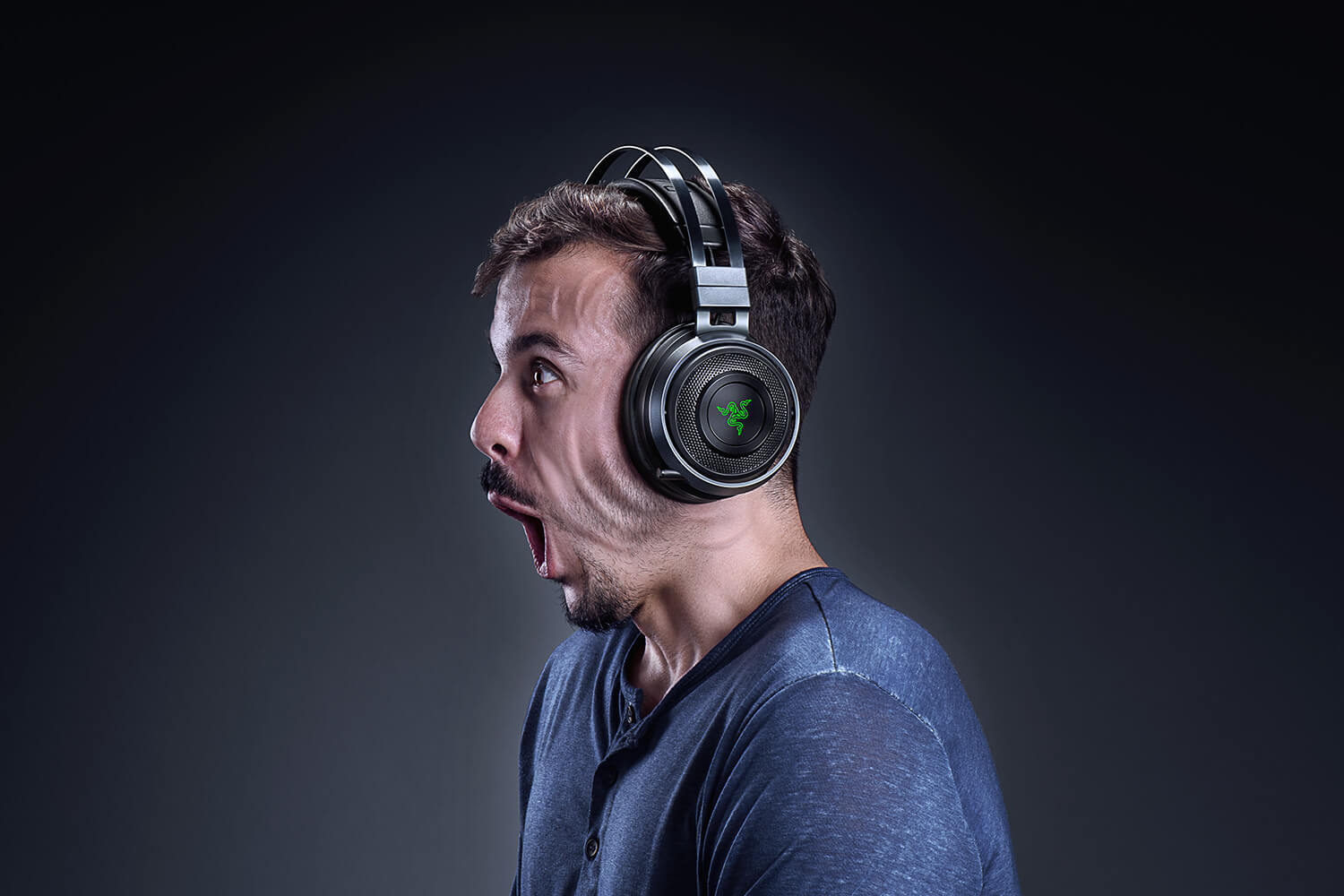 Seriously, these images are the best. (Photo: Razer)