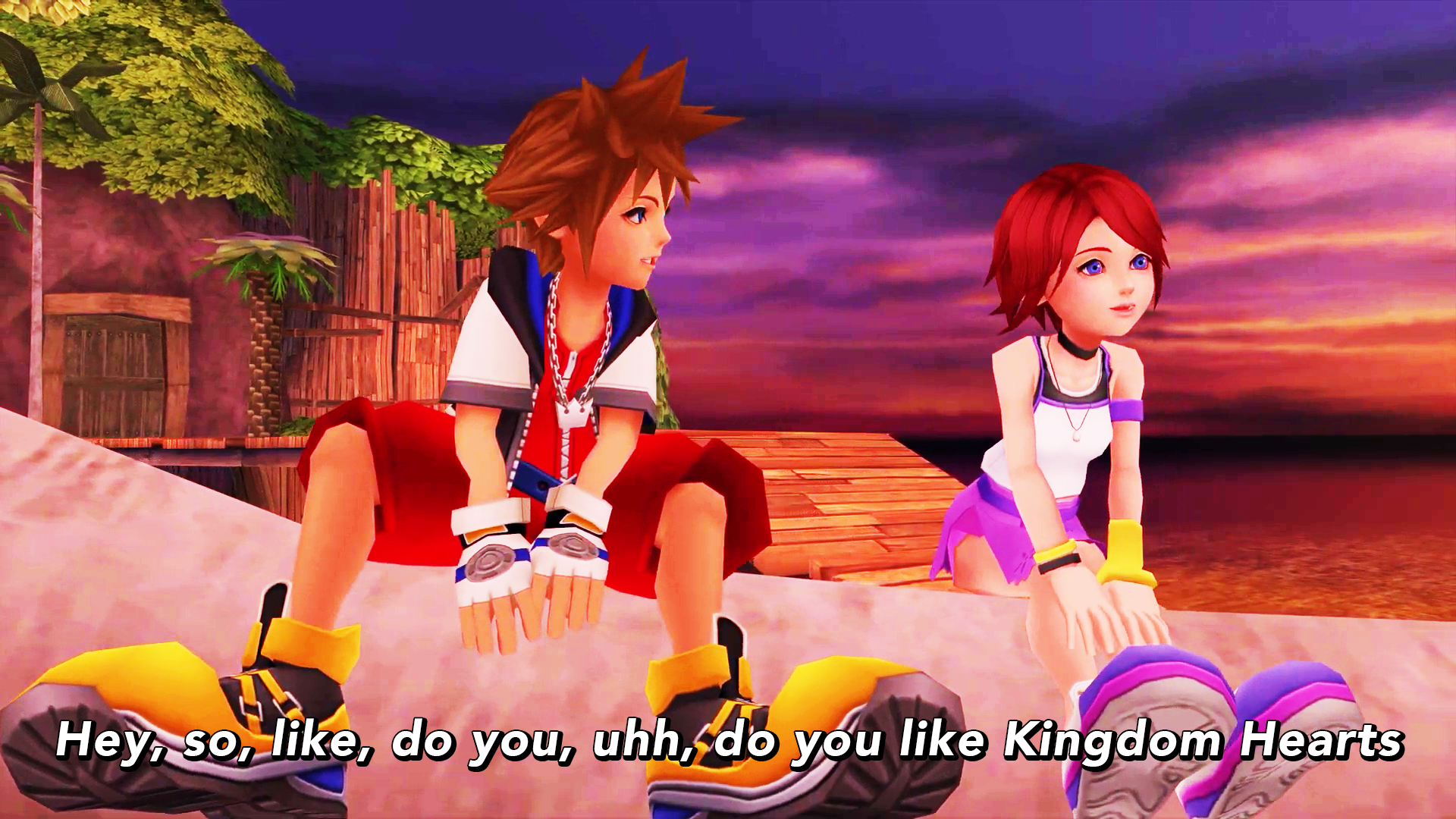 Kingdom Hearts III is the biggest, fanciest entry yet in the long-running series, and it’s out tomorrow. Maybe you haven’t done your homework on the series plot. That’s understandable, because there’s a lot of plot. Well, the game just so happens to include a perfect lore explainer that clocks in at just 19 minutes and 58 seconds.

It arrived in my Xbox One review copy of Kingdom Hearts III as part of a 1.785-gigabyte patch yesterday morning. Yes, I had clocked 38 hours in the game, completing the main campaign and doing some post-game scrounging, and I had posted a review on this very website, and I still wanted more. Imagine my surprise when the game happily announced it had added a “Memory Archive.”

Square Enix also uploaded this Memory Archive to their YouTube yesterday. The five episodes condense and artfully arrange all of the most dramatic details of all eleven games in the series. Each episode currently sits at more than 150,000 views apiece.

The game presents you an option to view them all as one uninterrupted short film. I find this preferable to watching them all separately on YouTube. Also, this way you can transition directly into choosing “New Game.” Now you’ll recognise all the characters in the thrilling, musical opening cinematics! 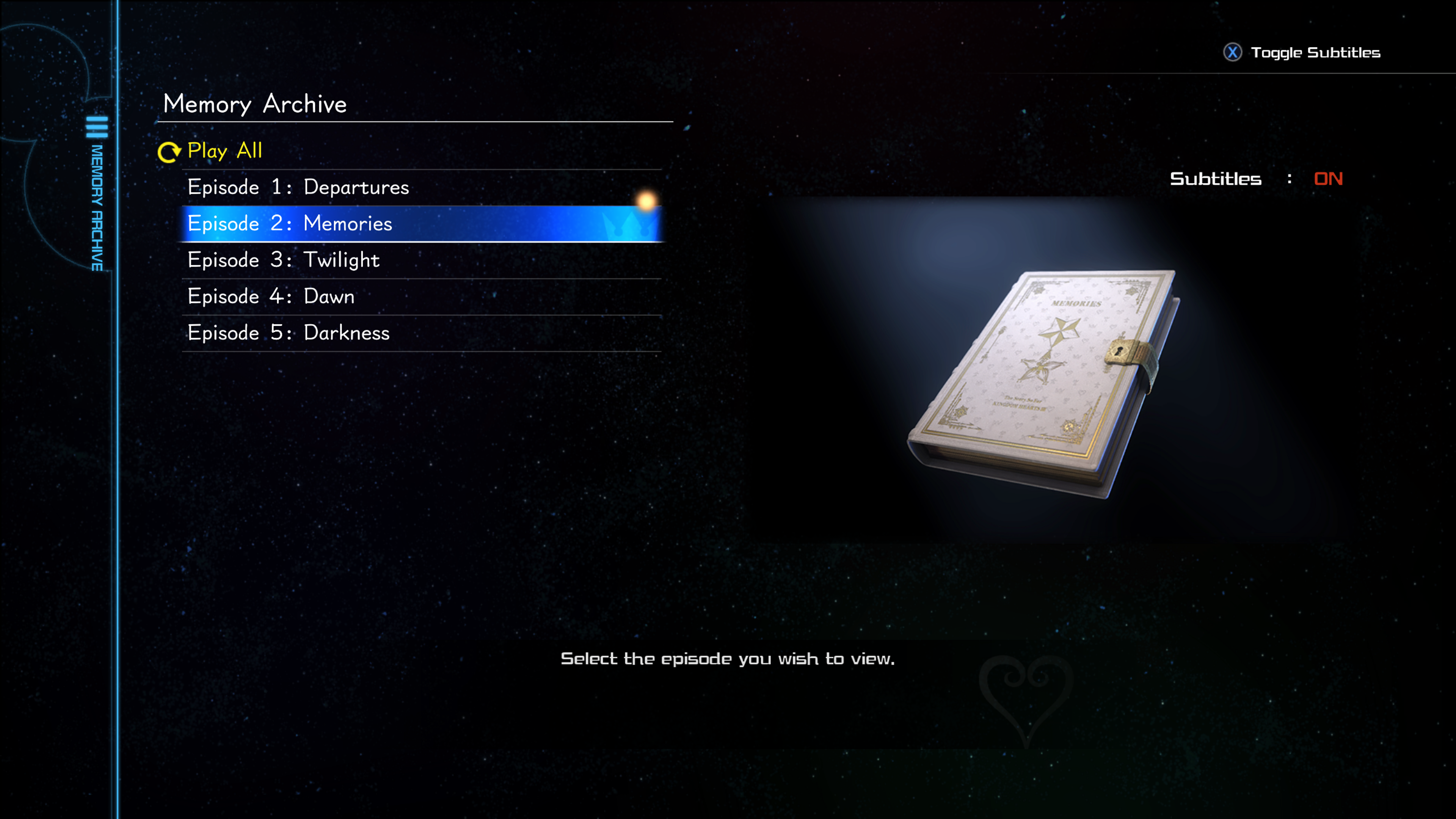 This is accessible directly from the title screen!

Speaking as someone who played the heck out of Kingdom Hearts III all the way through to its thrilling conclusion and then sat ruminating on the implications of the final plot machinations for several days, I declare this in-game lore explainer essential viewing for anyone who swore around this time last year that they were going to play through all the Kingdom Hearts games and then didn’t.

You might have also sworn you were going to watch a lore explainer on YouTube and then you didn’t do that, either. It’s OK. I can understand you not wanting to mix hobbies and homework.

I stand by my declaration that Square Enix’s official in-game lore explainer is the best for absolute newcomers to the series. It has high production values. It has great narration.

Furthermore, it’s clearly made by people who knew every microscopic detail of Kingdom Hearts III’s plot before they wrote their script. This insider edge allows them to present the big information tidbits with sparkling clarity, lending them the exact weight you’ll need to walk into Kingdom Hearts III having known nothing 20 minutes ago.

Kingdom Hearts III itself then revisits relevant plot details at a generous pace. Before one of the many tiny dangling plot threads not mentioned in Square Enix’s official explainer can jut into Kingdom Hearts III’s plot, Kingdom Hearts III has already shown you a cutscene in which that lore element is explained to an unacquainted character.

This is what I mean when I say it’s clear to me that the makers of this official “Memory Archive” knew the exact structure of Kingdom Hearts III’s plot. All in all, it’s a thoroughly professional job and the only lore explainer you need.

Having said that, I love me some YouTube videos explaining the plots of games.

This one from Eurogamer is the reason I told people I wasn’t going to make my own lore explainer. It goes into extreme detail on every spinoff. I love it.

This exuberant piece from three years ago by YouTuber FrustratedJacob is perhaps the go-to explainer for procrastinating Kingdom Hearts noobs in a hurry.

And for sheer quality, you can’t beat BDG over at Polygon’s video from yesterday. Yeah, I’m going to embed a Polygon video on Kotaku Dot Com. It’s Monday! Why the heck not!

If you’re extremely pressed for time, Square Enix has uploaded the first two minutes of Kingdom Hearts III’s opening movie. You can look at these characters silently screaming and clashing. You can intuit their relationships. You can imagine the cosmic emotional burdens they face when they wake up every morning (if they got any sleep at all last night, that is) while Utada Hikaru’s best song of this decade (yes, it’s better than anything on Fantôme) ramps right up to The Best Part and then abruptly cuts off. (The intro of the game contains the full thing, of course. And it’s a supremely world-class piece of pop music.)

Lastly and (for the purpose of lore explaining, anyway) leastly, there’s my non-explainer from last week, in which I propose that Kingdom Hearts III “unreviewable” with regards to the sheer volume of its plot. In this video, I propose you go in knowing nothing. I also try to debunk the stubborn rumour that Kingdom Hearts has the most complicated plot ever written. It’s not complicated. There’s just a lot of it. Jump in and you can probably swim. 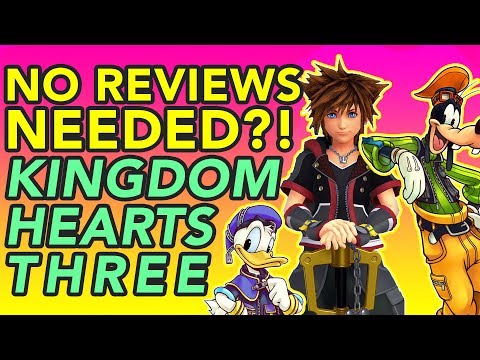 Of course, in a Kingdomhearts-ian plot twist, I ended up having to review Kingdom Hearts III because of a scheduling situation here at Kotaku HQ. I promise, right up until Stephen Totilo texted me late one night, I didn’t want to review the game. However, I had already thought so much about reviewing the game that it turned out the key was already in my heart, so I stepped forward and into the yellow clown shoes of my fate.

Kingdom Hearts III comes out tomorrow! I already played it, and I’m still excited. How weird is that? I’m going to be thinking about the ending for like a year, so I need some people to think about it with me.