Top Smash Bros. Commentator Is No Longer Accepting Feedback On Her Speaking Voice 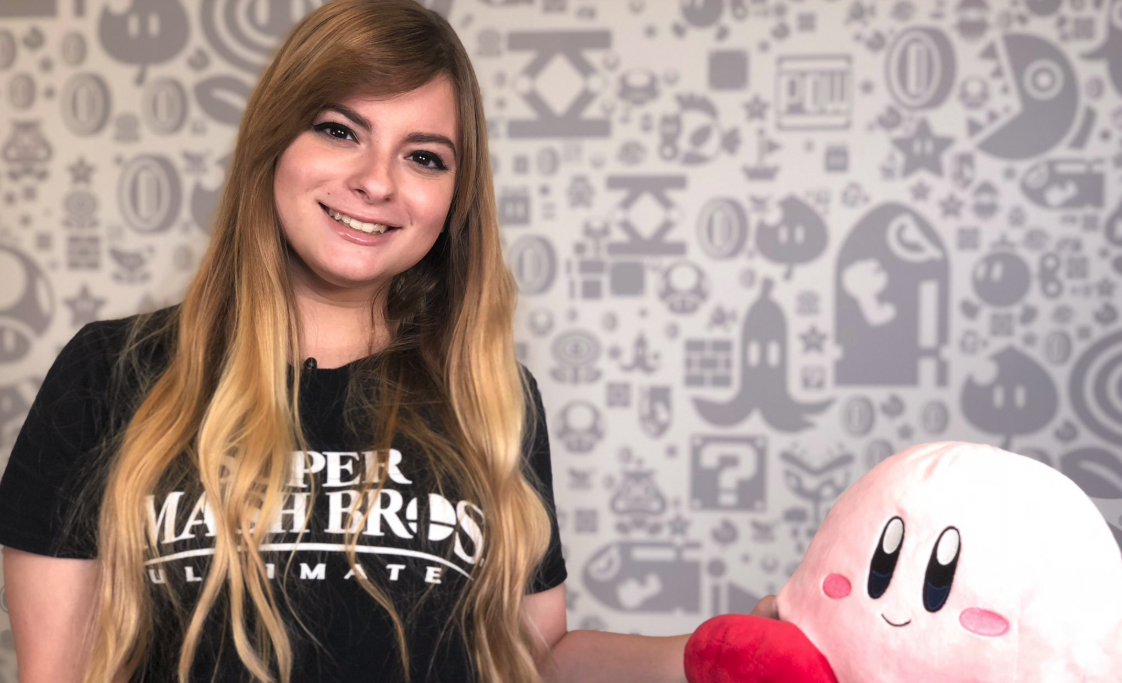 Victoria “VikkiKitty” Perez had been competing at Super Smash Bros. 4 for five months when local tournament organisers plucked her out of the contender’s pool and threw her on stage to commentate.

Over the PA one 2015 tournament in Fort Lauderdale, Florida, everybody heard the words, “Victoria, come into the stream room.” It wasn’t a question, not that Perez would have give herself the option to say no.

“I’m already talking about the game,” Perez said matter-of-factly over the phone last week. “Just point a camera at me.”

Three years later, Perez is one of the biggest names in Smash commentary. If you’ve ever tuned into a pro Smash tournament, you’ve heard the breathless play-by-plays of who attacked whom, whether attacks got dodged, who came out on top, and how the results measured up to expectations. Chances are, you’ve heard Perez’s voice in the mix.

On her Twitter, she jokes, “I’m the one who sounds like a little boy when I commentate your matches.”

Perez, 22, is on top of this world now, commentating national tournaments, including Overwatch and Arms, viewed by hundreds of thousands of people. Most notably, Smash publisher Nintendo invited Perez to commentate the 2018 Smash Ultimate invitational at E3, the first tournament of the much-hyped upcoming game.

For hours, Perez was perched on stage breaking down the brand new game and seamlessly transitioning between descriptions of its most basic elements (“When a fighter is knocked off the stage, it is a K.O.”) and deep analyses of spatial control and “tech.” 200,000 viewers tuned in at its peak. 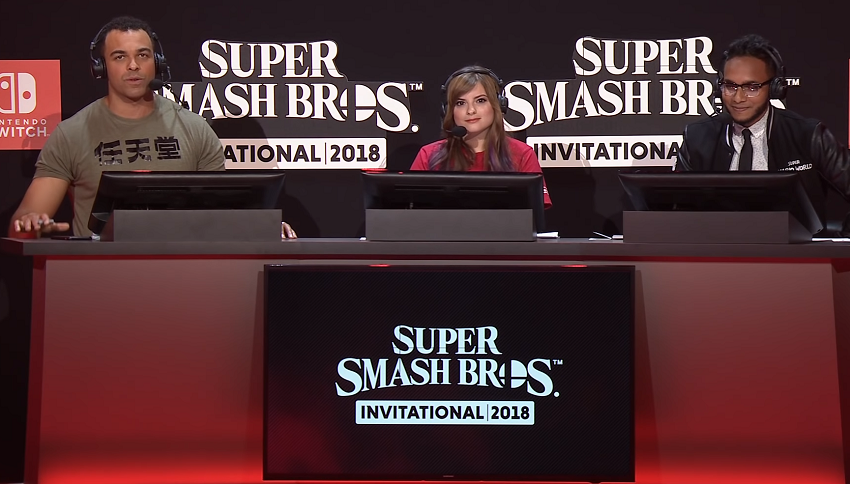 Perez is also just about to graduate college in Miami, Florida. Between studying for her communications degree and living the student life, Perez’s part-time job has her travelling the world to sportscast Super Smash Bros. on livestreams. When her face appears on camera, it’s usually framed by long, blonde hair, dyed neon colours at the ends, and an enormous pair of headphones.

“Her style of commentary is very informative, based on her experience and preference of other players,” said Josh Kendall, a Smash commentator with whom Perez formed the duo “Biggie Smalls” in 2015. (The name is a joke about their height difference; Perez is 5’1” and Kendall is 6’6”.) “She has always been textbook-heavy when it comes to knowing about specific character traits like moves doing a certain per cent. She also picks up common player habits.”

Amassing the huge amount of knowledge and background a commentator needs to be authoritative is intensely time-consuming. Perez estimates that she spends nine to 14 hours each week studying the game, either on stream or offline.

“I’m a hands-on learner,” she said. “Any character I play—that’s how I learn their toolkit. I need to play against other characters to really understand them, too.”

Commentators narrate the facts, but they are also are hype machines, laying out the matches’ stakes and stoking the flames of fan enthusiasm. In addition to that, Perez says, commentating plays an important role in the scene at large, serving as “a bridge. We are essentially selling a player. The first thing the audience will hear is the commentator. You have to be the bridge for the community to the audience.”

Perez sees her role from a birds’-eye industry viewpoint, too. “Even with sponsors, when they’re picking up a Smash player, the first thing they’ll hear is the commentators. The way a commentator talks about a player could be an influence for whether they’re picked up by a sponsor.”

Accurate mood for the day

Commentating wasn’t something Perez had planned on doing. As an elder sister, Perez had a casual Smash sparring mate throughout her childhood, but also enjoyed longer role-playing games like Kingdom Hearts. She hadn’t considered competitive gaming until a couple of years ago when she unearthed her copy of 2008’s Super Smash Bros. Brawl from her living room along with some high school friends. She became obsessed.

Once Smash 4 came out, Perez and her friends began to take the game more seriously. “We thought we were the best,” Perez laughed, explaining her impetus to start attending tournaments with her well-honed Kirby. Soon, she learned, “We were literally nothing.” Perez kept grinding, though, until she saw the results she wanted.

At one tournament, “I sat down at a setup and I beat eight people consecutively,” Perez said. “I was like, ‘You know what? I’m all for it.’” She’d drive an hour away from her home to play competitively, cutting her teeth against others’ skillsets until she’d honed her own. At the same time, Perez found herself seduced by the game’s deep mechanics and talking about them with mentors and competitors.

On the drive home, she and her friends would tease apart which small mistake landed them in the loser’s bracket or which small success thwarted their opponent. That ability to dissect the game’s particulars caught the attention of others in her local scene and ended up getting her pulled on stage in October 2015 to commentate her first local tournament at South Florida’s Versus Gaming Centre.

It’s also why, in her words, she was “fed to the sharks” three weeks later when she was asked to commentate at a regional tournament called Frame Perfect.

“I went from being completely chill—literally just looking at the game and talking about it—to getting more nervous as time progressed,” Perez said. The nerves showed up as Perez realised how much more she had to learn. Perez had not yet memorised the game’s match-ups—hundreds of combinations of how one fighter’s toolkit matches up to another’s—or the game’s more specialised mechanics.

She was disappointed by her performance, but she welcomed the feedback from her fellow commentators, who gave her tips like to let her co-commentator finish talking before she injected her own analyses.

More and more invitations brought Perez more and more work, including from Nintendo, as she continued pursuing her degree full-time in Florida. Over a few short years, Perez became the first notable female Smash commentator. As she rose to prominence, she got a lot more feedback, but not all of it was helpful.

Over time, Perez says, she’s learned to discern which comments are productive and which aren’t. “People say, ‘She has a higher voice than the men I’m used to’ or ‘Her voice is too low for a woman,’” she said, also citing her old tendency to end sentences in a higher, question-style tone.

“Comments like that just aren’t constructive. There’s nothing I can do about my voice.” Her attitude is this: “I’m gonna get hired whether they like it or not and I’m gonna do my best… I personally don’t pay attention to any of that. They’re not my peers. They probably don’t commentate or aren’t good commentators.”

Perez chose to listen to her peers’ criticism and push everything else to the side. “Some people legitimately wanted me to get better. I’m gonna listen to them and do my best. Eventually the criticism became not constructive at all.” In her first month commentating, a peer she trusted told her never to look at Twitch chat while she worked. To this day, she says, she hasn’t, describing it as “a disaster waiting to happen.”

2016 brought more scrutiny on Perez, but not the kind she had been working towards. That year, Perez went to EVO to witness its enormous Smash tournament. During the event, her then-boyfriend invited high-profile Smash player Cristian “Hyuga” Medina to crash in their hotel room because he was intoxicated. Perez says she fell asleep next to her boyfriend and woke up to Medina groping her.

At the time, Perez explained the situation on Twitter and wrote that she was coming forward “only to prevent future incidents like this from happening ever again” and to warn other tournament attendees to be careful. Medina, who said he didn’t remember anything from that night, was consequently dropped from his sponsorship.

When I asked Perez how it felt to be known, in part, because of Medina’s alleged harassment, she explained with calm confidence, “It was definitely a setback. It was people’s focus. People ignored everything I’d accomplished prior to that happening. It sent me back mentally; it made me not want to continue on.”

She also pushed back against the people who have said that the incident had somehow benefited her career: “I’ve had people tell me I was nobody and that’s what got me to where I was. Little do they know I’d worked with Nintendo prior to that, that I’ve done plenty of tournaments and locals.”

Perez didn’t quit, and over time, more commentating opportunities presented themselves to her, including one of the most discussed Smash 4 matches in history: number one Smash 4 pro Gonzalo “Zero” Barrios’ loss to underdog Saleem “Salem” Akiel Young at EVO 2017.

It was a gig for Disney XD, which, she said, presented a special challenge. “They wanted us to cater to a more general audience, not a competitive one,” Perez said. “Your grandma watching Smash isn’t going to understand what a ‘back air’ is, or a roll—even if they see a character roll.”

I'm the one who sounds like a little boy when I commentate your matches.

Perez pulled it off, contextualising the match for both newcomers and pros alike by describing a recent game patch that gave Barrios more of an advantage against Young, who was playing the fighter Bayonetta. With gravity, she then intoned, “But he is not going down without a fight.”

Over the course of the match, Perez broke down point by point how Young continued anticipating Barrios’ positioning and capitalising on the the most subtle of openings. In their last game, each with one stock, Young had a brutal 101% damage to Barrios’ 25%. Young shocked the audience by spinning Barrios straight into the sky with an inescapable combo.

Perez’s commentary heightened the moment as she yelled “And this is the first time we’re seeing the sealing combo, Salem taking it over Zero here at EVO 2017!”

When I asked Perez whether she’s noticed her career paving the way for other female Smash commentators, she said she has, and it’s only increased her dedication to her craft. She wants up-and-comers to know that “growth is very possible.” She continued, “My job isn’t just to educate an audience but to entertain them, add some personality, and encourage people at home that they could commentate and play, too. That’s the whole purpose of showing these tournaments.”

The next generation of Smash fans will grow up watching Perez. Last year, at the Frame Perfect 2 tournament, Perez was walking around the floor when she saw a little girl, not older than 7. “She literally pointed at me and said ‘gatico,’ which means ‘kitty,’” Perez recalled. “That was amazing.”