Xbox Game Pass Quests Give You Money For Earning Achievements

game passmicrosoftmicrosoft rewardsquestsxbox one
To sign up for our daily newsletter covering the latest news, features and reviews, head HERE. For a running feed of all our stories, follow us on Twitter HERE. Or you can bookmark the Kotaku Australia homepage to visit whenever you need a news fix.

It’s a small but interesting new development in how the company has been trying to gamify how people play games on Xbox.

Announced over on the Xbox website, there will be seven quests available in January worth 2,100 possible rewards points.

Some of the quests revolve around getting certain achievements in specific games. For example: killing 100 enemies in Metro Redux using a revolver to get the Cowboy achievement. Other quests are more generic. There’s one for collecting atn achievement from any game that was added to Game Pass since December.

In the past, Xbox achievements gave you bragging rights and increased the gamerscore on your Xbox Live profile. Other players online could look at your account and see how many games you’d played and how much of a diehard you were in plumbing their depths.

Played Halo 5? Have the Lone Wolf achievement? You must really love Halo. This new system adds in a prize structure as well. 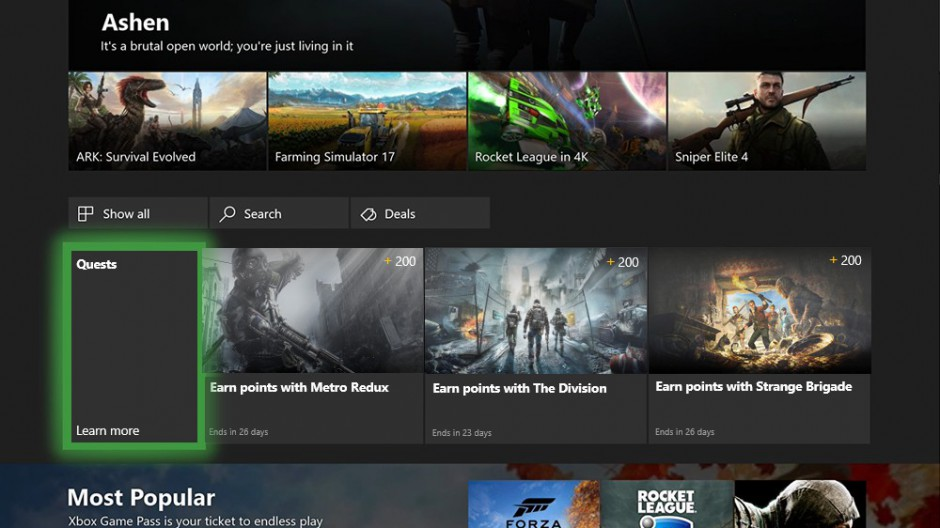 Quests were added at the beginning of 2018, but for most of the year they consisted only of things like watching something on Mixer for a certain number of minutes, completing a customer feedback survey, or clicking through to read about a new game on the Xbox dashboard. Some were worth small amounts of rewards points while many simply entered you into a sweepstakes for things like a free year of Xbox Live Gold.

Toward the second half of 2018, Microsoft started peppering in new quests specific to getting achievements in certain games. But they were few and far between and not tied to earning rewards points.

With the new Game Pass quests, it feels like the company has finally settled in on a more meaningful approach to creating a meta game around playing other games.

It also complements Game Pass in an interesting way. Like Netflix, it’s easy to get paralysed by choice with Game Pass. There are hundreds of games, including lots of critically acclaimed ones, so where do you get started? Quests are one way of nudging players in a few directions.

One of the virtues of having a big library of free games to choose from is it invites people to experiment and try out things they might not otherwise risk their money one. Someone who usually only plays shooters and sports games might give an adventure or strategy game a try. Microsoft seems to get that need to push subscribers to try more games.

They made one of January’s Game Pass quests “Genre Explorer,” challenging players to get at least three achievements from different games in different genres. You’d get 300 points for that.