Young Justice: Outsiders Is A Return To Form For The Animated Series

Warner Bros. and DC’s animated films and television shows have always eclipsed their live-action offerings in terms of depth and nuance in their storytelling, and DC Universe’s Young Justice: Outsiders is no exception.

When we first met Young Justice’s team of sidekicks almost 10 years ago, they were all still very much in the process of figuring out what it would mean to be superheroes act independently of their mentors, something that was about more than just “how” they would go about fighting crime. Where so many other comic book stories rush to focus on how sidekicks part ways with their mentors because of personal conflicts, Young Justice instead gave each of its young heroes arcs of personal growth and evolution. The stories made it clear why certain characters simply had to figure out who they were outside of their relationships with the Justice Leaguers.

If the show’s first two seasons were about the core team’s growing pains as they transitioned from being young teens into proper adults, Outsiders is all about them becoming full-fledged heroes in their own right—who, as the season’s title suggests, find themselves cut off from everything they know in a way that’s required them all to grow up even more.

Young Justice: Outsiders picks up about two years after the events of season two and quickly establishes that the world’s superhero teams are in something of a state of disarray. After a routine mission on the planet Rann ends with Black Lightning accidentally killing a monster who turns out to be a teenaged, metahuman from Earth, the entire Justice League convenes for a meeting to discuss the current state of meta-activity.

With the number of new metahumans manifesting their abilities on the rise, a new industry trafficking the children quickly springs up to meet various governments’ demands for the living weapons. Kids who test positive for the metagene are forcibly transformed into living beings of molten rock, while those who test negative simply disappear, and the League is all but helpless to stop the metahuman trade, as it’s become an interplanetary business they don’t have the bandwidth to take on themselves.

After years of working somewhat amicably with organisations like the United Nations, public opinion about the Justice League has taken a marked turn for the worst. And, while they’re loathe to admit it to one another, it creates a tension within the team that splits it in half between those who feel like it’s time to take justice into their own hands and those who believe it’s important to respect countries’ sovereignty. 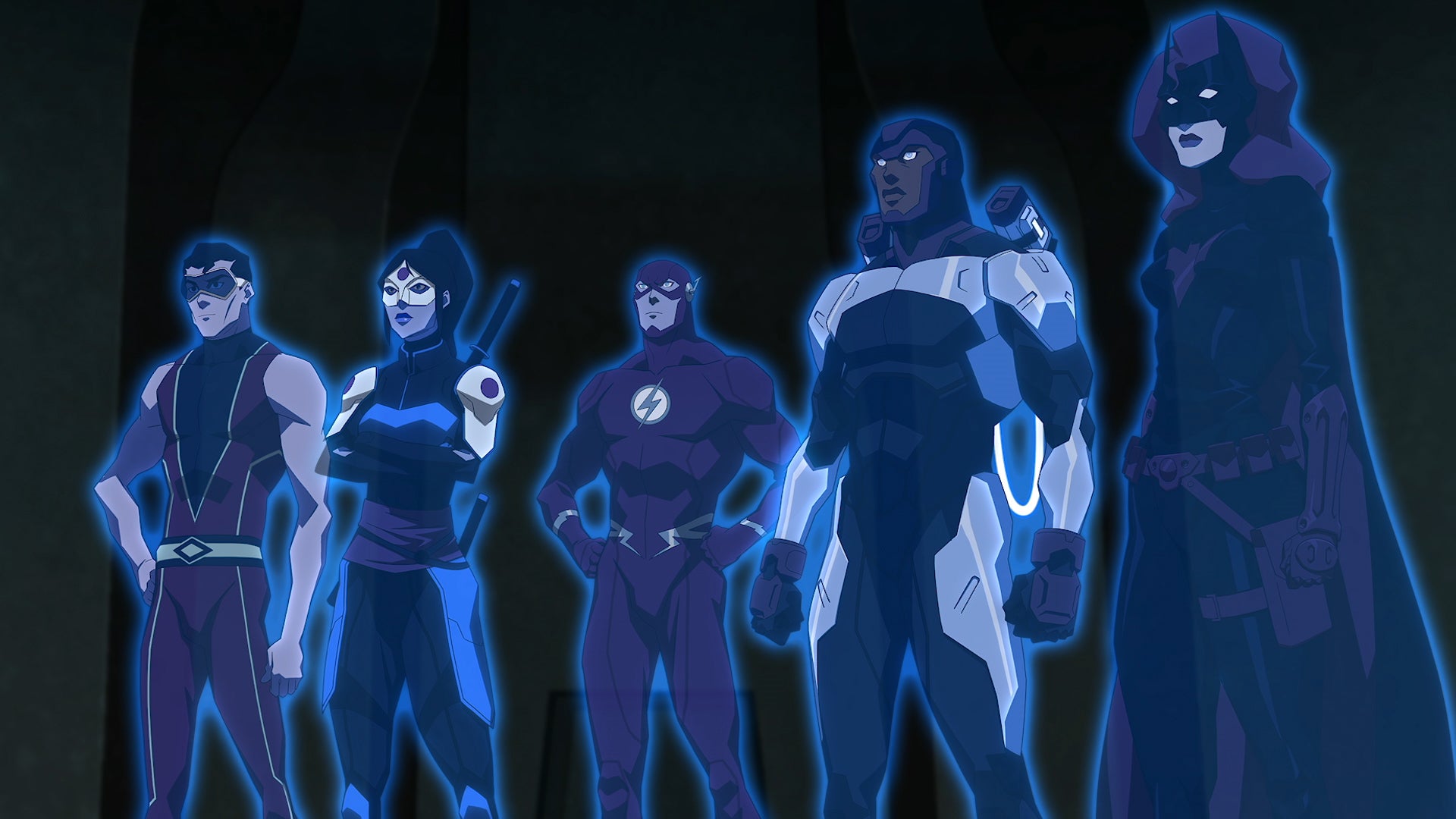 Remote members of the Justice League deciding whether you’re about to resign. (Image: DC Universe)

What’s interesting about the League’s falling out is that while A-list members like Batman and Wonder Woman are busy arguing at what might as well be the “big kid’s table” in their minds, Outsiders subtly lets us know that the Young Justice team has matured in such a way that their mentors’ schism isn’t something that really shakes them. These are the types of internal, moral debates the sidekicks grew up hearing regularly and after years of watching and taking notes, they’re all at a point in their lives where something like this presents them with the opportunity to step up to the plate on their own, which likely wouldn’t have happened had they all decided to ask for permission instead.

Young Justice: Outsiders uses the League’s schism as a backdrop for the core cast’s own journeys and to illustrate how each of them has, over time, become prepared to tackle situations in ways their mentors never could or would. While the League’s busy trying to piece itself back together and repair its public image, Team Young Justice is on the ground doing its best to smoke out one of the main sources of Earth’s trafficked metas: the kingdom of Markovia.

Surprisingly, the first chunk of Young Justice: Outsiders is more focused on international geopolitics and political instability than high-flying super heroics. The show’s teasers have made it clear that the team’s foes will become increasingly more threatening before they end up coming face to face with after the long hiatus and understand how they all relate to one another. 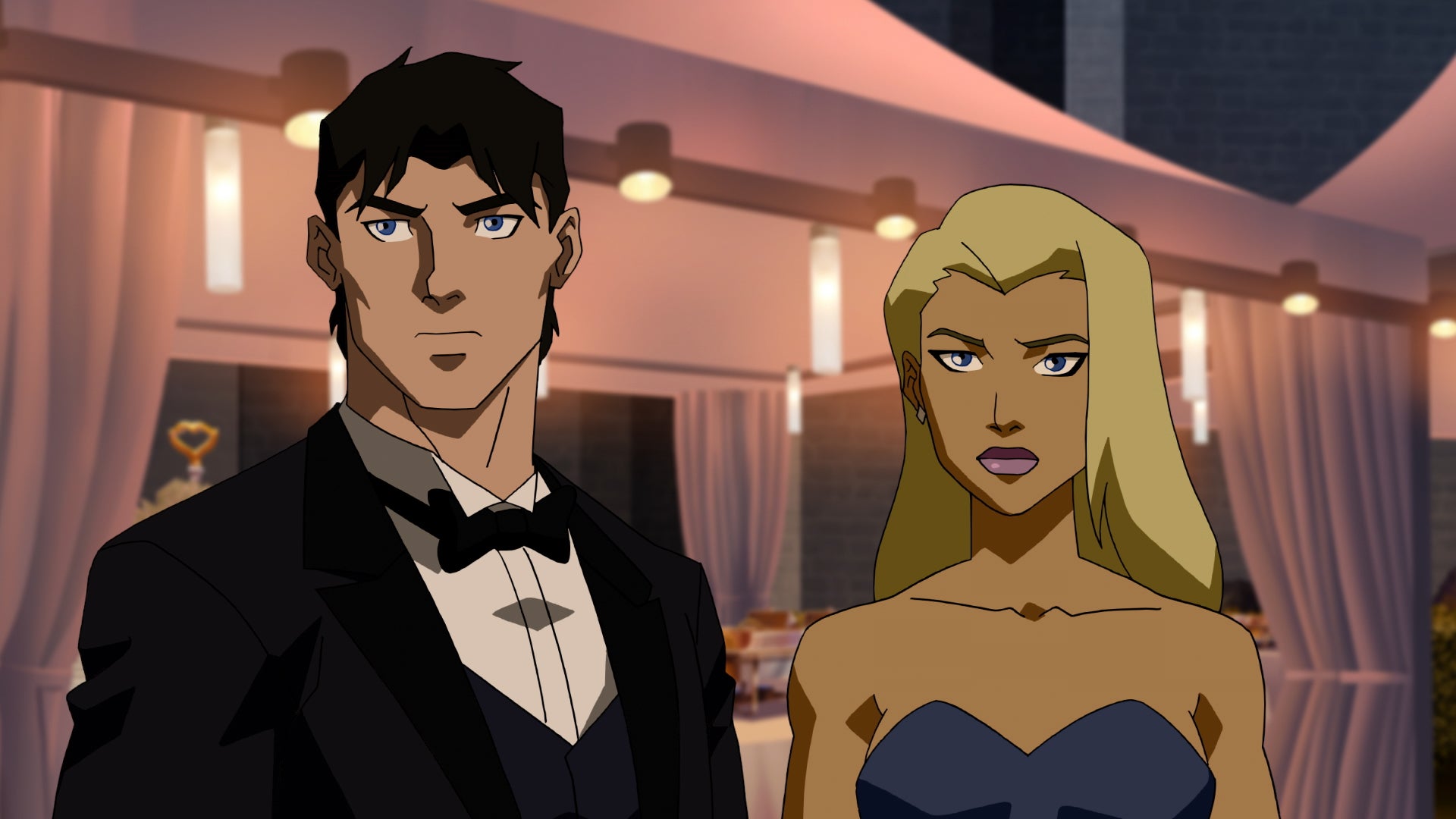 Superboy and Stargirl at a formal event. (Image: DC Universe)

Ultimately, what really stands out about Young Justice: Outsiders is how it feels both like a very natural continuation of a show that went off the air six years ago and a series that was tailor-made for 2019. Young Justice always skewed somewhat darker and more mature than other WB/DC animated productions aimed at kids like Teen Titans Go! and DC’s Superhero Girls, but the show feels perfectly aligned with the generally more serious tone that the company’s gone with for its DC Universe programming.

If you’re a newcomer to the series, Young Justice: Outsiders does a solid job of providing a good way of getting into the rhythm of the show’s larger world and figuring out what’s what, and for those who’ve been waiting for the series’ return, you definitely won’t be disappointed.