Anthem’s open demo, which launched this past weekend, had its first “mini-event” last night. A fiery vortex formed in the sky, and some big rock monsters appeared on the ground below. It made for a nice change of visuals and something new to hunt, but like a lot of what the demo has shown off, something seemed to be missing.

BioWare’s multiplayer shooter is entering the growing landscape of live service games that get small updates every few weeks or months so that players feel like there’s a reason to keep returning to them. For example, Fortnite started off this year with a mysterious icy sphere, and Destiny 2’s Valentines-themed Crimson Days event kicks off next week. Anthem’s mini-event unfolded in a familiar fashion.

On Monday morning, the game’s Twitter account started tweeting about a weird new anomaly in the sky in the game’s freeplay mode.

As players became aware of it, they started taking snapshots and sharing them online. After seeing those reactions, I decided to hop back into the demo and see what was going on for myself. The pictures looked cool. The first part of the mini-event worked.

Once my javelin loaded into the world, I started looking around for the big red ring in the sky. I thought it might appear as an icon on my mini-map, like Fallout 76’s blast zones, or that there would be a dramatic shift in the lighting in the direction where the vortex could be found.

Instead, I spotted it just by scanning the horizon. It looked beautiful, sparkled with bits of meteors burning up as they fell from it into the atmosphere below. It also looked super far away, at which point I realised it probably wasn’t something I could actually go inside and rather was purely decorative.

So I launched my javelin into the air and flew off in search of what else might be different in the world. I stumbled upon a mission marker and started to engage with a group of enemies but soon I realised that it was an old mission type I’d already done before and also, it didn’t have anything to do with the vortex.

I flew around a bit more, trying where possible to go in the direction of the firestorm but never seeming to get much closer to it. I eventually stumbled into an altercation with an Ash Titan, a giant molten rock monster that throws fireballs at you and wasn’t previously on the prowl in freeplay mode. Mystery solved.

I’d already fought a couple of Ash Titans during the Anthem demo’s brief narrative questline, and though it was nice to see something new during my patrol, it wasn’t the payoff I wanted.

Anthem’s demo has suffered from a lack of interesting encounters and mission types. Mostly, they involve flying into a room, killing everything you see, and then flying onto the next one. That sequence could be used to describe a lot of what you do in most shooters, but the combination of sprawling open spaces and mostly stationary mobs of enemies has made the simplicity feel especially obvious in Anthem. 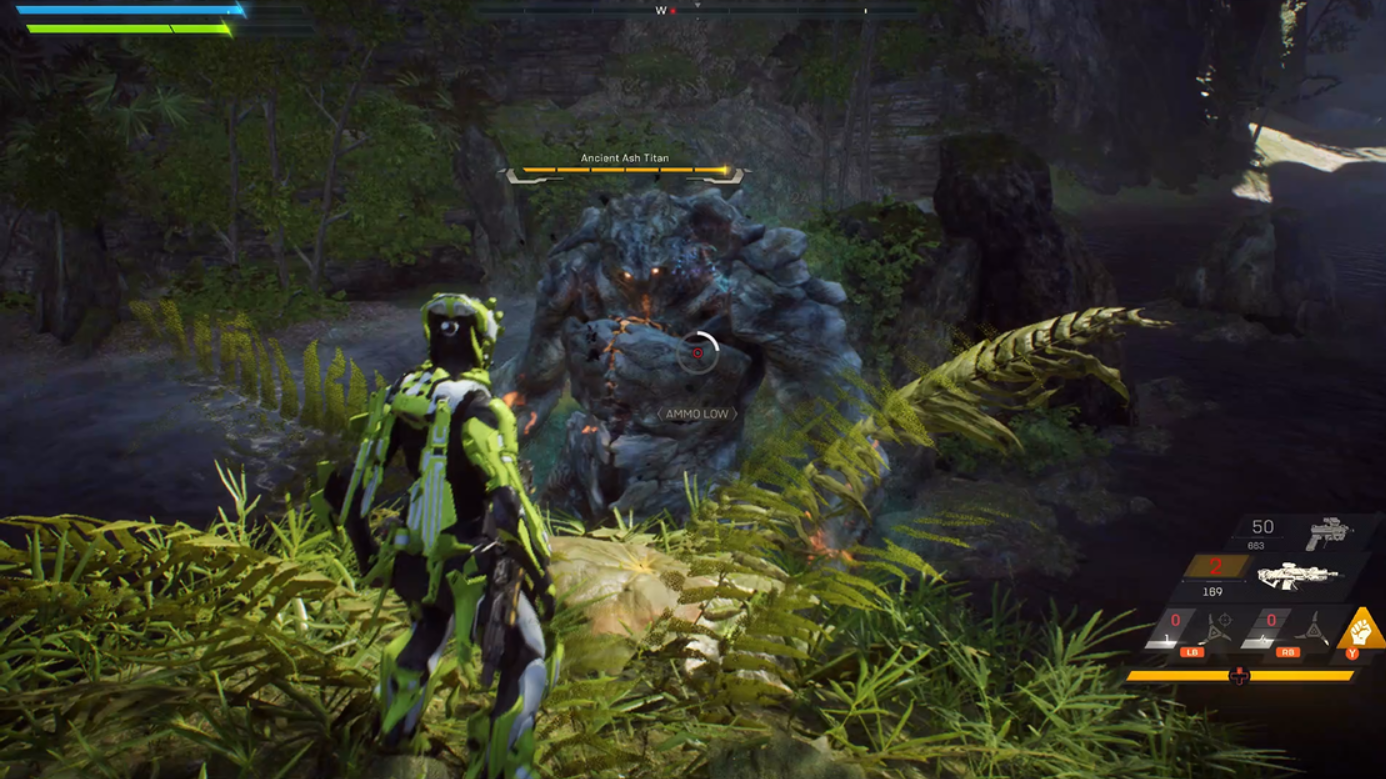 Ash Titans are easier to take down as a group. They are big bullet sponges while playing solo, especially if you’re playing as the melee-oriented Interceptor class like I have been. It felt sort of like solo-ing a volcano. Ash Titans might be slow and pretty stationary, but you do not want to get caught trying to stab them with a laser sword. Unfortunately, no other online strangers showed up during the fight.

I saw one player had tweeted at Casey Hudson, BioWare’s general manager, to ask if the there was anything else to the event or if it was safe for them to log off. Hudson responded: “Yep, if you went out in the storm that formed today and fought some titans then you’ve experienced the mini-event that we added to this weekend’s demo. Just a small tease of some of the things we’ll be doing when @anthemgame goes live.”

As with everything else in Anthem, it’s too soon to tell how all of its individual parts will fit together. BioWare has kept almost everything to do with the game’s overall story, in whatever form it exists, under wraps.

Given the world of Anthem is full of ancient artifacts and mysterious technologies with the power to do large-scale terraforming, there’s plenty of room for interesting events in the future. Hopefully future events will involve more than a pretty picture and old bosses.