animated cartoonaqua teen hunger forceathfgolfps2
To sign up for our daily newsletter covering the latest news, features and reviews, head HERE. For a running feed of all our stories, follow us on Twitter HERE. Or you can bookmark the Kotaku Australia homepage to visit whenever you need a news fix.

When I think about the animated Adult Swim show Aqua Teen Hunger Force many things come to my mind. The weird villains, Carl, the numerous name changes it had towards the end and that one time people thought their street ads were bombs. One thing I don’t associate with the series is golf. So it’s bizarre that their first major video game is a golf game.

Aqua Teen Hunger Force Zombie Ninja Pro-Am is a title that sounds more like someone took a few darts and chucked them at a board covered in different and unrelated words. The title also fits for a series that had a name that was so unrelated to the actual show that the creators kept changing it.

The game was developed by Creat Studios. They also developed two video games based on the American Chopper reality TV series. ATHFZNPA was released on the PS2 in November 2007. This was 2 years after the Xbox 360 was released and nearly a year after the PS3.

The actual gameplay is a strange mix. A large portion of Ninja Pro-Am features the stars of the show, Master Shake, Meatwad and Frylock, playing golf. The game uses the standard three-click system, where players hit a button to start a meter, hit it again to set the power and finally hit the same button again to set accuracy.

However, Ninja Pro-Am isn’t just a golf game. This is nice, because the golfing is pretty boring and not very good. 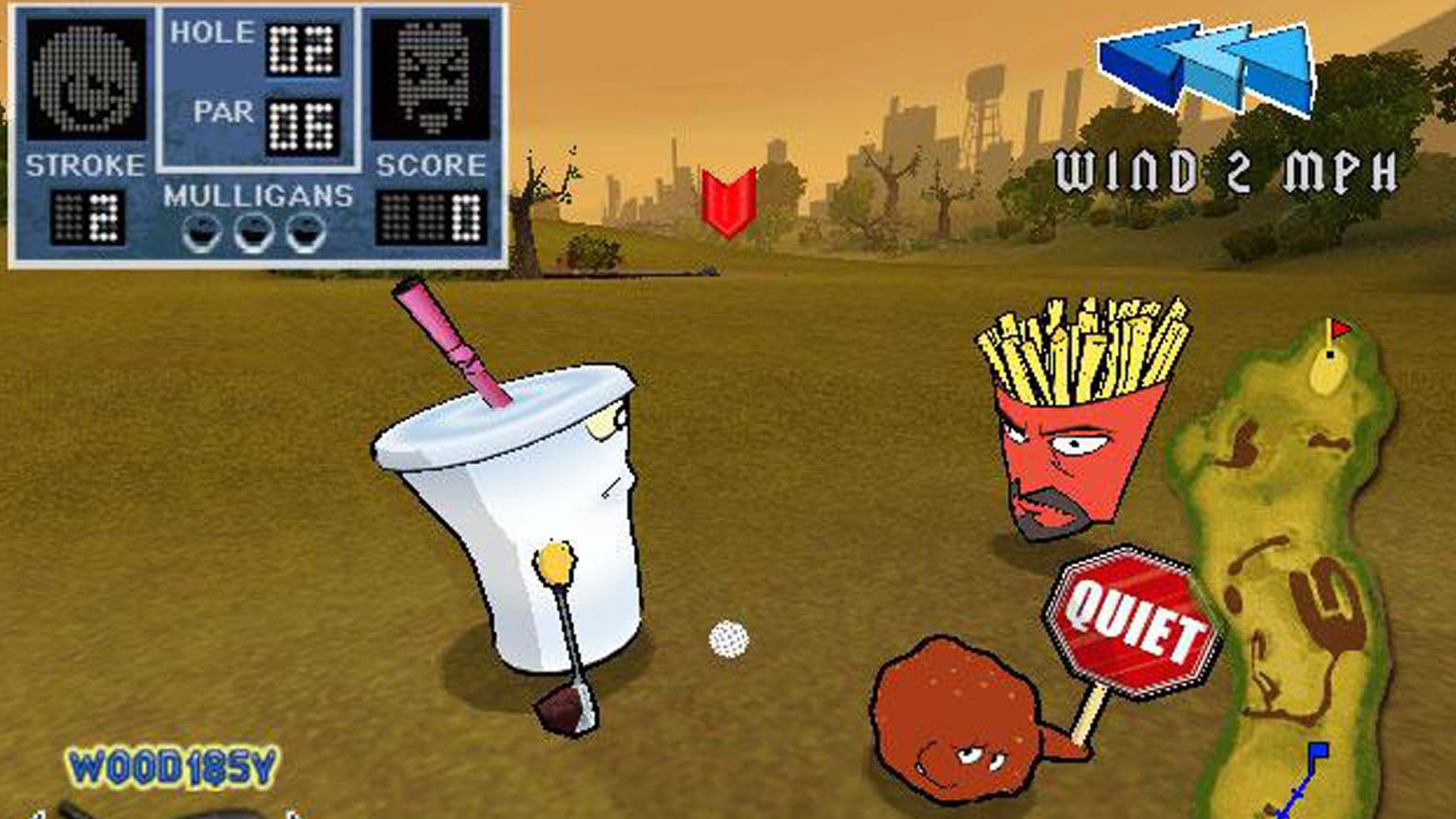 ATHFZNPA also features on-foot combat with enemies, including radioactive living trees and giant crabs that were originally found on their neighbour Carl. Combat controls are simple, having players hit the X button to bash enemies with their golf club.

Does adding mediocre combat to a bad golf game help improve the game? Sort 0f. It at least adds a bit of novelty appeal to the game. It also feels true to the show. Of course Master Shake and the gang go to a golf course and start getting into fights. Honestly, compared to some of their other adventures this is fairly tame. But you don’t just fight enemies and play golf. Ninja Pro-Am also includes kart racing!

At certain points in the game’s short campaign, players are forced into a race against different enemies. Using golf carts, the trio of living food items speed across the course to win. Similar to the combat, the kart racing sections are simple and serviceable. Though like the combat, it at least makes the game feel even weirder and different.

Many of the villains and other characters from the show appear in Ninja Pro-Am. One of my favourite villains from the show, Cybernetic Ghost of Christmas Past from the Future, is one of the two commentators who provide introductions to each of the various golf courses. The other commentator is ESPN’s very own Scott Van Pelt. I’m not sure how the developers got him to do this, maybe he really liked the show?

Regardless of how he ended up in the game, he adds a perfect amount of reality to the proceedings and pairing him with the absurd Cyberntic Ghost is wonderful.

That is the main reason to play this game or at least to look up the cutscenes on YouTube. The writing and voice acting feels like it was ripped out of the show. Many of the cutscenes were actually included on the season 6 DVD of ATHF. These scenes and the commentary intros are easily the best part of the game, assuming you like the show.

If you hate Aqua Teen Hunger Force, you will hate this game and probably more so than I did when I played it years ago. I at least was able to enjoy the comedic cutscenes between the boring golf gameplay and dull combat. If you just can’t stand the show or find it dumb, this game is going to be a miserable and annoying mess to play.

While (deep breath) AQUA TEEN HUNGER FORCE ZOMBIE NINJA PRO-AM is a bad game. It’s also the kind of game we just don’t get anymore. Licensed games are now found mostly on mobile phones. Which is fine, I enjoy some phone gaming. But I miss these awful and strange games based on TV or movies we used to get on consoles. Maybe they weren’t great, but they had a sense of personality and quirkiness to them that most licensed games today lack.

If you can find a cheap copy of Ninja Pro-Am for PS2 and enjoy the show it was based on, I totally recommend checking this game out. And if you don’t have a PS2 or can’t find a copy, you can find all the cutscenes up on YouTube and they are certainly worth a watch for fans of ATHF.