Daredevil’s Return Strips Matt Murdock Down To His Core (Again)

This week, 55 years after the Man Without Fear first debuted, Matt Murdock is back in action after a little time spent away (everyone thought he was dead, but he wasn’t — and even if he was, this is comics, you know the drill!) with a relaunched Daredevil series. Which means, once more, it’s time for him to be Born Again.

Matt Murdock’s entire comic book legacy is about having everything taken away from him bit by bit until all that’s left is the raw core of who he is as both a man and a superhero.

Every run on Daredevil is almost like an elaborate joke each team plays on the next of just how much more excruciatingly miserable they can make Matt’s life before leaving the book for a new team to sweep in, build his life back up, and inevitably continue the cycle by setting up the path to take all those pieces back off the board again.

It’s like the longest game of checkers and everybody that’s Not Matt Murdock wins. 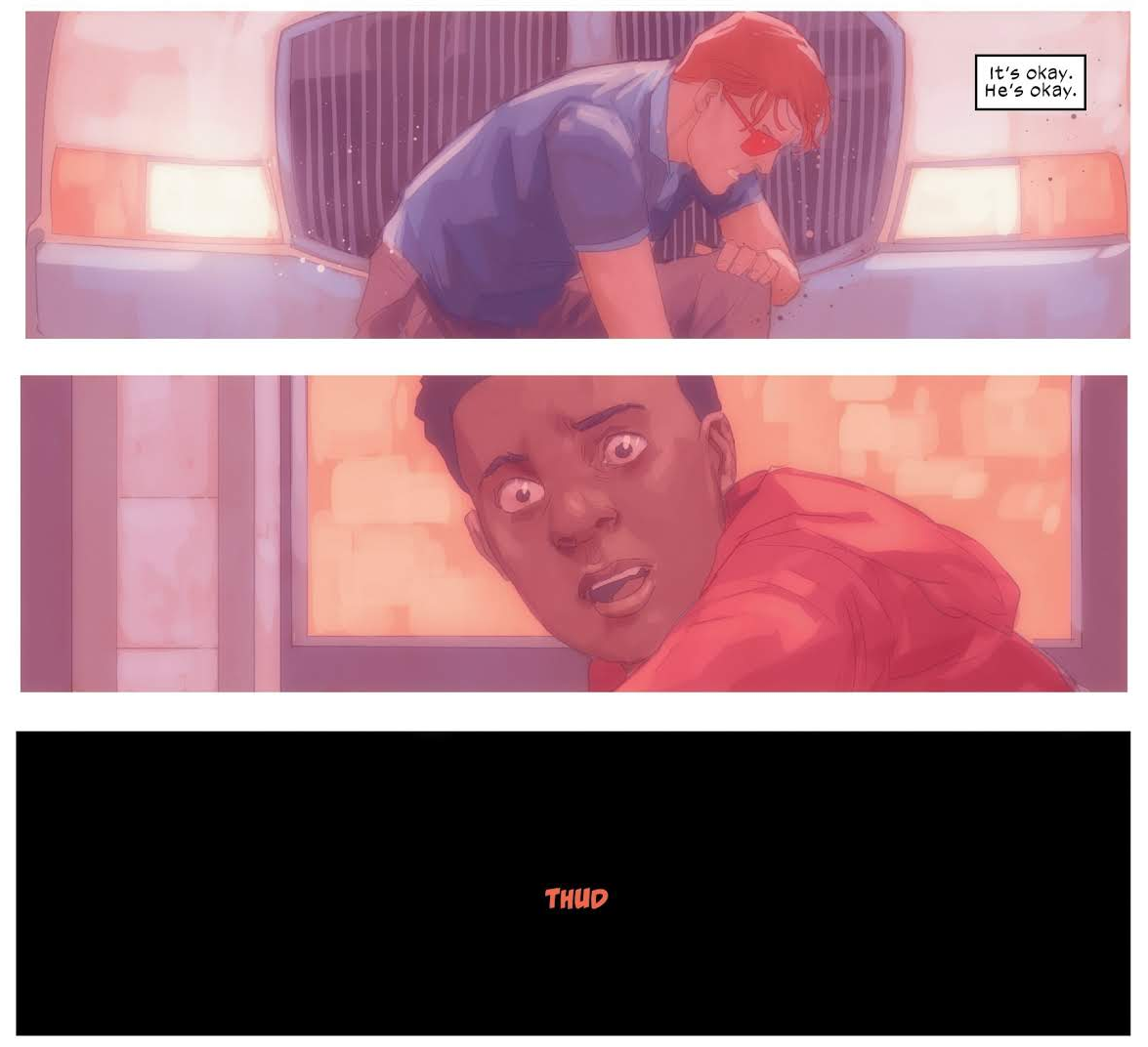 Primarily, because Matt’s fleeting victory in having exposed Mayor Wilson Fisk as the corrupt Kingpin of Crime turned out to be a coma-induced dream. A coma induced by the fact that Matt literally got hit by a goddamn truck saving a kid.

Like I said: Matt Murdock’s life? Pretty bloody miserable, most of the time!

That hasn’t changed in Daredevil #1, as we meet a Matt still under the thumb of being a wanted man in Fisk’s strictly-anti-vigilante New York, but also a man who is, you know, trying to recover from almost being killed by being hit with a goddamn truck.

He’s flashing back to early morality lessons given by his priest as a child, about doing the right thing for your soul in a world where the law and order of the land might not necessarily agree that it’s the right thing.

He’s contemplating personal vulnerabilities as he has one-night stands.

He’s pondering his apartment as being just as much as a cage for who he really wants to be — the Man Without Fear — as his hospital bed was.

And, in true Matt Murdock style, he’s going out as Daredevil before giving himself time to actually recover and heal, getting sloppy because of it, and then moping about that too, wondering how long it’ll be before this push and pull of vigilantism will finally do his crumbling body in for good. 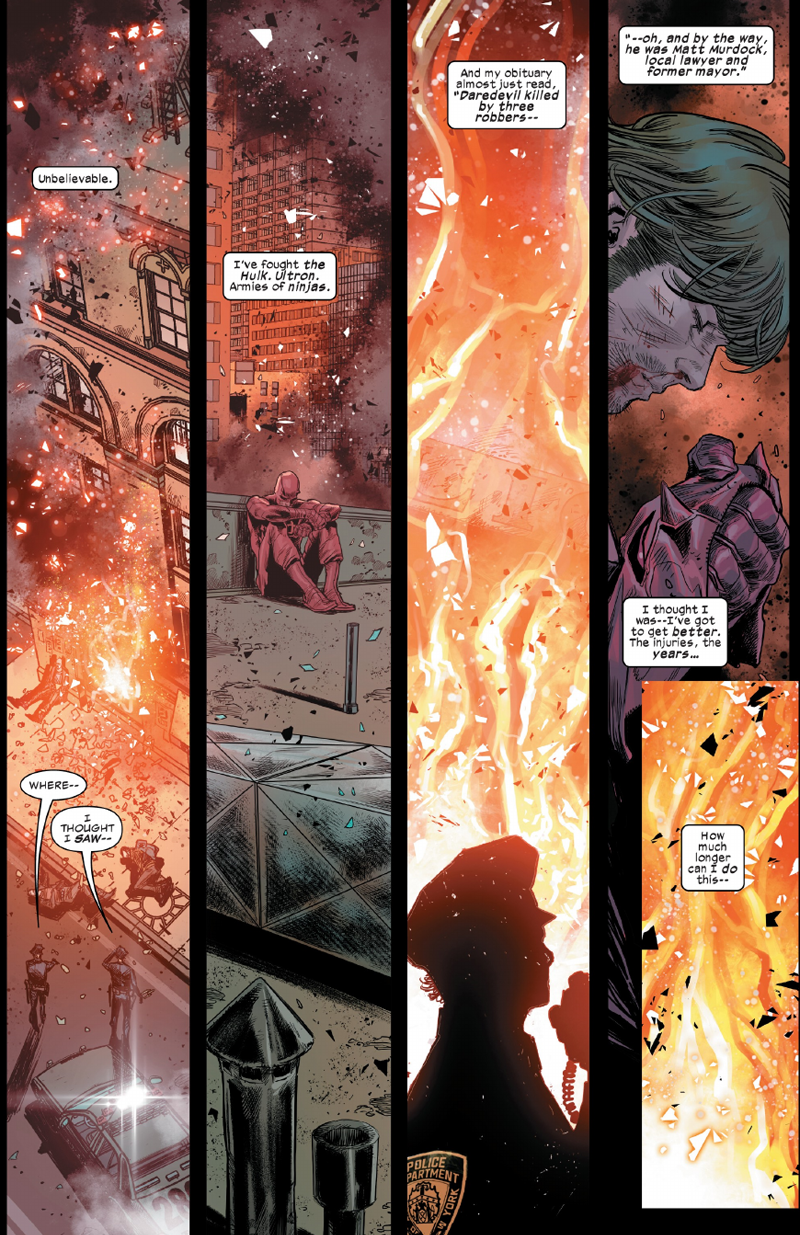 I mean, he did turn 55 this week. He really is getting too old for this crap. (Image: Marco Checchetto, Sunny Gho and Clayton Cowles, Marvel Comics)

None of these, of course, are unique concepts when it comes to Daredevil storytelling. Hell, while we’re speaking of things Matt Murdock has lost recently, if you were a fan of his now-dead Netflix show, you’ll find a good replacement here, with plenty of parallels between this set up and Matt’s arc in the third and final season of the series.

(That third season was itself a loose adaptation of another iconic arc where Matt Murdock loses things close to him, “Born Again”. Matt’s misery is the “it’s like poetry, it rhymes” of Daredevil fiction).

But while it isn’t exactly new ground to tread, it is, in a lot of ways, a pure and quintessential aspect of Daredevil as a series, and it’s executed spectacularly well here. After all, if we’re always building Daredevil up to strip him back down to his core again, at some point, that core is going end up transmogrifying into the very act of that process of stripping down.

Catholic guilt and all, there is a Christ-like nature to Matt Murdock in the way that he sacrifices everything in his self and is reborn anew, albeit Matt’s done it a lot more times than Jesus (the Bible’s rules are a bit different to superhero comics’ in this regard, obviously). 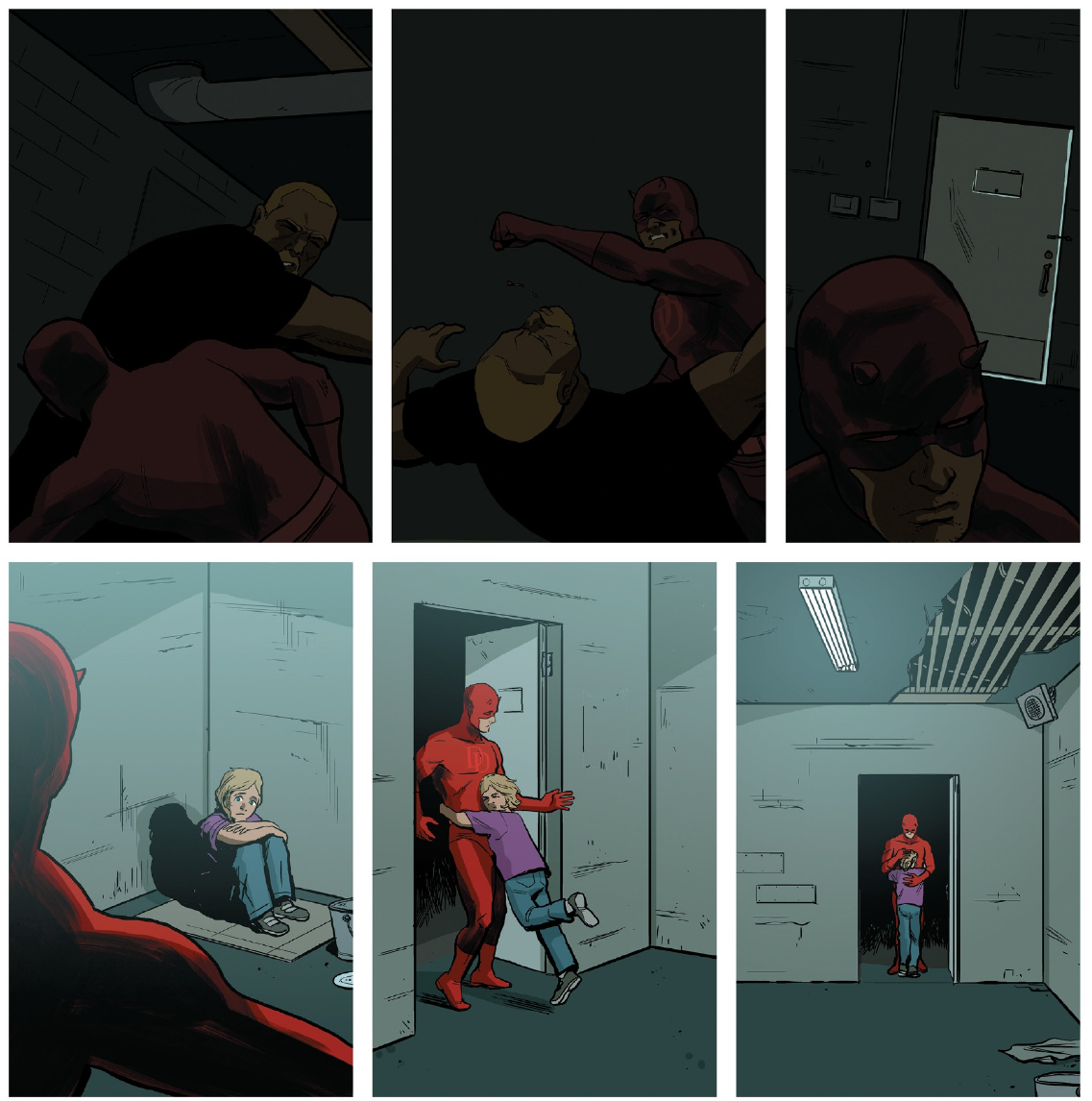 But after the main story of Daredevil #1 concludes on a bleak and dark note — with a broken, tired Matt slumped on his bed, overhearing a news report that one of the criminals he sloppily beat-up that night has died of head trauma — Zdarsky reminds us that this act of stripping Matt down will always reveal to us another, equally important core to Daredevil as a character.

Written and drawn by Zdarsky, “Sense of Self” is a four-page backup story that is deceptively simple. There’s barely any dialogue to it — and all it is is Matt overhearing a criminal holding a child hostage for extortion, and after trailing said crook and fighting him, rescuing the child with a hug.

But really, “Sense of Self” is actually a two-page story, retold twice — once in the way we as an audience see Matt’s world, and then reflected again the page after in a visually slick interpretation of how Matt himself “sees” his world. 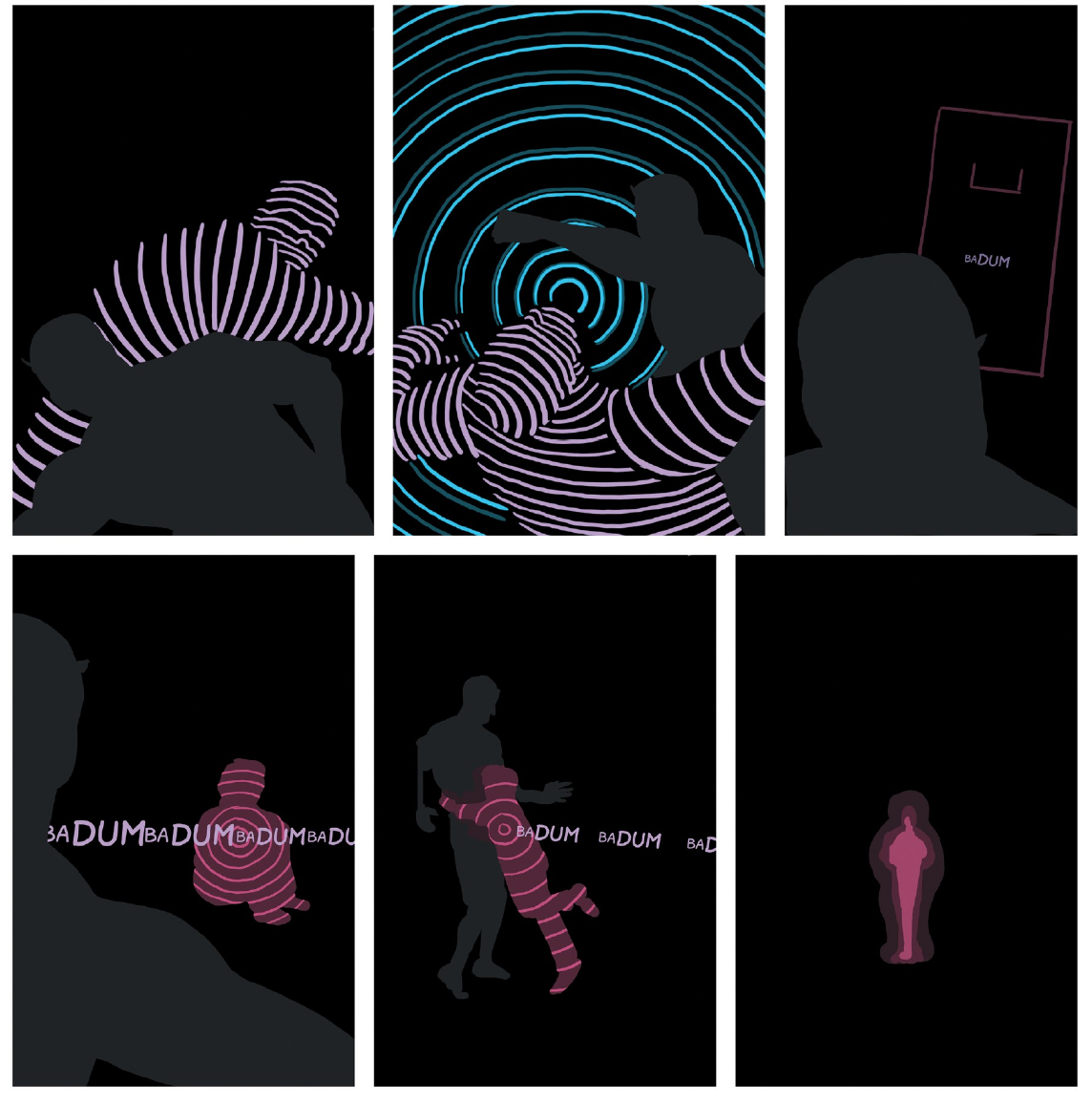 … and then another, from a certain point of view. (Image: Chip Zdarsky, Marvel Comics)

Not only is it a swift reminder of the sort of cleverness that Zdarsky can bring to Matt as a character — the way he sketches out Matt’s world as different colours and radiating lines in a sea of black, structures built out of words, is beautifully striking and a testament to the unique ways the comics can present the ideas behind Matt’s abilities in ways other adaptations simply can’t.

It’s also a reminder, after just reading a comic about Matt foolishly trying to run before he can walk again — and paying a dark price for that hubris — of just why he does what he does in the first place.

It’s a simple and distilled embodiment of the other, brighter, more swashbuckling core of Daredevil that is just as fundamental to the character as his seemingly ceaseless misery is.

In the main story of Daredevil #1, Zdarsky proves to us as an audience that he understands an important core of Matt Murdock’s character, but in “Sense of Self” he highlights the even deeper understanding that there is a light side to that core as well that is in constant balance.

Even as Matt is stripped down once more to his very core, you cannot have one without the other — and now that this new Daredevil run has reminded us of that, it’s ready to begin the process of building Matt Murdock back up once more.