Set immediately after Far Cry 5, New Dawn features only a handful of characters from its immediate predecessor. One of those characters is The Judge, a mysterious creature whose identity players think they have finally cracked.

In Far Cry New Dawn players can find a silent and helpful gun for hire simply named The Judge. This gun for hire never speaks, unlike other gun for hires who will often talk about events happening around the player or locations they visit. The Judge will occasionally make some grunts and groans, but that’s it.

While The Judge might be silent they have still built up a big fan base. A lot of New Dawn players love The Judge. On Twitter and Reddit, fans are sharing artwork of the character and sharing photos with the silent warrior. Some even think The Judge is cute! “Who needs co-op when you’ve got The Judge,” said Reddit user hxcdrummer.

But who is The Judge? The character never talks or takes off their mask, so it takes a bit more digging to figure out who this masked friend might be.

Sprinkled throughout the game, fans can find clues and conversations that heavily hint at the The Judge being The Deputy from Far Cry 5.

The Deputy was the player character from Far Cry 5. They were a young rookie officer who became wrapped up in all the cult killing business of the that game. Along the way The Deputy helped the folks of Hope County fight and defeat Joseph Seed and his deadly cult.

A conversation Carmina has with The Judge seems to be one of the most direct hints of the character’s real identity.

In Far Cry 5 players help Nick Rye and his wife with the birth of their first child, a baby Carmina. In New Dawn, Carmina is now an adult and will mention to The Judge how her parents told her the story of how The Judge, before they were silent and wore a mask, helped during her birth. 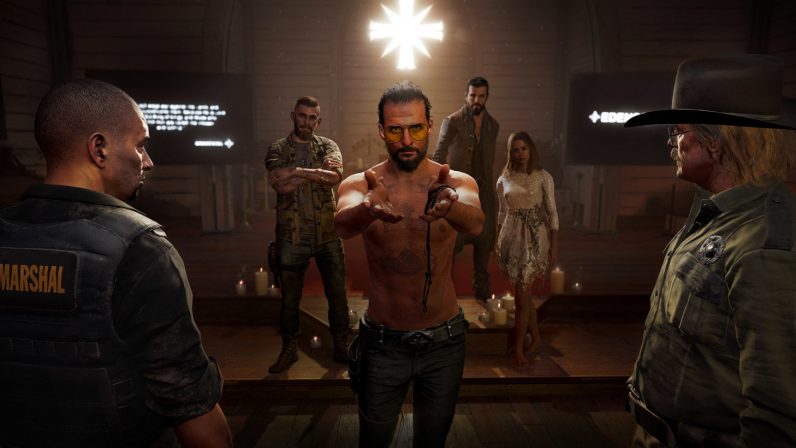 So what happened to the hero of Far Cry 5?

It seems after the bombs fell and destroyed the world, The Deputy became a believer in Joseph Seed. Players can find a note which heavily implies this is the case. In the note it seems The Deputy wants to help “judge” the world and seeks forgiveness and too be reborn. So why does The Judge never speak?

One theory is that Seed and his cult cut the tongue out of The Judge’s mouth. Fans point to a conversation The Judge can have with the granny sniping Nana. She wants to help The Judge which makes The Judge cry. When she asks them to speak and tell her what’s wrong, The Judge just cries more.

Based on all of this evidence and more clues found in New Dawn, it seems certain that The Deputy and The Judge are on in the same. Though Ubisoft hasn’t confirmed this yet. I did reach out to them, but they didn’t respond with an answer.