Find Hidden Skrulls, Take A Trip Through T.I.M.E., And More In The Latest Tabletop Gaming News 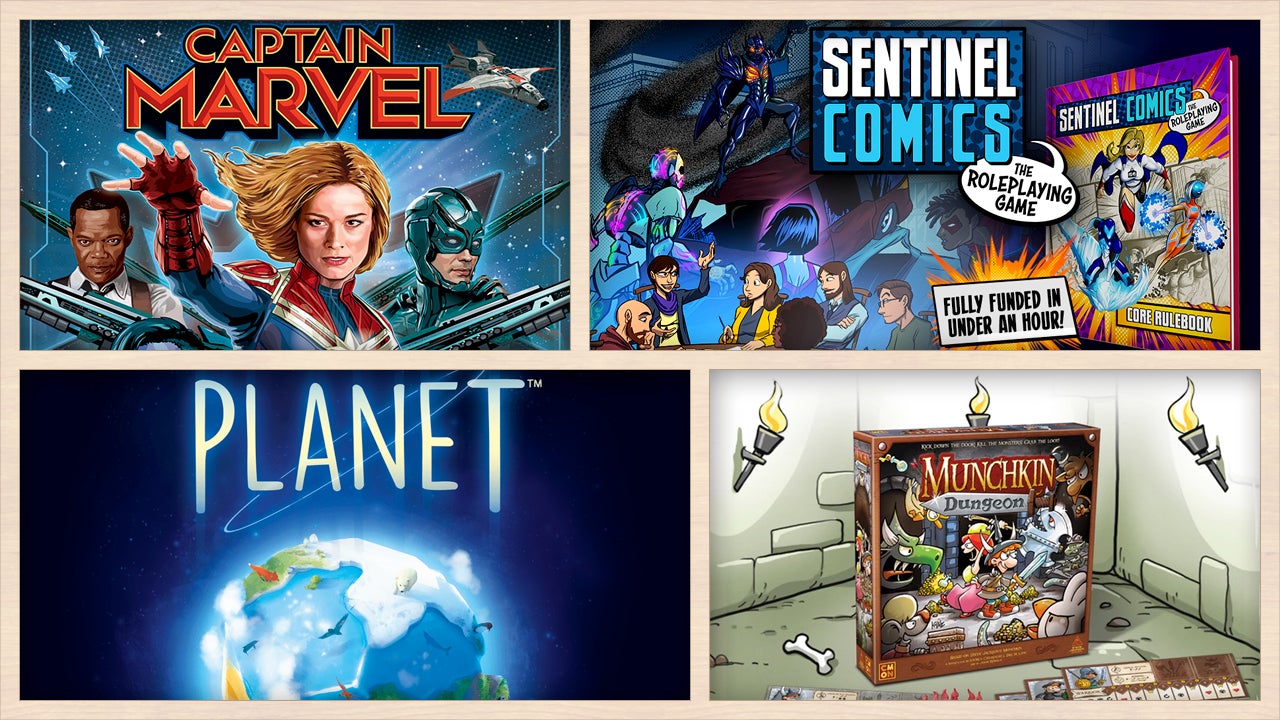 Game art for <em>Captain Marvel: Secret Skrulls</em>, <em>Sentinel Comics</em>, <em>Munchkin Dungeon</em>, and <em>Planet</em>. (Image: USAopoly,Image: Greater Than Games,Image: CMON,Image: Blue Orange Games)
Facebook may have decided that you shouldn’t see the news, but we think you deserve to be in the know with Kotaku Australia’s reporting. To sign up for our daily newsletter covering the latest news, features and reviews, head HERE. For a running feed of all our stories, follow us on Twitter HERE. Or you can bookmark the Kotaku Australia homepage to visit whenever you need a news fix.

We’re getting pumped for New York’s Toy Fair, which should introduce a lot of new and exciting games for 2019 (be on the lookout for our coverage!). However, there are still plenty of things to be psyched about right now, including a Captain Marvel Skrulls hidden identity experience, a card game adaptation of Throne of Glass, and an awesome new expansion for T.I.M.E. Stories that will bring us into a new epic storyline. 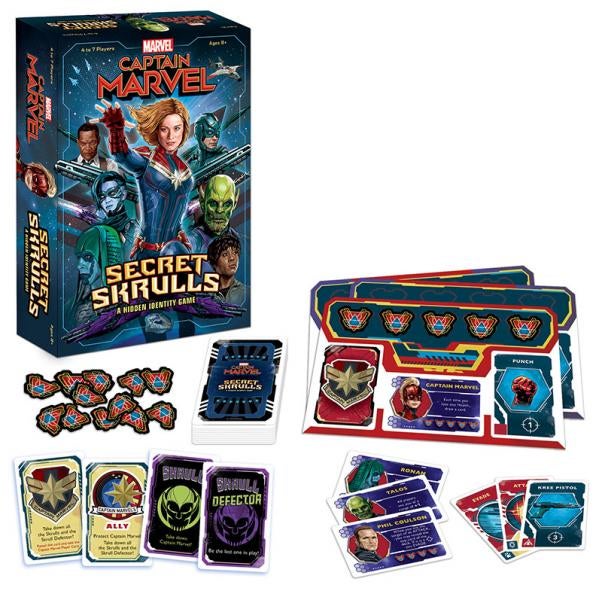 That’s the thing about Skrulls — they could be anyone. USAopoly is bringing the extraterrestrial threat to life with Captain Marvel: Secret Skrulls, a hidden identity game where players take on the role of different characters from the upcoming Captain Marvel, using social deduction to figure out who’s actually a hero…and who’s secretly a Skrull.

Captain America: Secret Skrulls is set to come out early 2019, in anticipation of Captain Marvel’s release in March.

As reported by Dice Tower News, Opaque Industries has released a new tabletop roleplaying game called Song of Swords. Taking place on the continent of Vosca, the low-fantasy roleplaying game takes inspiration from real history, incorporating the use of more realistic arms and armour against a slew of deadly creatures.

The game also encourages players to take on a level of actual fantasy that they’re more comfortable with — whether it’s incorporating magic, elves, and other high-fantasy elements, or having it set in a world with no magical elements at all. Song of Swords is currently available on DriveThruRPG. 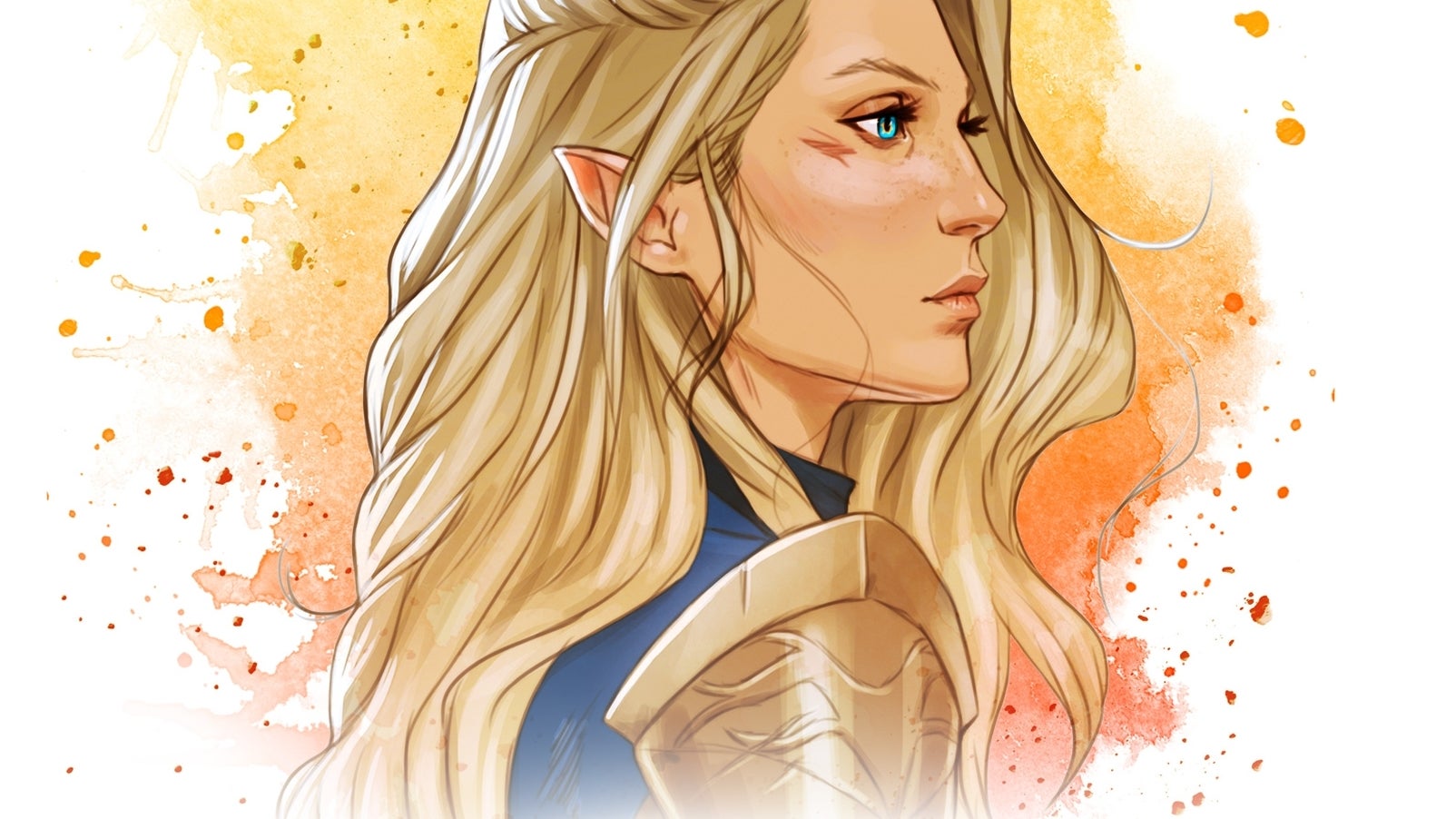 Embers of Memory: A Throne of Glass Game

Embers of Memory: A Throne of Glass Game is a two-player cooperative game; players help series protagonist Aelin Galathynius as she undergoes one of the toughest challenges of her life in her road from slave to assassin, and eventually queen. Embers of Memory is set to come out this October.

Blue Orange Games has announced a release month (as reported by Dice Tower News) for its latest release, Planet. The game is about players creating their own hospitable planets for animal life to flourish, choosing the right terrain and settlements to encourage growth. What’s cool about the game is that every person is given their own “planet core,” which looks like a d10 dice, and that’s what they build on to create their own ecosystem. Planet comes out this April.

More than just a name, Wiz Kids new Sovereign’s Chain card game has two to four players building a chain of cards that come in two different suits: stars and planets, as well as a small deck of event cards that affect how the 30-minute game plays out. Players work to build tiny galaxies by adding cards to their own chain, or an opponent’s chain, that can have positive or negative effects on a player’s progress.

Cards that are played can be dropped face up so they’ll have an immediate effect, or left face down to come into play later. The game is over when one player succeeds in building a seven-card chain, but the winner is instead then decided on a points system. Sovereign’s Chain will be available come August.

Available in June, Wiz Kids’ Europa Base Alpha stars Jupiter’s most famous moon. Two to four players use their own game boards, 36 die, and 92 cards to build a series of remote outposts and bases on the moon, including comm towers, command centres, bunkers, transports, and missile silos — because where’s the fun in colonization if there’s not a competing group of settlers you want to wipe off the map? After about 45 minutes, the player with the most bases and points is declared victorious.

Last week the New York Post reported that a Los Angeles federal judge handed down a verdict in Hasbro’s favour regarding a lawsuit over who owns the rights to the classic board game, The Game of Life.

The widow of Bill Markham, who was hired by Reuben Klamer and Milton Bradley to create a prototype for the original version of the now classic board game, claimed Klamer took all the credit and cut her husband out of millions of dollars in royalties. The federal judge ruled that while Markham’s work helped to collectively create the game, ultimately the copyright was still owned by those who had hired him, and so was not due any additional compensation. 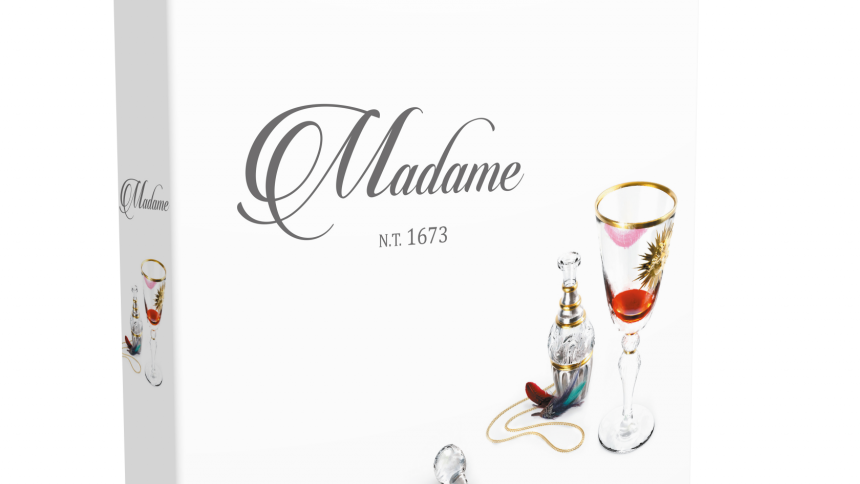 Madame is the latest expansion for Space Cowboys’ T.I.M.E. Stories, a board game where players play “temporal agents” who are sent to different eras of time to relive other people’s experiences and figure out the best (meaning shortest) way to complete their mission. It’s kind of like Assassin’s Creed, with a bit more roleplaying.

The new expansion is part of “The White Cycle” storyline, taking place in Versailles and Paris. According to Dice Tower News, this expansion sets up a major shift in game’s overall story, which will be known as “The Blue Cycle.” No U.S. release date has been announced, but one is expected. 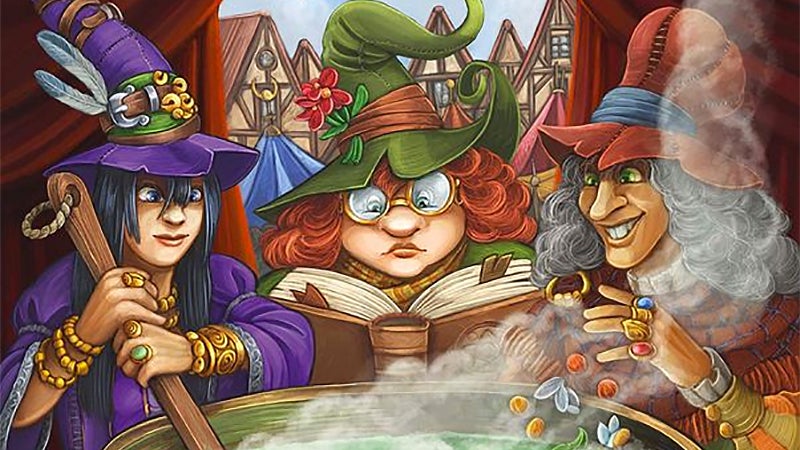 The Quacks of Quedlinburg: The Herb Witches

The perils of capitalism have inspired many classic board games; Monopoly really only gets fun when you’re in a position to bankrupt your opponents. In Schmidt Spiele’s The Quacks of Quedlinburg, players take the role of deceitful doctors competing to brew up the most profitable snake oil remedies to sell to the residents of Quedlinburg.

There’s no word on when an English language version will reach our shores, but the game’s new Herb Witches expansion adds five-player support, as well as new recipes and ingredients that increase the risk of a quack’s brewing pot exploding. 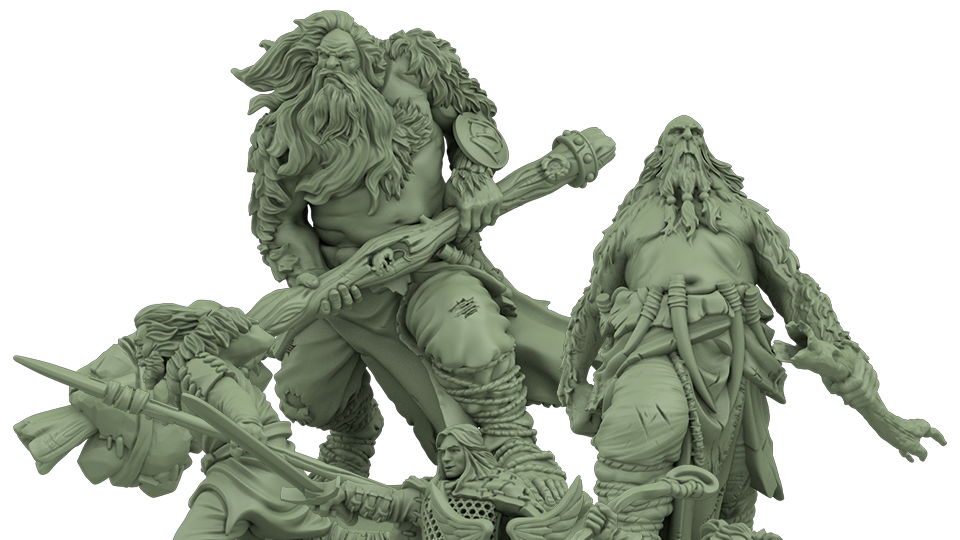 Get ready to head North of the Wall for a whole new battle. CMON has recently released the new Free Folk Starter Set for its Game of Thrones-inspired tabletop miniatures game — featuring a whole new group of fighters who play on their own terms, trying to secure the freedom of the North. And yes: They also come with giants.

Renegade Game Studios continues to expand and bolster its popular capitalism simulator, Bargain Quest, where players compete to stock their storefronts with goods like weapons and armour that will entire heroes to shop and, in turn, protect these stores from monsters.

Pocket Box Games of the Eighties

Steve Jackson Games is working to revive one of the legendary game designer’s most famous projects: the Pocket Box. Designed to be the size of a paperback book (so it was portable), the Pocket Box held several roleplaying games created by Jackson himself, including Illuminati, Ogre, Car Wars, and Crash City, among many others.

Pocket Box Games of the Eighties is not only a cool collectors’ piece, it’s neat for those wanting to take a trip back to the roleplaying games of yonder. It’s already been funded, and will be on Kickstarter through March 1.

The original Munchkin card game was created to bring the fun of dungeon-exploring roleplaying games to players who didn’t actually want to deal with all of the roleplaying complications. Players compete to slay monsters and collect magical treasures like Boots of Butt-Kicking, or the Chainsaw of Bloody Dismemberment.

Munchkin Dungeon preserves that simplified gameplay, but instead of just cards, it expands Munchkin with game boards, miniatures, and other accessories.

It shattered its crowdfunding goal, which is a testament to the popularity of the original game, and with a pledge of $83 you can pre-order a copy with delivery expected sometime in February of 2020.

A project years in the making, Sentinel Comics: The Roleplaying Game is a tabletop roleplaying game set in the universe for a fictional comic book company, Sentinel Comics. The company was invented by Greater Than Games for its 2011 cooperative board game Sentinels of the Multiverse, and the creators have been working for years on a full roleplaying game that utilises the fictional company’s many heroes and villains.

The best thing about it is that it’s a world without limits, as you can create anyone you want and bring your own stories and characters into the ever-growing world of Sentinel Comics. The project has already been funded, and will be on Kickstarter through February 22. 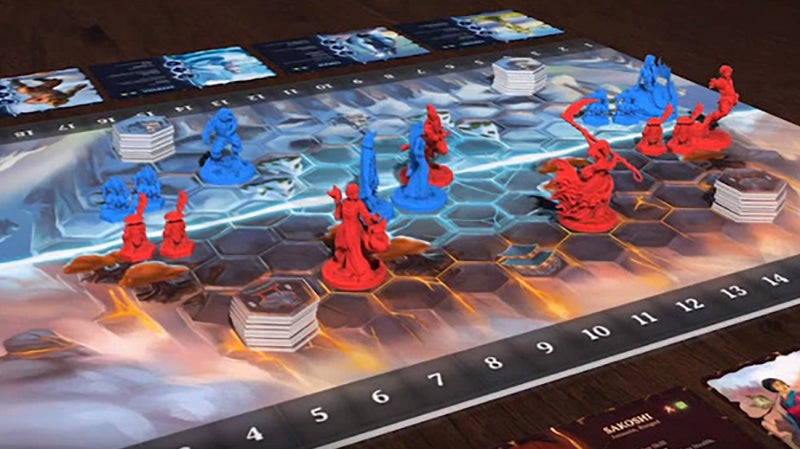 If you’re secretly really just into tabletop gaming for the miniatures, Skytear, which hit its Kickstarter crowdfunding goal in just a day, includes over 50 detailed characters, in addition to 275 illustrated cards, and other gaming accessories.

Inspired by multiplayer online battle arena video games, like StarCraft’s Aeon of Strife map, Skytear has players relying on autonomous armies that assist in their overall quest, instead of individually controlling and customising multiple characters. The cheapest version of the game will set you back about $100 for the pre-order, with delivery expected closer to December later this year, but around $200 will get you the whole kit and kaboodle.

It’s time to face the facts: Walls are rarely effective security tools, and Beyond the Wall from Twilight Creations is a prime example of that. It’s another board game packed full of zombies and the undead, as well as those trying to stop them from taking over the world. But in the middle of the game board and the battlefield is a wall separating both sides.

It’s a barrier, but also a strategic tool, as parts of the wall can be removed by players to easily reach their foes — though in the process it can leave their own forces vulnerable. Its Kickstarter crowdfunding campaign is still working toward raising funds, but with a contribution of $65 you can pre-order a copy with an expected delivery of September later this year.

When you’re running a roleplaying game, there are a lot of things you have to manage for your players and it can become a little too much to handle. Sometimes it’s helpful to offload some of the prep work to someone who knows how to do it right.

Legendary Pants is releasing a new book called Ordinary Towns, a collection of small towns and villages that can be dropped into any fantasy roleplaying game. Each town has a map and key, description, several NPC character descriptions, and even a few adventures for players to embark on. Ordinary Towns will be on Kickstarter through March 3.