reggie fils-aimetaking names
To sign up for our daily newsletter covering the latest news, features and reviews, head HERE. For a running feed of all our stories, follow us on Twitter HERE. Or you can bookmark the Kotaku Australia homepage to visit whenever you need a news fix.

In the autumn of 2004, the public perception was that Nintendo was in deep trouble. Going into the company’s E3 presentation in Los Angeles that year, fans wondered which of the company’s heroes might appear, in its time of need, to save it. Mario? Link? As it turned out, they did get a new hero, though not the one they expected.

In reality, Nintendo was never truly “doomed”. The company consistently turned a profit every quarter even in the GameCube era, and had a cool $US6 billion ($8 billion) in the bank.

But it is true that, in 2004, its cultural cachet was at its nadir. The conventional wisdom held that games were “going Hollywood”, with mature, adult-oriented stories replacing all-ages entertainment as the key driver of profits.

Nintendo’s GameCube console was on its way to coming in last place in the console wars. Game Boy still dominated the handheld market, but Sony was now getting into the space with PSP, which was assumed to be the final nail in the coffin, cutting off Nintendo’s biggest cash cow.

Nintendo’s last press conference, at E3 2003, had been widely considered a downer. The game lineup was weak, with a slow-paced demo of Pac-Man Vs. sucking all the air out of the room. In a word, the mood could be described as “sedate”. Nintendo’s worldwide president Satoru Iwata spoke deliberately but quietly.

The lone American marketing executive on stage, George Harrison, wasn’t much more exciting in his old-school suit and tie. He did get laughs from the crowd when he told them, in an apparent reference to the Grand Theft Auto series that was selling so many PlayStation 2 units, that “Mario will never start shooting hookers.”

That strange, off-colour joke suggested that Nintendo knew it needed to get more aggressive with its messaging. At its rivals’ press conferences, untethered braggadocio was the order of the day.

At the PlayStation event, executive Kaz Hirai wore a PlayStation-blue shirt unbuttoned at the top and declared the console wars “over”. “There’s a place where you can find the other video game consoles, and that happens to be in the rear view mirror,” he said.

Over at the Xbox show, the execs didn’t exactly have huge sales to boast about, but they had a vision of the future that they promoted aggressively.

Dressed in all black from his leather jacket to his presumably expensive jeans, J Allard told the crowd things like “We’re gonna jack you into the online universe like no other company can.” (This is how people talked in 2003.) They finished off the show with a high-intensity trailer for Halo 2.

All this is to say that what happened at E3 2004 didn’t come out of nowhere. Nintendo clearly believed it needed to match that level of combativeness. This was especially true since these press conferences were quickly turning into internet spectacles, with the advent of live streaming video.

It was becoming less about disseminating information to the media via PowerPoints, and more about holding a pep rally for fans around the world. And neither George Harrison nor Satoru Iwata, for all their strengths, were capable of delivering that kind of intensity.

Enter one Reginald Fils-Aime, hired by the company at the end of 2003 as its new executive vice president of sales and marketing. He wasn’t a tech guy, but a marketing wunderkind who’d spent time at Pizza Hut and VH1.

This was the first time anyone had ever laid eyes on him, and instantly, you knew something was different. He was tall, broad-shouldered, wore a black T-shirt under his loose-fitting jacket, and fixed the camera with a thousand-yard stare.

“My name is Reggie, I’m about kickin’ arse, I’m about takin’ names, and we’re about makin’ games.”

This man, who as far as anyone knew didn’t even have a last name, spoke quickly, as if he had absolutely no time to stop and make sure you got any of what he was saying. The future is here, the future is Nintendo, the train is leaving.

The audience couldn’t quite believe they’d just heard a Nintendo executive say “arse”. But there was little time to think about it, because Reggie disappeared and the trailers started up again.

After a few more game trailers with a lot of explosions and violence, the focus was back on Reggie.

“It is game time,” he said. “A new day for me, and a new day for Nintendo. So let’s get a couple things straight, right off the bat.”

What Reggie wanted everyone to get straight was a response to the “Nintendo needs to grow up” mentality, but delivered in a take-it-or-leave-it tone: “We’re not going to run our company just for hardcore gamers. There are gamers out there who aren’t as knowledgeable as you. Gamers who aren’t your age. Gamers who don’t have your tastes.”

Yeah, we’re going to keep making games for your grandma. Deal with it.

Then came the punches to the competition.

“One of our competitors is a manufacturer in Japan who wants to capture every one of your entertainment dollars, transporting all your content between all your electronics devices on their memory sticks. We’re not that company. And there’s another company who doesn’t care what you do, as long as you do it on their operating system.”

Not very much of this had to do with the console wars, but Nintendo was reminding everyone that there were things that they found annoying about Sony and Microsoft at large, even if they liked PlayStation and Xbox. Big applause.

While Reggie then gave the stage over to George Harrison to bring out the then-requisite PowerPoints full of numbers and data, he returned quickly to get back to his evangelising. Reggie had the honour of unveiling the Nintendo DS, pulling a prototype of the dual-screened handheld out of his jacket pocket and beginning to extol its features. 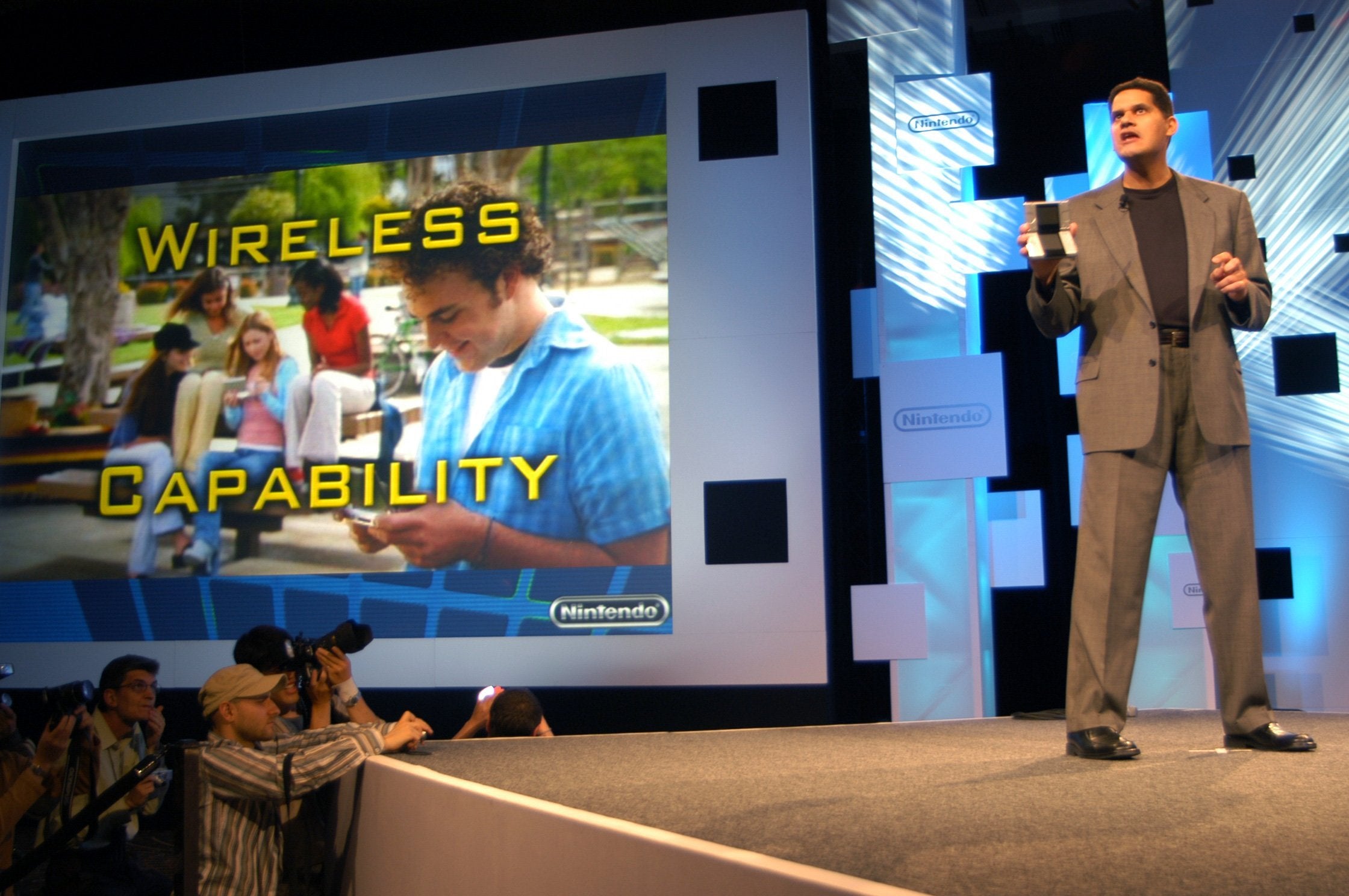 It’s at this point in the story that I should probably say that I was in the room for this spectacle, and the reaction was precisely as you might imagine, sort of a mix of disbelief, nervous laughter, and a growing sense of being on board with this idea that Nintendo was poised to spring back into relevancy, even though that was based on nothing except the delivery of this new executive.

I should also point out something that everyone in the room could hear, but that didn’t come through well over the livestreams: There was a heckler. For some reason, one of the people invited to the show decided to yell rude comments at the stage.

For example, when Fils-Aime said that the DS cartridges would start at one gigabit in size, they yelled back something like, “GigaBIT? What?” If you listen closely to the show on YouTube, you can sometimes hear the muffled sounds of an audience member heckling after some of Fils-Aime’s lines.

Given the rest of the crowd’s universally approving reaction to what was happening on the stage, let’s just say he picked the wrong show to heckle for attention.

What cemented Reggie’s legacy, though, wasn’t something he said, but something he unveiled: The surprise first look at the game that would become The Legend of Zelda: Twilight Princess.

While we now all have a much more nuanced and complete view of the sort of game Twilight Princess ended up being, the trailer that Nintendo cut together for the show gave the impression that this game would pretty much be Link going on a straight-up murder rampage. “Blades will bleed,” read the words on the screen.

It didn’t matter that this trailer didn’t give an accurate view of what Twilight Princess actually was, because it wasn’t really a trailer for a video game. It was just a retelling of the message of the last 45 minutes, for extra emphasis. Link was Reggie and the Moblins were the competition.

The last shot of the trailer was Link fixing the camera with the same scowl Reggie had worn when he talked about Sony. Link was done playing nice, just like Nintendo.

The reactions to this show were swift and lasting.

On the ground at E3, everybody was abuzz over what they’d seen, doing Reggie impersonations and speculating about the new “mature Zelda”.

Online, while Twitter and meme culture were still a few years away, forum dwellers immediately started making Photoshops and spreading around stills of Reggie, the face of the new, aggressive Nintendo.

While he was at meetings later during E3 week, his 16-year-old son called to tell him that he was famous. They were calling him The Regginator, herald of the great Reggielution.

He’d later tell The Seattle Times that the whole shtick wasn’t even his idea, and he had to be convinced to do it.

Later press conferences gradually toned down the bro-ish intensity, but the reputation stuck.

Of the three men on the stage in 2004, it was really mild-mannered Satoru Iwata who was making the bold, brave changes that would bring Nintendo back to the top of the game industry. But it was Fils-Aime who constantly figured out the best ways to get the message of DS and Wii across to American audiences, and who racked up record-breaking sales throughout his tenure.

Along the way, his at-ease nature in front of a camera, willingness to have fun, and charming interactions with fans at live events made him one of the faces of the company, not just in his home territory but around the world. Once Nintendo had gotten back on top, there was no need for the aggressive posturing.

It’s not often that a corporate executive feels as though he has to create a minutes-long goodbye video to his fans when he retires, but then again, Reggie was one of a kind.