From January 23 through February 18 I was confined to a hospital bed, recovering from a surgical procedure that required me to remain almost completely prone in order to heal.

Fortunately I came to the hospital prepared, and managed to still play Kingdom Hearts 3, Jump Force, Apex Legends and Anthem. All I needed was the right gear.

I did not get much gaming done during my hospital stay last year, which ran from March 22 to July 3. I spent the first couple of weeks mostly unconscious. Then it took a good month to get my arms and fingers working properly again.

Once I was as functional as I was going to get, the hospital television was too small and distant to properly game on. I fiddled with my iPad and gamed a little on my Switch, but mostly I just watched commercial television and sighed a lot.

But not this time around. Knowing I was going into the hospital, rather than it being an incredibly unpleasant surprise, made all the difference. Before embarking on my surgical journey, I assembled my arsenal. Here’s what made my hospital gaming good.

Every hospital room comes with a television, most of which will accept an HDMI connection. Most hospital room televisions are also A) quite small and B) too far away. Just look at this setup here. 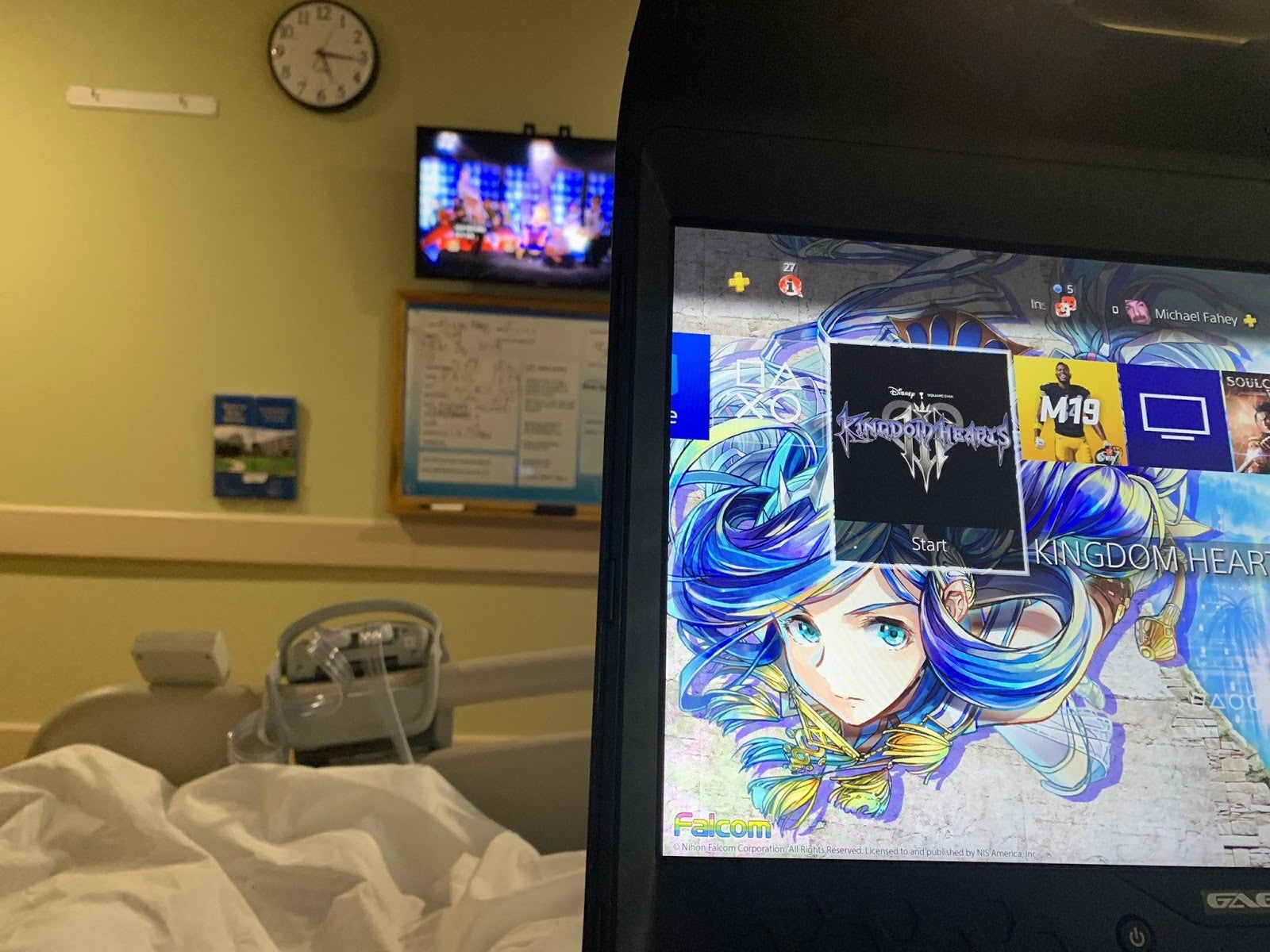 There is no way in hell I could comfortably game on that far-off television set. 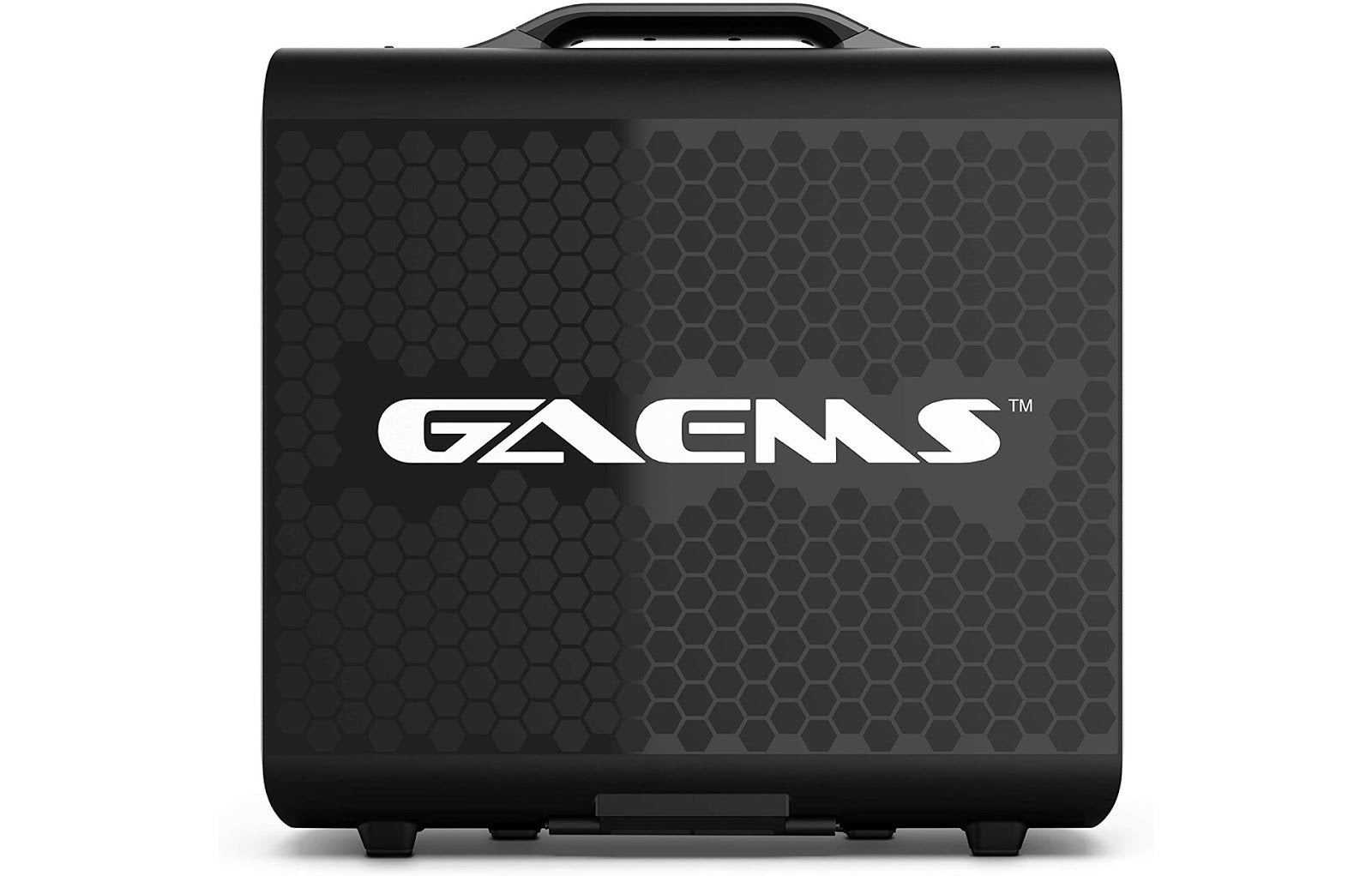 But inside it’s exactly what the company calls it—a personal gaming environment. Inside is a place to securely strap an Xbox One, PlayStation 4 or any standard game console with an HDMI out.

A short included cable connects the console to the top portion of the case, which includes a 43cm, 1920 x 1080 monitor, a pair of fairly nice built-in speakers and dual headphone ports. It even comes with a remote control for power, volume and brightness, which is mighty handy when you aren’t allowed to sit up. 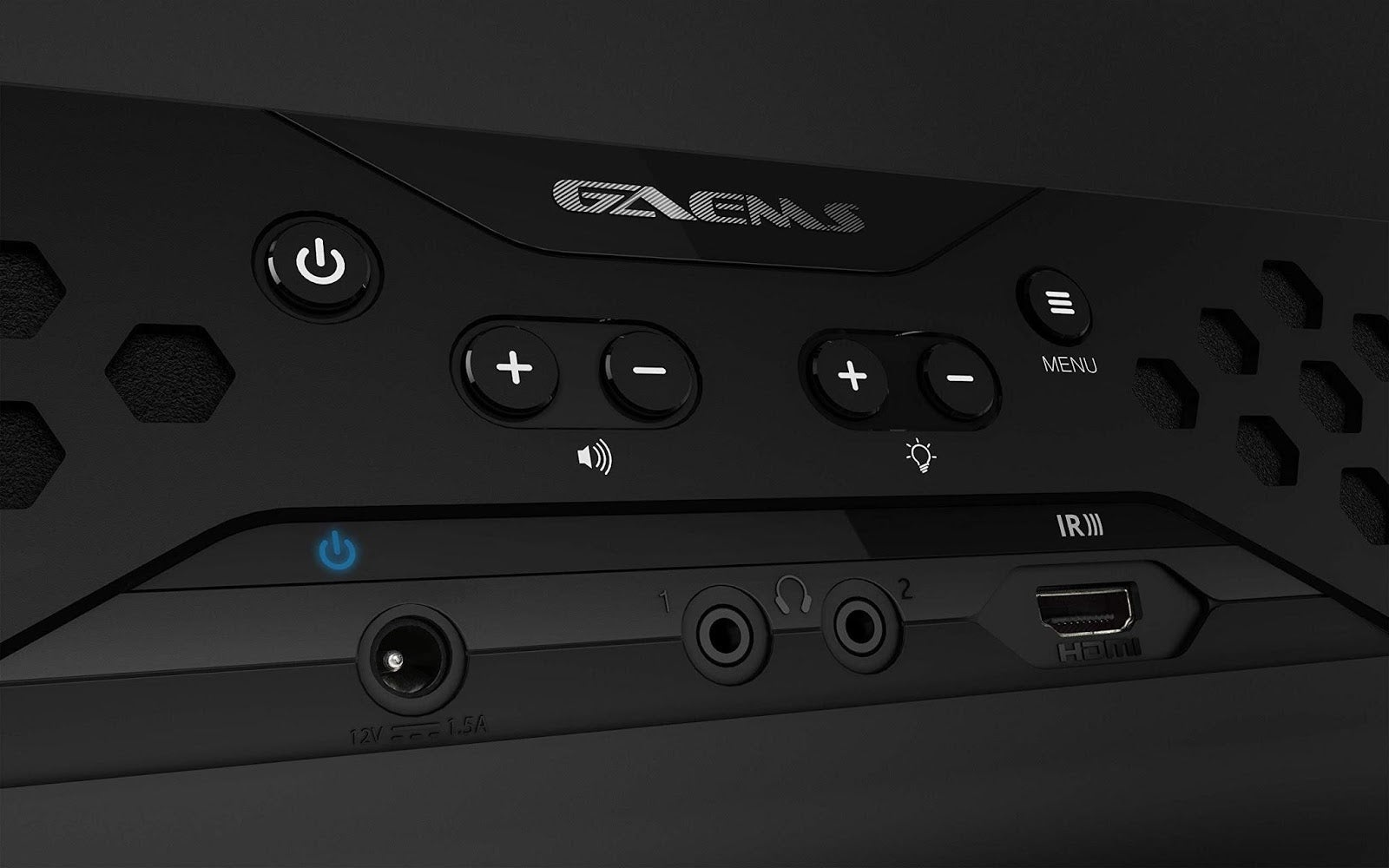 When everything is connected, the Sentinel and connected console become an intimate tabletop arcade. The screen is right in your face, clear as crystal. The speakers are powerful, but not so powerful that they’ll annoy other patients. 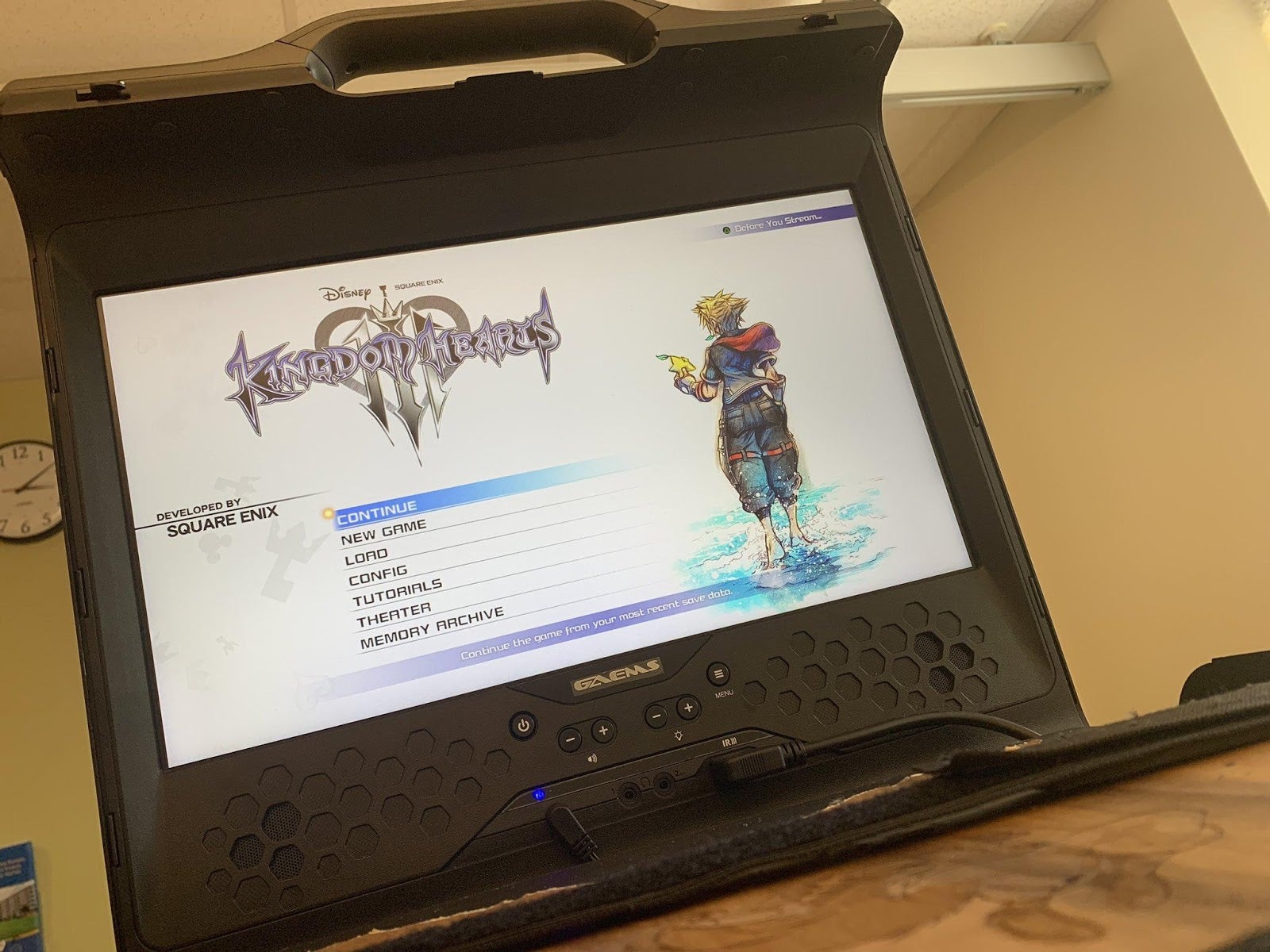 I played nearly 30 hours of Kingdom Hearts III on the Gaems Sentinel, forever linking the game and hardware in my mind. I pre-loaded the game on the Sentinel. I watched the countdown to unlocking on it. I fell asleep a half-hour before midnight, woke up and played the game in the morning following a very bland breakfast. 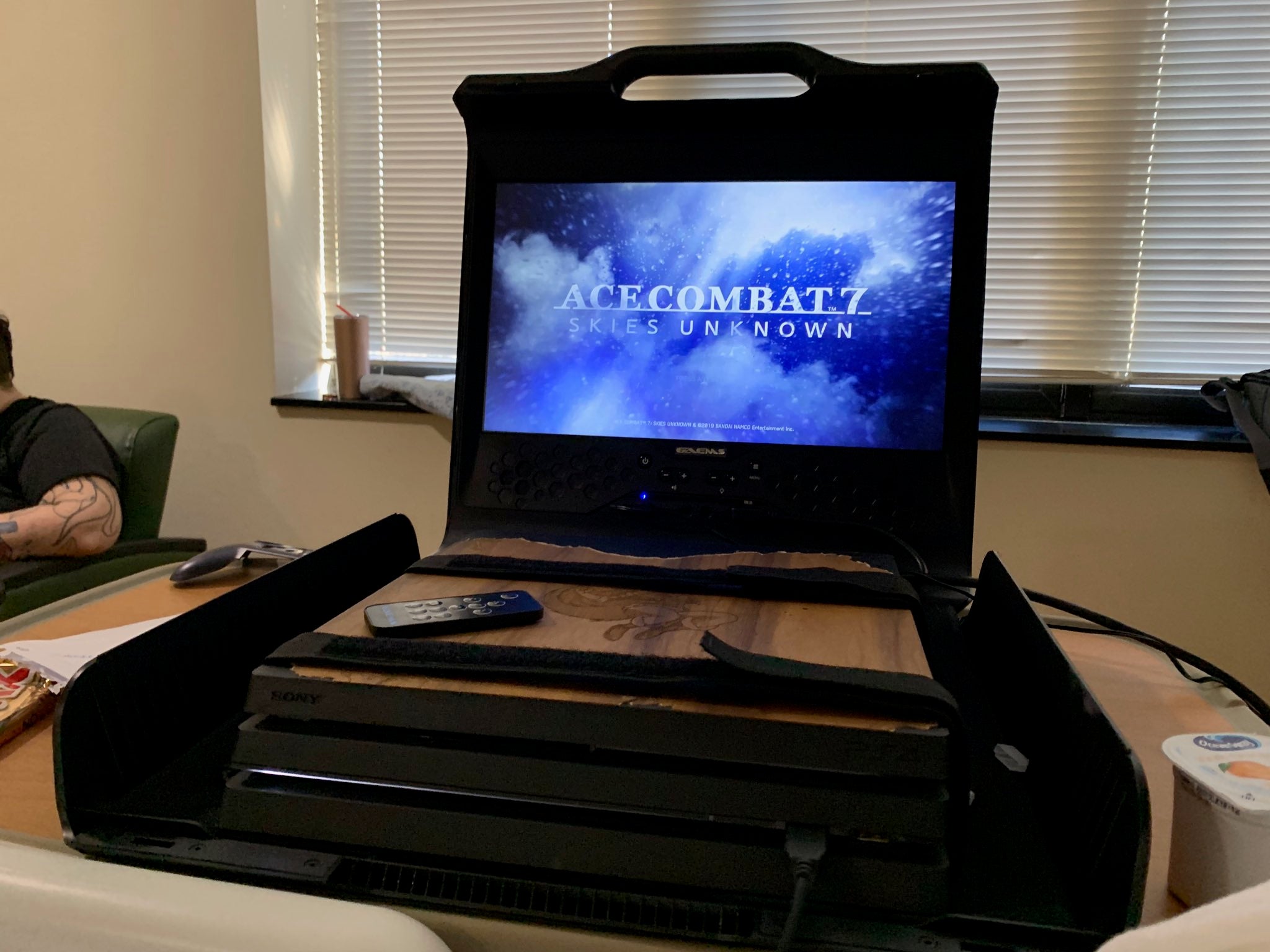 Not only did I play Kingdom Hearts III, I got my Super Bowl Madden fix in, received my daily dose of Hatsune Miku and possibly played a few games I shouldn’t have played in a room with nurses constantly coming and going. 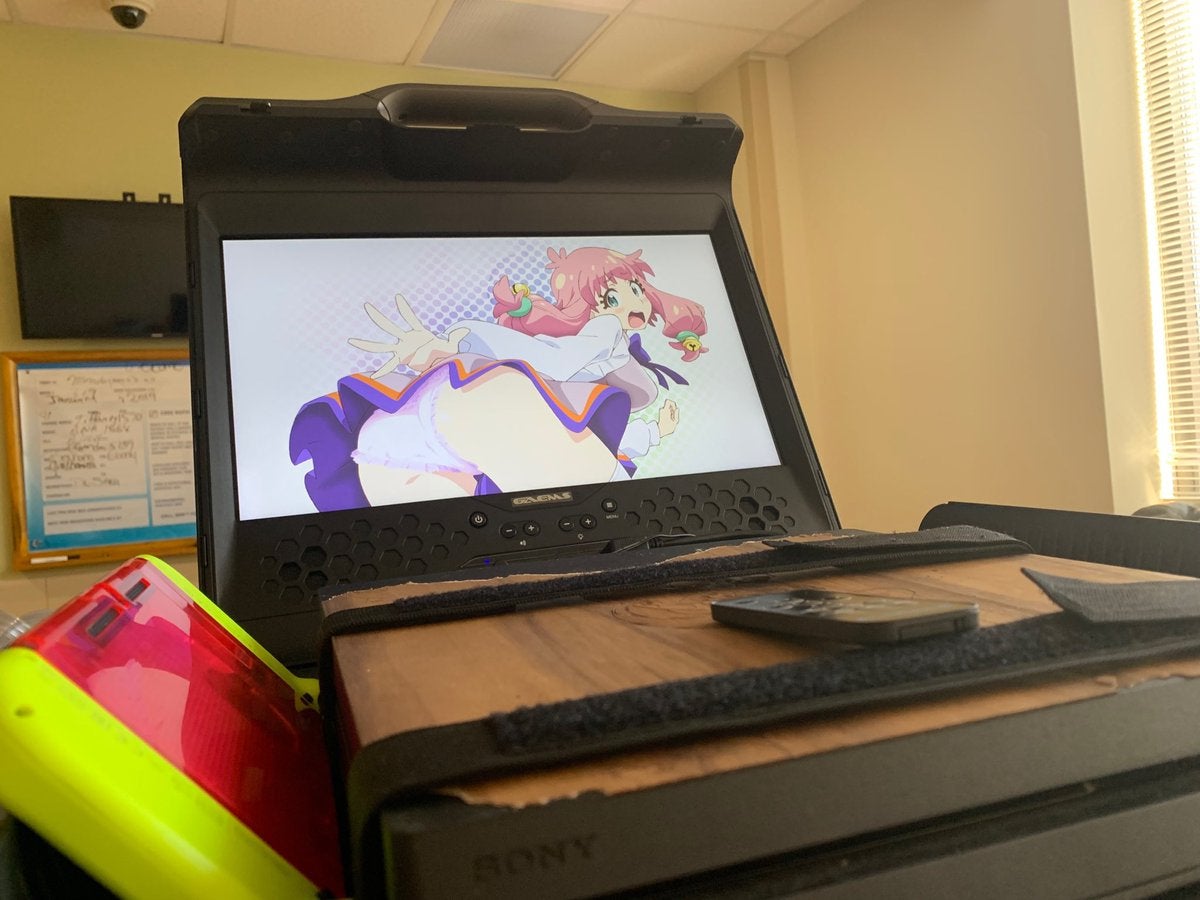 One caveat: The Sentinel draws a lot of attention. Though Gaems has been making these portable monitor cases since 2011, not a lot of people seem to know they exist.

At one point during my stay I had three nurses at once taking pictures of the unit. One wanted one for her kids to play with during family trips, which sounds a lot nicer than playing while recovering from surgery. Either way, the Sentinel was a lifesaver.

Because calling your nurse into the room using a big red button with a cross on it to plug in your charging cable is dumb. 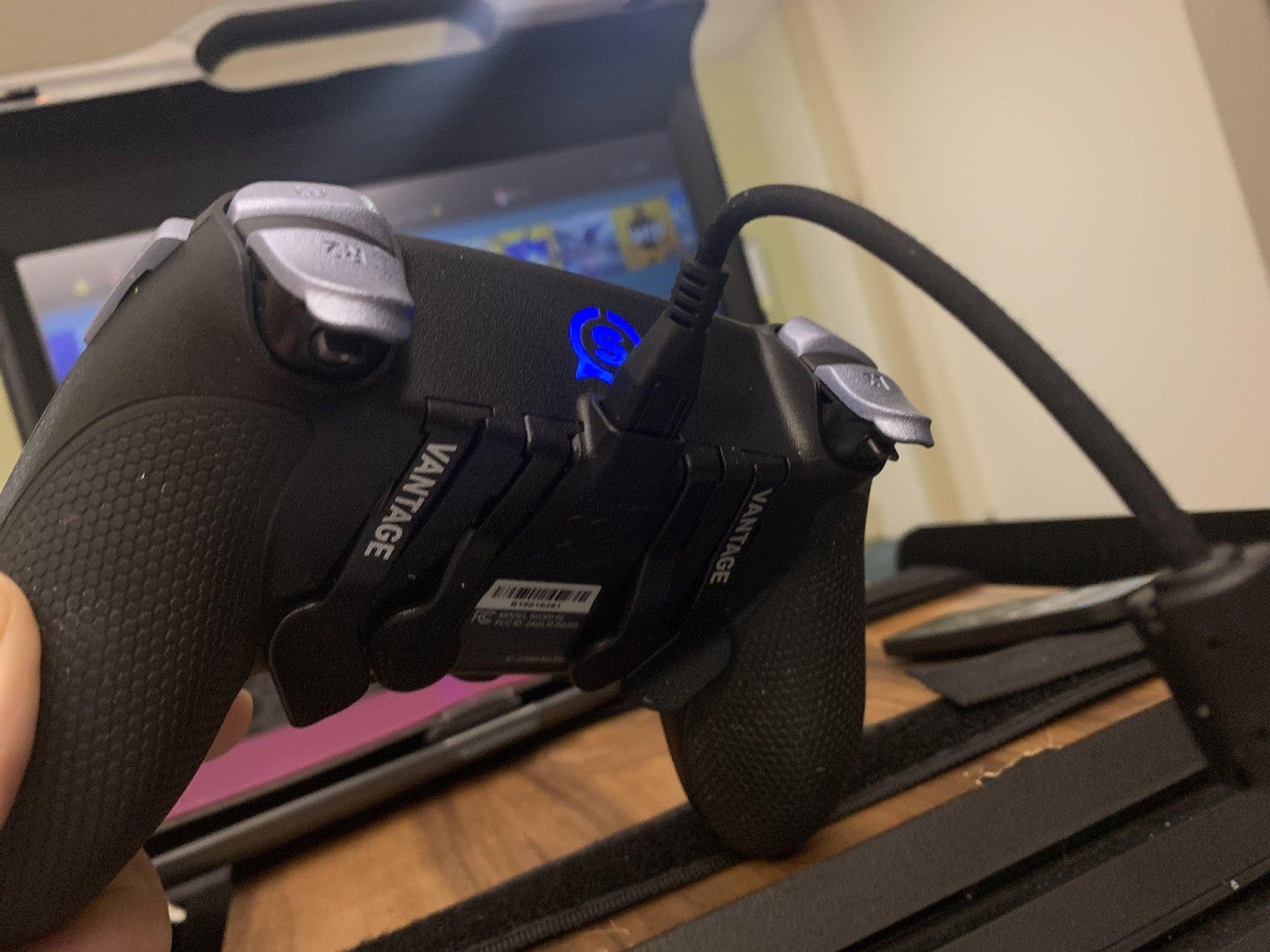 Wireless is best for when the television, PC or game console is far away, but wired is great when they’re a few feet from your face. Your controller stays charged, you know where it is, and if you drop it off the bed you can gingerly pull it back up. It’s like controller fishing!

I opted to bring the Scuf Vantage with me to the hospital for a couple of reasons. It’s the closest the PlayStation 4 has to an Xbox One Elite controller, made by the same company whose tech powers the Elite.

It’s highly versatile and programmable on-the-fly, so if I get an ache or numbness in my fingers, which has happened now and then since my spinal injury, I can use the triggers on the bottom with more capable digits.

While my PlayStation 4 (and Kingdom Hearts III) was the focus of my hospital stay gaming, I managed to smuggle in a few additional ways to play. 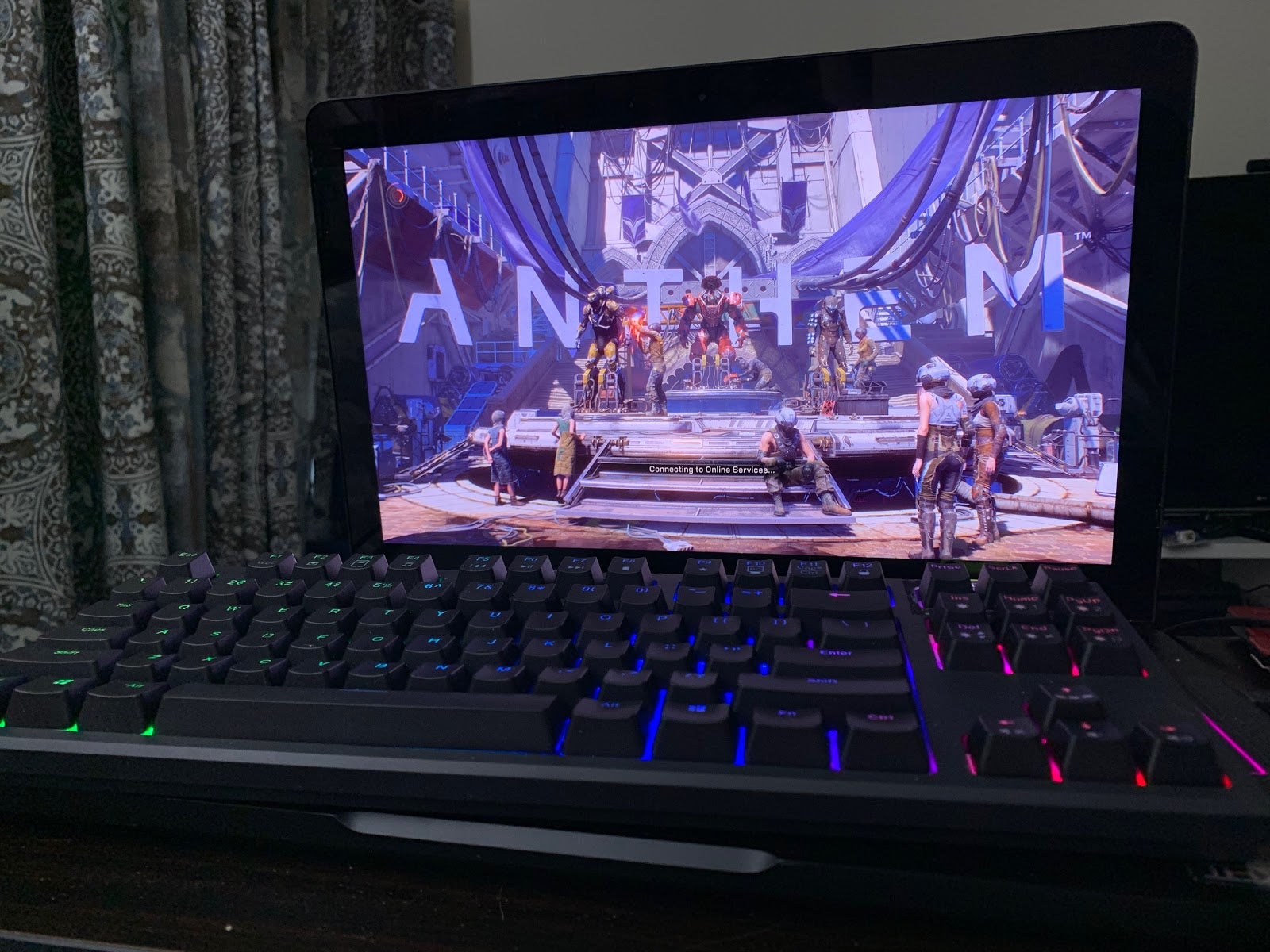 Because you never know when you’ll be stuck in a hospital bed when the hottest new battle royale game launches. Apex Legends came out of nowhere during the second week of my stay.

Thanks to my handy gaming laptop, I was able to load it, stare at the opening screen and then fearfully close it again. I am terrified of battle royale games, but dammit, I had the option to play, and that made all the difference.

Oh, and I guess I played a lot of Anthem as well.

If you own a Switch, it’s likely going with you wherever you are anyway. Can you see my Switch in this photo? 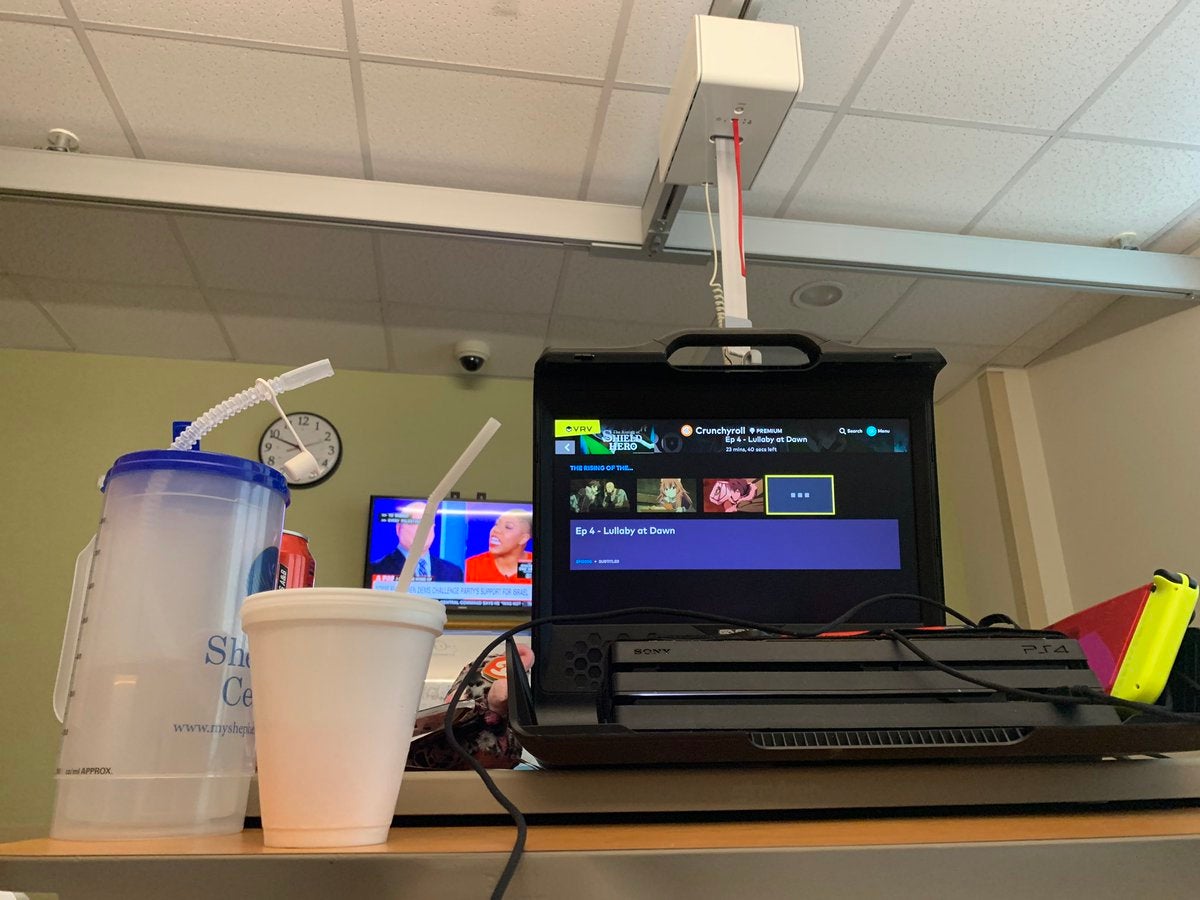 Also good for catching up on anime. How many cups does one man need?

It’s the red and yellow thing off to the right, because I am a fancy lad. I brought the dock with me in case I wanted to hook it up to the Sentinel, but it comes with a perfectly good screen of its own, so why bother.

The Switch got a lot of play during my hospitalisation. Sometimes the nurse and techs left without pushing the table back over my bed, and the Switch was all I had in reach. Then there was last Wednesday’s Nintendo Direct presentation, in which games like Tetris 99 and the Yoshi’s Crafted World demo went live immediately.

Thanks to including my Switch in my ridiculously large hospital bag, I was able to leap on those new games like some sort of gaming gazelle who leaps a lot.

Maybe One Of These 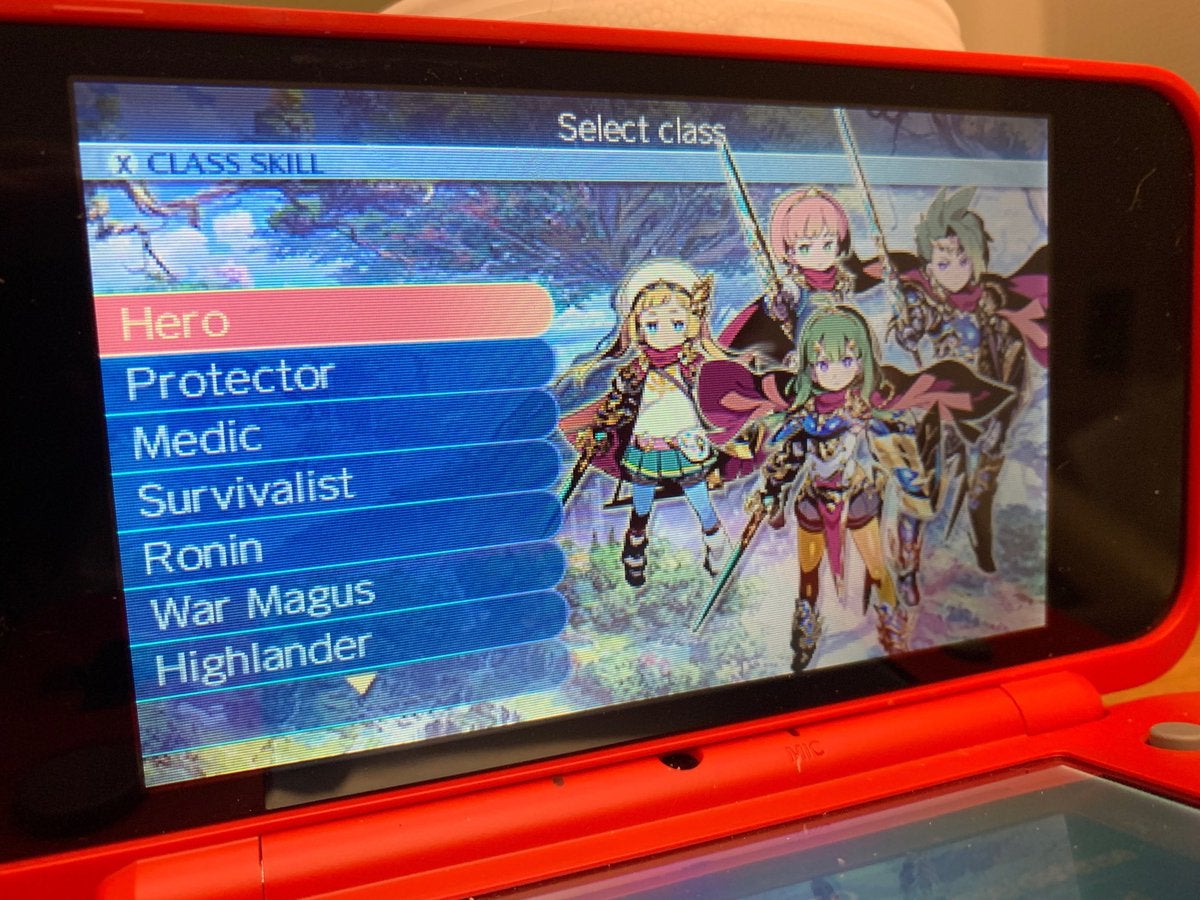 As long as there’s a new Etrian Odyssey game to play, the 3DS family is still alive, no matter what Ethan says. Have you played Mario & Luigi: Bowser’s Inside Story? So good.

While those lovely bits of hardware are the main reason I survived nearly a month of laying flat in the hospital without freaking out, I couldn’t have done it without these additional bits of kit:

Gaming Can Go Anywhere These Days

Whether you are sequestered in a luxury hotel, stuck at an airport or looking for something to do between hospital food and bed baths, gaming doesn’t need to be left behind. With the right gear, you can turn a bogus journey into an excellent adventure. 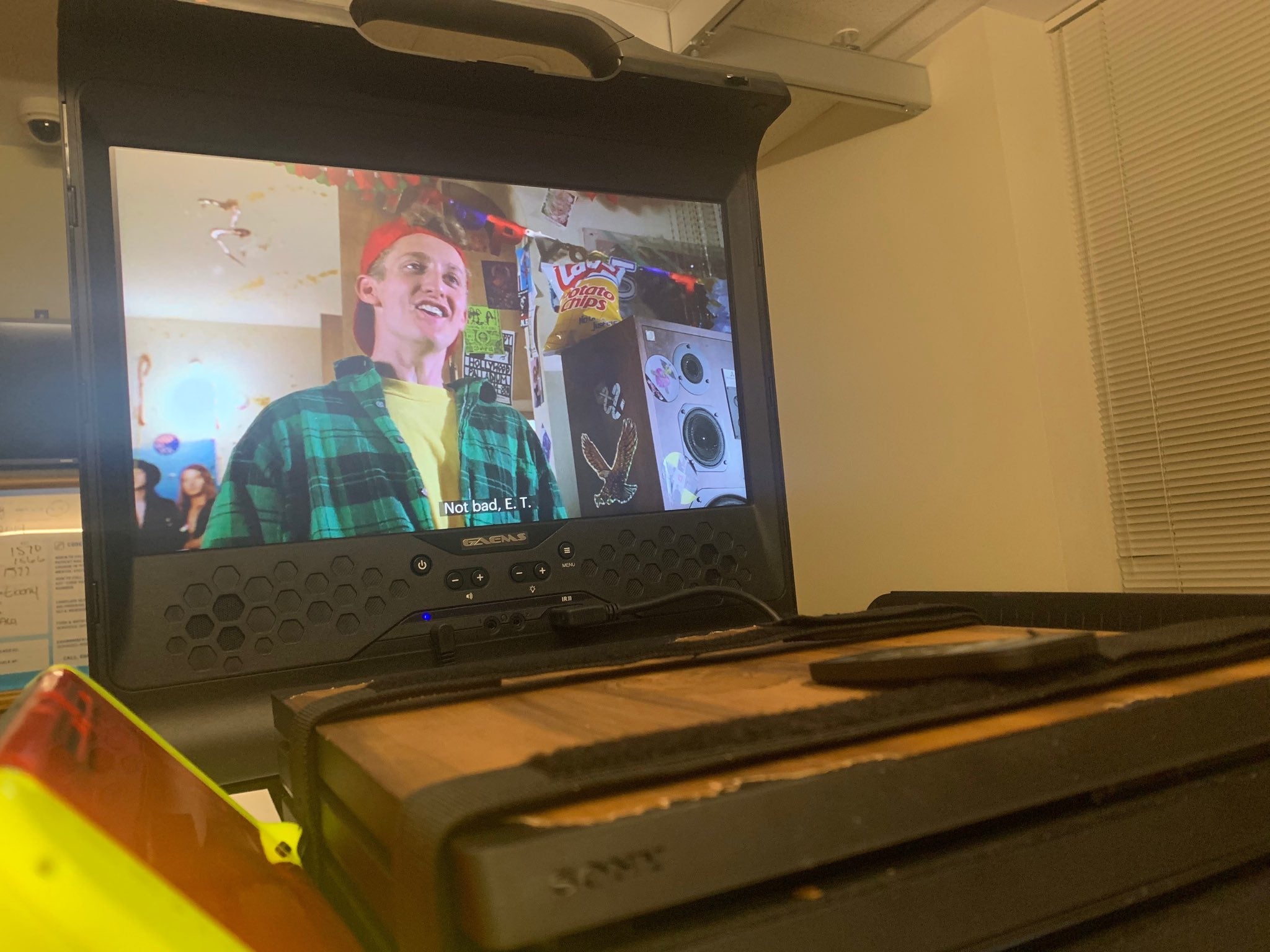 Unless they make you lie face-down. Then you’re kind of screwed.