I Still Think About Detroit: Become Human’s Tales Of Abuse

My wife and I look forward to playing each of David Cage’s games. There were parts of Heavy Rain, Beyond: Two Souls, and Indigo Prophecy that we found fascinating, weaving a unique experience unlike any other. With Detroit: Become Human, I had avoided all articles so I could go in with a fresh perspective.

I knew almost nothing about it other than that it had robots in it. Like Cage’s previous works, we were prepared for the fusion of film and game mechanics that didn’t comfortably fit into each category.

Playing through the perspective of the three distinct androids, we were blown away by the visuals and futuristic concepts that seemed scarily feasible. But we both found the most fascinating parts to be when Cage focused on the emotional issues facing the robots, rather than the grander political commentaries.

The character of Kara, in particular, gripped us for personal reasons.

Do Humans Dream of Deviant Androids? 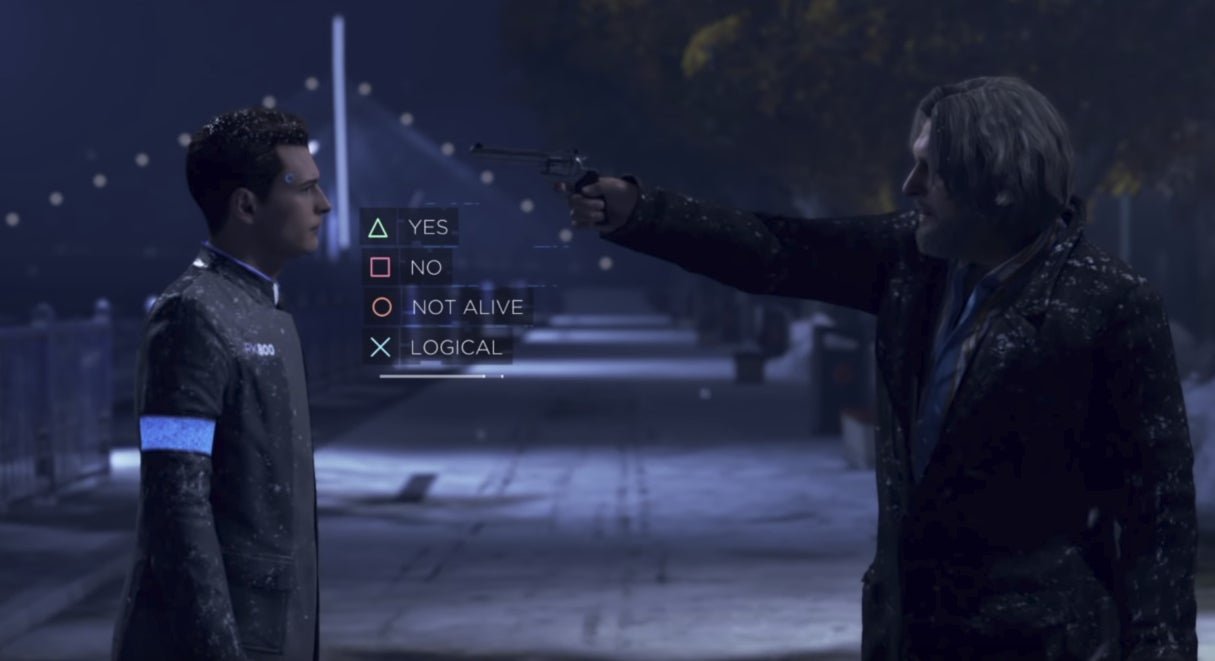 Most of the humans are real shitty in Detroit, to the point where robotic rebellion, termed “deviancy,” seems not only justified but necessary for survival. The people in the game are excessively cruel to their machines, subjecting them to all sorts of violence, verbal abuse, and downright sadism.

One of the androids you play as, Connor, acts as an officer tracking down deviants—a blade runner, basically. The most sympathetic human you meet is Connor’s partner, Hank. Unfortunately for you, if you don’t foster a close enough relationship with Hank, he’ll shoot you in chapters like “The Bridge.”

Even though death doesn’t have massive repercussions, since the CyberLife company will just rebuild Connor, it made me wonder what kind of world these androids live in, where the wrong answer can get them terminated. 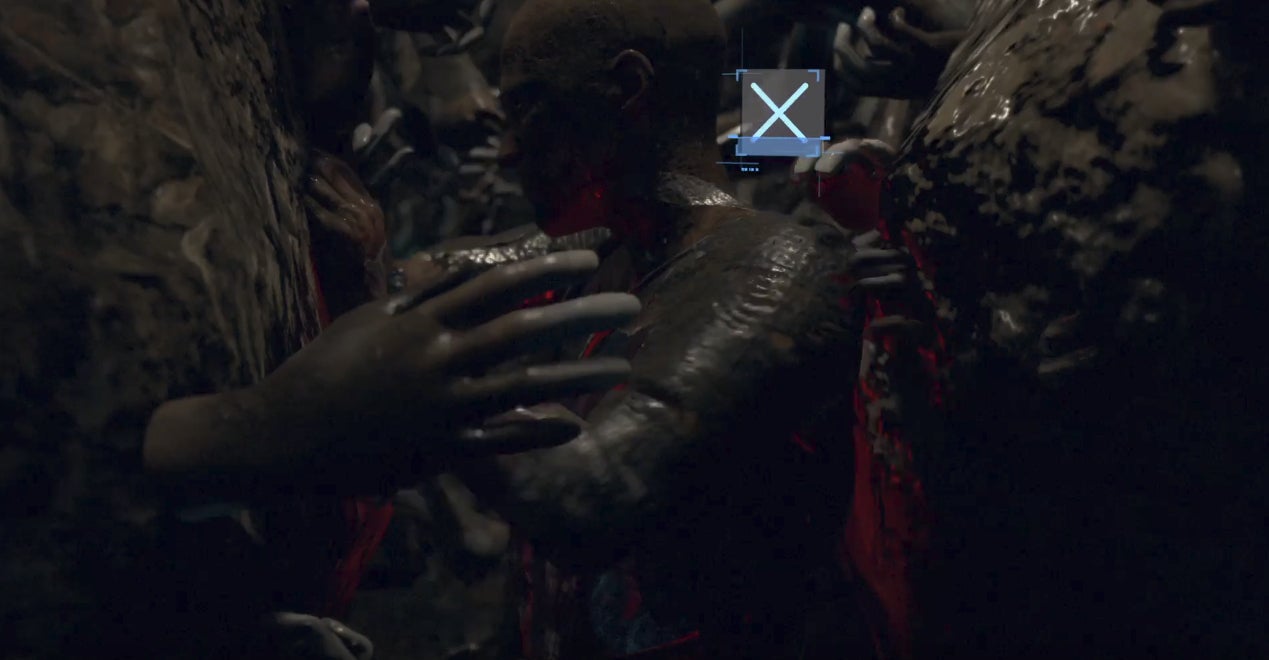 This feeling of injustice is amplified with the caretaker android, Markus, who gets destroyed by his rich owner’s son and discarded in an android junkyard. The sudden shift from affluent manor to android hell is one of the most visually gut-wrenching scenes I’ve played. Broken pieces of robot dross are scattered everywhere.

The sense of despair and horror is palpable, as Markus has to crawl without legs through the muddy trash field. His hearing devices are impaired, so everything is muted. He finds parts to try to fix himself and has to make his way through a tight corridor filled with android hands trying to grapple him, all vying for their lives.

His descent into death and back symbolises his emergence as an android messiah figure.

I imagined that Markus’ arc would be the most interesting, representing a more action-packed element of the narrative. But for both of us, we found the plight of the housekeeper android, Kara, the most compelling. She’s been purchased to take care of Todd and his daughter, Alice. 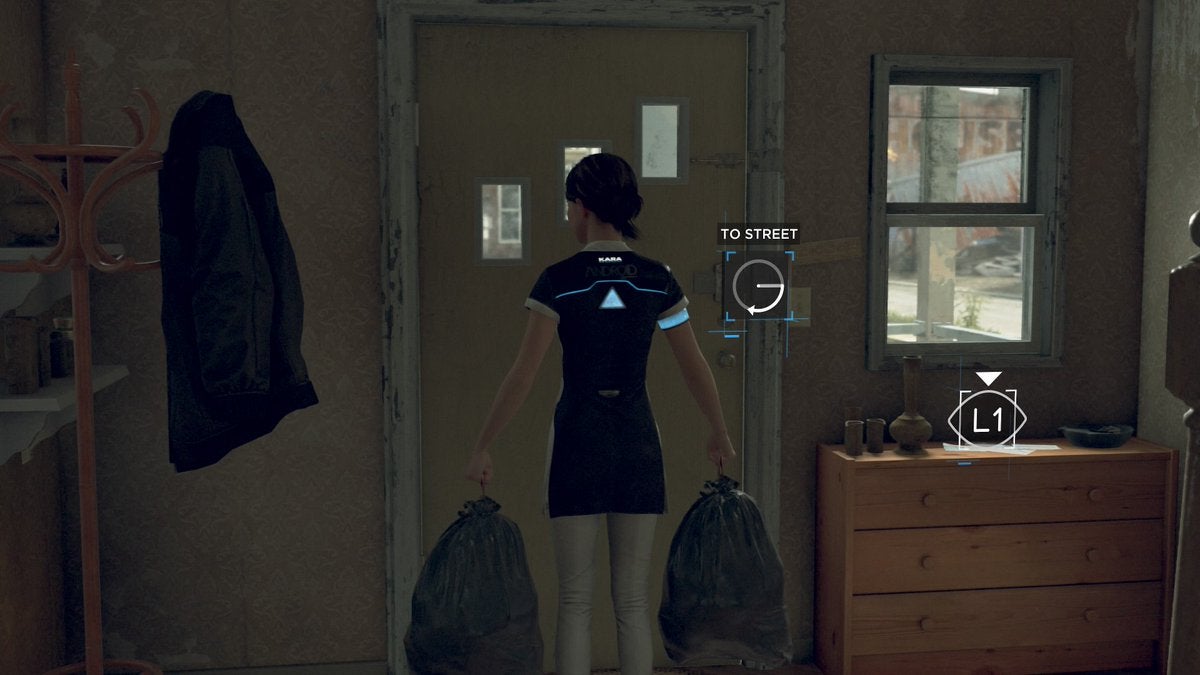 A little bit of context is important here. My wife Angela and I recently welcomed a baby into our lives. Every night, we had put her to sleep before starting up Detroit. Even as we played, we had the video monitor next to us.

We were both amused that in our real lives, we were washing dishes, taking out the trash, and taking care of baby, then repeating the same actions in the game in housekeeping mode with Kara, who had been purchased to take care of a man named Todd and his daughter Alice.

Events in the virtual household took a dark turn as we came to realise that Todd is mentally unstable, an abuser taking out his personal anguish violently on his daughter.

In chapter 6, when we realised he was going to hurt his daughter, we chose for Kara to step in and rescue her, killing Todd in her moment of deviancy. From then on, they had to go on the run. 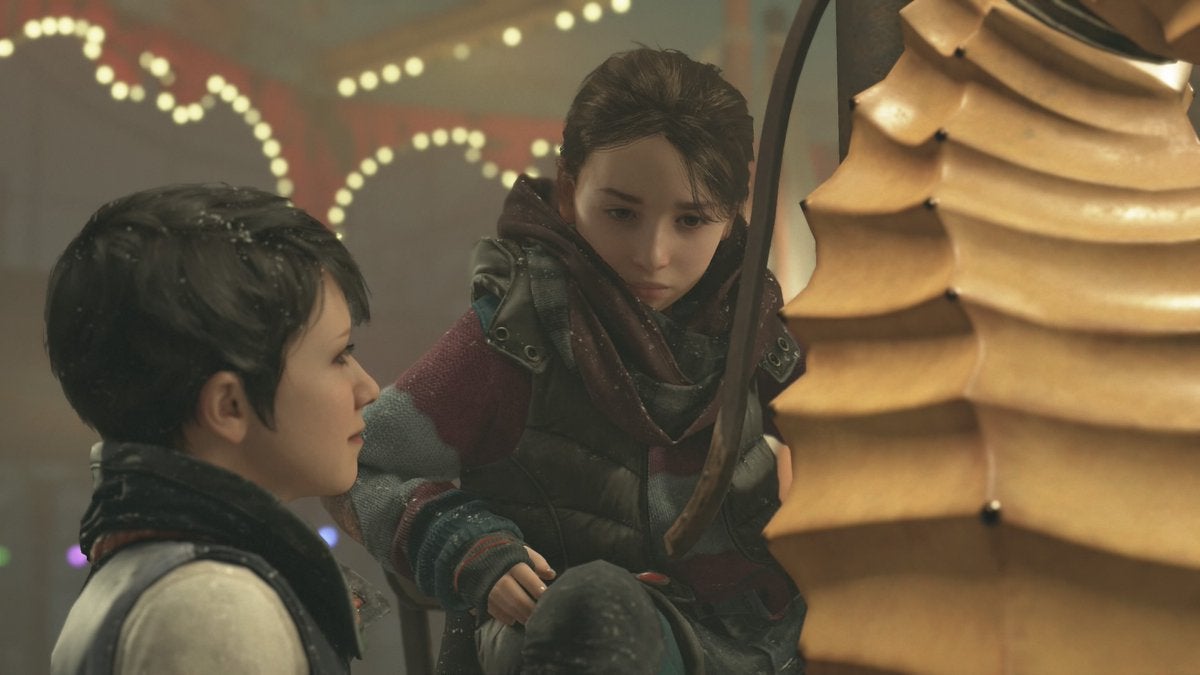 Unlike Markus and Connor, who have more agency in their choices, Kara’s path is filled with a lot of frustration and helplessness. She’s running from one place to another, doing her best to protect Alice. On the first night they escape, their biggest obstacle is to get out of the rain and find a place to sleep.

There are three paths they can take to do this, and each of the decisions is aggravating as there’s no clear-cut “right” answer.

1. Sleep in an abandoned car, which lowers your relationship standing with Alice since it’s so crappy.

2. Steal clothes from a laundromat, then rob a store either at gunpoint or while the cashier is distracted. Kara takes the money and can spend it on a motel room. This understandably disturbs Alice for its criminality.

3. Stay in an abandoned house which is inhabited by a deranged android, Ralph, who seems ready to snap at any moment and offers Kara and Alice a dead rat as breakfast.

Regardless of the decision you make, matters get horrifyingly worse at their next destination, which is to an illicit dealer in android parts named Zlatko. I was deeply troubled by the implications of the scene, finding them exploitative and downright disturbing—it’s a captivity scene where she is taunted and then subjected to a memory erasing device.

Angela’s focus was on protecting Alice no matter what. One of the best features of Detroit is that it allows players to redo any chapters in the flowchart at any of the major decision points and diagram all the possibilities a given chapter has. Angela had us redo whole chapters if we screwed up with Alice even a little.

We ended up redoing the Zlatko chapter 4 times. In the Midnight chapter, after I messed up one section when we put her to sleep upstairs, we redid it to make sure Alice felt emotionally comfortable. It was our parental instincts kicking in, and we were gratified we could relive certain moments to do them right. 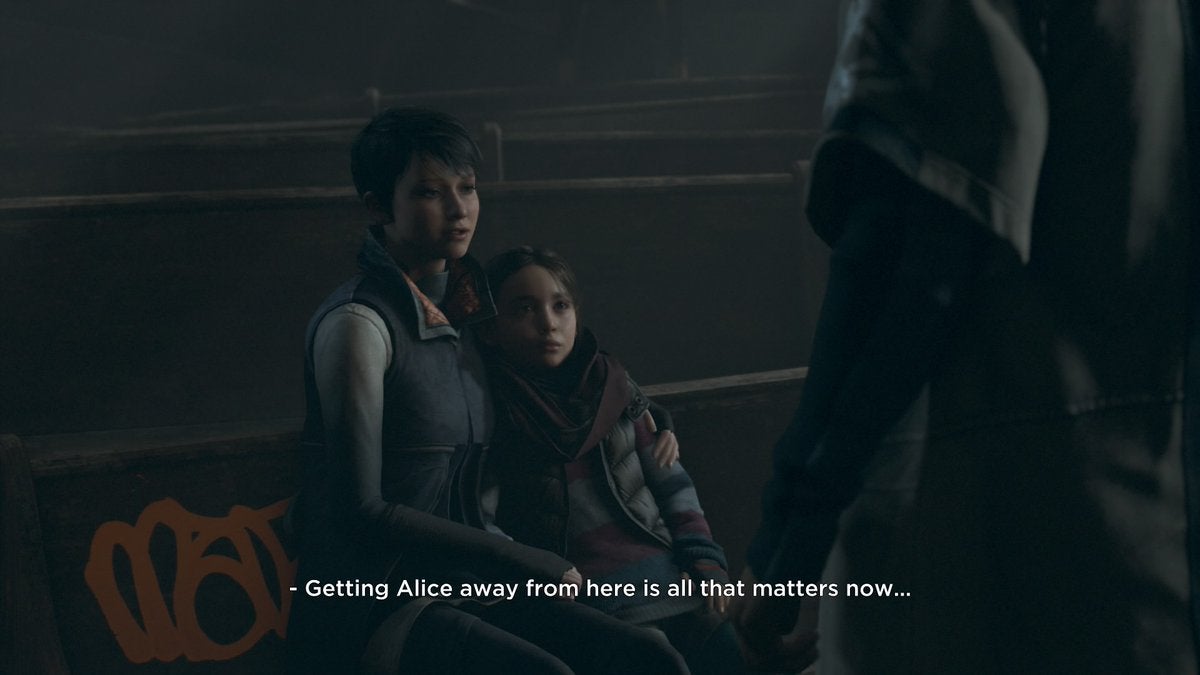 The abuse and escape scenes were really painful for me. It brought back memories of my own childhood, growing up in an abusive family. There were times when, due to how violent it got, I’d leave home to go stay with friends. The feeling of helplessness, that no one would help, came back to me in a disturbing flood as I played Kara’s scene.

Their helplessness felt like my own. I could relate to Kara and Alice’s dream of escaping to Canada. Now in the present, the fact that we had a baby of our own to protect gave these scenes even more gravity as it allowed us both to reflect on our past and our future. While it took time to redo the Alice scenes, I didn’t mind, if it meant getting them right.

Detroit was important to me for the way it portrayed abuse. I don’t mean just the physical kind, but all of its permutations as well. I saw the story as symbolic of how people become robots stuck in their own lives, repeating cycles of torture and pain, shutting down emotionally to the world so they can cope.

Throughout the game, there are mysterious allusions to a mythical figure worshipped by the androids called rA9. I had thought rA9 would eventually become an integral part of the story and a big reveal would somehow be connected to the robot revolution. But on my two playthroughs, rA9’s identity was never actually revealed.

After finishing the game, I realised, that was sort of the point. rA9 can be anything to anyone, whether religion, a hobby, even an addiction—some way to endure what feels unendurable. 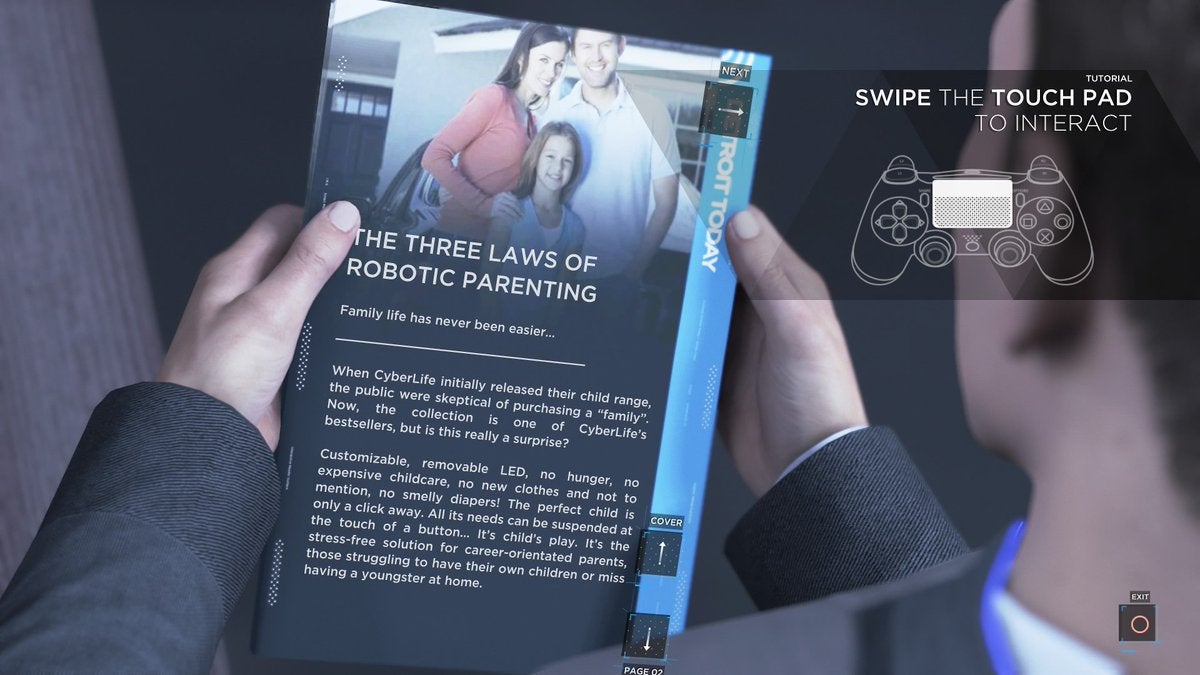 Throughout the game, digital magazines serve as an exploration of some of the ideas within the game, and also as a foreshadowing element for plot points. One of the most interesting was an article about the future of child-rearing being robotic children with “The Three Laws of Robotic Parenting.”

It promises “no hunger, no expensive childcare, no new clothes and not to mention, no smelly diapers!” While in real life, Angela and I have gotten used to changing diapers, sleep deprivation has been a real issue for both of us. I often feel like a walking zombie in my daily life.

This idea of robotic children sparked a lot of discussion between us of its merits and disadvantages.

I should have connected the dots, but I was slow on the uptake thanks to my zombie baby brain. We were both in for a big surprise when Kara is faced with a stunning realisation: the girl she’s been protecting, Alice, isn’t actually human, but a robot like herself.

Before that, there was something that felt sacred in Kara’s mission, almost as though protecting a human made her more human. But in that moment, faced with the reality that Alice is just one of many robots, we weren’t sure what the proper reaction should be. A fellow android, Luther, asks the poignant question: “Do you love her any less now that you know she’s one of us?”

Would a human mother still be capable of loving a robot daughter? I asked Angela what she would do if she found out our baby was a robot. It was another interesting conversation, to say the least. 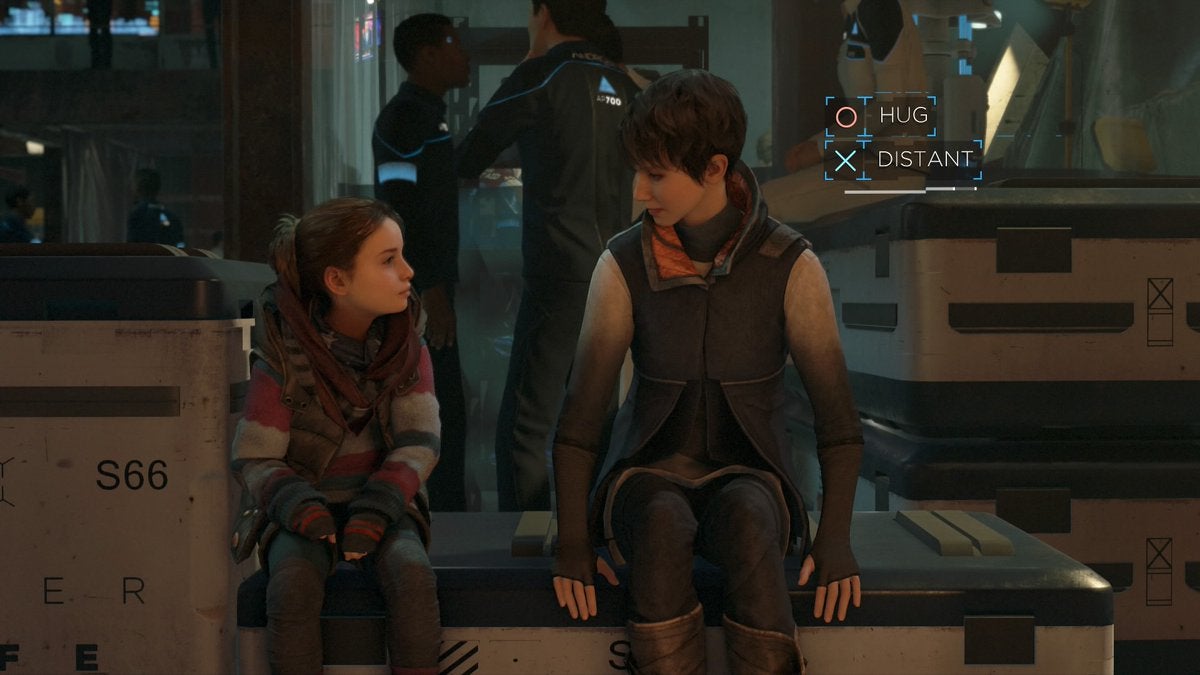 Kara’s ultimate reaction is up to the player. Do we respond lovingly with a hug, or remain distant, disillusioned by the truth? We define each android’s humanity, or lack thereof.

For both of us, the machines’ revolution and their fight for freedom were not as compelling as the moment where Kara had to make her choice about Alice. A robot that is capable of loving a robot girl to the point where she’d go against her programming and hurt a human, and even sacrifice herself, is sentient no matter how you spin it.

Because when Kara the robot is capable of more love and compassion than Todd the human, it makes you question the future of humanity and who should aspire to what.

Detroit’s “good ending,” if it can be called that, isn’t so much about “becoming human” as it is about surpassing them. You can opt for one of the more violent endings, waging war against the humans and getting your characters killed. In that case, the androids fulfil the bloody legacy of humanity perfectly.

The fact that the choice is yours is one of the most compelling parts about Detroit and the reason why, all this time after finishing, we still think about the themes behind it.