Lois Lowry Discusses The Giver’s Legacy, The Movie, And Why It Was Time For A Graphic Novel

The Giver may have come out over 25 years ago, but the story holds just as much weight now as it did back then. That could be why it’s finally been turned into a graphic novel. We chatted with author Lois Lowry about what works in P. Craig Russell’s adaptation — along with her thoughts on the 2014 movie, and what wisdom the Receiver of Memory would impart from the hellish nightmare we’re currently living through.

Kotaku: The Giver fans have been asking for a graphic novel adaptation for a long time now. How did the idea come about? Was it brought to your attention the other way around?

Lois Lowry: For a long time, I said no to a graphic novel of The Giver. And thinking back on it, I can’t recall exactly why I said no. But maybe just intuitively I felt it wasn’t time yet…I think my publisher went to [P. Craig Russell], and he put us on a waitlist. And so, by the time he got around to doing it, it was fairly recently.

In retrospect, the timing was right. At that point, I felt quite comfortable with it. And I was not part of the — how can I phrase this — I didn’t have any input into what he was doing. But I was very pleased with what came out of it.

Kotaku: The Giver is a very visual novel, and everyone sees it in their own way. What was it like looking at Russell’s artwork, and seeing how he interpreted your words and the world you created?

Lowry: Well, that’s a complicated answer to a fairly simple question. Before he did this graphic novel, a film was made of The Giver. I’ve always been aware that a novel has an advantage—I’m not speaking of a graphic novel now — but the original novel has the advantage of being able to be inside the head of the character.

And when you translate that to a visual medium, like a movie, you lose that advantage. The audience can no longer create their own scenes. They have to accept what the visual medium shows them.

[Russell] seems to be able to be inside the head of the boy in a way that the movie could not be. When I [read the graphic novel] for the first time, it felt very much like the book to me. There are no scenes that were jarring in the graphic novel that made me feel, “Oh I didn’t picture it that way,” with the possible exception of the houses in the community…But that’s very unimportant, I think, for the most part. Everything he’s portrayed visually is very much what I might have seen in my own mind, and what I think most readers did.

Kotaku: In the sequels to The Giver, you’ve confirmed that Jonas and Gabriel survived. But the graphic novel leaves the ending ambiguous, like the original story —

Lowry: — And that’s appropriate because this is a retelling of the same story that’s in the book. The ending is similarly ambiguous, as I had left the ending in the first book. I never really intended to write successive books, and it was only after a number of years that I finally did write some that used the same characters and made clear that they were still alive.

But I think he didn’t need to address that in this book because this book is the original one. It is The Giver. It is the one that left the reader wondering about that ending.

As I’ve watched — how can I describe it — contemporary political history evolve, I see how people can read things into The Giver that I wasn’t aware of putting there at the time.

Kotaku: The was at an all-time high, though you didn’t write the book as that kind of story [note: it was inspired by her father’s Alzheimer’s diagnosis].

Looking back at the film five years later, given when it came out and how it looked, how do you feel about that version of your story?

Lowry: There was much that I liked about the film. One of the things is a purely visual thing, but I thought it was so well done in the film, and that was the creation of the Giver’s room. I pictured a room filled with bookcases lined with bookcases, in my mind.

I’m leafing through the graphic novel to see what he shows there in terms of the Giver’s room. I think the graphic novel pretty much reproduces what I saw in my mind…The movie created this room with monumental walls of books. It was really spectacular. It was breathtaking to look at in person.

There were other things that I regretted, although I could understand why they did them. One was the fact that they made the characters older in the movie than they are in the book. The graphic novel portrays Jonas as a 12-year-old boy, and that’s how I always saw him. They had several reasons that I understood, though I was sorry about it, that they made them older, 17 or 18.

One was that if they hired 12-year-old actors, they would have to abide by child labour laws. And the actors would only be allowed to work a certain number of hours a day and it would have made the filming twice as long and the film much more expensive to do.

I did ask them, upon being told that the characters would be older, to please not turn it into a teenage romance. They told me they would not. Yep, they did a little bit, and there is a tentative kiss in the movie. It’s not overdone, so I could live with that as well. But another thing I was sorry about was the necessity that they seemed to feel for—I don’t want to say a car chase, because of course there were no cars—it was a vehicle chase. I guess that’s something that movie makers feel they have to put into films to satisfy an audience that expects it. 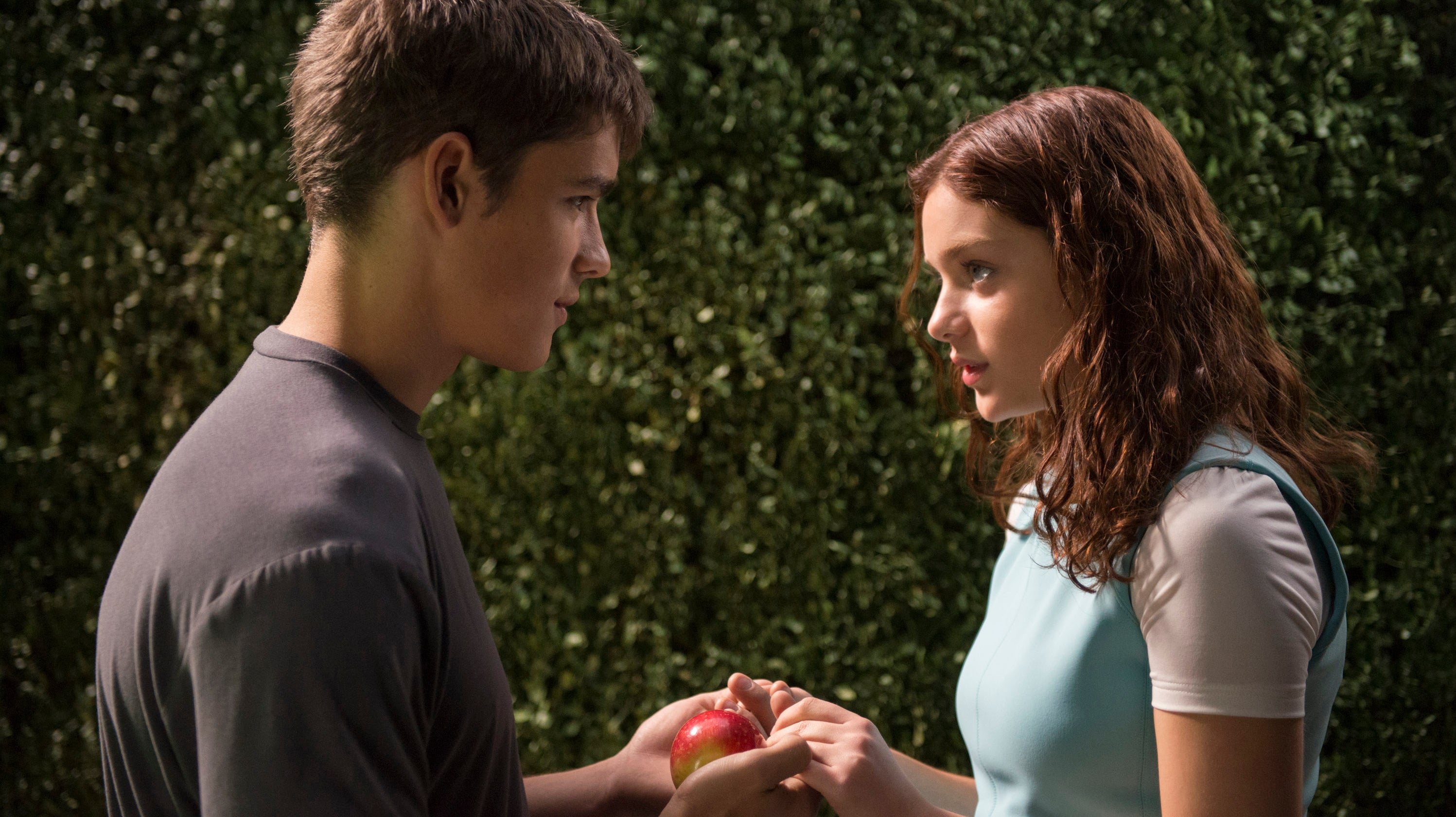 Kotaku: Was there anything notable that the movie removed that Russell added back into the graphic novel adaptation?

Lowry: I’m very pleased that Craig Russell included the boy bathing the old woman. I think the movie makers felt that was problematic to an audience that would presumably be a younger audience. I mentioned that to Jeff Bridges when they were doing the filming. He asked me if I wanted to play the role of one of the elders. I said no, and I jokingly said: “If you had left in the film the old lady in the bathtub, I could play her.” And he knew I was joking.

Nonetheless, it was much later, when he and I were together on [Charlie Rose’s PBS show] that he said, as if it were true: “Lois wanted to play the role of the lady in the bathtub!”

Craig did put that naked lady in that bathtub. And that’s a scene that has sometimes caused parents to object to the book. But it’s done in the [original] book tastefully and without any sexual implications, and I think Craig has done it that way as well. I think it’s a lovely scene.

Kotaku: Another thing they changed was they made Meryl Streep’s character more of a villainous figure, whereas the book doesn’t really have one.

Lowry: The Chief Elder is a very small role in the book. Maybe it’s because they had Meryl Streep, they made it into — not a larger role in terms of space on the screen, but a more complex role, a more ambiguous character. And to be honest I kind of like that. There’s a hint that there was some perhaps prior relationship between her and the Giver.

That all was kind of appealing to me, and in fact, I was kind of sorry I hadn’t hadn’t included something like that in the book. But maybe I felt that way because it was Meryl Streep.

Kotaku: When you originally wrote The Giver, it was about that personal experience involving your family. Since then, it’s taken on a larger life of its own. Is there anything about the novel that’s changed for you over the years?

Lowry: As I’ve watched—how can I describe it—contemporary political history evolve, I see how people can read things into The Giver that I wasn’t aware of putting there at the time. Actually, that’s much more true of one of the sequels to The Giver; sequel is the wrong word, but one of the companion books.

The third one in the quartet, called Messenger. It places Jonas and the baby [Gabriel] in the place that they’re now living, which is a very well-run and happy community composed almost entirely of refugees. People who have come from other places for various reasons. And then the town becomes corrupted by self-interest and greed — all those human qualities carried to an extreme.

They have a vote, hotly contested, and they vote to build a wall around their community. It’s bizarre how current that seems, how prescient that makes the book seems.

Kotaku: The Receiver of Memories’ role is to look at the memories of the past, to impart wisdom on people facing an unknown future. If the Receiver were looking at memories of what we’re going through right now, what do you think the wisdom imparted would be?

Lowry: You know, it’s too soon to say that because we don’t know how this is going to turn out. This very volatile times we’re in. Conceivably, he could look back and see that we had doomed ourselves, or maybe things are going to turn out OK.

I don’t want to speculate how that would or could or will or might happen. But one would hope that somebody in the future — looking back to acquire wisdom — one would hope they look back on something that turns out OK. I think it’s too soon to know whether that’s going to be true or not.