Mister Miracle and The Superheroic Power Of Persistence

The New Gods of Jack Kirby’s weird and wonderful cosmic Fourth World have all sorts of superpowers—strength, speed, intelligence.

You name it, they’ve got it. But Scott Free’s recent DC Comics’ miniseries concluded with a reminder that maybe the most incredible superpower of all is getting up and dusting yourself off regardless of what hits you.

While one of the very essences of superheroes as a power fantasy is that they can shrug off even the most astonishing attacks like they’re nothing, none of us can resist the allure of the very act of superhuman endurance that is a character refusing to stay down from a thumping that really leaves a mark. From Batman to Spider-Man, we revel in the triumph of characters that get the everloving crap knocked out of them, only for them to stand and get it knocked out all over again.

That moment of faltering vulnerability, when it makes it seem like all is lost and the villain has won, is what makes them so relatably human in the first place—and the ability to overcome the overwhelming odds of an ailing body and stamina to push through and get the job done is what makes them so boldly heroic.

If one comic run has been a testament to that idea recently, it’s Tom King, Mitch Gerads, and Clayton Cowles’ Mister Miracle.

It’s about love and war, families and parenthood, about trauma and anxiety. It’s also about some incredibly good T-shirts.

But at its very core, it is about the testament of Scott’s ability to persist, even as the wild worlds of New Genesis, Apokolips, and even Earth buckle all around him.

King is a writer that loves repetition. From thematic mirroring to repeated imagery and symbols and his use of the nine-panel grid the comics of yesteryear were built on, it is an idea that is, well, repeated throughout his comics work. His dialogue, whether it’s in The Vision, or Batman, or Sheriff of Babylon, is built on particular phrases that weave themselves in and out of dialogue again and again, and Mister Miracle is no exception.

There are several examples of this across the series—perhaps most famously “Darkseid Is,” a statement that itself is the linguistic embodiment of Darkseid’s own indefatigable ability to endure and one of the series most stark pieces of imagery, invading page after page of issues as white type across a pitch-black background.

But the one that is perhaps truest of all to the core theme of persistence in Mister Miracle is the following exchange:

It’s an exchange we’re first introduced to in the early pages of Mister Miracle #1, when Scott’s adoptive brother Orion—son of Darkseid, traded to take Scott’s place as the son of Highfather as part of a peace treaty between New Genesis and Apokolips when they were children—pays a visit after a suicide attempt by Scott in the opening pages of the series.

When we first read it, it is meant to be indicative of the harsh upbringing Orion left behind as the child of Darkseid, the upbringing Scott inherited when he was brought to Apokolips and raised in the nightmarish Terror Orphanages of Granny Goodness.

It’s brutal and unrelenting, a lesson as much as it is a militaristic demand: Scott is ordered. Scott complies. Scott gets decked clean off of his feet. It begins again, and continues until the lesson is learned—on Apokolips, you only get to stop when Darkseid tells you to stop. 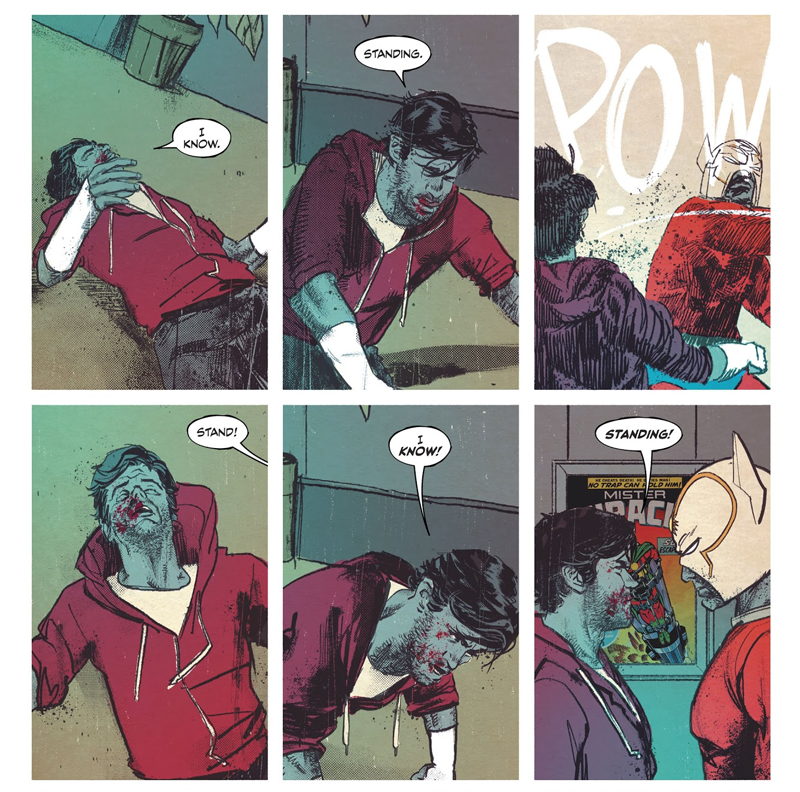 Bear in mind that this is all happening so recently after Scott got out of hospital he’s still wearing bandages over where he slit his wrists. That’ll give you an idea of the kind of person Orion is. (Image: Mitch Gerads and Clayton Cowles, Marvel Comics)

Its stark, uncompromising violence—punctuated by the splatters of ink Gerads’ raw art dots around Scott’s frame, cutting a figure that is as frayed around the edges as Scott’s own psyche—becomes symbolic of the mental, spiritual, and physical gamut Scott and Barda go through over the course of Mister Miracle.

From the outbreak of a new generation of war between their homeworlds, to the stresses of becoming parents for the first time, to Scott’s own mental breakdown as he tries to deal with the million incomprehensible things happening to him at once. And that’s all while picking himself back up after a suicide attempt, it’s just non-stop terrible stuff.

If Scott Free is an escape artist, Mister Miracle is one long attempt to constantly escape the reams and reams of almost comical amounts of bullshit he has to face. It never stops. The minute one thing abates for a while, a new problem explodes violently in his face.

And yet, Scott keeps running. One of the most interesting parallels of Mister Miracle as a book is its heady clash of the cosmic absurdity of Jack Kirby’s world of space gods with the crushing realness of Scott and Barda’s life on Earth—and the fact that, weirdly enough, it’s the hits that come to the latter that are way harder to get back up from.

All the stuff with the war is exaggeratedly brutal and violent. The couple is drafted first as frontline generals before eventually, through a mix of courtly intrigue and losses through the grim attrition of the conflict, becoming defacto leaders for New Genesis at large.

But in a way, it’s almost easy for them. The real challenge is the human stuff.

Escaping maximum security incarceration on New Genesis after being sentenced to death? No sweat. Enduring rush hour LA traffic? Intolerable without the calming moans of the damned playing over the Mother Box. Fighting endless armies of Parademons on battlefield after battlefield? Tiring sure, but manageable for a New God. 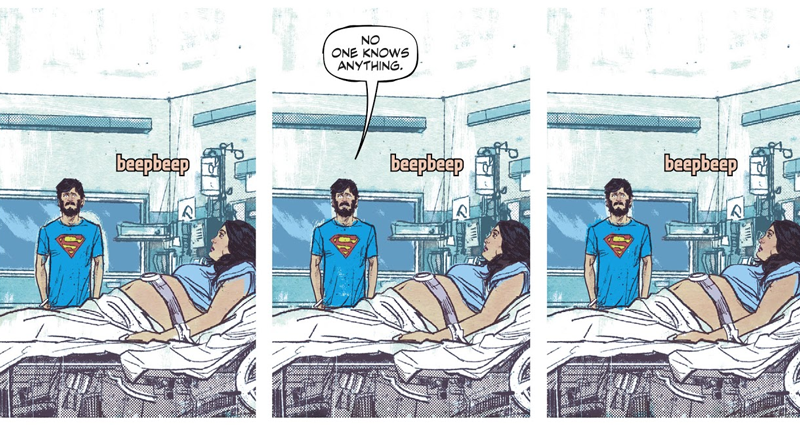 King’s love of repetition comes to the fore with challenge after challenge for Scott to face, until it all feels like it merges into one endless treadmill that he can never fall off.

It’s not a literal repetition of the lesson with Orion from the start of the series, but a metaphysical one, with Scott Free telling the world around him that he’s standing, ready for the next hit to send him reeling back down to the floor. The master escape artist may not be able to escape the treadmill of his life, but you can be damn well sure he’ll endure it.

All this coalesces in what is ultimately the most triumphant moment of the entire series in Mister Miracle #11, when King’s fascination with repetition finally pays off with a direct callback to Orion’s command to Scott.

After hatching an audacious plan to kill Darkseid—to prevent him taking little Jacob as part of a treaty to end the current war, just as Scott was taken in the war of long ago—and nearly dying in the process, a battered Scott is called out to by an equally battered Barda to stand. At first, he falters. One excruciating panel of the nine-block-grid after the other passes, with Gerads artfully rendering each of them loaded with the aching heft Scott’s tangible exhaustion.

She repeats the command, and a few more palpable panels pass. And it’s only then, punctuated by the cries of his infant son, that Scott complies and drags himself up to his knees. 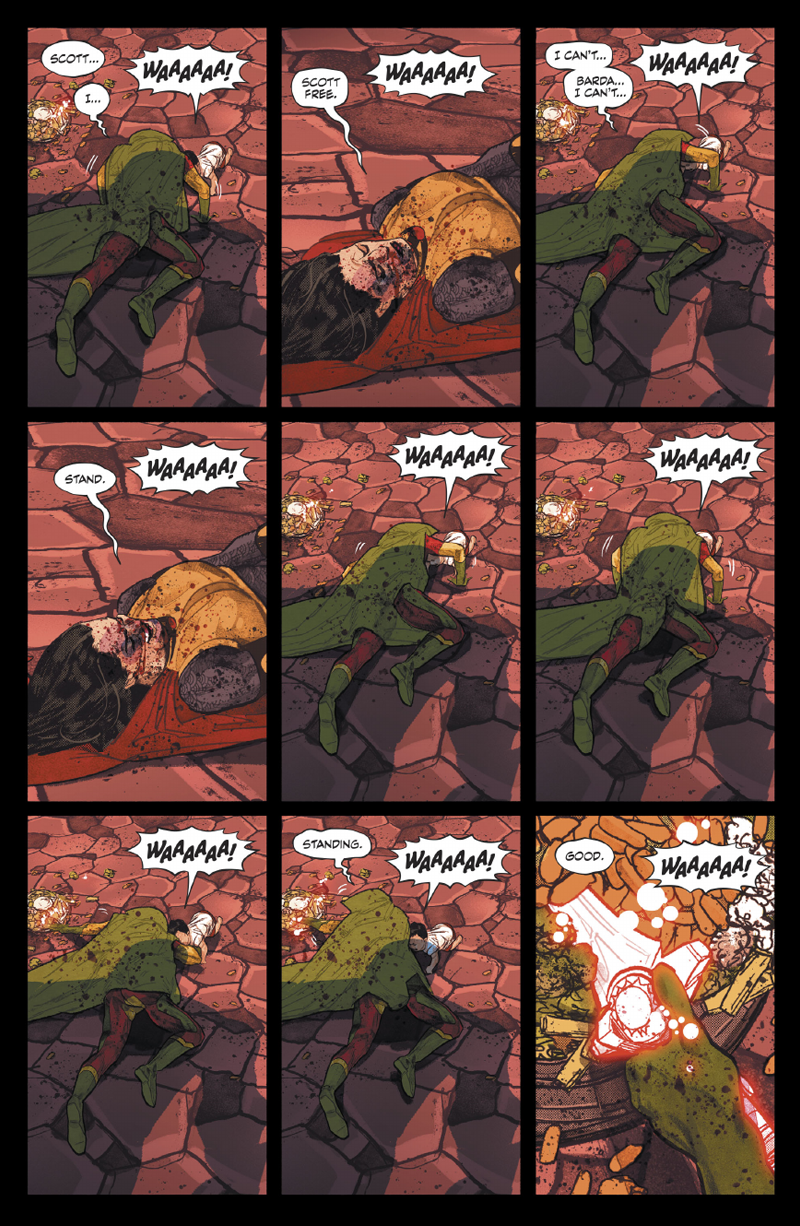 It all comes back to getting back on your feet. (Image: Mitch Gerads and Clayton Cowles, DC Comics)

If the entirety of Mister Miracle up until this moment was about the struggle of persisting in simply the pure act of living a normal life, it’s in Mister Miracle #11 that persistence itself becomes unabashedly superheroic—a culmination of all the moments of endurance before it for one cathartic, powerful release.

Barda and Scott get their big win, killing Darkseid and ending the war, but most importantly, save their family from being ripped apart by the machinations of New Genesis and Apokolips. That victory is symbolized by reframing the act of standing we saw in the very first issue—not in adherence to an order, but as a simple moment of perseverance, of defiance.

Yet, there’s a whole issue Mister Miracle beyond this moment, and it’s another issue of repetitions—as one cycle comes to an end, another takes its place. There’s a new season of war, in spite of everything that came before it in the last one. There’s another child on the way for Scott and Barda, with all the trials and tribulations and hardships that that brings.

And through it all, Scott is haunted and goaded by the ghosts of what came before, poking and prodding in his psyche. Who could possibly want to continue in this endless cycle? Is it heaven, or is it hell? Is it neither? Why hasn’t Scott given up yet, or has he given up already?

And yet, Scott persists.

He lives his lives on Earth and on New Genesis, ekes out some form of happiness, as the hits that knock him off his feet start to come a little less frequently. His power to endure is ascendant—and brings with it a little peace within the heart of the storm, alongside the woman he loves and the family they’ve made together. 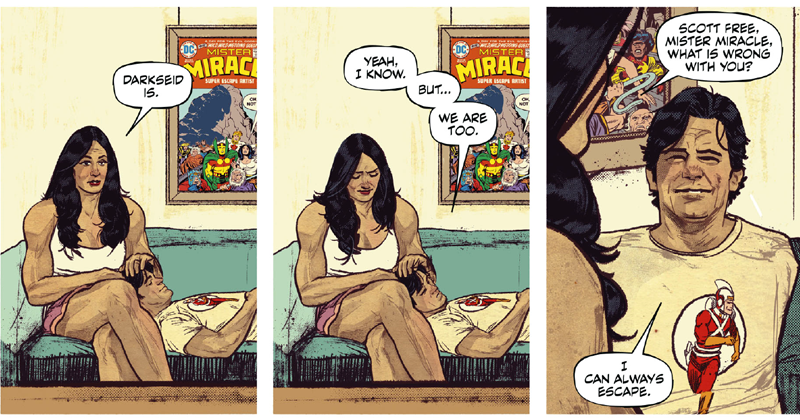