As we wait for Game of Thrones to come to its that never was—one that would’ve given us a radically altered version of the series as we know it.

Details from some version of the alleged script for the original 2009 pilot of Game of Thrones have been circulating around the internet for the best part of a decade at this point. This version, it seems, was nowhere near as beloved, to put it diplomatically, as the show we got. But now some intriguing new details have emerged.

The Huffington Post recently revealed that a copy of the fabled “disastrous” pilot production script has actually been hiding in plain sight for years—or more specifically, at the Cushing Memorial Library at Texas A&M, where George R.R. Martin has long been a patron and also serves as his official repository of archived materials.

The script found at the Cushing Memorial Library has a few major differences from the script that’s been seen online — and given that it is the one that Martin himself filed to his archive of work, it’s likely from a stage of development on the pilot that is much closer to what was actually shot (and then eventually lambasted so hard that 90 per cent of it was re-shot for what we eventually saw and fell in love with) in comparison. 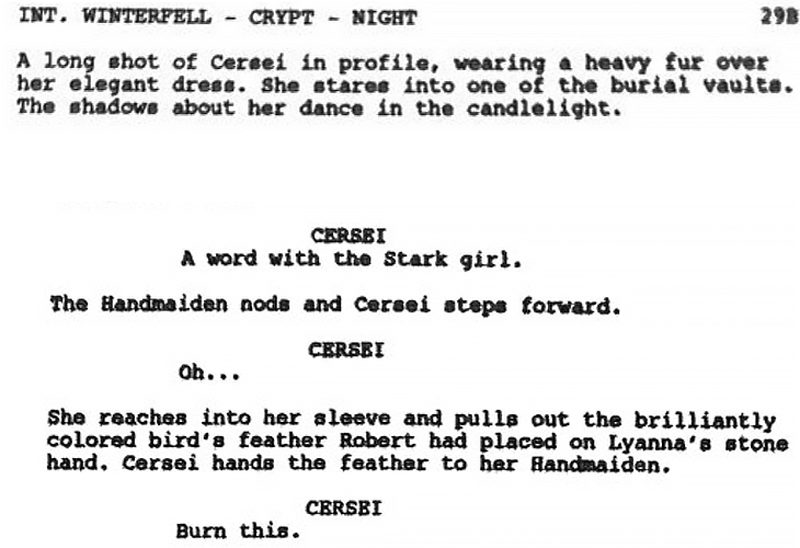 There’s more moments from the novels in there—like an extended feasting sequence where Jon Snow gets a bit too tipsy for his own good, while Ned and Jamie trade barbs about the latter’s execution of the Mad King — that come at the expense of getting to better know the Starks like we do in the final version of the pilot. There’s a whole added moment, for example, where Cersei sneaks down to the Stark family crypt at night to cruelly swipe the feather Robert laid at the statue of Lyanna Stark, which would’ve undercut the moment Sansa discovers that feather years later when she finally returned to Winterfell.

Perhaps most intriguingly (and controversially) of all, two major alterations happen to the sex scenes between both Daenerys and Khal Drogo, and Cersei and Jamie, in the pilot. In the broadcast version of the episode, Daenerys and Drogo’s first night as a married couple culminates in Dany being raped by her new husband, while Cersei and Jamie’s tryst in the tower is portrayed as consensual up until the moment Cersei realises the pair are being watched by Bran Stark (earning him a push out the window). In the Texas A&M script however, the application of consent is reversed: Drogo asks Dany for consent, and only has sex with her after she offers it.

Meanwhile, Jamie and Cersei’s sex scene is depicted as much rougher and more violent—Jamie pulls at Cersei’s hair and forces her down while she asks him to stop repeatedly, before eventually noting that she eventually “does not push him away” as the scene continues. Which, err…changes a lot about the way Jamie and Cersei’s dynamic was eventually portrayed in the final show, in a not great way!

There are definitely some questionable moments revealed in this version of the script but beyond them, there’s nothing quite revealed by The Huffington Post’s analysis (head on over there to read about a few more changes) that necessarily suggests the absolute disaster the pilot was meant to be for its eventual extensive re-working.

A lot of it is down to more basic issues of not spending enough time with the characters we do need to get know — and in the case of characters like Catelyn Stark, who was played by Jennifer Ehle before she was recast in the reshoot process with Michelle Fairley, being given far more likable personalities in line with their journey in the books—in favour of esoteric fleshing out of the wider world of Westeros that don’t really add to the plot.

But we don’t really get a full picture of what the script was like, or how it actually translated to the screen, so who knows—maybe it reads a little better than it was ultimately presented, something that we’ll likely never actually get to witness, given Benioff and Weiss’ profound distaste for the initial pilot. For now, this is likely the best picture of what could’ve been that we’ll ever get.