The Division 2’s President Has A Different Concern About The U.S.-Mexico Border

The creators of The Division 2 have been clear that their “goal isn’t to make a political statement,” but the game’s new private beta is surely making at least a political joke, or maybe it’s a political wink? When your character walks into the empty, insurgency-wracked Oval Office, they find on the president’s desk an audio recording labelled “Border Control: POTUS discusses border policies with the president of Mexico.”

Except … this audio log is not exactly about what you are likely thinking about these days when you hear the words “president,” “Mexico” and “border” close together.

In the real world, the American president wants to build a wall between the U.S. and Mexico to keep a lot of people south of the border out of the U.S. In case you haven’t heard, he’s really, really into this idea, even if the drubbing his party took in the midterm elections last year suggests that the country is not.

In the game world of The Division, the United States has been hit with a biological weapons attack that first ravaged New York City but has also turned D.C. and many other cities into lawless hellholes. It’s with that context that the audio log reveals that The Division 2’s president of the United States got on the phone with Mexico’s president to complain that the latter wants to shut down border crossings in El Paso to keep infected and/or desperate Americans out.

“I know you’ve got a lot of people headed south from there right now that you can’t afford to take care of. Believe me, we don’t want to outsource our problems to you.”

It makes sense that border crossings would be an issue in a game about a U.S. overcome with disease, but how cheeky of them, right? Of all the topics there could be an audio log about on the president’s desk. Hmm. 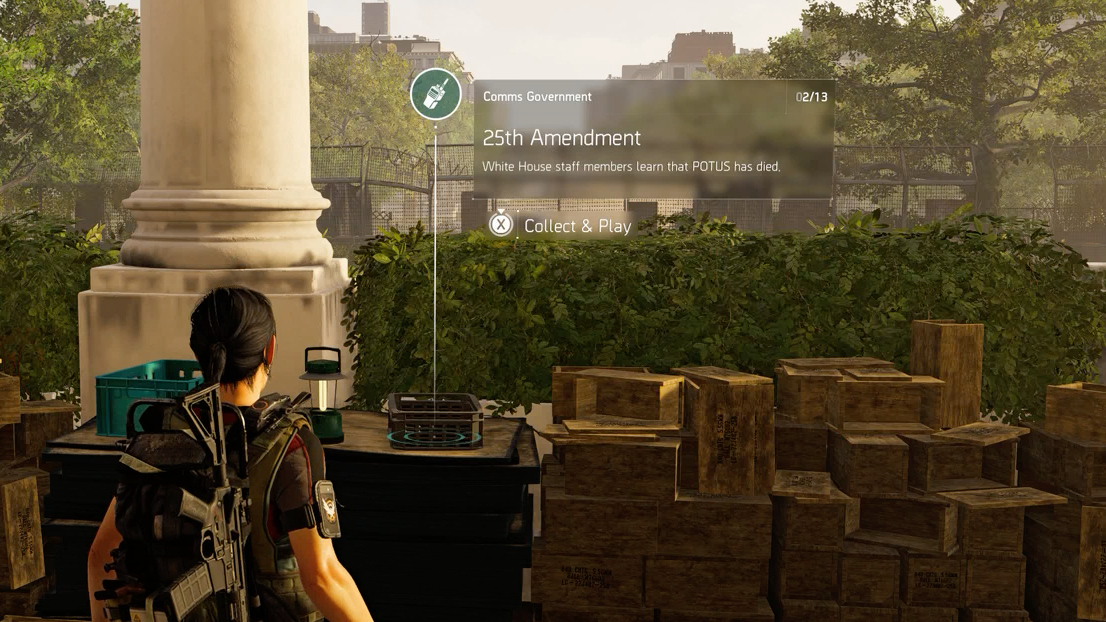 Elsewhere in the White House, there’s an audio log called “25th Amendment: White House staff members learn that POTUS has died.” This is another audio log that makes perfect sense in the context of The Division 2’s story.

In the audio file we hear that President Waller has died, and that “Mendez” will become the new president. It’s very serious and fitting for a game that’s got the Tom Clancy brand, but there’s also the great way it’s set up, which is … maybe a political joke? Come on, it’s kind of funny:

Unnamed person 1: Have you heard?

Person 2: No. What’s the latest? Has he decided Russia’s responsible after all?

Then it goes on to reveal he’s dead. Obviously they are talking about whether he thought Russia was responsible for the viral outbreak. So be it, but let’s hear it for a president with “Wall” in his name who is sceptical about Russia’s responsibility for some heinous act.

From the tiny bit I’ve played of The Division 2, I don’t think the developers are trying to make a point about Donald Trump, but I do think there’s a chance they’re having some fun here. (As the Ubisoft game Far Cry 5 did with its mission involving the fabled Donald Trump pee tape.) Whether you think that kind of fun works or is a poor stand-in for actually saying something about politics now is the players’ and critics’ call.

Ultimately a Tom Clancy-branded game’s politics involve a broader world view about the potency of the military and the delineation between good guys and bad guys.

The Division 2 may well have other, deeper messages, but they aren’t apparent from the first half hour of the beta. We’ll have more impressions of how the new game actually plays after we’ve gotten a few more hours into the beta.