The Rise Of The Video Game Selfie

Photo modes have been around for some time now, appearing in various video games. From Far Cry New Dawn to Spider-Man to Assassin’s Creed Origins, it seems more and more video games have been giving players the ability to become virtual photographers.

Using these tools, some players have created gorgeous pictures. While photo modes have become all the rage, the selfie has also been popping up in more games lately too.

For some folks, selfies are stupid. The knee-jerk reaction for many is to roll their eyes or laugh at people who take selfies. This anti-selfie attitude permeates throughout much of the internet and by extension, the gaming community.

I too once hated the selfie. I saw it as something dumb or immature. A selfish action. I would think “Hey, just enjoy the world. Stop taking photos of yourself.” In recent years, I’ve had a change of heart. Are there selfish arseholes taking selfies all the time? Probably. But many folks take selfies as a way to feel more confident or express themselves. Honestly, selfies don’t hurt anyone and I just moved on. There are better and more worthwhile things to hate in the world.

Freed from my hatred of selfies, I’m happy to see more games adding selfie features. I can’t figure out the very first game to include selfies, but one of the first video game selfies I took was in Grand Theft Auto V. I saw an NPC dressed as a zombie and I snapped a quick selfie with the person. 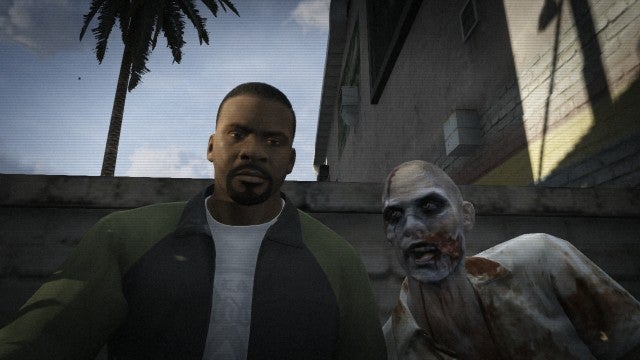 Since then I always get a small kick out of being able to flip the camera around in a video game to take a selfie. I took selfies in Watch Dogs 2, Dead Rising 4, and Red Dead Redemption 2.

It is an interesting feeling to turn a camera around and closely see your character’s face. In games like Watch Dogs 2, you spend so much time looking at your character from behind or controlling them while they are inside a car. Getting a nice, up close and personal look at your video game avatar is weirdly intimate.

It also makes these characters feel more human. It seems like everybody today is taking selfies, even RDR2‘s Arthur Morgan.

Video game characters like D. Va and Cassie Cage are also fans of selfies. In fact, my favourite fatality in all of Mortal Kombat X involves Cassie Cage brutally killing her opponent, then snapping a quick selfie of them while their jaw dangles from their skull. This is easily the most brutal selfie I’ve seen in a video game.

Digital selfies have even popped up in video games that were created before selfies were a thing. There is a popular Doom mod that adds the ability for players to stop killing demons and start taking selfies. Sure, it’s a bit silly, but so is the idea of a lone marine killing hundreds of demons while stationed on Mars.

Selfies aren’t going anywhere. Maybe you hate them, maybe you love them. Regardless, selfies have become a popular way for folks to express themselves while snapping a photo. Video games should represent the culture and society they were created in. So it makes sense that video game selfies are becoming more and more common. Video games should change and evolve overtime. This is a good thing.

I say, bring on more silly selfie modes. The world could use a bit more fun.