Tom King Knows You Read His Comics On The Can

We’re in a golden age of superheroic adaptations, on film and TV alike — so at this point, we know that some sacrifices have to be made in structure and time to make a story from one medium work in another. But for Mister Miracle’s Tom King, the one biggest change is a matter of time itself.

The question about what has to change in the process of turning a comic into a movie was posed to both King and artist Mitch Gerads in conversation with NPR’s Glen Weldon in Barnes & Noble’s Union Square outlet last Thursday, to celebrate the trade paperback release of their stunning Fourth World saga. The duo discussed everything from how the series first began to its comments on fatherhood and depression, but at one point the topic came up of just how a film adaptation of the series could possibly ever work.

Mister Miracle is a work with both very deliberate pace and an equally deliberate structure — its use of the classic nine-panel grid isn’t just a throwback to comics of the age Jack Kirby’s New Gods were first born in, but becomes a symbolic commentary, a textual and visual prison that escape artist protagonist Scott Free must attempt to break out of. But with that comes a very specific pacing that guides the reader, but not so much in the way a director can control pacing in a movie—and for King and Gerads, that’s what makes comic books such a unique medium in comparison.

Tom King: What’s the difference between a comic and a movie? The thing about a comic is — in a movie, you control time. We don’t control time. We just try to control time. I envy a director who can do that, speed up a scene. He knows what’s going into your brain—I just know you’re on a toilet and you have to get off in like 20 minutes, right? So I don’t have that interaction with you. But I try. And that effort between what I think you’re going to do and what you do is sort of where the medium comes in. I don’t know exactly how you’re going to read the page, but I can try to predict it. And you don’t know exactly, but you can see my effort. And that makes it a unique genre to me, unlike movies or even novels, where one word follows the other. I don’t think movies succeed entirely when they just copy the ground material. 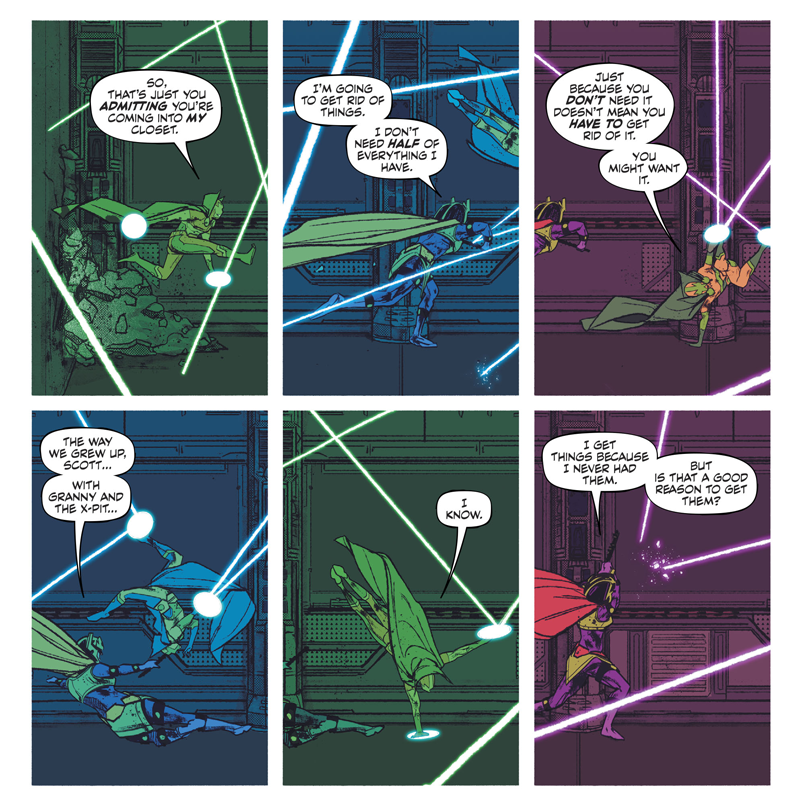 Glen Weldon: Right. Because [in Mister Miracle #6] where they go through a series of death traps on New Genesis, and it does something fascinating to the tension of the scenes because we see them escape death very narrowly — and they’re talking about remodeling the condo throughout the entire thing. So, in a weird way — especially to people new to comics moving from word balloon to word balloon — we are not necessarily processing the art the same way until you learn to read comics in that way. That just wouldn’t work in a movie. It could be done, but it wouldn’t have the same effect on the tension, the same implicit reaction.

Mitch Gerads: Yeah, that’s a really good example of things you can do in comics versus another medium. I remember getting that script and just reading it through a couple times—because I get those scripts very early, which is awesome. Because I get to live with it for a while. And I remember reading that and going, “All the tension is happening in this conversation.” Along with all this stuff they’re doing otherwise. And if I keep changing the “camera,” it removes tension from something else. So, I’m going to do it like a side-scrolling video game. Because then you’re just wrapped up in two things simultaneously. You’re not thinking about changing the angles, you’re forced to look at things in a certain way. So yeah — we just played it like a side-scrolling video game.

Mister Miracle as a series might not be making its way into a film adaptation any time soon — but Scott Free and Big Barda themselves might be the stars of Ava DuVernay’s in-the-works New Gods film. It’ll be interesting, after seeing the two in a comic series so wrapped up in its own delicate sense of structure, just how differently she could end up framing their escapades on the big screen.