I look at my watch. It’s 9:48pm. I’ll do one more Trials Rising track, I think. After that, since I’m only two levels away from the next stadium challenge, I do a few more. The stadium challenge turns out to be a tough bastard that makes me want to bite my controller in half, but I finally conquer it on about the thirtieth attempt. I look at my watch again. It’s past midnight.

Trials is the perfect video game: deceptively simple yet hard to master, totally absorbing, fist-eatingly challenging and yet always just, just conquerable. You haul a nimble little bike around increasingly outlandish, fiendish physics-based obstacle courses, trying first to get through them without crashing and then to best your own record times and other players’.

At the beginning it has you flying off giant ramps and zooming downhill as your rider screams in glee. Later you’re stuttering through increasingly sadistic tracks with minute adjustments to the throttle and analogue stick that make the difference between toppling backwards of a ramp and bunny-hopping triumphantly off the end of it. It swallows time like a hungry fourth-dimensional hippo. It makes you stay up so late that “fourth-dimensional hippo” seems like a totally reasonable simile.

So why dress this perfect game up in unnecessary frippery? Trials Rising garnishes a map with fun and beautiful racing challenges, then impedes your flow between them with endless progress screens and loot unlocks. Experience gates close off new challenges, leaderboards are needlessly complex, every track has contract challenges for various sponsors that overlay the simple bronze-silver-gold-platinum system that grades your skills, and every hour or so you have to sit and watch the same reveal animation 20 times when you remember to open the loot boxes you’ve earned.

These contain a neverending cascade of shirts, shoes, helmets, bike parts, victory animations and stickers with which to customise your rider. Frequently, it doles out doubles or triples that must then be individually sold via the inventory page for loose in-game change.

Who actually wants any of this?, I wondered every time I opened a box with a denim vest in it, wishing I was racing instead. Presumably a significant minority, or these loot systems wouldn’t have become so ubiquitous, but certainly not me — especially as there aren’t all that many cosmetic items and they are all the epitome of dreadful taste (sorry, RedLynx — no T, no shade). I mean, look at my appalling getup:

Does any of this ruin the game? Not at all; it’s cosmetic and ignorable. When you’re on the bike, Trials Rising is perfection, an escalating, exhilarating test of skill and self-mastery. But it does rather make me miss the simplicity of Trials HD, a game that stole months of my life when I was at university, determined to stay ahead of my friends on the global leaderboards.

Despite years of dormant Trials experience (I bailed early on 2014’s kind of messy Trials Fusion, so it’s been a long time since I wrestled a bike around an eye-wateringly difficult obstacle course), I gained much from Rising’s Trials University tutorials, which explain the physics behind advanced techniques like bunny-hops and uphill landings, which used to be instinctual for me. These tutorials unlock gradually, to avoid overburdening you whilst you’re still getting your motocross legs.

The first few hours of Trials Rising fly past in a blur of gold medals and sick jumps, at least until you realise that huge air is the mark of an inexperienced or undisciplined Trials rider rather than a skilled one. Virtual motocross is an improbable art, requiring patience and precision. Even before the transition to Medium tracks I was making liberal use of checkpoint restarts. 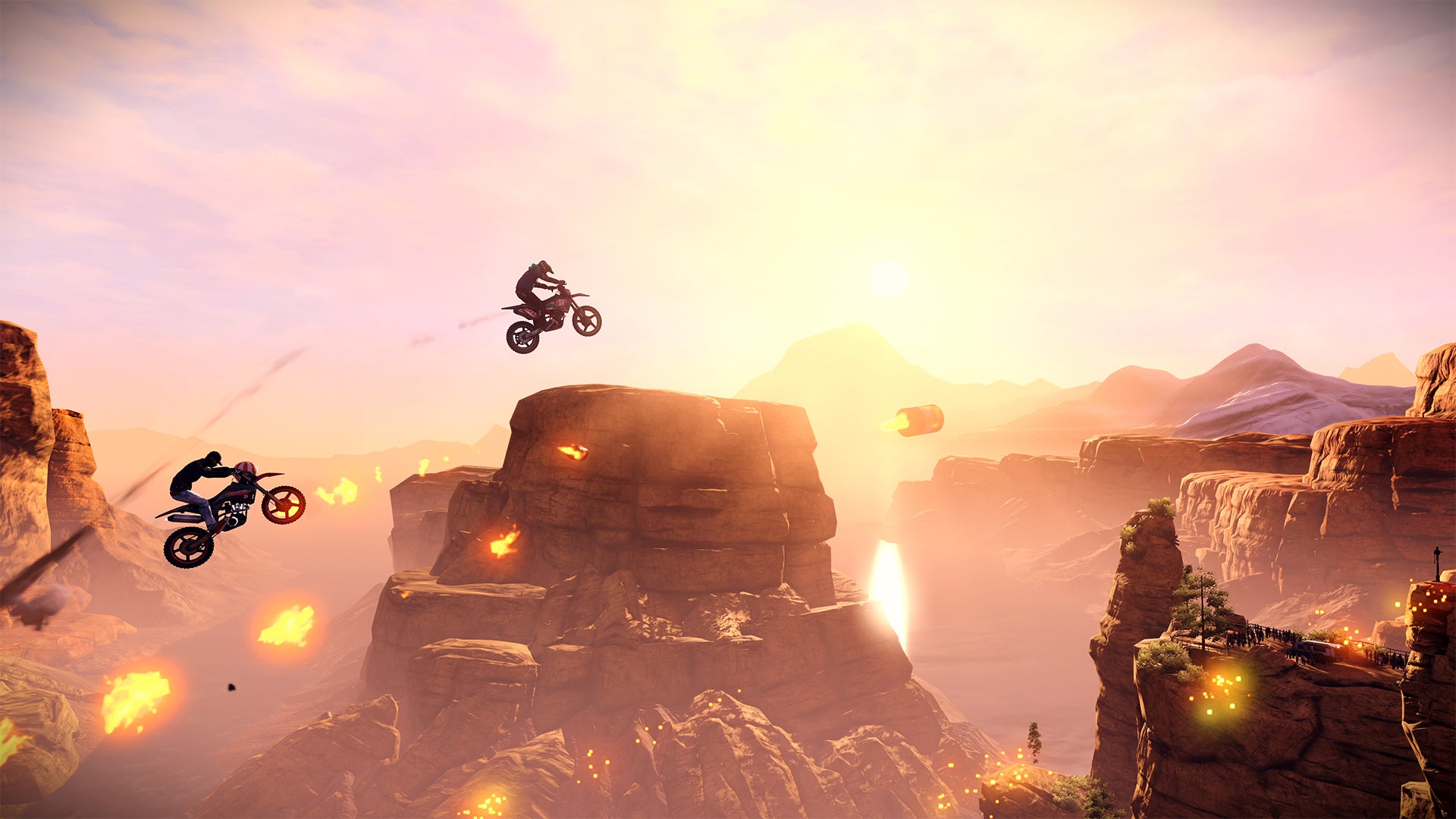 Stick the landing! STICK THE LANDING!

The perfect bikes, the amazing courses, the well-pitched difficulty

About 12 hours working through the single-player up until the Hard tracks started making me want to cry, and had a fun evening of multiplayer. I’ll definitely be playing more.

One of the things that makes Trials so frictionless and compelling is the ease with which you can retry when you land on your neck after a front-flip or fly into an exploding barrel. Courses are generally checkpointed after every demanding section, which feel like individual physics puzzles in the later tracks. A full track restart is also just a button press away. This makes it so tempting to start again after every minor error that I often found myself in a hyperspeed Groundhog Day scenario where I’d spent five minutes obsessively repeating the first 15 seconds of a track.

I have a personal attempt threshold when it comes to Trials. On the first few retries I might improve, but after that I become suddenly incapable of playing properly and will mess up basic jumps or obsess so much over minor shifts in my rider’s weight that I can’t react quickly enough when I get to a new section of track. So much of Trials’ physics feels instinctual to me; the second I start overthinking it is the second my skills desert me.

Proper online multiplayer is back after an unpopular absence from Trials Fusion, though the local multiplayer options are a little thin. There are only a few four-player courses, and I was sad to discover that riding the tandem bike, which two players control simultaneously, just made me want to fight with my partner. I reckon you’d have to have Pacific Rim levels of mental synchronicity to get much out of it.

Trials Rising squeezes a lot of hours out of its track selection in single-player. It asks you to replay courses with different special conditions — do 10 front-flips, beat a randomly-selected online rival, finish with fewer that three restarts — for more XP. Past about level 45-50, it starts to feel like Trials Rising is artificially slowing you down, making you grind for XP by replaying courses; unlocking the Hard tracks is a real slog.

The game pairs you with a rival or few on every course, ghosts of other players who will zoom ahead of you or lag behind. Essentially, you’re playing against replays of other people’s performances. Keeping an eye on these ghosts can show you where you’re messing up or reveal new routes through a course, but I found that the rivals I was paired with were sometimes either way below my skill level or so difficult that it actually impeded my own progress.

For instance, new tracks are gated off by arena challenges, sequences of tough motocross trails that unlock at a certain level and match you with eight players. You have to beat all of them to progress. On one of these, I was stuck on the final trial for more than half an hour, trying to beat a continually front-flipping player who had found a near-perfect route. This was immensely dispiriting, as it wasn’t my own skills that were lacking. I just wasn’t quite as flawless as the rival that had been picked out for me.

That was, however, the only roadblock I encountered in this massively enjoyable sequence of courses and challenges. There are no quippy announcers or half-baked storyline a la Trials Fusion — just a few different bikes and a map full of beautiful tracks to ride them on. A lot of them are incredibly good-looking, a world away from the industrial warehouses I remember from way back in the Trials HD days. One early course flickers between sterile film sets and the CG-enhanced movies that are being made on them, so that one second you’re revving away from a giant alien monster and the next you’re bursting through a studio window.

I’ve ridden bikes against backdrops of snow, desert and distant cities, even on a moving plane. The Asia tracks are particularly scenic and varied; a favourite of mine takes place in the shadow of Mt Fuji.

Performance is vitally important to a game as precise as Trials, so I was relieved to encounter no technical issues save three brief freezes over many, many hours of play on my PlayStation. The same can’t be said for the Switch version, whose foggy levels and low framerate marred the experience in last weekend’s open beta. I’ve not spent enough time with it to evaluate it properly, so consider this review pertinent to the Xbox One, PC and PS4 versions only.

I’ll be playing a lot more of Trials Rising in the coming months. There’s nothing like the agony and ecstasy of conquering one of its more difficult tracks, the heart-in-mouth tension of landing your bike on a near-vertical surface and revving just enough for the rear wheel to bite without flipping your rider backwards. Every tiny movement of bike and rider is significant and fully within your control. It’s a game about self-mastery, and believing you can do better. It helps that it’s also tremendous fun.