“I’m a little worried,” I overhear someone say while we wait in line for Bethesda’s fan event at PAX East. “There’s a live Q&A.”

The line-waiter was talking about an upcoming panel discussion with some of Fallout 76’s developers, including director Todd Howard. But the live panel came and came and went without incident. No one asked awkward questions. No one heckled. No one threw a plastic Fallout 76 bag loaded with rotten tomatoes at the developers.

Whatever people on the internet might say about Fallout 76, or Bethesda in the wake of its terrible launch, the fans at Bethesda’s Game Days event haven’t lost faith.

“From what I heard, it sounds like they’re making Fallout 76 into a game I actually want to play,” Nadav Kolodner, a fan and modder of previous Fallout games told Kotaku at the event while sitting at the bar. He abandoned the game after only playing for around six hours the weekend the game launched and doesn’t remember the period fondly.

“People were crashing servers, and taking game-breaking items and bringing them into starter areas, and setting off nukes that blew up the whole map to crash servers,” he said.

Kolodner was referencing an incident from the first weekend when a number of players who had reached the end-game from playing during the beta period crashed the server they were on by launching too many nukes at once. 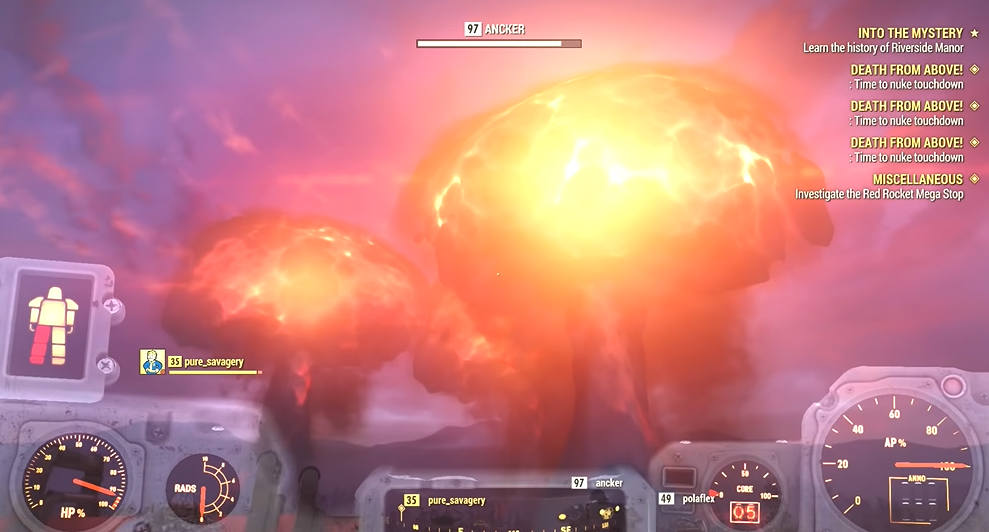 “I was online when that happened and that was not a fun experience,” he said. People were like, ‘Oh, that was so cool,’ and for the people who did it that was a pretty cool thing, but for me as someone who had just started the game it was kind of like, ‘Oh, everything is frozen, my game is crashing.’”

Kolodner, like a bunch of people, was turned off by how unstable Fallout 76 was when it launched, and all of the disparities between the vision Howard had shared on stage at Bethesda’s E3 press event and the actual experience people were able to play. 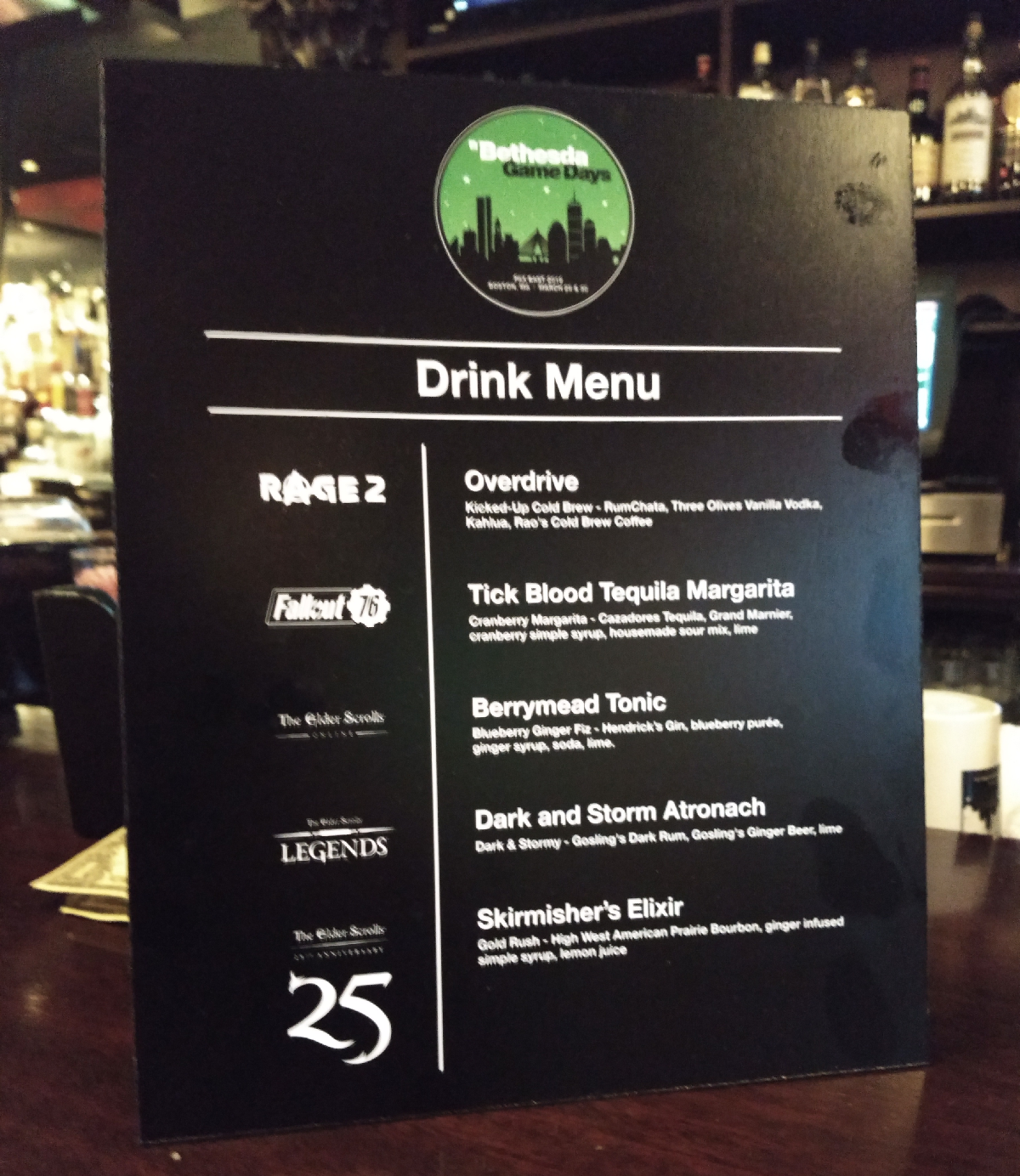 Bethesda did not go easy on the bartenders. (Photo: Ethan Gach, Kotaku)

This is the second year that Bethesda has hosted a fan event adjacent to PAX East. Across the street from the Boston Convention and Exhibition Center, a motley collection of gamers descends on an Irish pub and the comedy theatre above it to pay homage to the company responsible for some of the best open world role-playing games ever made.

Or to play the hands-on demos for Rage 2. And in some cases, just to snag the free T-shirts Bethesda gives out. There’s also free booze and food for anyone who happens to show up, which is part of why the event attracts a line that snakes out into the lobby of the adjoining hotel.

Whether it’s the Fallout and Elder Scrolls-themed cocktails or the piles of hamburger sliders and baked macaroni sun-bathing beneath pale heat lamps, the people I talked to inside were, for the most part, all on board with what Bethesda is doing with Fallout 76 going forward.

In the over 100 days since it came out, Fallout 76 has received seven numbered patches and plenty of hotfixes. Some have improved stability and removed bugs, while others have done just the opposite. The latest updates have also been adding new content though, which has given players something more positive to focus on.

In the update titled Wild Appalachia, the highlight so far has been the Fasnacht Parade, a time-limited event where players teamed up on the main street of Helvetia to take down a legendary sloth and earn rare masks.

It’s brought people together in a way the game’s existing public events and end-game nukes hadn’t. It’s also shown that the Fallout 76 experience can meaningfully evolve from where it began.

“It doesn’t really force you to do any teaming up,” said another player, Jaime Galvin, explaining the reasons he fell off the game. “You’re kind of just doing a solo game with other people there.” 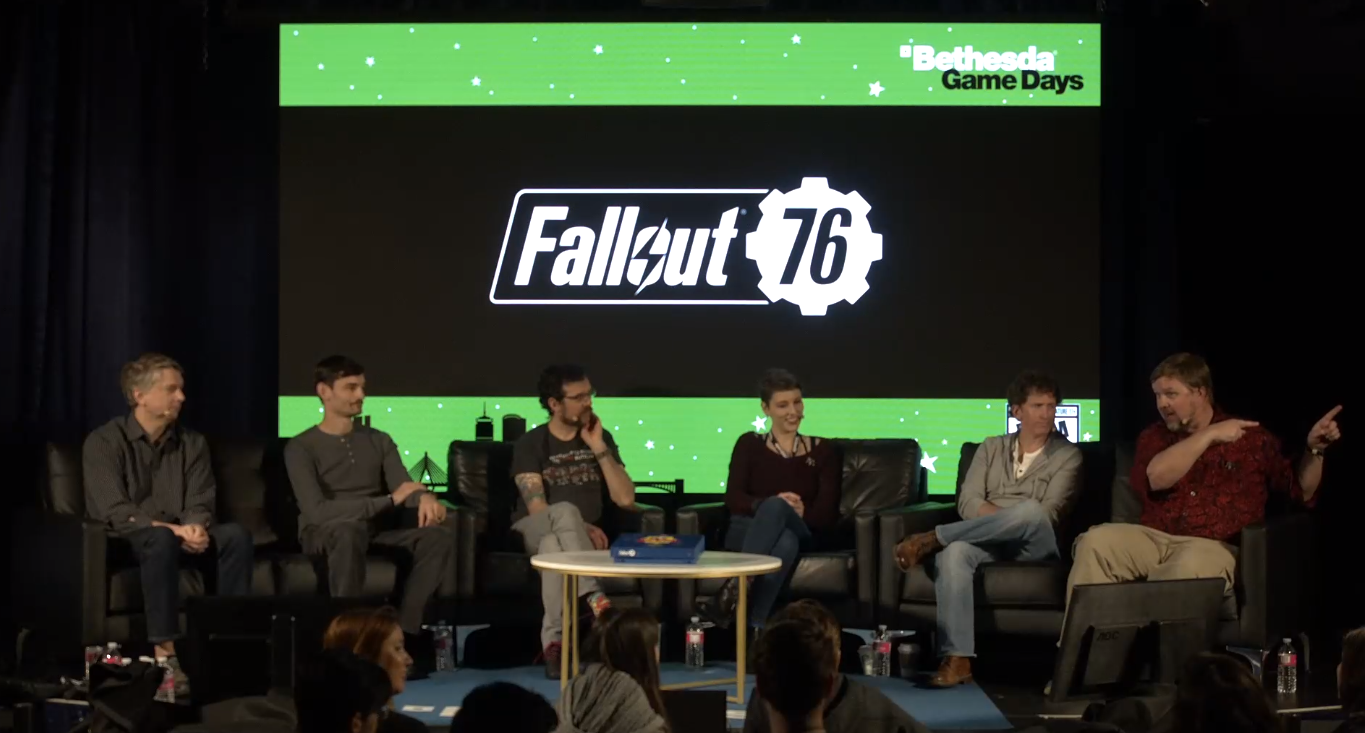 Michael Southwell, who arrived to the event decked out in a faux-leather Fallout 76 jacket, agreed. “I think if they just add more stuff to do, more NPCs,” he said. “When you listen to the radios or the holo tapes, you’re like, ‘Oh my god, I want to know this person,’ but then it’s either they’re dead or they’re a robot or something.” Fans who attended the event were given T-shirts and Vault Boy masks to commemorate the occasion and terrify people they meet on the street. (Photo: Ethan Gach, Kotaku)

The panel discussion at PAX East made him more confident about the future of the game, he said. “I think the fact that they’re acknowledging that it’s been a bumpy road — like, a really bumpy road — they’re not just like, ‘Oh, whatever, we’ll get past it.’ They’re actually paying attention and listening,” he said. “That makes me feel a lot better.”

Southwell said he was talking specifically about a moment early in the panel discussion, when director Howard talked about the game’s “ups and downs”. For the Bethesda diehards, that’s apparently enough.

Another fan, Jessica Kelley, said she is so happy with where Fallout 76 has gotten to after its rough start that she’s started spending more money on it. Her first big spend was upgrading her account to the $150 Tricentennial Edition, which netted her the celebratory Vault Boy saluting emote.

While Kelley agrees that the beta could have gone on longer and things could have been handled better, she wouldn’t have wanted Bethesda to delay the game to fix its issues.

“I think if it was released now, people wouldn’t have been as upset, but I think you’re always going to have a vocal minority that are going to be very loud and very angry about things they didn’t like,” she said.

For Kelley, it’s been a great experience, despite the bugs. “I’ve met more women in this game than I have in any other game,” she said. “How crazy is that? It’s like The Sims with murder.”