In the midst of mounting frustration with Anthem’s end-game loot grind, BioWare has announced a handful of changes to make it less gruelling. They don’t address all of the complaints players have had, but it’s a start.

The update, which is due to go live in the next day or two, will do three main things. First, common and uncommon equipment will no longer drop from end-game activities, helping put an end to the all too frequent pain of seeing what looks like a golden masterwork item in a pile of loot turn out to be a white item distorted by lighting effects.

Second, the resources needed to craft masterwork items from blueprints will be reduced from 25 masterwork embers to 15. Finally, the random stat rolls on gear, which Anthem calls inscriptions, will now have benefits catered more specifically to the piece of gear they’re on.

“Many inscriptions are not useful to the item they are attached to,” Ben Irving, the game’s lead producer, wrote on the Anthem subreddit last night. “Due to this, players need to get many masterworks of the same item to find a ‘good one.’

Players want the frequency of masterwork drops to increase to help with the above OR … They want us to change how masterwork inscriptions work so that they are more ‘useful.’” 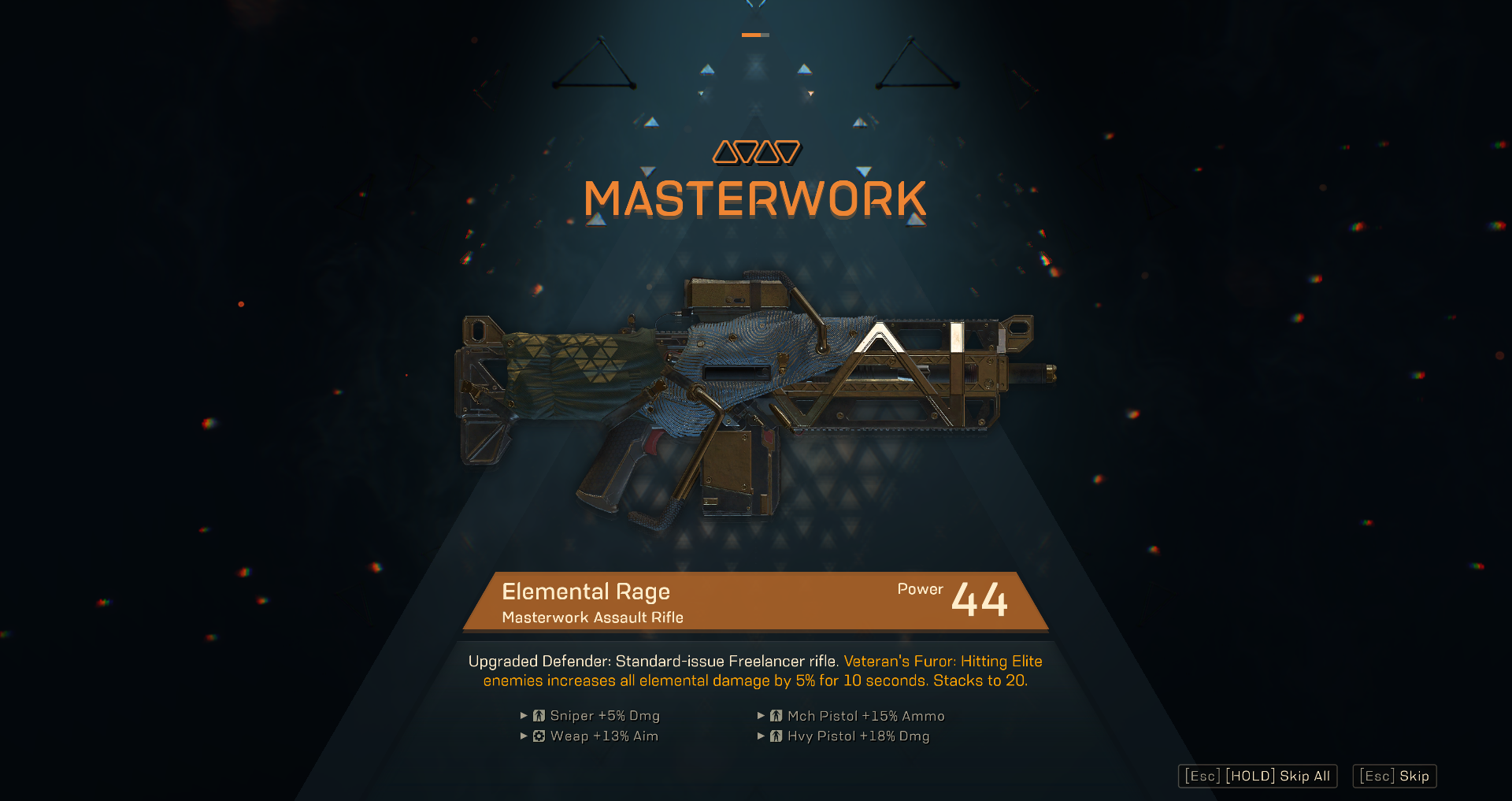 BioWare has decided to adopt the latter approach. Rather than boost the drop rates for masterwork and legendary items as some have requested, the studio has decided to make the stat rolls (inscriptions) on individual drops better so players don’t feel the need to keep grinding for additional ones.

Currently, it’s possible to grind for hours, get a new masterwork assault rifle, and then have one of the four inscriptions rolls on that assault rifle be something like “machine pistols do 9 per cent more damage” with a gear icon next to it showing that bonus only applies to the gun rather than the entire Javelin, making it completely useless (since it’s not a machine pistol).

Even when the stat bonuses aren’t item-specific, there can still be problems. The Colossus Javelin, for example, can’t even equip machine pistols, but the rest of its gear can still be full of machine pistol-related inscriptions.

Dear @anthemgame, can you guys PLEASE look into the way Inscriptions are rolled? Both the Weap and Physical bonuses on this LEGENDARY apply bonuses to damage that DO NOT APPLY to itself, and are therefore complete useless. Also getting Pistol rolls on COLOSSUS gear makes 0 sense pic.twitter.com/LlUU1vu26R

Since we still haven’t seen the new system in practice, it’s too early to say whether this will completely fix inscriptions. One of the other problems that currently exists is there’s no way to know what the best version of a particular inscription is, so when players re-roll their equipment for better ones, they have no idea what they’re aiming for. This particular update won’t address that.

It also won’t address one of the other problems with Anthem’s loot, namely that end-game rewards don’t feel in line with the difficulty of the missions they drop from. Tyrant Mine is the easiest of the three stronghold missions currently in the game so players keep running that one over and over, a recipe for boredom.

In addition, running missions on higher grandmaster difficulties doesn’t seem to significantly ratchet up drop rates, leaving some players feeling like they’re not worth the trouble. “Looking into this,” Irving responded when one commenter on the subreddit asked about this particular issue. “Understand the problem space for sure.”