BLACK Writer Kwanza Osajyefo On The Series’ New Sequel, And The Need For Diverse Comics Heroes

In 2016, Kwanza Osajyefo, Tim Smith 3, Jamal Igle, Khary Randolph and editor Sarah Litt took Kickstarter by storm with BLACK, a comic series that imagined a modern America where only black people could develop superpowers. Now WHITE, a sequel series, is on the way — and Osajyefo has provided us with an essay on why its themes are still important three years later.

For over half a century, the Justice League of America was comprised, exclusively, of white people.

Superman. Batman. Wonder Woman. All white. Even Martian Manhunter, a shapeshifter from the Red Planet, chose to adopt a white persona for his human secret identity: John Jones.

Time went by and comic book characters and superhero teams started to look a little more like their readers, a little more like both America and the world at large. In the wake of the success of Marvel Comics’ Uncanny X-Men and that comic’s international ensemble of heroes, new, “diverse” characters were introduced.

Were DC’s Gypsy and Vibe, the breakdancing superheroes from Detroit, stereotypes when they were introduced in 1984? Sure. But at least the Justice League was a little more diverse, right?

And so three years ago, we launched a Kickstarter for BLACK, a comic book that asked, “what if only black people had superpowers?”

It could go without saying that the premise of BLACK has a rather clear context, especially in the United States of America. It was hardly 50 years ago that segregation ended, after 100 years of Jim Crow, which was born from 250 years of the enslavement of Africans.

This has had a profound impact on the foundations of this nation’s government, economy and culture, but especially on the lives of modern black people existing with inherited inequality.

When we launched the BLACK Kickstarter in early 2016, it was in this context that we expected the concept might be controversial. The cornerstones of our current society uphold that, even in fiction, adversity to speaking candidly about black experiences in America exists in various forms.

The Kickstarter for BLACK connected with fans in ways we weren’t entirely prepared for. Corporate comics had largely been slow to showcase black superheroes, but readers were ready.

We were not going to wait for a black Batman. 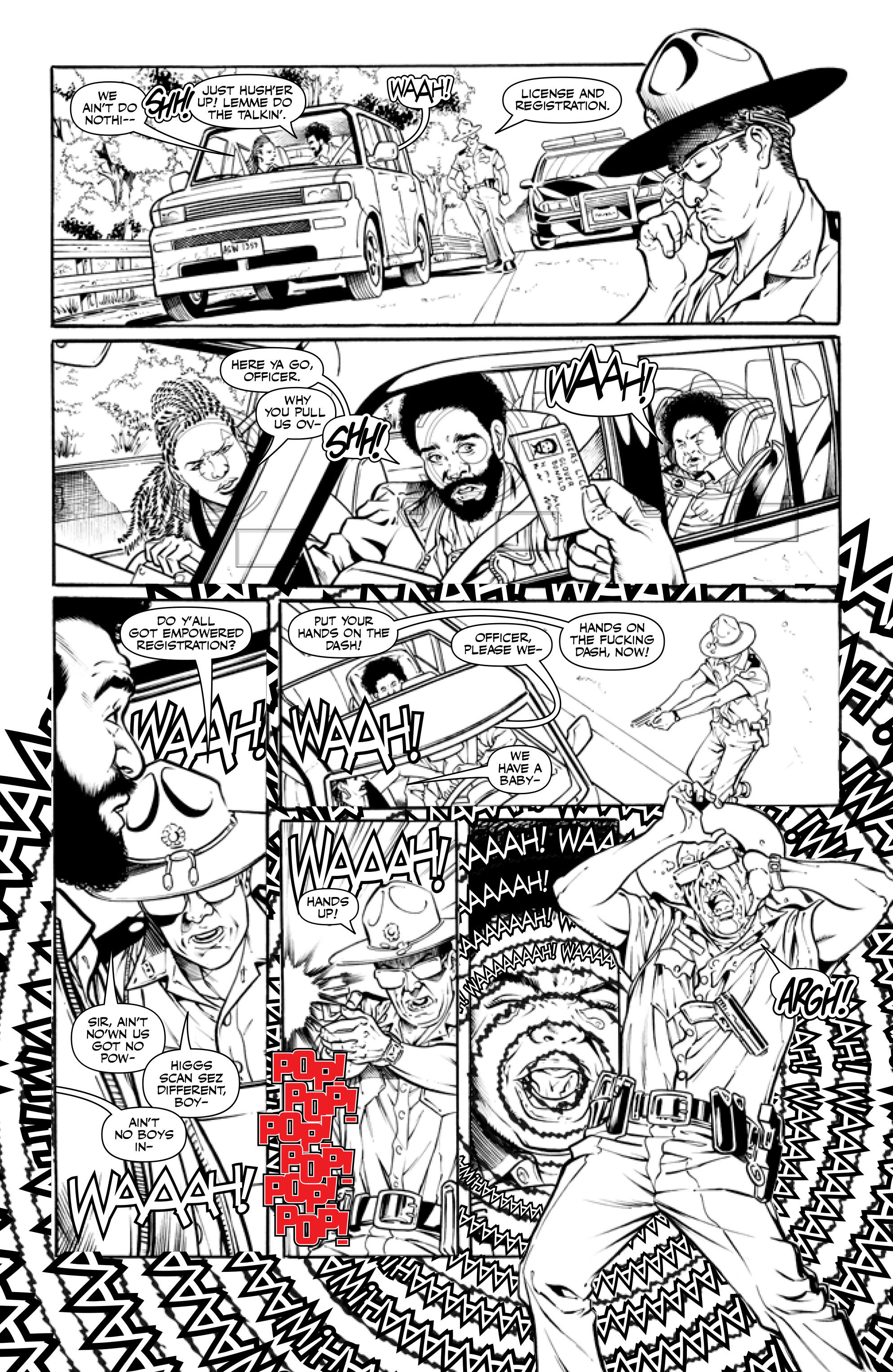 Early preview art from the first issue of <em>WHITE</em>. 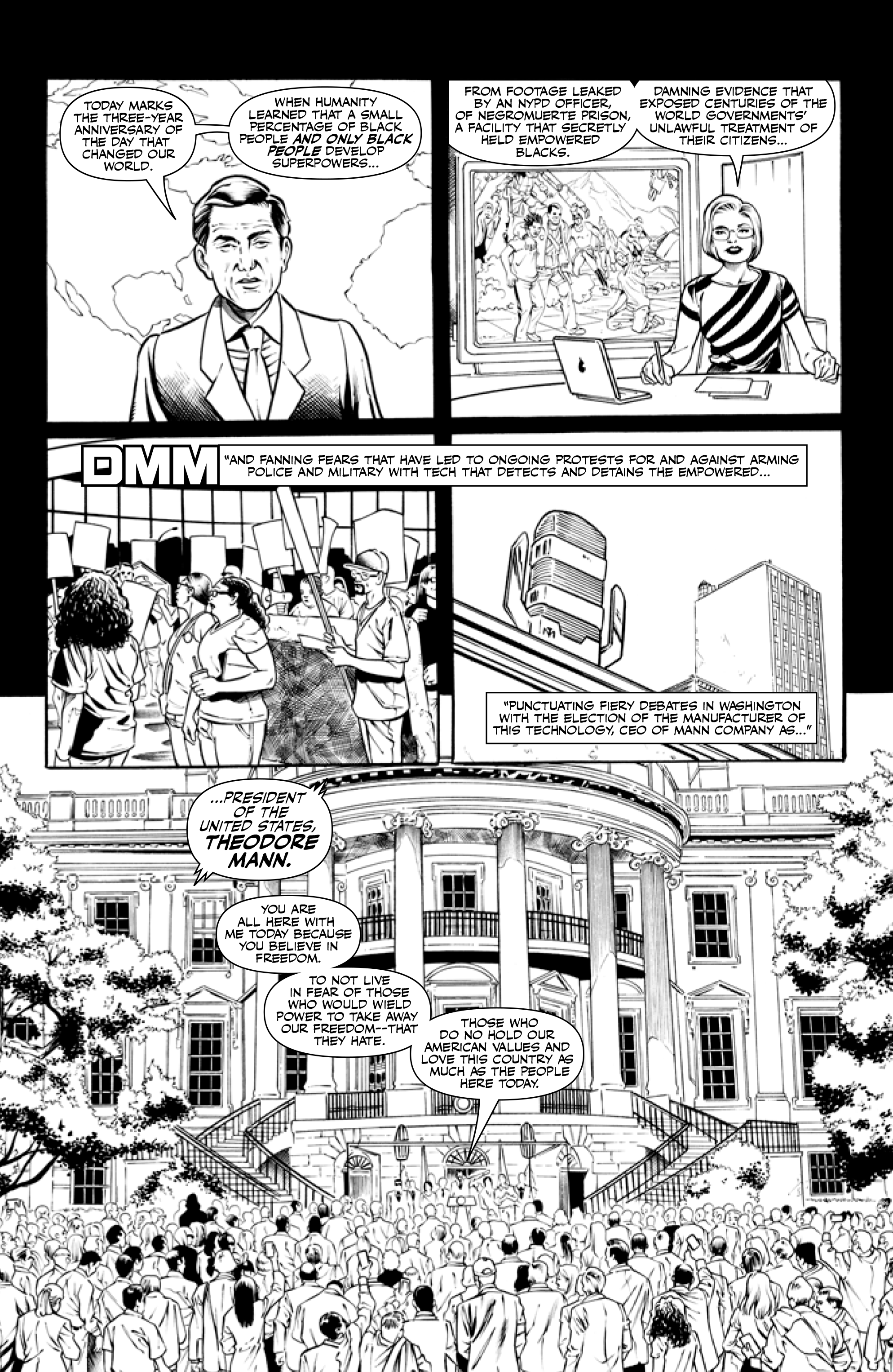 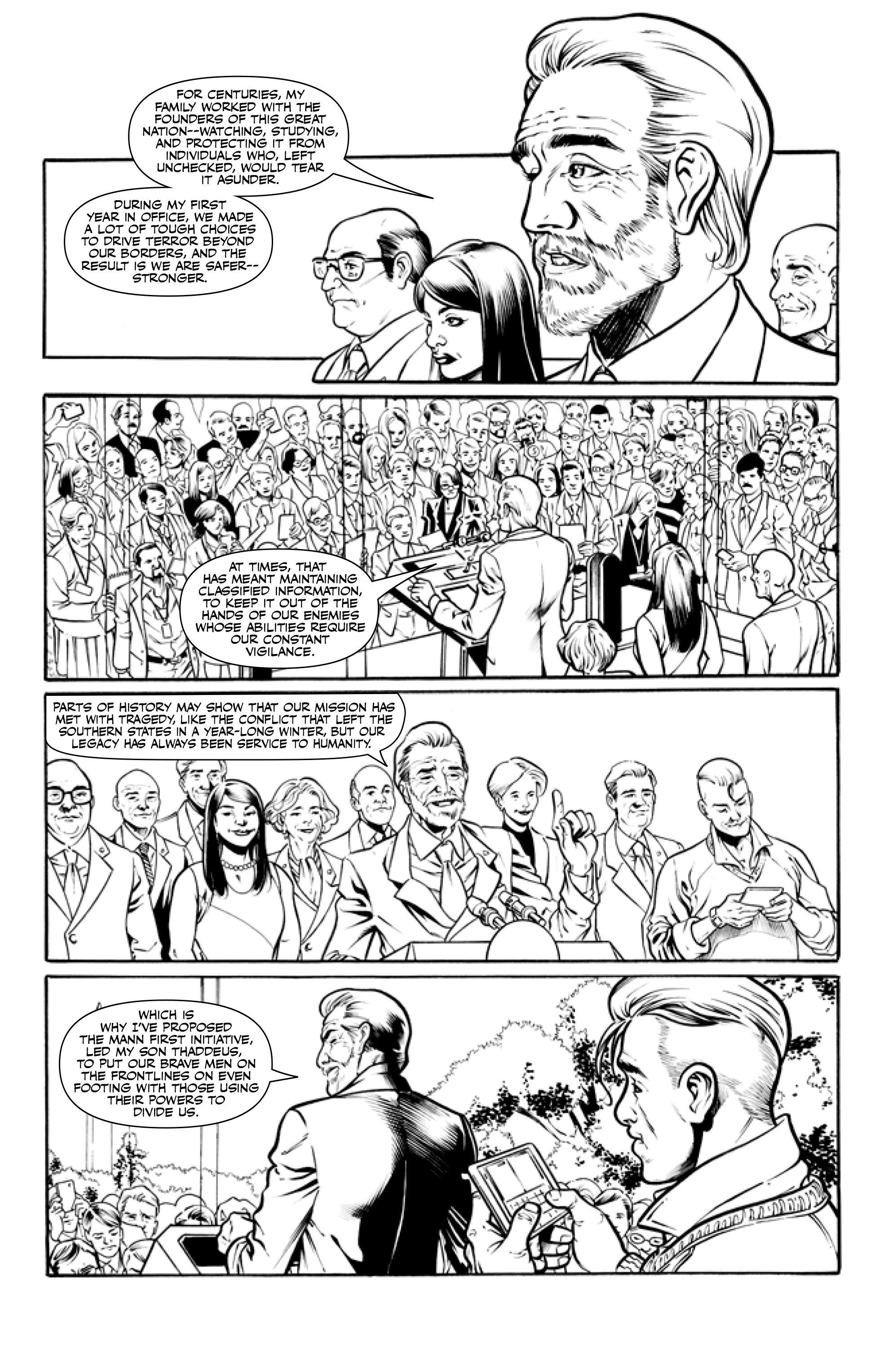 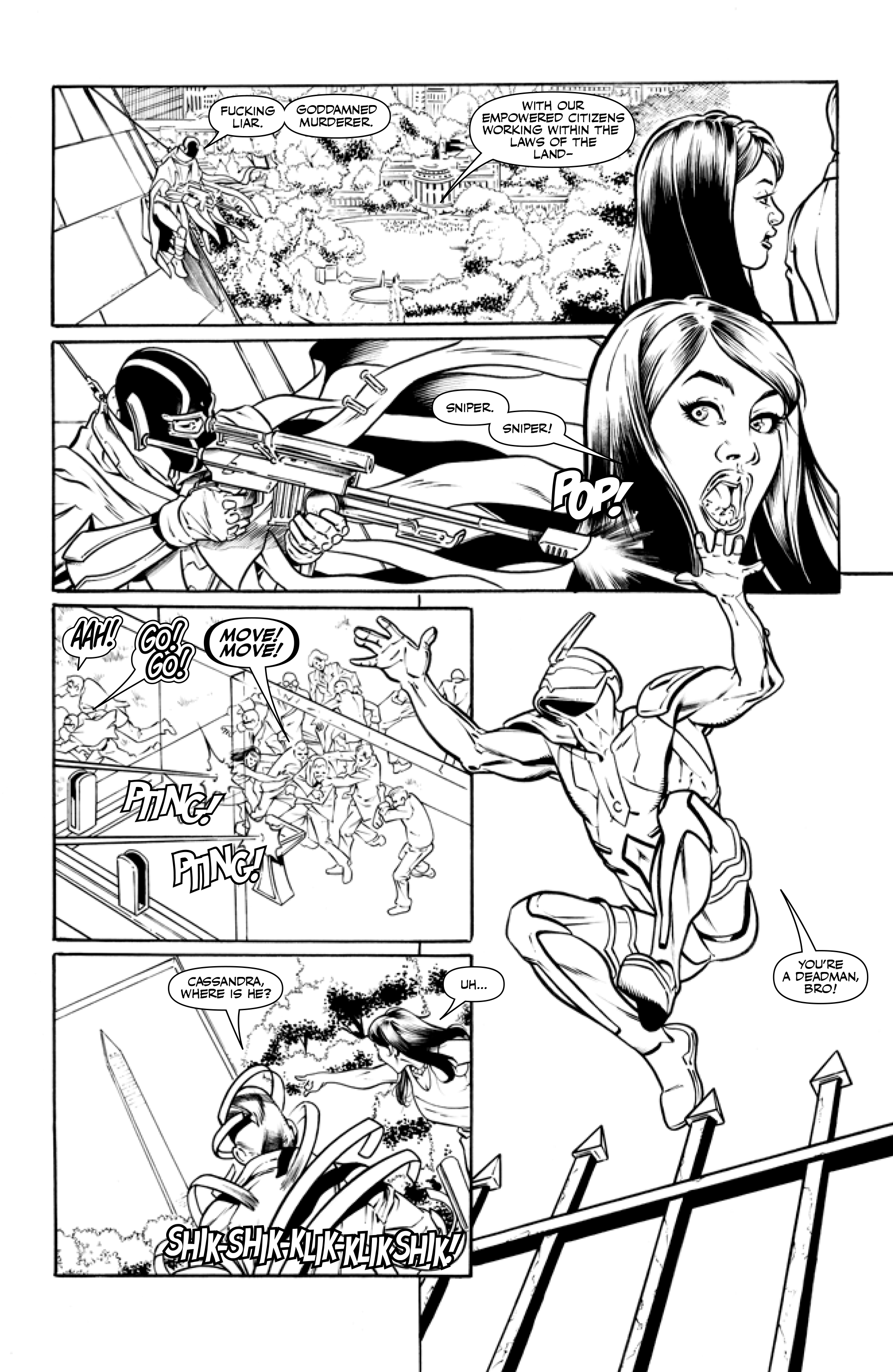 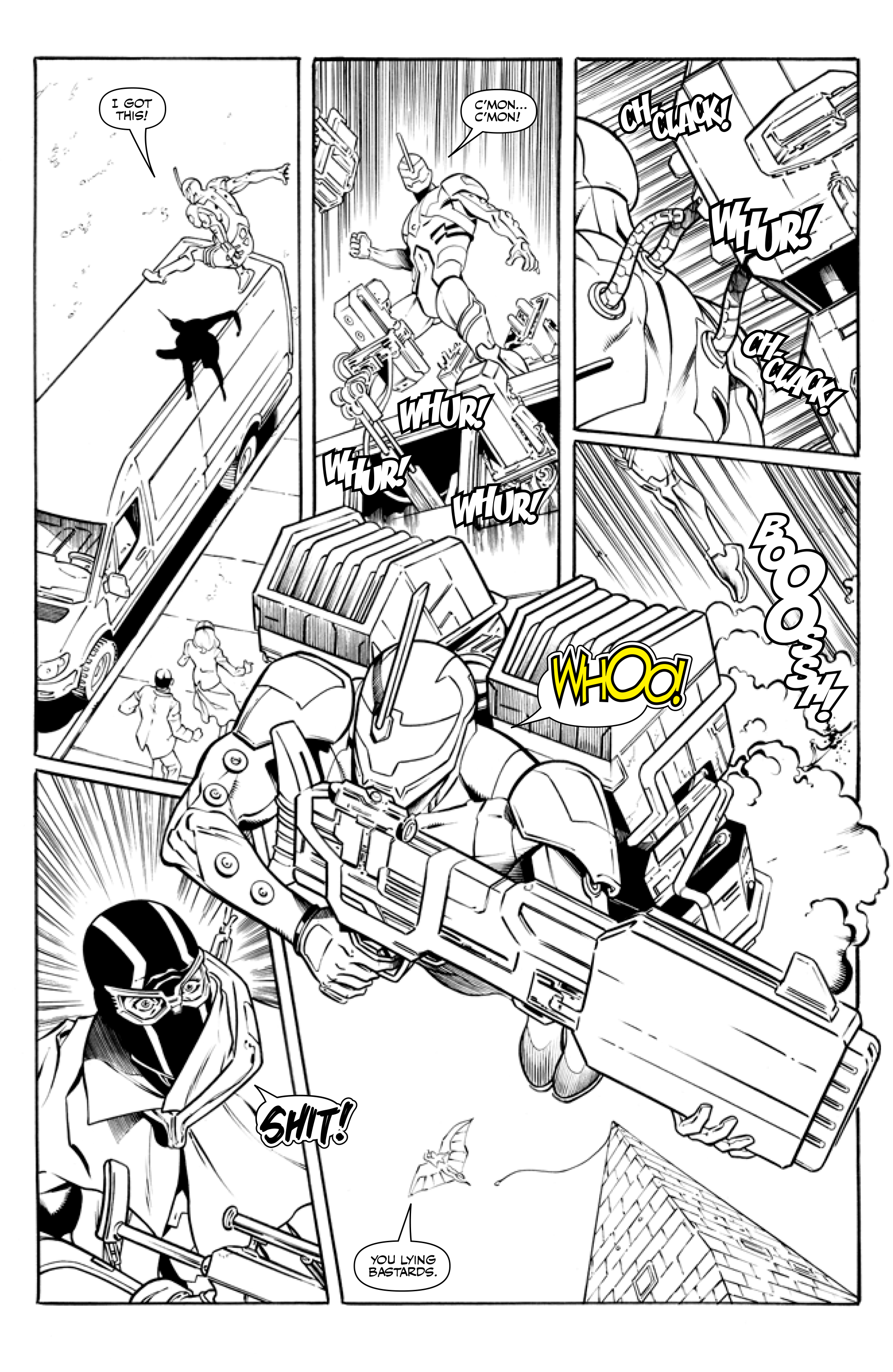 But discussing race is obviously jarring for people, especially those who have no perspective on, or are wilfully ignorant of, the very structural barriers and cultural biases that still exist in our society. There’s proof of that in simply presenting the premise of BLACK, which forces people to confront matters that challenge their views on race and racism.

What allows people to be quietly comfortable with the Justice League being entirely white for over half a century, but openly uncomfortable when superhumans are wholly black? And that brings us to 2019 and the sequel to BLACK: WHITE.

WHITE examines where such responses come from and articulates them through comics and a wider look at the world BLACK is set in. That’s precisely why we created this universe: To explore how these reactions are part of the many facets that uphold racism.

The aspects that quietly ignore uncles telling racist jokes at Thanksgiving every year. Components that make up thinking it is OK to wear blackface at costume parties. The characteristics that compel someone to call the police on a child for selling water. Whatever ingredients go into brands making products that look like Sambo. The rationalisation of Philando Castile being murdered in front of his wife, with their baby crying in the back seat of his car.

Separately, these things may seem disconnected, but together they are a dangerous formula that normalises hate.

It’s what allows people to go online and tell blacks they have no reason to complain because no one in today’s America is a slave. It’s what makes it OK to decry black people as diversity hires while not acknowledging why affirmative action still has to exist. It’s what excuses murder as “not following orders”.

Too often, responses to simply mentioning race range from dismissal to denial to anger. Not anger at injustice or inequality — anger at black people for pointing it out.

Because that is not normal.

WHITE asks, “How does a nation struggling with a history of racial inequality cope in a world where only black people have superpowers?” In our series, there’s a newly elected President of the United States stoking national tensions to win public support. The main person standing in the President’s way is X — AKA Kareem Jenkins — who has become a symbol of resistance against the Mann Administration.

How would you react to that?

The Kickstarter for WHITE is now open to backing — to learn more about the series and support the project, you can check it out here.