Everything About Anthem’s In-Game Stores Is Bafflingly Bad 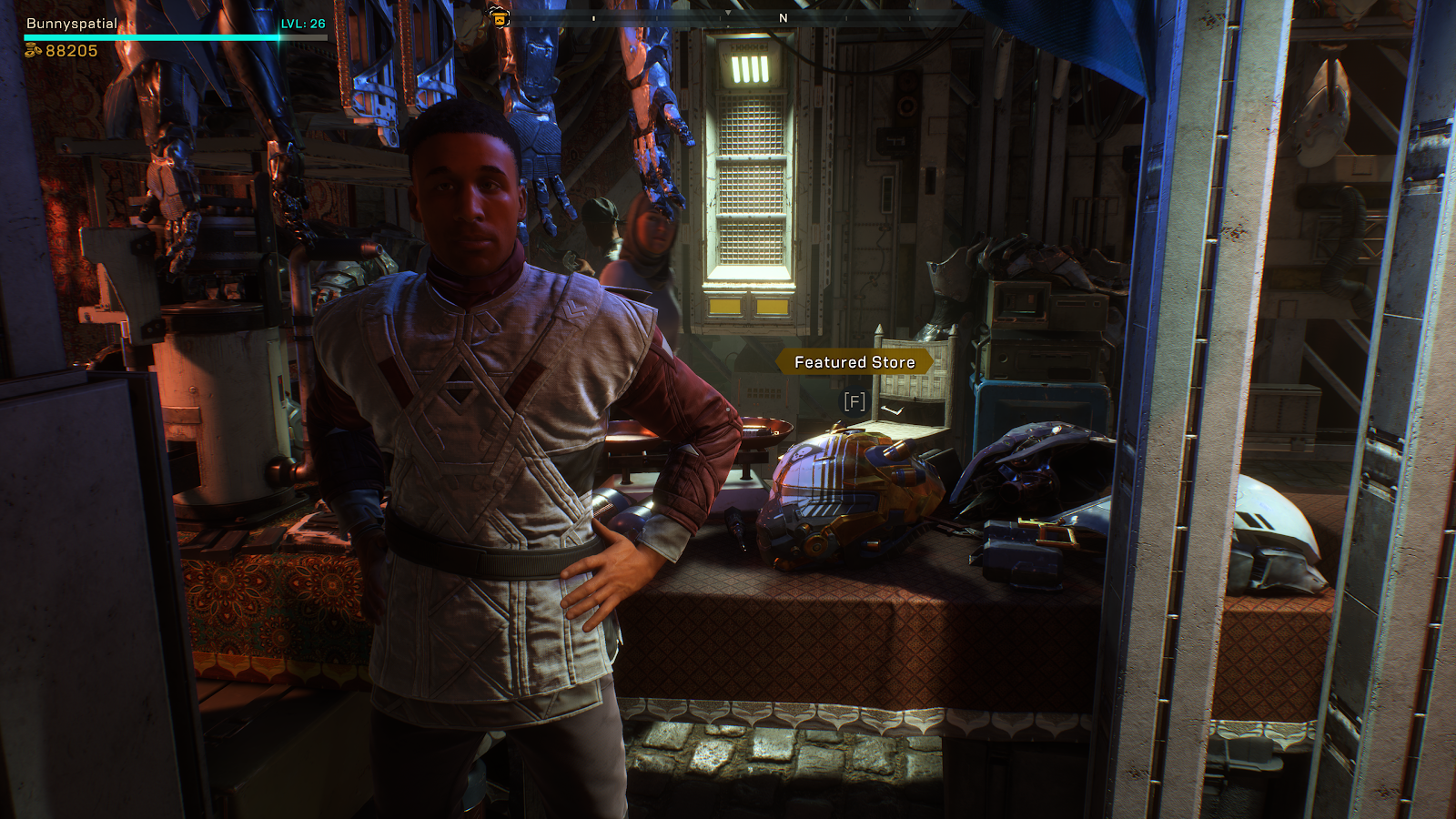 Every time I log into Anthem I stop by one of its in-game stores, and every time I am disappointed. The selection is bad. The three-day refresh is bad. Even the locations of the in-game shops are bad. It boggles the mind.


Pictured above is Prospero, the first vendor players come across in Anthem’s home base of Fort Tarsis. Prospero talks a big game: He says he’s helping Freelancers bring the thunder and lightning by selling new armour, emotes, and decals to decorate their mech suits. Propero has six things for sale at a time, rotating out every three days or so. Six whole things. 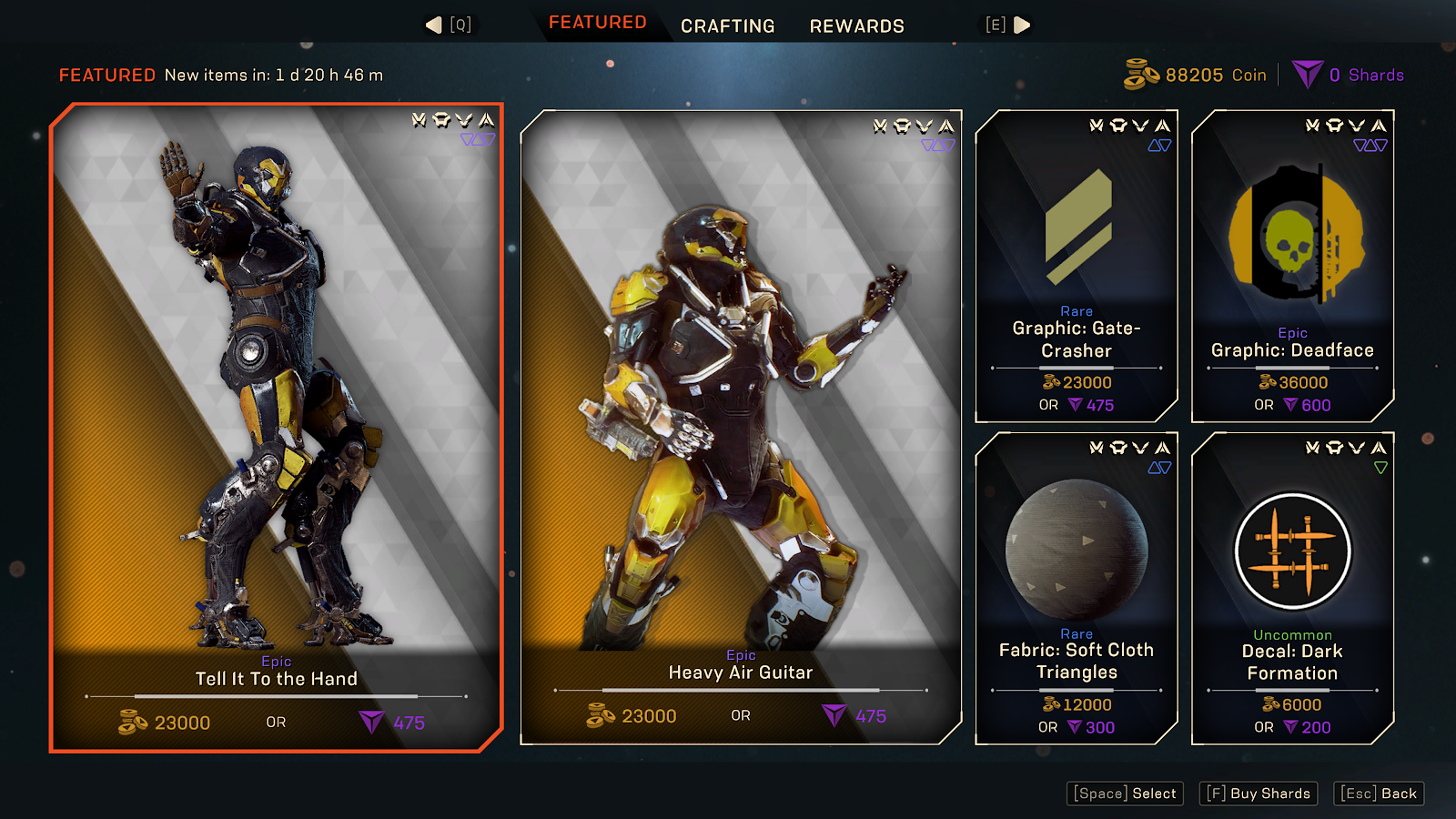 As of this writing, Prospero is selling a “Tell it to the Hand” emote, the coveted “Heavy Air Guitar” emote, three decals, and a fabric texture. Players can spend their hard-earned coin on these items or buy them with “Shards,” Anthem’s real-money currency.

It’s all cosmetic stuff, which is fine. No one can use real cash to purchase anything useful. But with only six items in rotation at a time, chances of a player finding anything they want in the store are slim. Let’s visit another vendor. How about Sayrna, voiced by the outstanding Kristen Schaal, AKA Louise from Bob’s Burgers. She runs Anthem’s Regulator Store. Let’s see what she has for sale.

Oh. The same stuff. Well, Fort Tarsis is pretty big. I suppose it is nice to have access to the store in different locations for the sake of convenience. 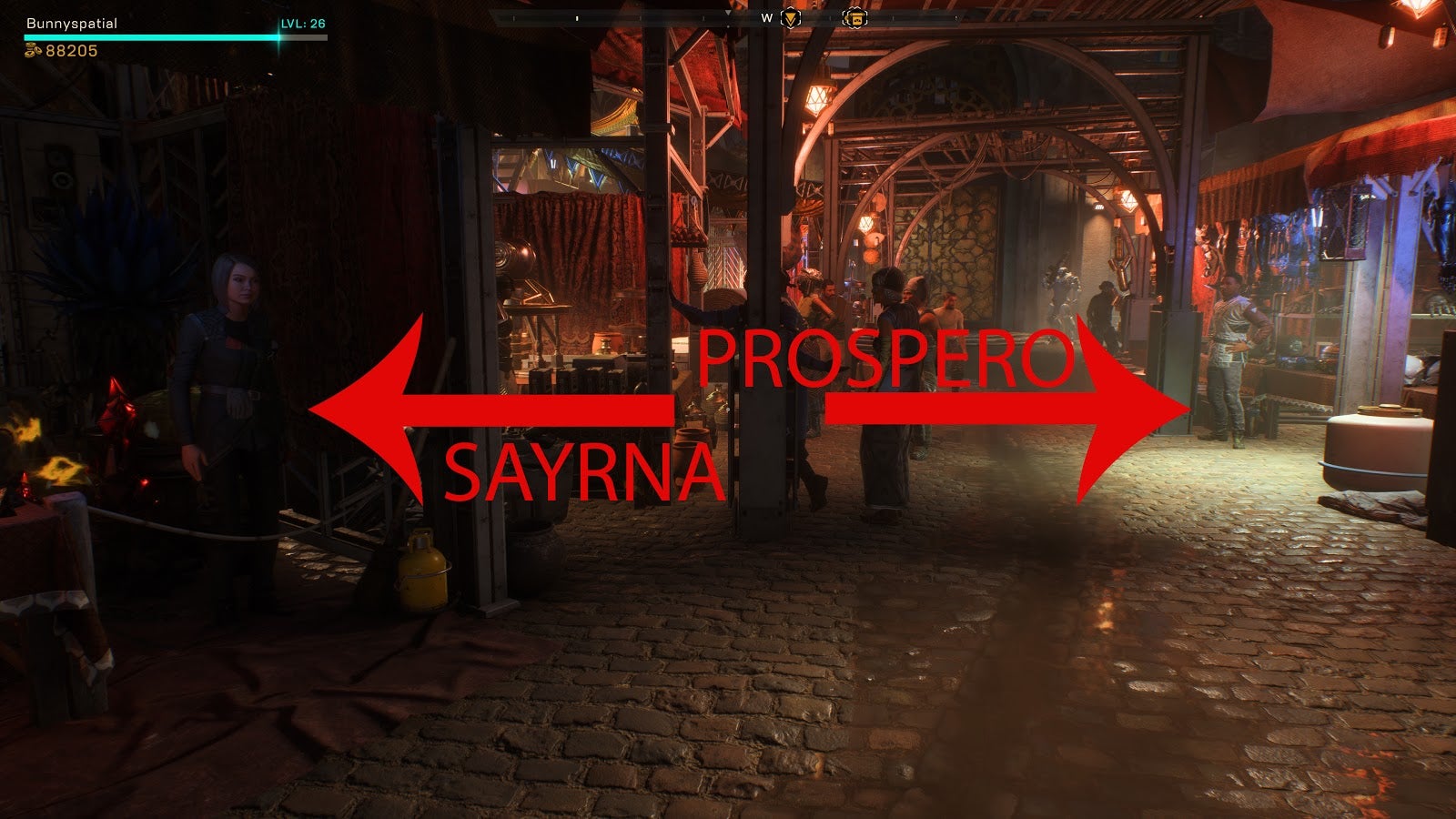 Yeah, I don’t know why there are two stores feet away from each other selling exactly the same things. Confusing things even more, sometimes, when I open Prospero’s shop, it triggers a voice clip from Sayrna thanking me for dropping by or telling me she’s got the best stuff in Fort Tarsis.

Confusing matters even more, entering the main menu of the game and navigating to the “Featured” tab brings up the same damn store no matter where you are in the fort. 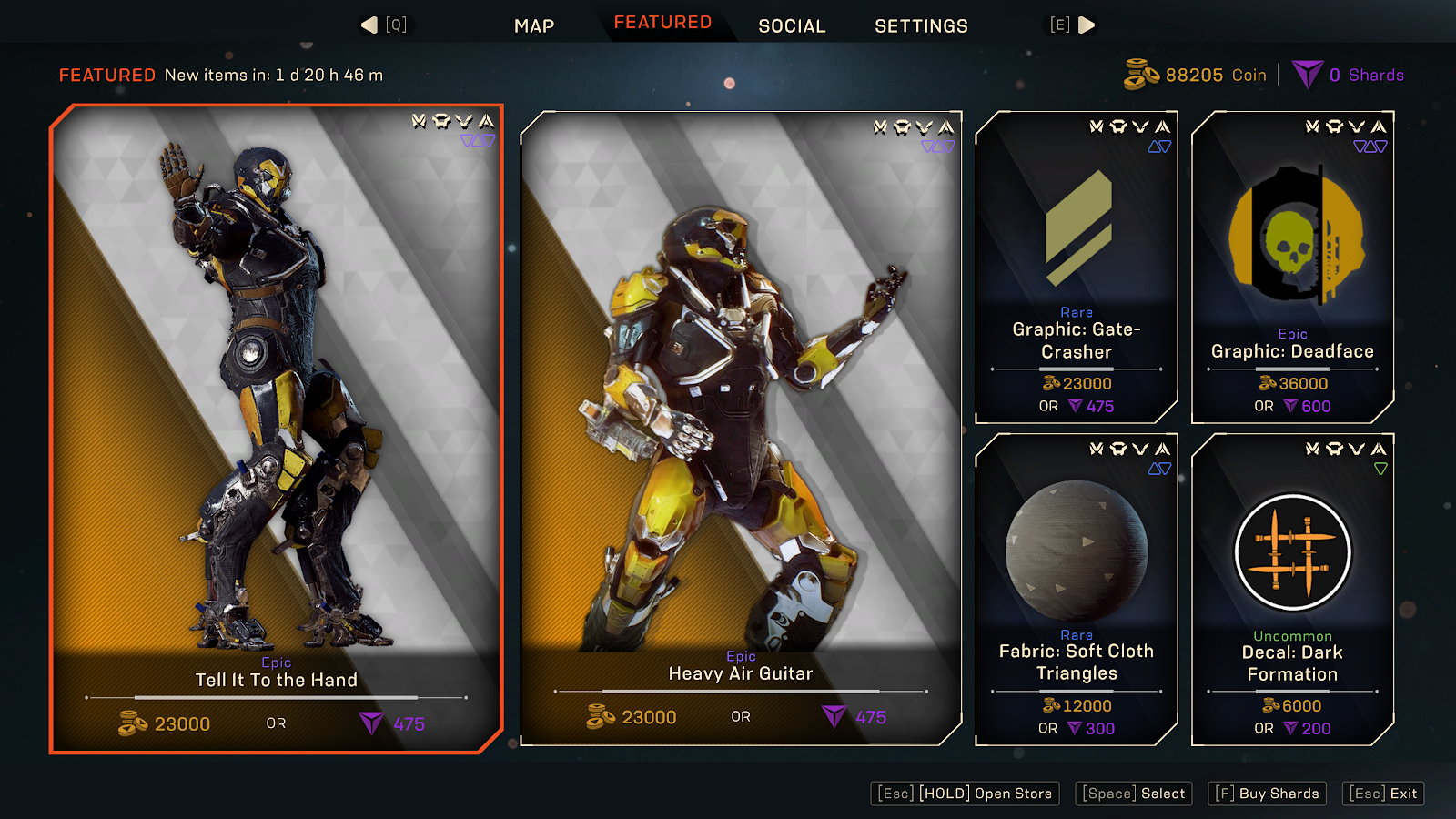 The placement of the stores makes no sense. Neither does the six-items-on-rotation thing. During a Twitch stream several months back, BioWare developers showed off a slew of material types, decals, and parts that could be acquired in-game to spruce up players’ rides. Now the game is out and we’re being fed a slow trickle of items.

A handful of decals and one or two materials are on sale at any given time. We’ve seen some special mech parts show up in the store since launch, but it looks like there are only four variations for each of the four mech classes so far. 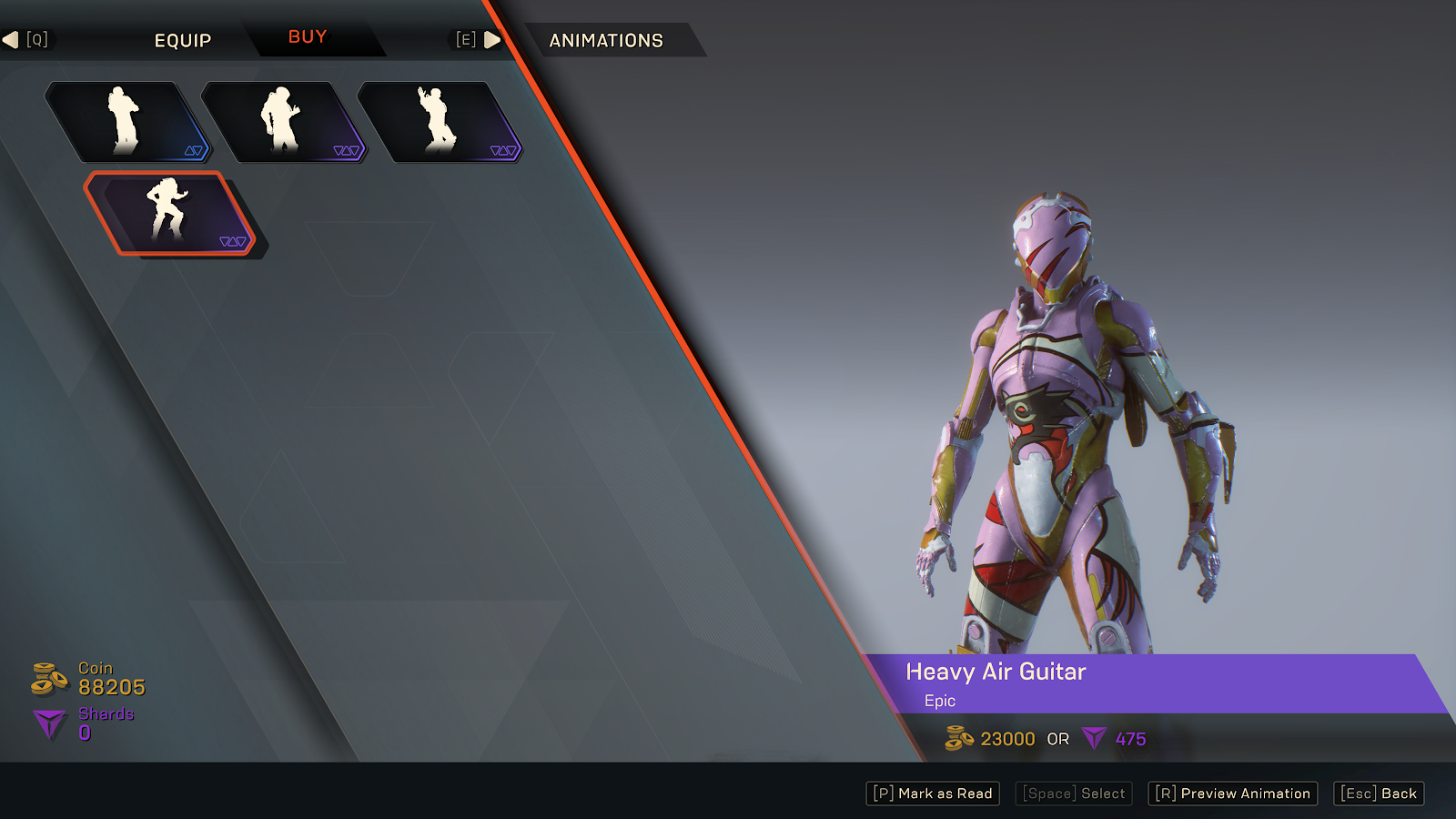 We’ve got too many places to buy too few things, with days of waiting between in-game shop refreshes, hoping something cool shows up. It’s nice to see EA and BioWare going light on the microtransactions, but how is my robot suit supposed to be as pretty as it can be if I don’t have access to more options? 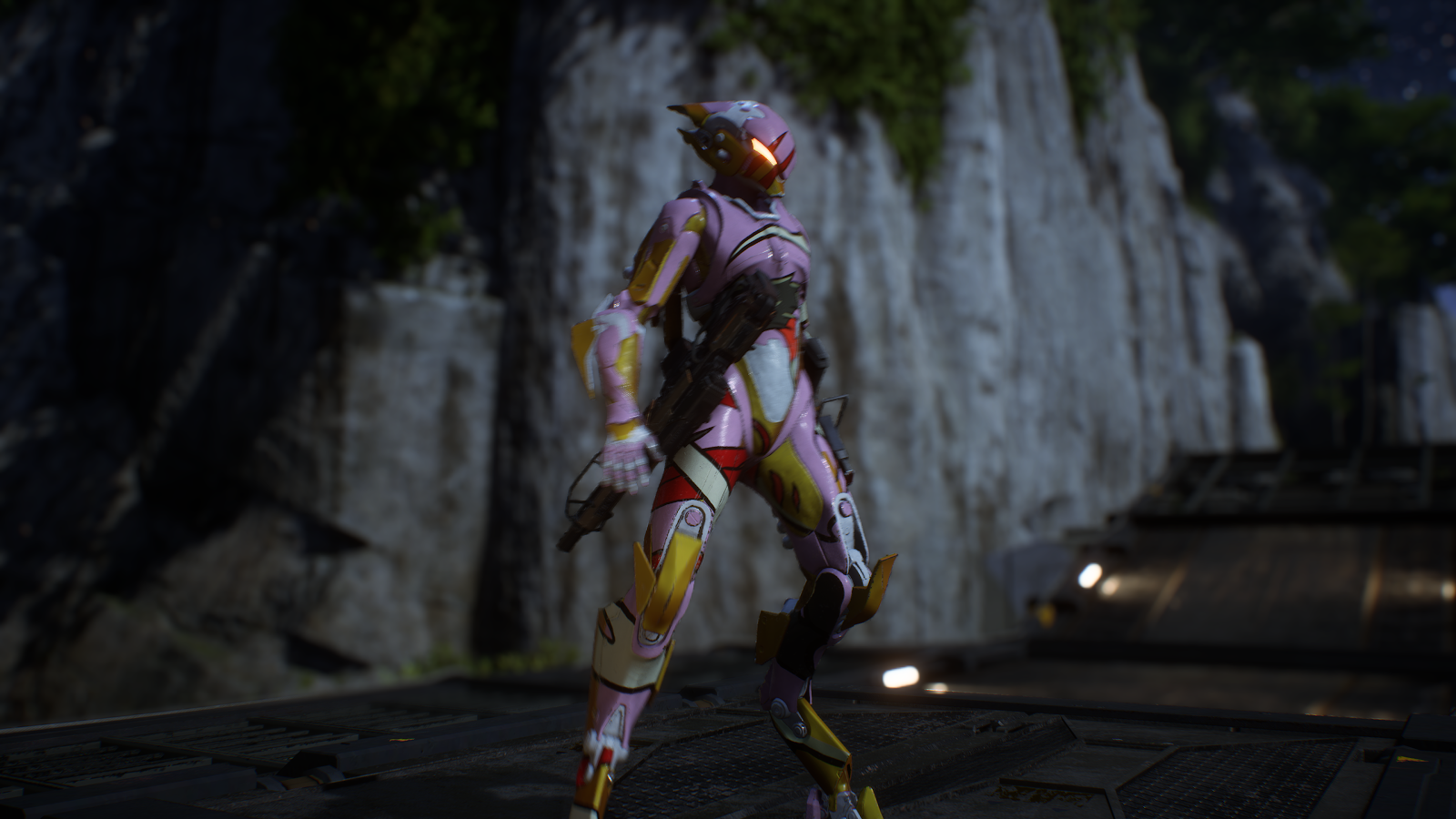