I became unreasonably passionate about fantasy sports for the very first time in my life. Not fantasy football or baseball or anything like that. I got into fantasy birdwatching.

Birdwatchers, or birders, know that the activity can be incredibly competitive already. The world’s most serious birders participate in Big Years, travelling thousands of miles across the continent (or world) to spot as many different bird species as they can in a calendar year. Not everyone can abandon their lives to chase great black hawks and red-flanked bluetails, though. So a software developer used a citizen-scientist bird database to create fantasy birding, for those seeking the excitement of competitive birding at home.

“Fantasy birding is basically the offspring of three unrelated obsessions of mine,” says Matt Smith, fantasy birding’s creator. “One is obviously birding, which I fell into pretty hard as a kid in Mississippi. The second is sports, baseball in particular, which always turned me on because of all the numbers. And the third is making things for the web.”

Participants in the main game compete to record the most species in the American Birding Association “area,” functionally the United States and Canada. The difference is that fantasy birders don’t have to spot the species themselves. Using eBird, a citizen-science database run by Cornell University where birders log their sightings, players select single locations on a map each day, and get credit for a bird if a real-life birder spots that species within a 10-kilometer radius that day. There’s also a global game for intrepid fantasy players hoping to spot birds around the world.

The game tracks rarities as well, and in the future, Smith hopes to add scoring variants that award more points for rarer species. Currently, Smith issues challenge to spot certain birds and gives out awards over email.

The general strategy is similar to that of most fantasy sports—the more you know about the sport itself, the better you’ll do … to a point. Different birds have different habits—certain species of ducks and gulls you’ll find only on the ocean, shorebirds mostly prefer to hang by the shore, while birds like harriers and bobolinks inhabit grasslands.

Specific habitats like wetlands will have more species than urban areas, but cities along migratory routes like New York can trap migrating birds, including many species of warblers. Since only your first sighting of a species gets counted, it pays to explore lots of different locations and to return to the same location several times during the year. Vagrants from other countries might show up whenever, and the game’s landing page lists the most recently spotted ones.

The fantasy birding league has already drawn 358 players. The user MaxBirding in first place has already spotted 549 species, including 50 rarities, since the competition began in January. It’s a fun way to get into the spirit of a big year without having to leave your house. 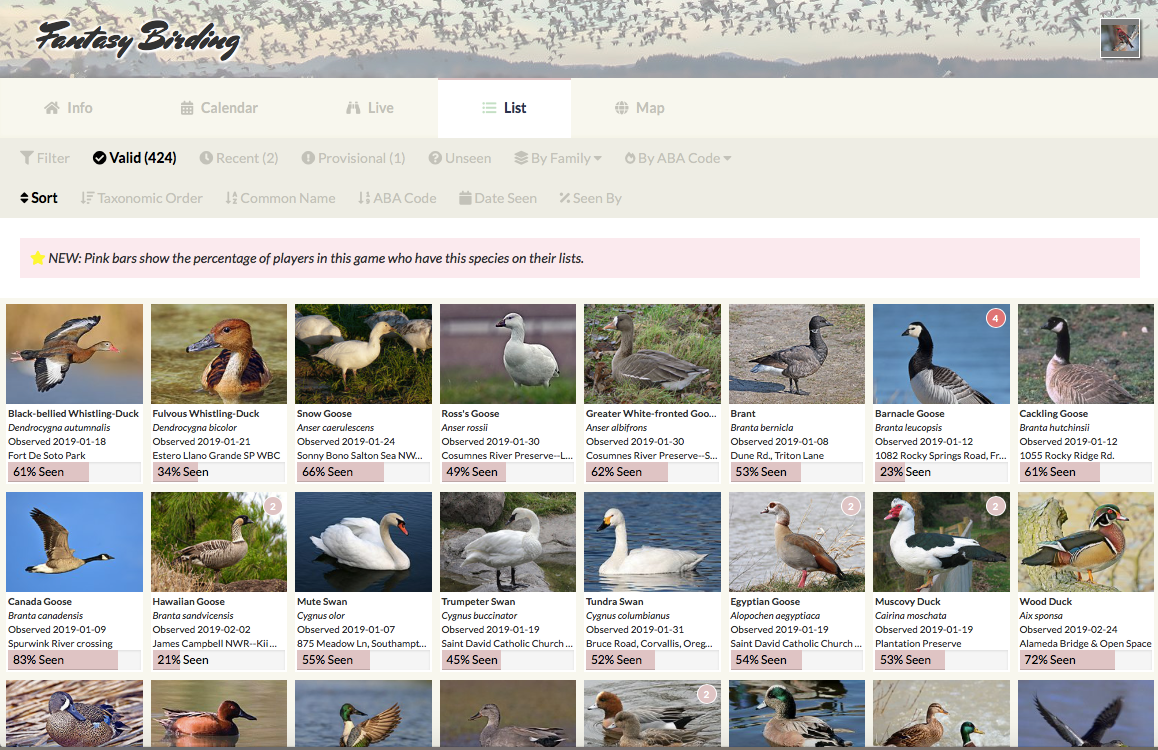 I’m a birder, and I got fucking INTO it – at first. I’d stake out rarities and waste time on eBird so I could target that location to fantasy bird the next day. I’d read that razorbills and a thick-billed murre, ocean birds in the same auk family as the puffin, had shown up at an inlet on Long Island, so I set it as my location for the first four days.

I nabbed 53 species including an uncommon duck called the king eider and another uncommon auk called the dovekie. I even committed an act of inside birding: A friend told me about a rarity from Eurasia called a brambling that showed up at his Northern Minnesota feeders before he reported it more broadly, so I knew to look out for it. I peaked around 25th place on the leaderboard.

But then, well, the weather began warming up, and real birds started showing up in my real-life birdwatching spots. I sort of lost interest in fantasy birding since, unlike fantasy football, it’s pretty easy to play the sport in real life without much commitment. Still, on rainy days or while procrastinating at work, I’ll find myself scanning eBird and reviewing my fantasy list, living vicariously through birders across the country.

Smith isn’t sure where he’ll take the app next, whether it be smaller games or scoring based on species’ rarity. He’s already added a global feature, for those hoping to spot birds around the world. But he has most enjoyed the small community of “geeky and competitive” players who have taken his creation seriously.

“It doesn’t matter how ridiculous the thing you’re doing is,” said Smith. “If enough people do it together, it’ll be a good time.”