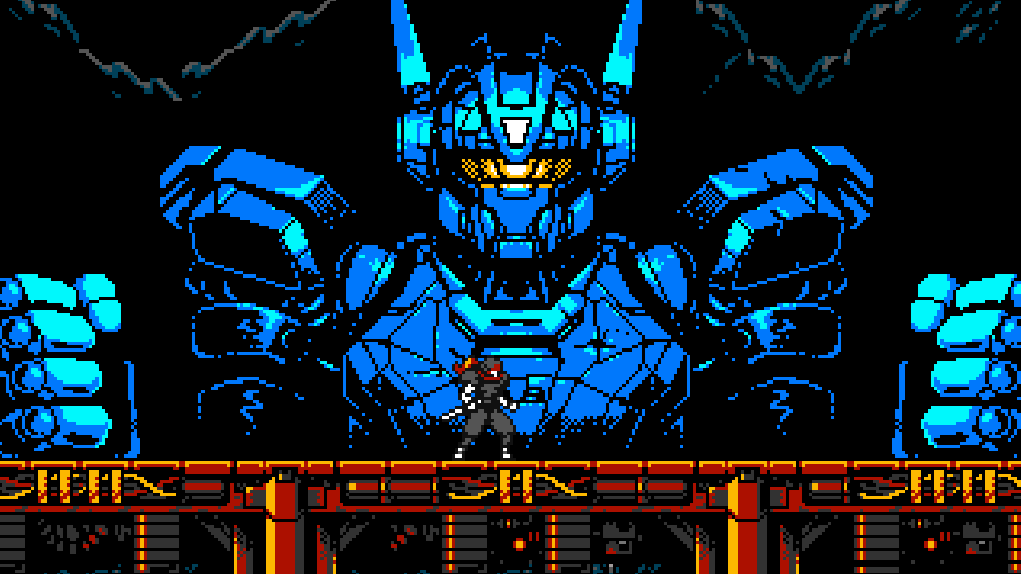 Cyber Shadow is a retro-looking action platformer that that looks beautiful and controls just as tightly. There have been a lot of those recently, like The Messenger, which channeled Ninja Gaiden, as well as Bloodstained: Curse Of The Moon, a mini-ode to classic Castlevania.

Cyber Shadow isn’t entirely original in that regard, but based on two of the stages I played here at PAX East in Boston it’s as good as any of them.

You play as a ninja trying to rescue the rest of his clan from a master-race of robots that’s harvesting them for their ancient, mystical ninja powers. Using a sword, your jumping prowess, and special ninja abilities acquired from destructible objects littered throughout the world you navigate a series of stages that play like a mixtape rather than one-to-one homages of some classic games.

There are elements of 8-bit Ninja Gaiden, some Mega Man and the snaking paths and occasional backtracking of a Castlevania.

There’s also an industrial, sci-fi edge to it all. The side-scrolling backgrounds depict cities ravaged by the uncompromising march of artificial intelligence. Robots fused to the environment fill corridors with deadly plasma blasts. While Cyber Shadow’s presentation and feel are dripping with nostalgia, its world is brought vibrantly to life thanks to the detail and effects afforded by modern hardware.

Aarne “MekaSkull” Hunziker, the game’s creator, told Kotaku in an interview that there are other influences as well, including Batman on the NES whose bold, black-based backgrounds sit in strong contrast to more colourful contemporaries. Cyber Shadow is a passion project for Hunziker, what he called “a gift to myself.”

While Yacht Club Games, makers of Shovel Knight, are publishing the game and assisting with QA testing, the only other people involved are composer Enrique Martin and sound producer Jake Kaufman. 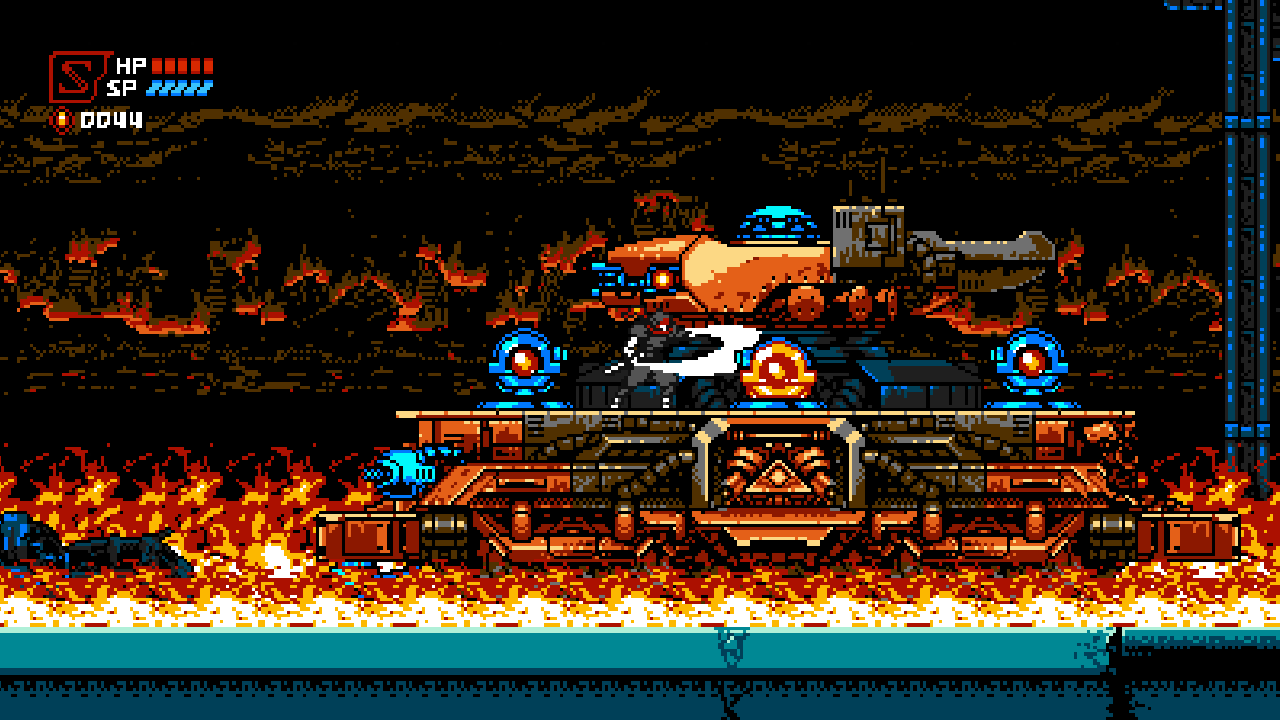 Hunziker said he started his journey into making games by hacking ROMs, manipulating the visuals of classic games to transform them into something familiar but new. He then set out to make his own game seven years ago, only to scrap it four years later and start coding what would eventually become Cyber Shadow from scratch. Even when things were finally coming together there were times he felt like bailing.

I was only able to play two stages during my demo, but during that time it certainly felt like that time has paid off. While elements of the gameplay, like expending magic points to throw shurikens or breaking a lamp to pick up a new fire ball ability, have a clear and obvious lineage, the world they play out in feels distinct and fleshed out, despite how rarely I was able to directly interact with it. 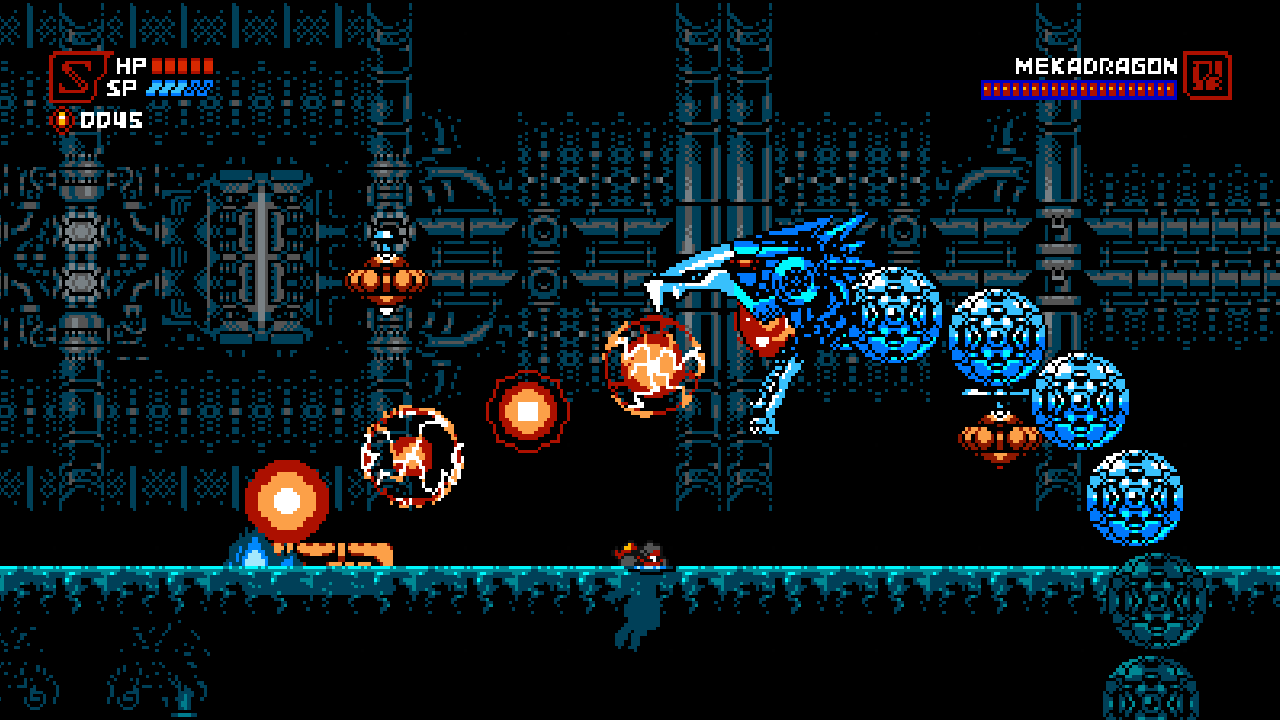 The gameplay isn’t shallow either. At the end of the demo, with no introduction, I was thrust into a fight with a cyborg ninja dual-wielding an assault rifle and a katana. Even without any narrative dressing, the stakes were palpable, and the encounter took on an interesting arc of its own as I realised the a fiery ball of light orbiting my character could be manipulated like a yo-yo by timing my movement and attacks correctly.

Rather than fighting the cyborg head-on I was able to rip him apart by dodging his other attacks. For the most part. I was able to take him within an inch of his life before dying myself.

Hunziker said almost every little thing in the game has some significance to him. A series of antenna towers that appear in the background at one point aren’t just part of the general, post-industrial aesthetic that permeates the game but one of the tools its AI-based creatures use to communicate with one another, at least according to the more detailed fiction presiding over Cyber Shadow in Hunziker’s mind.

The game doesn’t have a release date yet but it is planned for PS4, Xbox One, Switch, and PC.