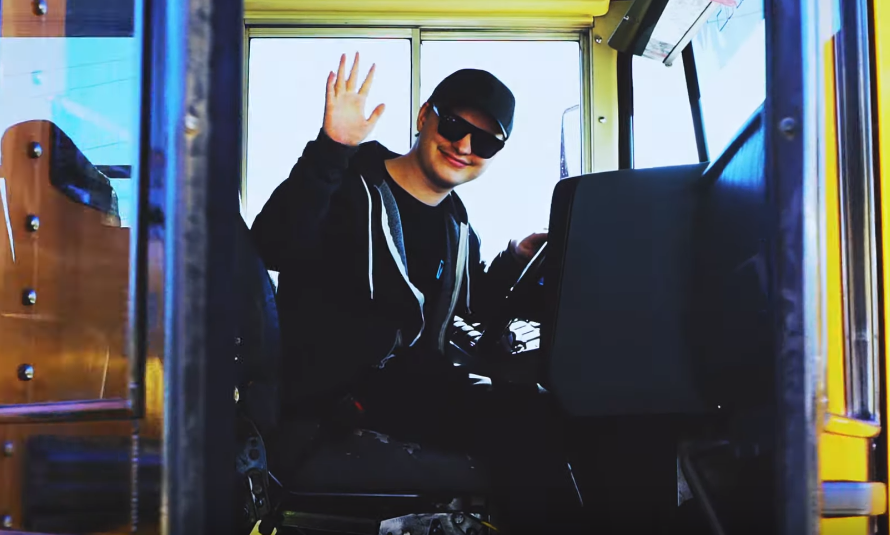 Esports professionals get to play video games for a living, but a job’s a job. Many players pour countless gruelling hours into practice and preparation, not to mention actual matches and events. That’s why fans did a collective double take when, during season one of Overwatch League, rumours began to circulate that a Florida Mayhem player was moonlighting as his own team’s bus driver.

Nearly from the get-go, there were rumours of weirdness and budgetary troubles behind the scenes of Florida’s stripped-down operation. The team began the season short-staffed in terms of players and coaches, among other issues.

But the ludicrous-sounding idea that DPS player Kevyn “Tviq” Lindström was driving the bus from the team’s house in one part of Southern California to the Blizzard Arena in Burbank, California, rocketed to the top of the list after a January 2018 episode of the High Noon Podcast with OWL commentator Mitch “Uber” Leslie as a guest.

“They need more coaching staff,” said Leslie while discussing Florida’s early-season woes. “They also need someone so that Tviq doesn’t have to drive the team bus for an hour every day. They have no support! This is actually real life. These guys live, like, an hour away [from the Blizzard Arena]. [They’re] tighter than a fish’s butthole when it comes to money…He’s driving the team to work.”

At the time, the show’s hosts laughed about it, then moved on to the next topic. OWL fans, however, did not move on, because on the internet, gossip never dies. They took this as yet another grim sign that Florida Mayhem was being gravely mismanaged, and they decided to express their discontent in the traditional way of esports fans: By turning Tviq’s alleged driving escapades into a meme.

This manifested in everything from joke responses to Florida Mayhem tweets to impassioned pleas for Mayhem parent company Misfits to be booted from the league and replaced with a different organisation.

But was this information accurate? At the time, some fans wrote it off as an infinitely meme-able tall tale, while others took it as gospel—proof that something was amiss as Florida racked up losses en route to a dismal season of seven wins and 33 losses.

Over the course of the season, Florida tried to right the ship by changing up their infrastructure and roster and moving their base of operations, but the bus memes persisted. In March of 2018, midway through the season, then -Florida Mayhem player Sebastian “Zebbosai” Olsson even tweeted his own joke in reference to the meme: A video of Tviq making driving motions while sitting in a chair that had been removed from a vehicle.

In January of last year, I reached out to both Florida Mayhem PR and Tviq himself to ask if Tviq was, in fact, driving the bus. I did not hear back. It wasn’t until Florida Mayhem’s new president, John Kracum, did a Reddit AMA early this year that the wheels on the bus went round and round in a direction sort of resembling a straight answer.

This occurred, in part, because people wouldn’t stop making bus driver jokes in the AMA, which forced Kracum to acknowledge the issue.

“Super funny to me that the top comment is a bus driver joke,” he said. “It was an embarrassing issue we created last season and we’ve deserved to be roasted for it, but I’m still surprised at how well that label has stuck to Tviq. I definitely feel like Principal Skinner in that clip about the children being wrong.”

What happened, though? What did they deserve to be roasted for? At an Overwatch League season two preview event a few weeks ago, I decided to ask the Florida Mayhem players and staff in attendance. There, the bus plot thickened.

“I think it was definitely blown out of proportion a lot,” said head coach Vytis “Mineral” Lasaitis when I asked him about all the bus talk. I then asked him to clarify what, exactly, “it” was.

“It was a picture taken of him driving the car once, and then everyone said, ‘Oh, he’s the bus driver,’” Mineral replied. “And you know how if a meme starts, everyone just runs with it. We had a driver. Someone was driving us. It’s just something that fans latch onto, and it becomes a permanent thing that never goes away.”

He also said he believed that team staff had previously issued similar denials online, but I was unable to locate them.

DPS player Damon “Apply” Conti concurred with Mineral. “Tviq wasn’t our bus driver,” he said. “I wasn’t on the team during season one, but I’m really good friends with Tviq.”

That left me scratching my head. If nothing happened, why did Kracum imply that his team had made a mistake in the AMA? I then reached out to Mayhem PR again. No reply. Then I DMed Kracum himself, who declined to comment, but pointed me in the direction of a different Mayhem PR person. This week, I emailed that person, and finally, I was told where this all began.

“So a bit of background for you,” wrote a Florida Mayhem rep. “We have a minivan we use to take the team around LA. Last season when the team were using the practice space at the Blizzard studio, there were occasions when Kevin [Tviq] would drive his teammates. This was mentioned on a community podcast and from there, spiraled into a meme.”

So Tviq did, in fact, drive his team occasionally, albeit in a van rather than a bus. That’s not a great look for a professional sports organisation no matter how you slice it. It’s no wonder, then, that Florida was reluctant to talk about it until fans (and journalists) annoyed an answer out of them.

This season, Florida has done an about-face and adopted the meme as part of its official promotional materials. Last month, the team introduced its almost-entirely overhauled season two roster with a video titled “FL Mayhem 2019 Roster Intro Ft. Tviq The Bus Driver.”

In it, a bright yellow school bus arrives to pick up the team’s new members, whom the video then highlights one by one. Midway through, the bus’ doors open to reveal Tviq as the bus driver. Shenanigans (some of which involve a Ferrari) ensue.

It’s a bold turn from a team that seemed rightfully ashamed of the whole driver thing not so long ago. “Coming into the 2019 season, we wanted to have some fun, so we leaned into it by hiring a school bus for him to drive in our team announcement video,” the Florida Mayhem rep explained to Kotaku.

So far, Florida Mayhem’s improved roster and sense of humour have yielded mixed results. They’ve only won one of four games this season — a wild upset against season one finalists the Philadelphia Fusion. But then, no other team can claim a small legion of people dedicated to making hyper-specific bus jokes about them, so perhaps Florida is the real winner here after all.