Is Super Ultrawide Too Wide?

If you thought gaming on a normal, 21:9 ultrawide monitor was ridiculous, wait until you get a load of a 32:9 superwide.

Viotek’s SUW49C is a 48 inch curved “super” ultrawide display, capable of playing many games at 3840 by 1080 resolution. Too much?

Just when I thought my IKEA office desk was long enough, along comes this monster. I’ve long been a fan of ultrawide monitors.

Given a choice between a higher resolution, 4K display and a lower resolution ultrawide with a nice refresh rate, I’ll pick the ultrawide every time. I’d rather have more screen real estate without taxing my video card too terribly than try to push four times the pixels of standard HD. When Viotek offered me a chance to play with the even longer than ultrawide SUW49C, I jumped at the chance. 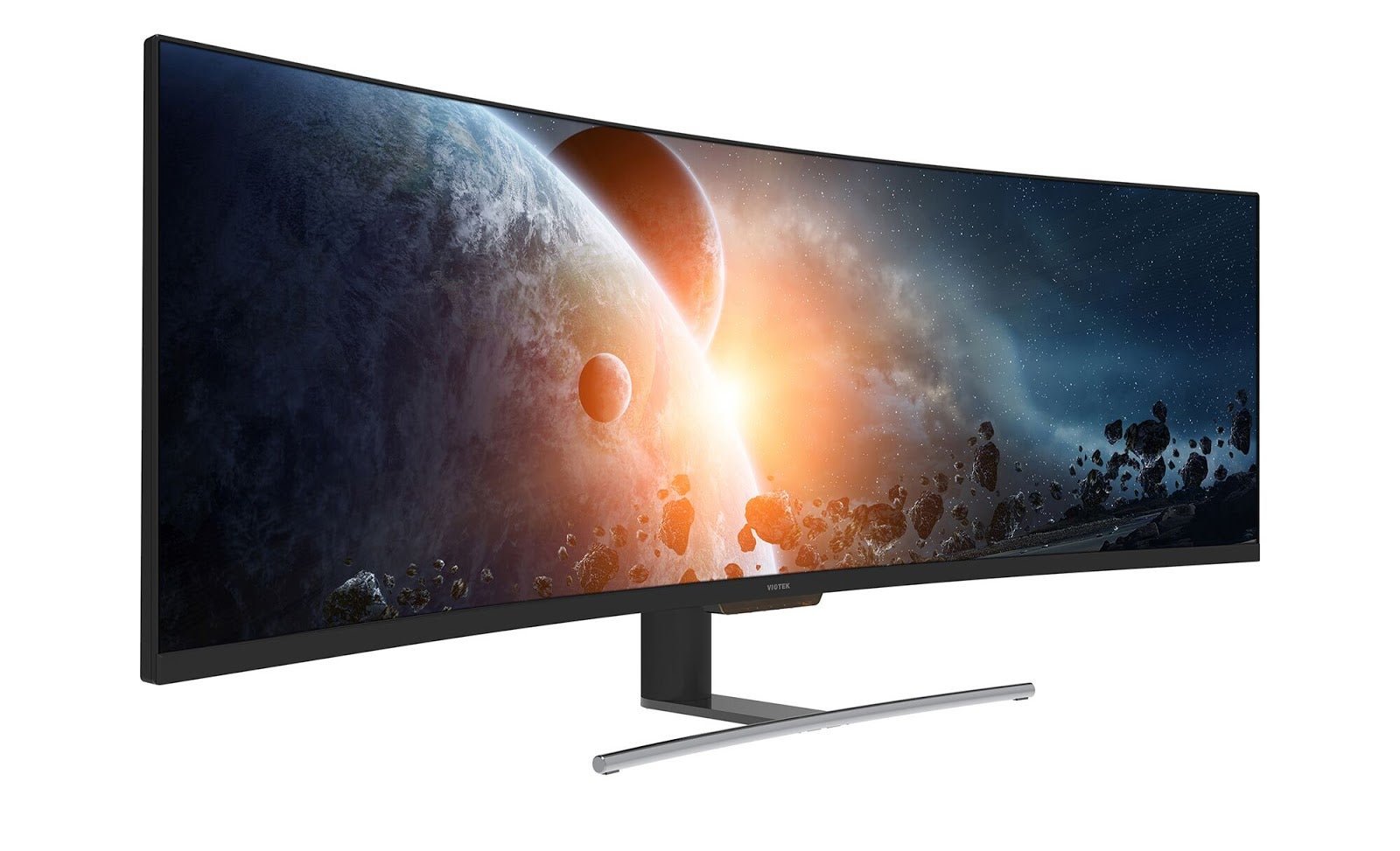 The SUW49C is essentially two 1920 by 1080 monitors squished together. A lot of people use two monitors while working and playing. This is that, only without the bezels and with a pleasant, 1800R curve.

It takes up a lot of desk space, being 46 inch across. Though it looks mighty imposing, it’s still smaller than two identical monitors would be.

It’s not 4K, but it’s got all the other bells and whistles folks look for in a gaming monitor. It’s one of the first super ultrawide monitors to support HDR (high dynamic range), though the effect isn’t very pronounced. It boasts a 144hz refresh rate, though in order to achieve a 4ms response time, the lowest a VA panel can achieve, the refresh rate has to be dropped to 120hz in the monitor’s menu.

It has Gameplus crosshair functionality, which means it can throw up a hardware crosshair (red dot, plus sign) on the display to help with aiming. Plus it comes with a remote, which is great for folks in massive electric wheelchairs who can’t reach the back of the monitor.

Holy hell is this thing long. I’ve used two monitors side-by-side before, but this long, uninterrupted field of pixels is something else. Most applications or websites I visit during my daily rounds pop up squarely in the center of the display. Others try to stretch, often with hilarious results.

(I thought my banner was high enough resolution. I was wrong.)

Watching videos on the SUW49C, I run into the same problem as I do with standard ultrawide, only larger. Big black boxes on the side of the screen, because no one makes super ultrawide videos.

It’s the same with most video game cutscenes. Even when the game I am playing supports 3840 by 1080 resolution, pre-rendered cutscenes never do.

Black, boxy sides are a plague on ultra and super ultrawide monitors, but when those boxes go away, damn.

I was surprised by the number of games that support super ultrawide resolution out of the box. The Division 2 handles the extra space smartly, keeping UI elements on the center of the screen, outside of the periphery.

Other games, like my beloved Final Fantasy 14, look spectacular but might require some user interface tweaking before being playable. Considering the UI-heavy nature of massively multiplayer online role-playing games, once configured with the right mods, the extra screen space could be a godsend.

Speaking of MMOs, I was incredibly surprised to discover that one of my very first MMORPGs, 1999’s EverQuest, works perfectly at super ultrawide resolution. I’ve never seen the city of Freeport look like this. It’s kind of dizzying.

It’s odd when a game from two decades ago has better display support than one released earlier this year. For instance, here is Devil May Cry 5 running on the Viotek monitor.

Ugh, so unfortunate and frustrating. Such a pretty game, I just wanted to see more of it. Fortunately, Capcom’s latest seems to be an exception rather than the rule. Plus, the ultrawide and super ultrawide gaming community is pretty quick to fix developer oversights when possible.

Gaming in super ultrawide is mighty impressive and very immersive. Sometimes too immersive, as the extra stuff on the sides of the screen in say, a competitive shooter, can be more distracting than helpful. But I don’t play many competitive shooters. Just cooperative ones, with other players to pick up the slack if I get distracted by the scenery.

There’s also the SUW49C’s hidden talent: It’s got one DisplayPort port, three HDMI and a DVI port. Plug any two sources into those, say your PC and an Xbox One X, and you can run them side-by-side on the same monitor. It’s a beautiful thing. 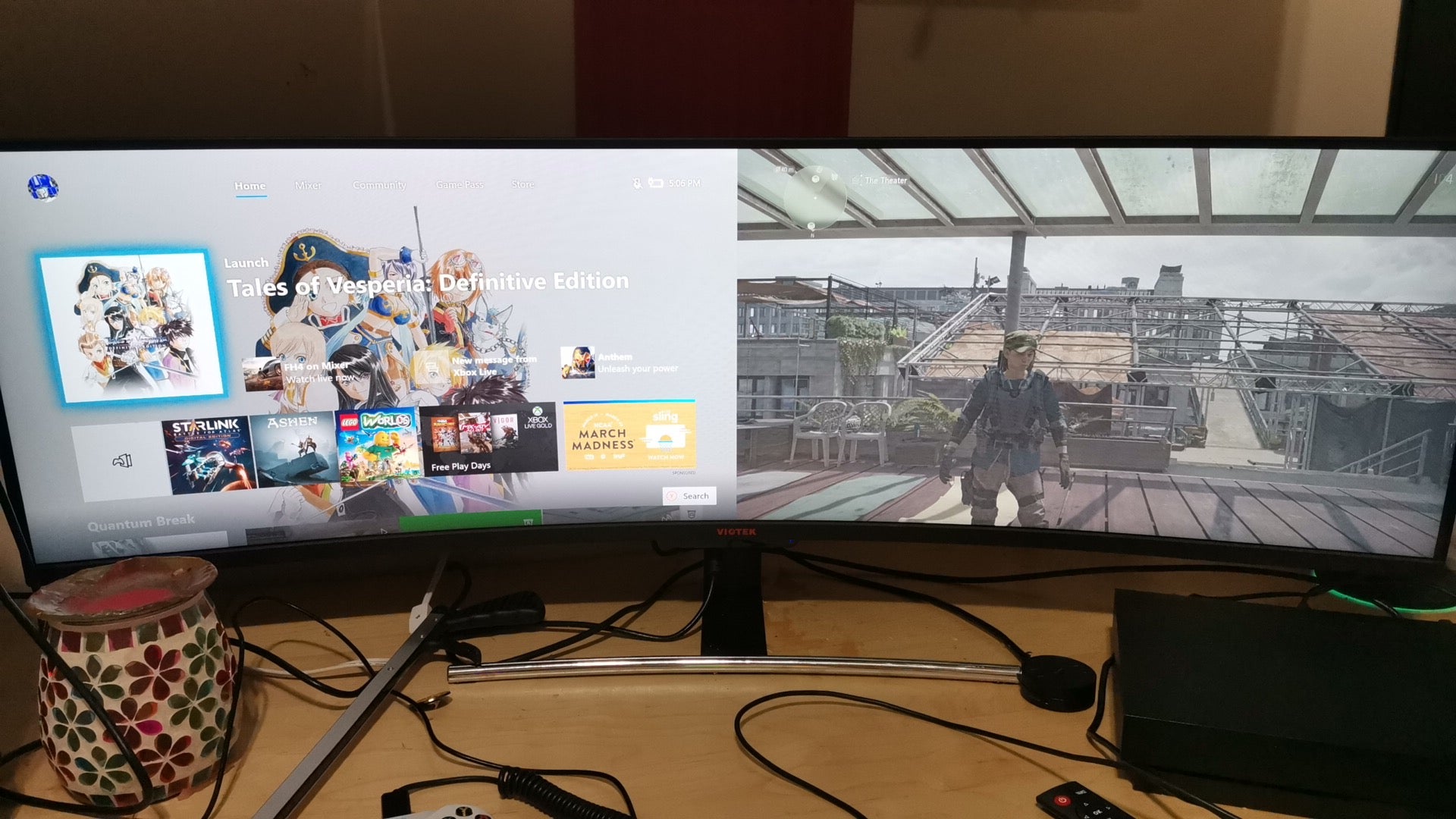 For some, super ultrawide might be too wide. It’s a lot to take in and takes up a lot of space. Someone who likes to sit up close to their computer monitor might want to stay away, lest they risk neck strain from constantly turning their head.

But me, I embrace this ridiculously long monitor. Super ultrawide is grand and glorious, and Viotek’s SUW49C is one of the most accessible, least expensive means of achieving it.