earth defense forceearth defense force iron rainedfsandlotspidersyuke's
To sign up for our daily newsletter covering the latest news, features and reviews, head HERE. For a running feed of all our stories, follow us on Twitter HERE. Or you can bookmark the Kotaku Australia homepage to visit whenever you need a news fix.

Since I’m a longtime fan of the series, in-depth character creation was the last thing I expected when I started up Earth Defence Force: Iron Rain, releasing on April 11 for the PlayStation 4. Until now, Earth Defence Force games have stuck to the same formula. The player is a soldier of some sort, covered in armour that you may or may not be able to lightly customise. In-game characters refer to the player as “rookie” or “newbie” or “soldier”.

Missions consist of destroying massive waves of giant insects, alien creatures, spaceships, and other B-movie fare. Weapon and health crates drop by the dozens. It’s so stupid, but so good. 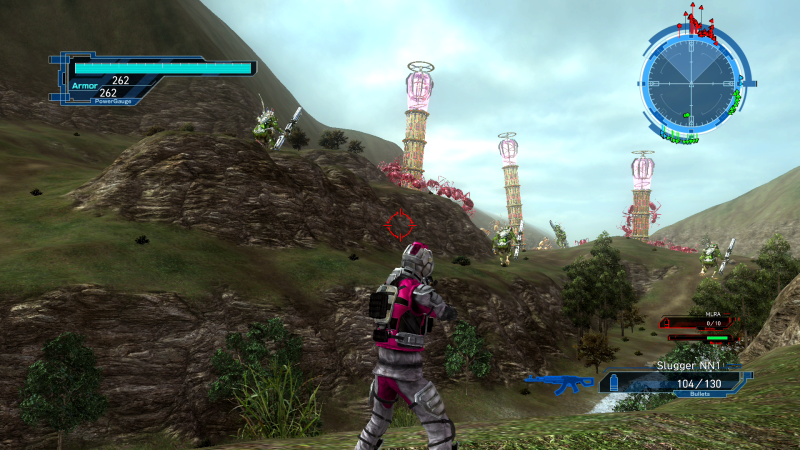 Iron Rain is a very different Earth Defence Force game. Developed by Yuke’s instead of series creator Sandlot, it’s a more serious take on humanity versus giant insects. On this version of Earth, the EDF is nearly wiped out until a soldier known as “Closer” manages to single-handedly take down a hive ship. Seven years later, Closer wakes up in a world where the EDF operates on a shoestring budget and the aliens’ sinister plans for humanity are coming to fruition. Closer is the playable character here, in case that wasn’t clear. Say hello to Closer. 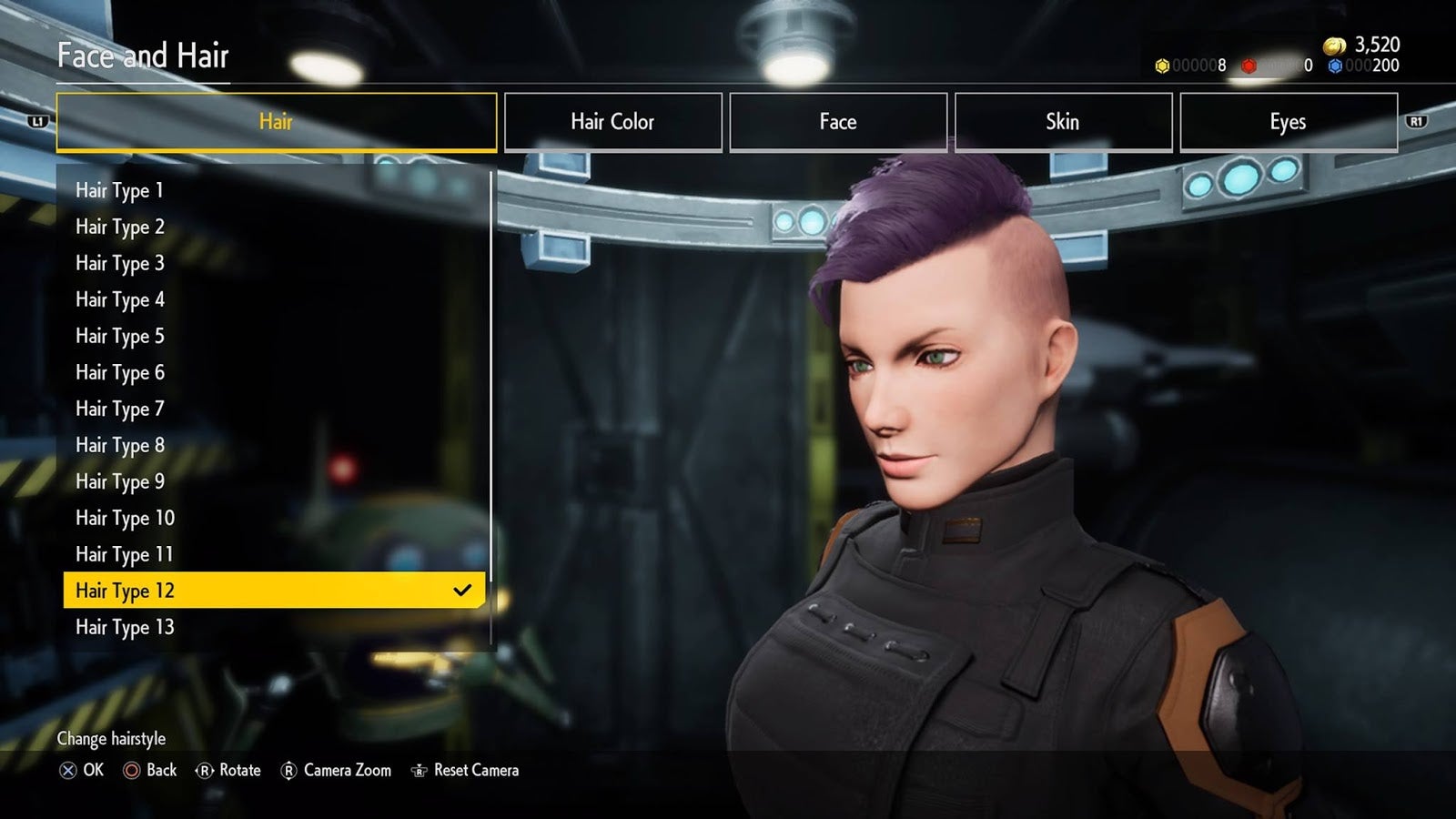 Or at least, my Closer. Iron Rain’s character customisation is the most robust the series’ has ever seen. Players can select from sex, body type, face type, hair, skin, eye colour, and facial hair. There are multiple outfits and accessories to choose from, each coming in a variety of colours, and you can unlock more as the game progresses.

There are also no gender-specific hairstyles or outfits, which allows for some great combinations. 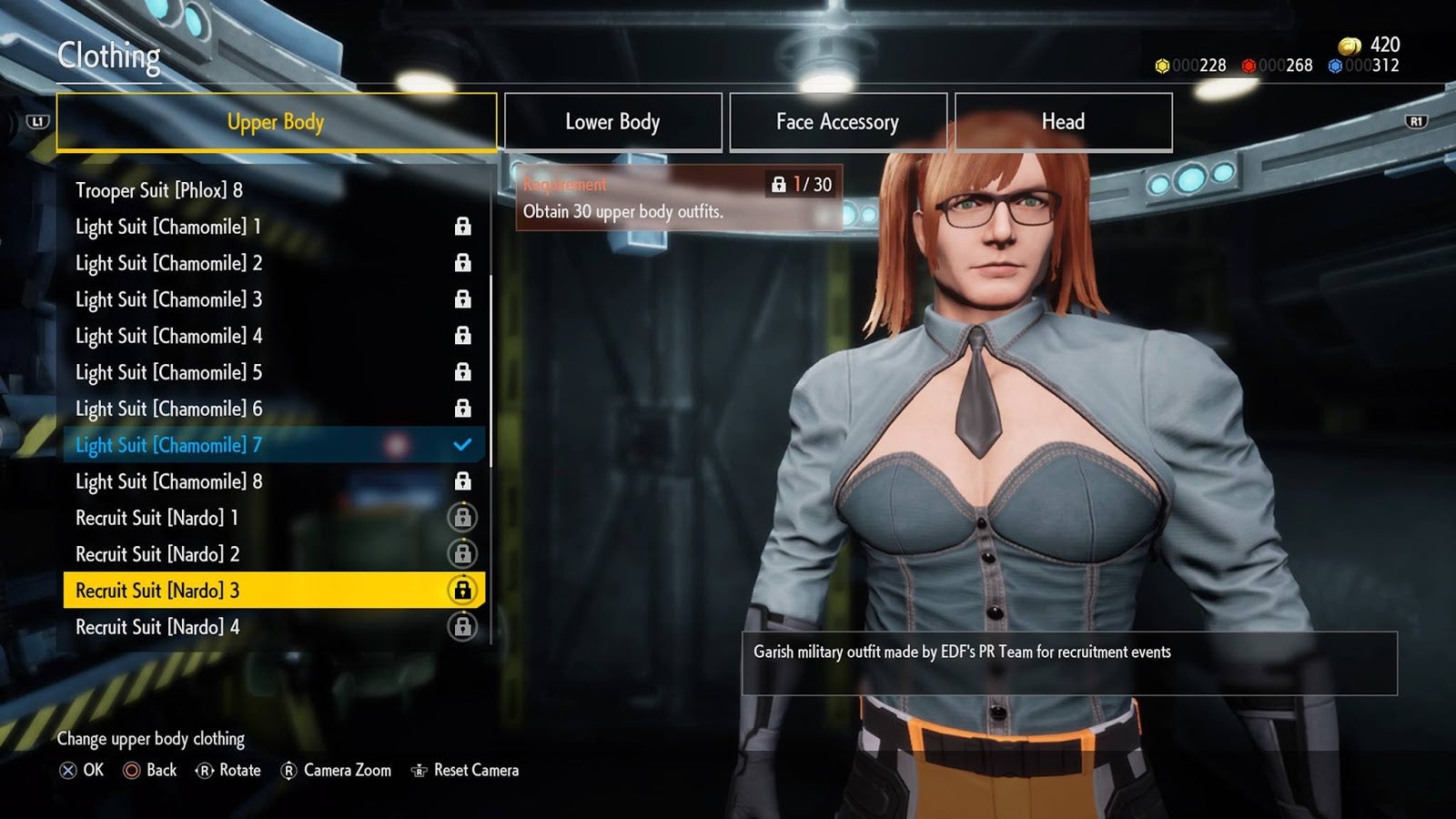 The customisation extends to the game’s “PA Gear”, the powered-armour harnesses soldiers wear into battle. The mechanical marvels can be coloured to player preference and decorated with emblems for an added dash of personalisation. 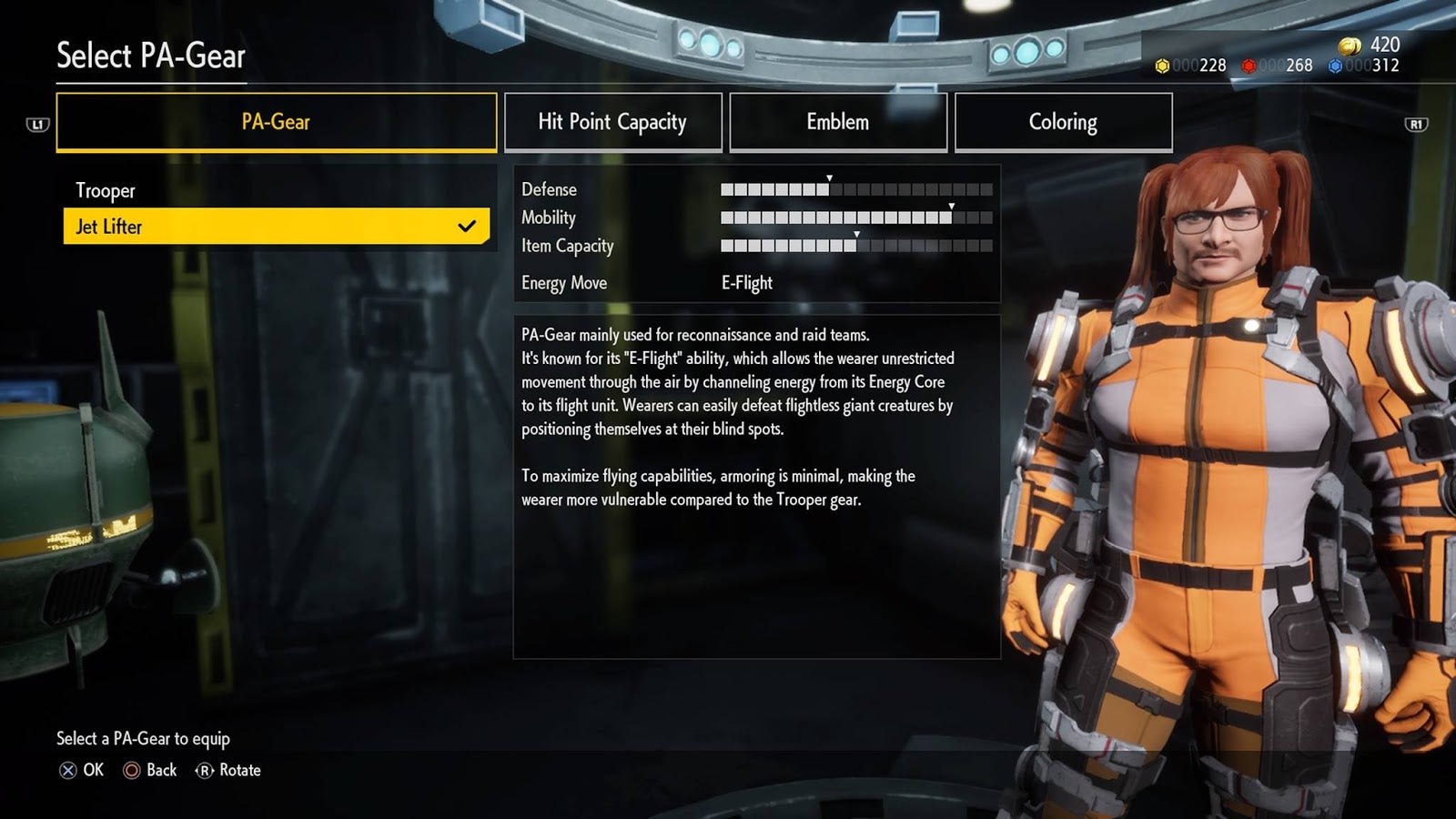 The result of all this customisation is an Earth Defence Force character that feels like an extension of myself. This is no generic soldier. This is a strong, fierce woman who certainly has some sort of backstory regarding her mohawk. Are her glasses real or decorative? It’s all up to me. 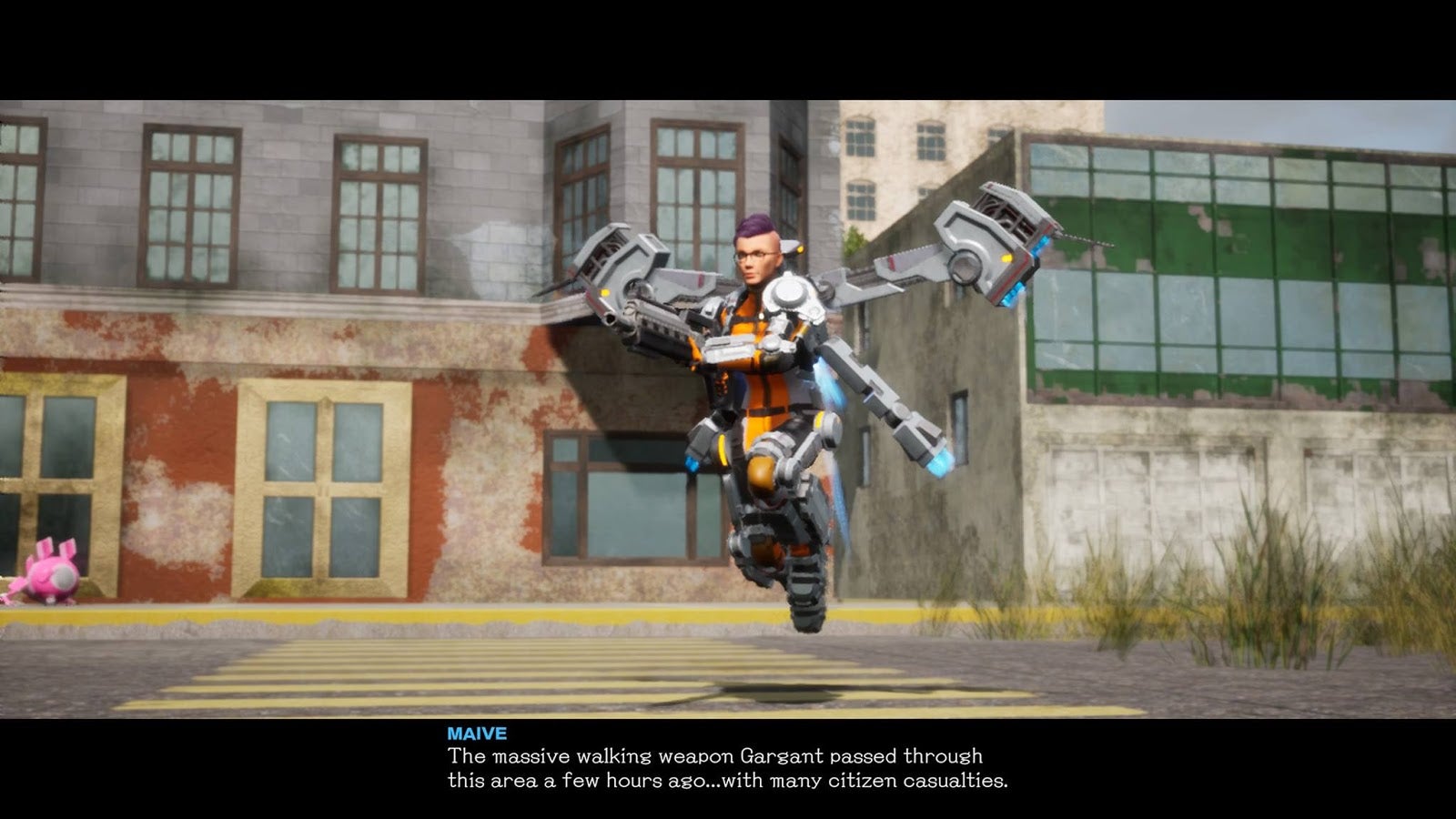 It creates a bit of a personal problem. I do appreciate the effort Yuke’s put into character creation. I enjoy clever costume unlocks, like the eye patch I gained access to after losing a particularly tough mission, suggesting my character was grievously wounded. It’s all a great use of Unreal Engine 4. Thing is, I kind of prefer being generic, at least in these circumstances.

Look, I don’t like bugs. Ants, beetles, spiders — it is a well-documented fact that they give me both the heebies and the jeebies. Earth Defence Force has been fine up until now, because A) they never refer to the giant insects as actual insects and B) my character has always been just some guy or girl with no distinguishing features. Now I have a face. Now it’s personal. Instead of “Haha, look at that guy get eaten by ants,” it’s “Oh god, I am being eaten by ants.” I do not love it.

And to make things worse, on this game’s Earth, they DO call them giant bugs and spiders. How am I supposed to deal with this shit right here? 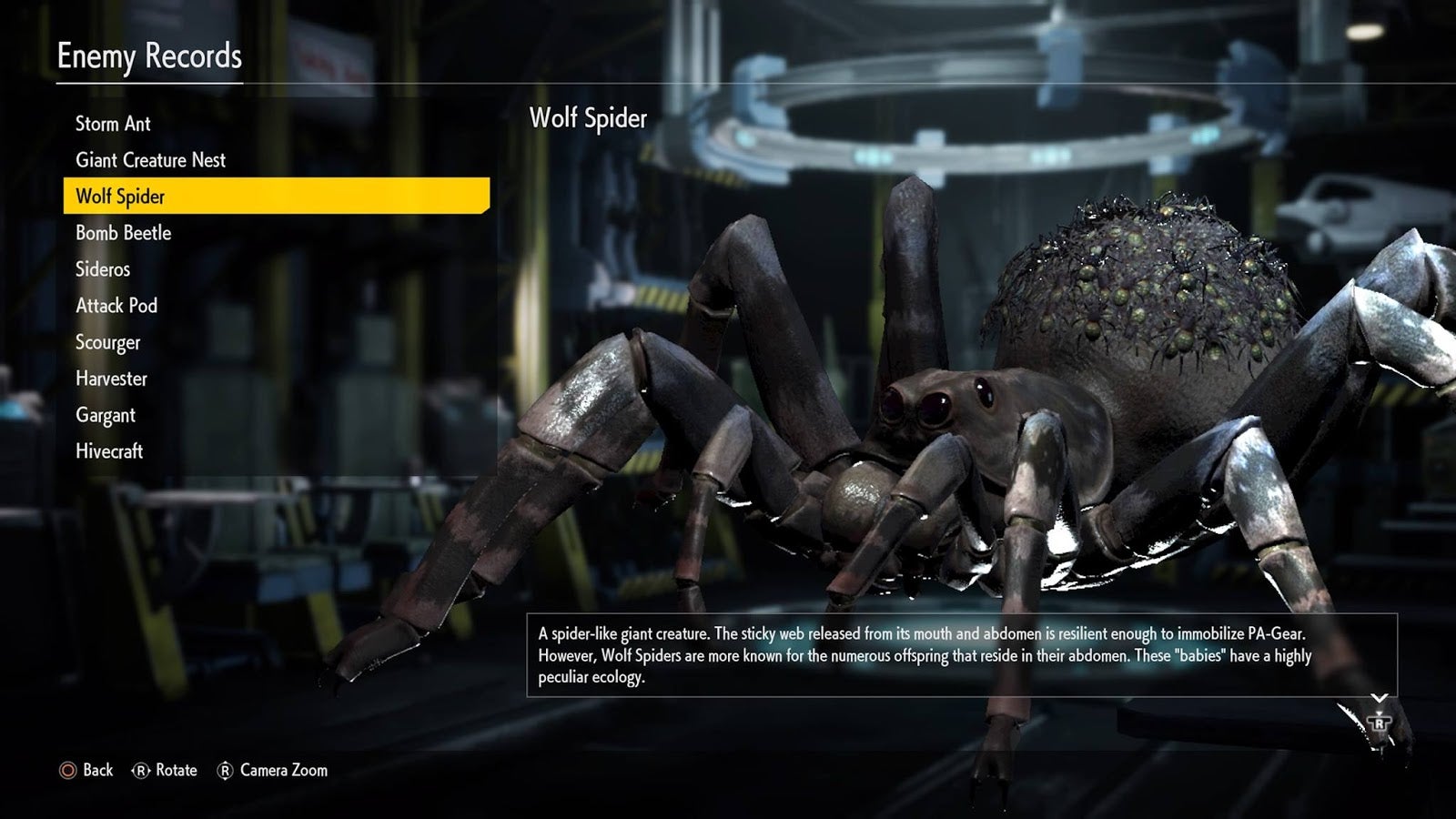 It’s covered with babies, and they jump off and attack. Not fine.

Curl up in a corner and die, you say? Good plan. BRB.