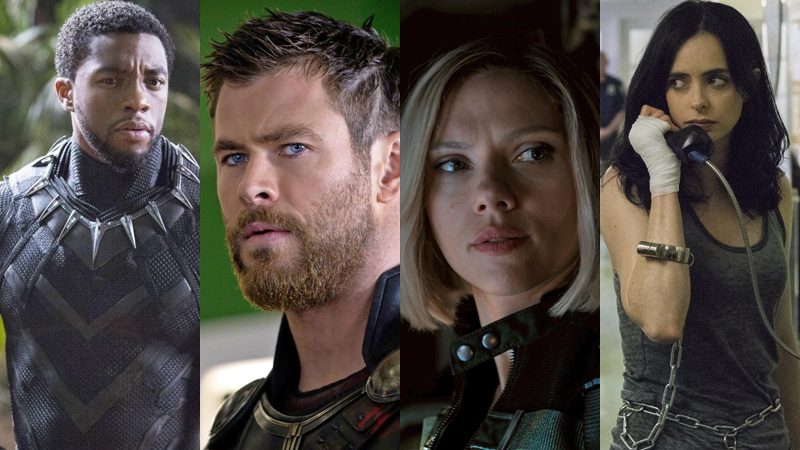 T’Challa, Thor, Nat, and Jess are getting a quartet of new adventures. (Photo: Marvel Studios)
To sign up for our daily newsletter covering the latest news, features and reviews, head HERE. For a running feed of all our stories, follow us on Twitter HERE. Or you can bookmark the Kotaku Australia homepage to visit whenever you need a news fix.

Well, comics themselves are already a form of serialized storytelling, so while the format isn’t exactly new to these characters, this just-announced project is pretty intriguing.

This morning Marvel revealed a new partnership with Serial Box to bring a line of weekly episodic stories in both digital book and audiobook formats to its service. So far, as Deadline notes, four characters — Black Panther, Thor, Black Widow, and Jessica Jones — will be receiving series on the service, which offers “seasons” of about a dozen episodes, telling a larger story across roughly 30-minute chunks designed to be read on your commute to work. Or anywhere else you’ve got 30 minutes to an hour to get your Marvel stories in!

Each series will be helmed by its own writers’ room of talent—so far only the Thor team, including Mandy co-writer Aaron Stewart as well as Brian Keene, Jay Edidin, and Yoon Ha Lee, has been announced—but the line at large will be overseen by writer Alex de Campi, who pitches the lines as a good entry point for Marvel film fans who want to see these characters in formats beyond film or TV:

I’m editing / showrunning this line. The Thor and Black Widow story bibles are done and they are MIND-BLOWING. The books are meant to be an accessible first step into the Marvel comics / publishing universe for fans of the films. (And our writing teams are TO DIE FOR) https://t.co/Hy9D9LRbU8

It’s a great move as an avenue to bring Marvel live-action fans aboard to experience stories with these characters in a new medium—one that at the very least is a little simpler to navigate toward than the occasionally impenetrable task of trying to get into comic books for the first time. Movie and TV fans get a new way to experience their favourite Marvel stars, while diehards get a new story in an interesting format to look forward to every week. Win-win!

Serial Box’s line of Marvel stories is set to launch this summer. Although pricing details have not been confirmed, typically a Serial Box season runs at around $2 an episode, with $25 “season passes” letting you pre-order an entire run in advance.