The Sega Genesis has had by far the longest shelf life of any of the 16-bit systems. You could buy Sega’s final “Genesis 3″ model in stores until the early 2000s, and just a few years later, the AtGames released licensed plug-and-play machines, some with Genesis cartridge slots. For the last 30 years, you’d likely be able to find a Genesis-compatible console on a store shelf. So do you need one that costs $190? Maybe you do.

The hardware maker Analogue has just released its latest high-end, high-definition, high-priced retro console, the Mega SG. Like its earlier NES- and SNES-compatible machines, the Mega SG is a cartridge-based, HDMI-enabled Sega Genesis clone that aims for nothing less than perfection, which means running games exactly as they would on the original, or as close to exact as is possible.

Its method for accomplishing this is the reason for its premium price tag and also is what makes the Mega SG different from nearly every other retro console on the market. Instead of a cheap computer running a software emulator, Analogue’s systems use a device called a “field-programmable gate array,” or FPGA.

This means that the Mega SG recreates the designs of the chips on the original Genesis board. It’s not a computer running an emulator that lets it interpret ROM files. For all intents and purposes, it is a Genesis. 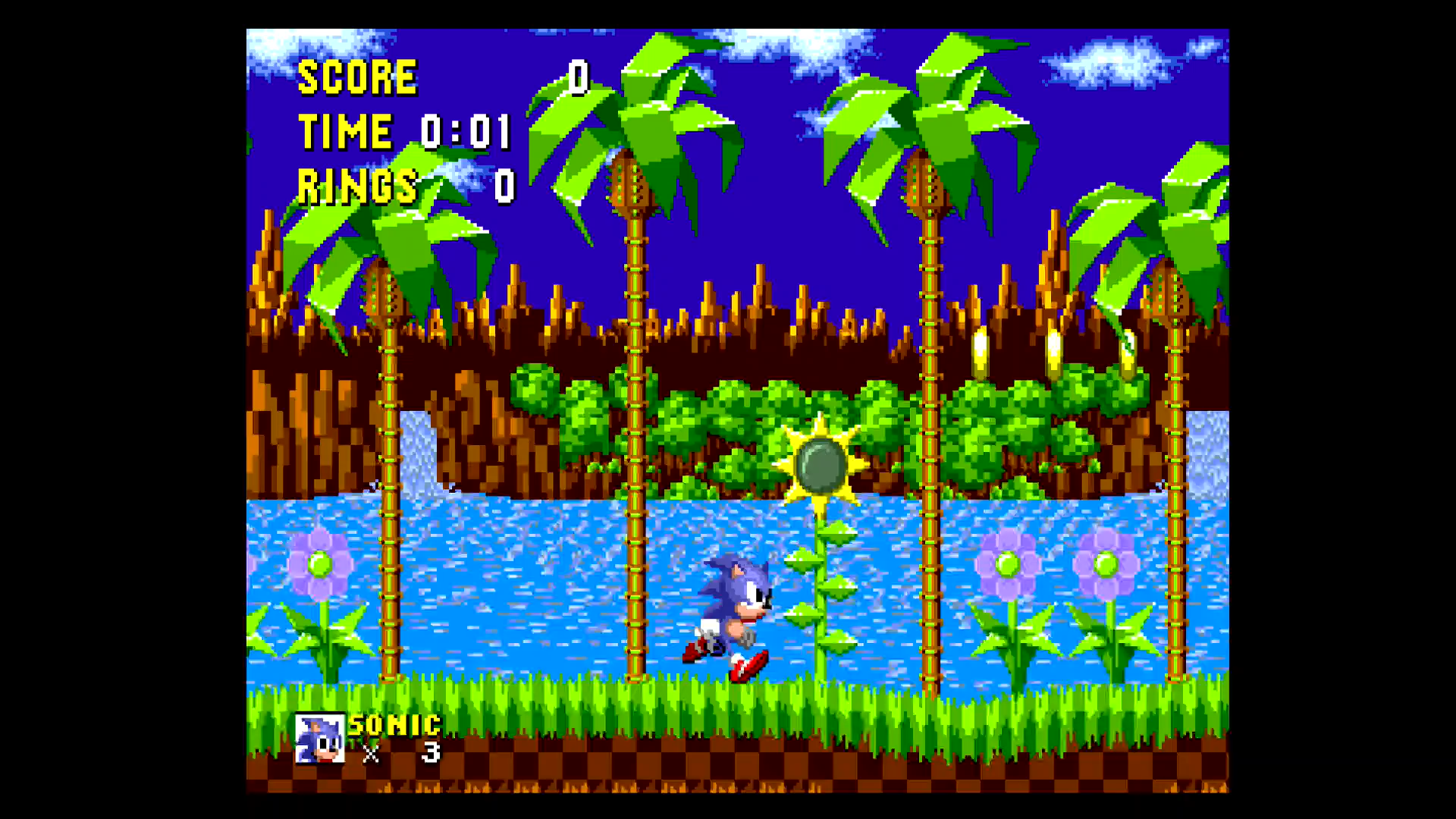 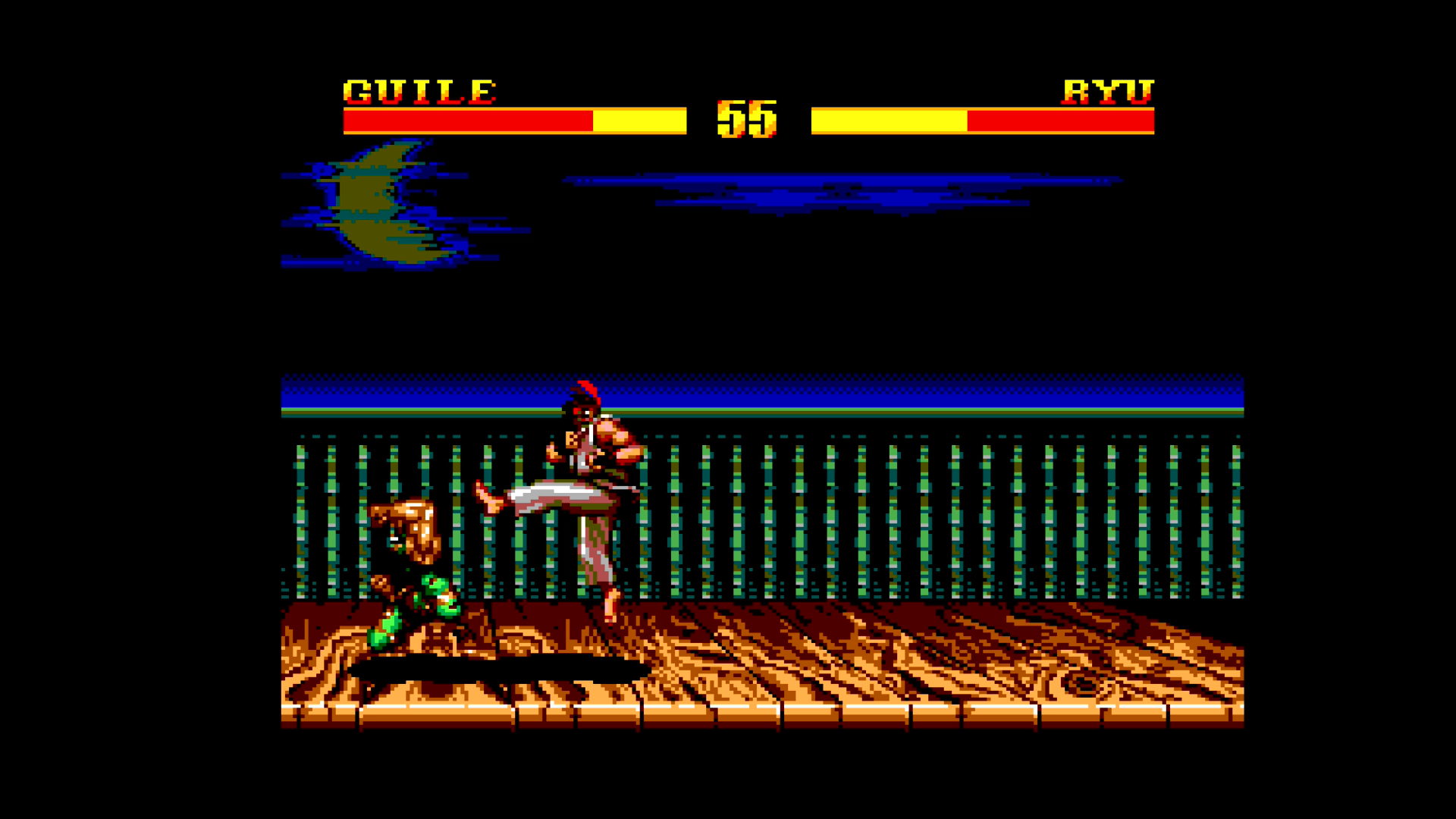 Brazilian version of Street Fighter 2 released in 1997, and the Mega SG handled them with aplomb. More adapters, to be sold for $10 each when they are released later this year, will let you plug in Master System cards, Game Gear games, and games from Sega’s Japanese SG-1000 and SG-3000 systems.

It was often the case that games I inserted didn’t work on the first try, giving me a glitchy error screen. In all cases, this meant that the cartridge had to be cleaned. I used a lot of Q-Tips and a lot of rubbing alcohol that day. The place smelled like I was giving out free flu shots. All of the Analogue devices are pretty fastidious about wanting the carts you put inside them to be clean as a whistle before they work, so keep that in mind. 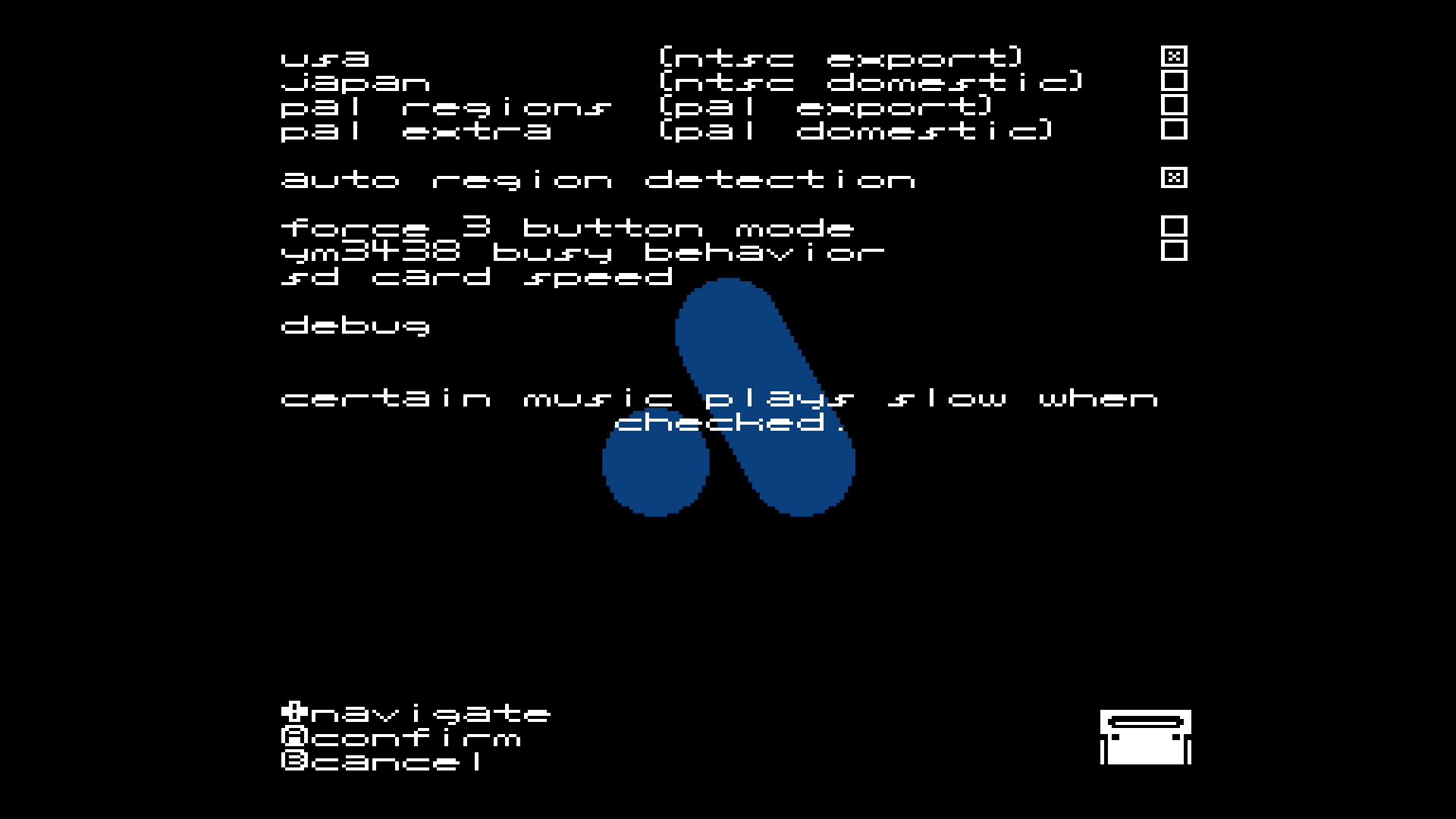 Just one of the Mega SG’s many, many options menu screens. (Screenshot: Kotaku)

Turn on the Mega SG and you’ll get a great-looking picture and sound, but if you want to tweak any of that stuff, you can dive into the panoply of different sliders and checkboxes in its menu to fully customise the experience. Want to turn on different shaders to smooth out the pixels, or customise the faux CRT filters until the image looks exactly like the Trinitrons of your youth? Go nuts. You can even select from different waveforms to use for the Genesis’ FM sound output, which will change the timbre of the music.

There are some limitations. While you can hook up a Sega CD to the unit, you can’t use that other Genesis add-on, the 32X. The reason for this is that the 32X uses analogue video mixing, and the Mega SG only supports HDMI. That’s also something to bear in mind if you were considering hooking this up to an analogue television set, because out of the box, you can’t. You also can’t use light guns, but that’s because vintage light guns don’t work with HDTVs. So, abandon those dreams of breaking out your old Sega Menacer. 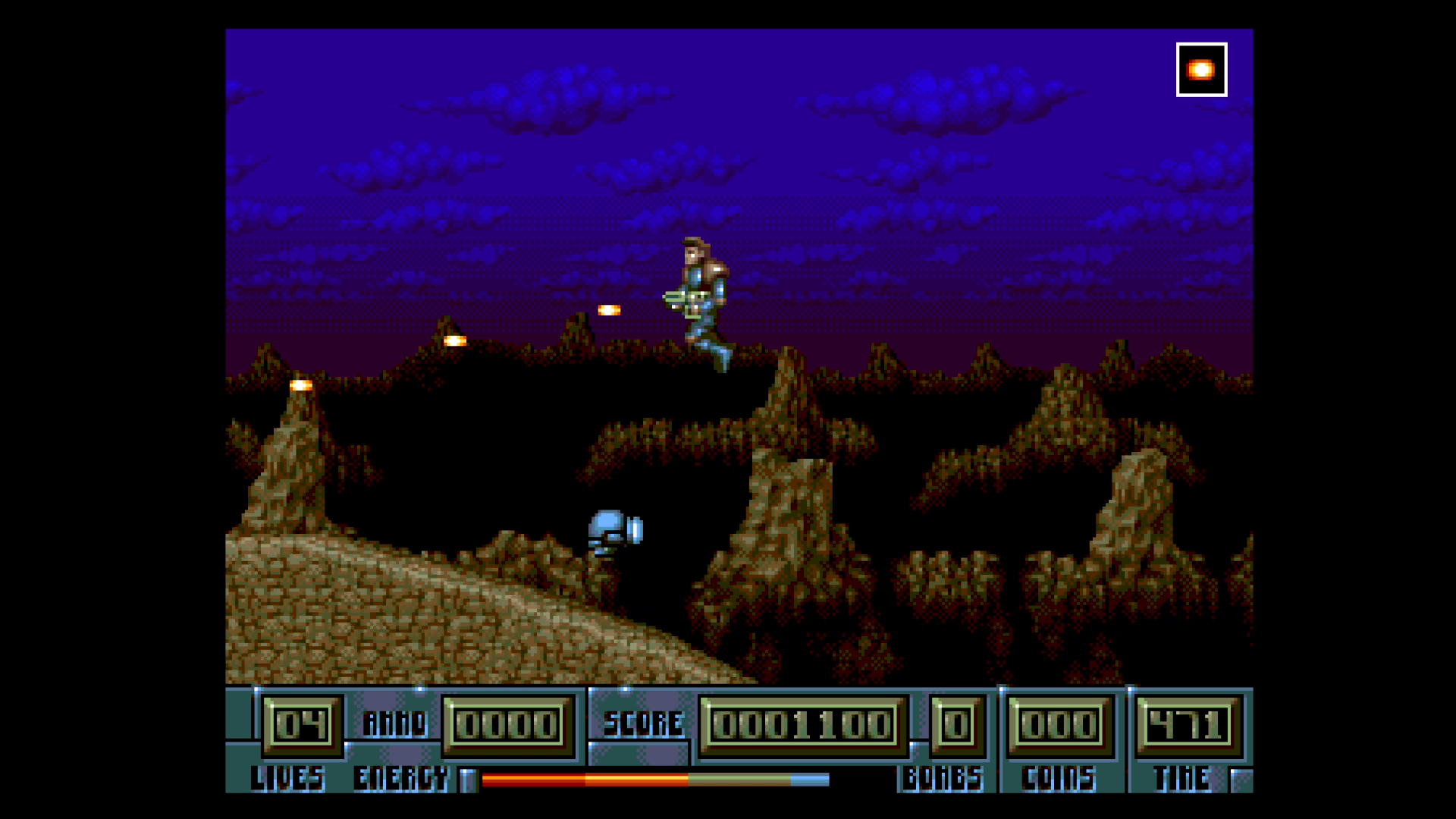 Everdrive flash cart for the Genesis, that’ll work just fine, too. That said, Analogue’s previous machines have gotten unofficial “jailbreak” firmware very shortly after their releases that allows you to dump cartridges and run ROMs, so it’s highly likely that you’ll be able to bust this open and do more with it soon enough. 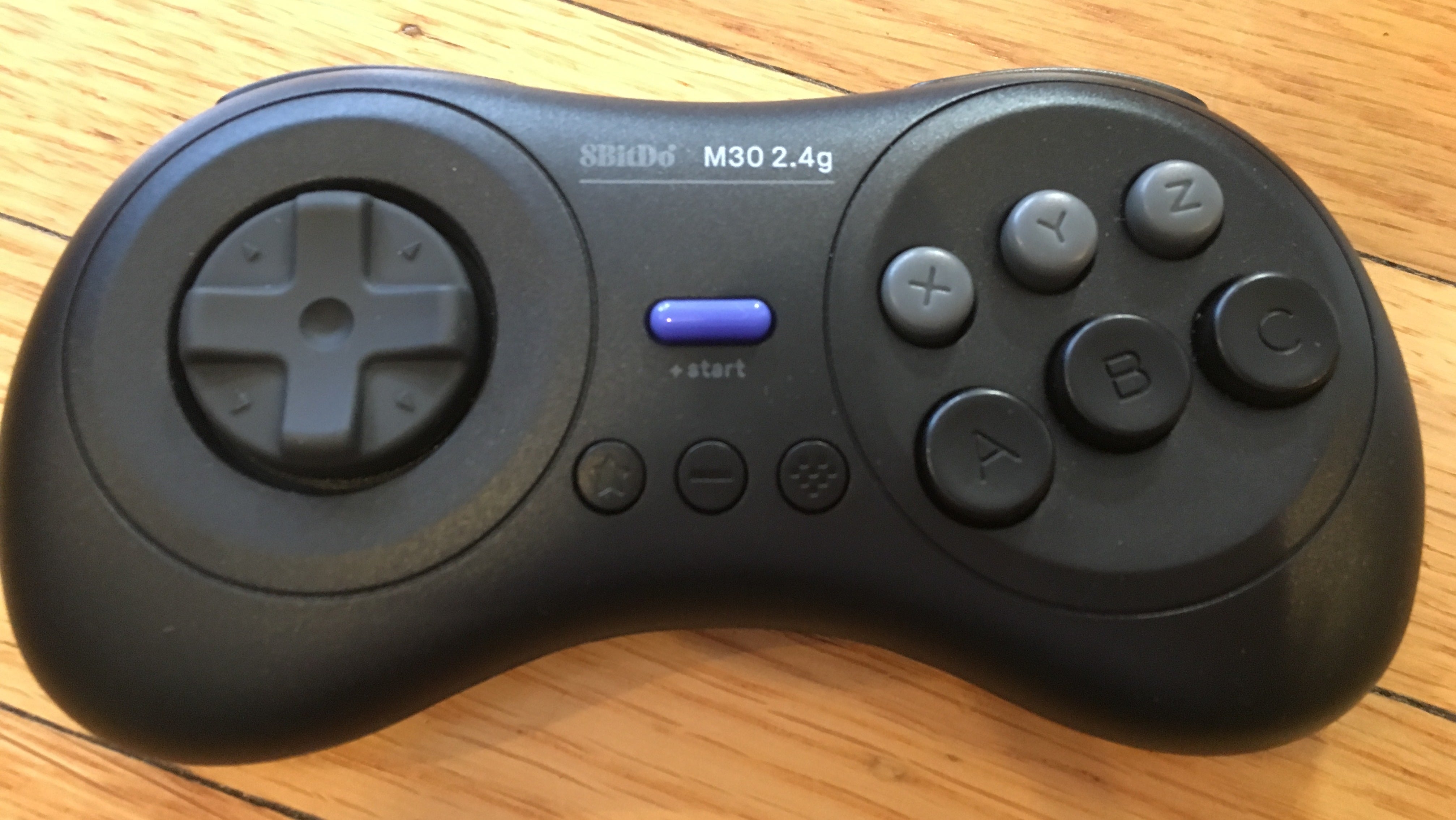 While the Mega SG includes the aforementioned Master System adaptor, an HDMI cable, and a USB power cable, it does not include a controller. You can use any Genesis-compatible pad, but if you want your controller to be as slick and fancy as your console, Analogue recommends you grab the 8Bitdo M30 wireless controller. (It sent one along with our review unit, and it’s quite nice.)

With all of my talk about FPGAs and hardware perfection, don’t think I believe that software emulation is bad, or inferior. It’s not! It’s a perfectly valid way of preserving and playing old games. It also costs zero dollars to get an emulator up and running on your existing device. From there, the more impressive options scale up in terms of price, complexity, and accuracy until you get to the Mega SG on the far opposite end of the scale. Yes, it’s for hardcore retrophiles, but it’s also such a beautiful, elegant solution that playing it might turn you into one.