Ray Tracing Is Coming To A Whole Lot Of GPUs

If you thought ray tracing was only going to be possible on Nvidia’s pricy line of Turing GPUs you would be wrong. Today the company has announced ray tracing support for a wide range of GPUs ranging from the Nvidia GTX 1060 all the way up to the super beefy Titan V. The 1060 can notably be found for as little as $259 and its price is expected to drop even further.

Which GPUs are getting ray tracing support?

Support for ray tracing will technically come to any Nvidia GPU that also supports DirectX Ray Tracing (more on that below), but Nvidia has found that often times the hit in performance is too severe for less powerful GPUs. Thus when the Nvidia driver ships next month it will support the:

Also, naturally, the 20-series GPUs will continue to support ray tracing, and the newly expanded support will also include mobile GPUs. So laptops made in the last few years should be able to handle some form of ray tracing starting in April. 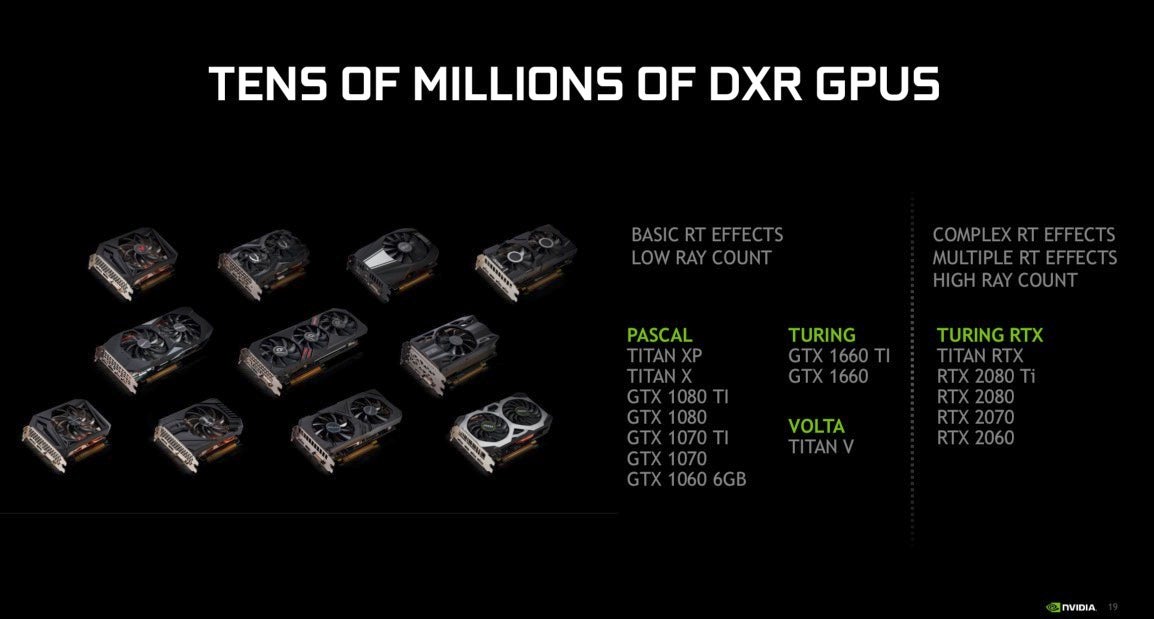 How is this possible?

So wait, how is this even possible right? Ray tracing is only supposed to be possible on Nvidia’s 20-series of GPUs! Those are GPUs based on the Turing architecture that start at $559 and go well past $1,800. They have lots of fancy components in them that other GPUs do not and Nvidia has spent more than six months preaching the gospel of Turing and the 20-series and how it will revolutionise the way our games look.

But now anyone with a 1060 6GB can get ray tracing? Yes. Yes, technically that is true. The only games that will support ray tracing on Nvidia’s wide range of GPUs are ones built using an extension of Microsoft’s DirectX 12, DirectX Ray Tracing (or DXR). Provided a game is built using DXR is will be able to do some element of ray tracing on the supported GPUs from Nvidia.

How well it will work is another story. In a press briefing ahead of today’s announcement Nvidia repeatedly stressed that the ray tracing performance would vary based on the PC and the type of ray tracing being done.

How good is the performance?

Tracing rays of light for reflections is a lot less taxing on a GPU than tracing every ray of light to create both shadows and reflections. Which means your GTX 1060 will have a lot less of a struggle handling ray tracing on Battlefield V than Metro Exodus. “It’s going to be very game dependent,” Nvidia told a group of reporters, including Gizmodo.

But how much of a struggle? That remains to be seen for some of the less powerful GPUs Nvidia ships. Nvidia only divulged numbers for the 1080Ti. DIn Battlefield V, a 1080Ti at 1,440p resolution supported ray tracing while churning out 50fps. In Metro Exodus it plummeted to under 20fps. Nvidia claims a 2080 at the same resolution did over 70fps in Battlefield V and over 60fps in Metro Exodus—a far sight better than the 1080Ti. So expect even less stellar performance from the 1070 or 1060.

Thankfully ray tracing is a setting that can be toggled just like hair effects, so if you don’t want your GPU to take the hit in performance for a few neat reflections on shiny cars you don’t have to.

What does this mean for the future of ray tracing?

You’ll notice only three games were cited above. That’s because ray tracing isn’t actually supported by many games right now—though many game developers have promised to include support in the future.

The fact is ray tracing is not something most game developers have really gone all in on yet. There are so few GPUs that actually support ray tracing it doesn’t make sense for them to devote a lot of resources to it. But adding ray tracing support to the bulk of GPUs in computers today is a different story….at least Nvidia is hoping it is.

The company claims that this new support wasn’t a reaction to the lacklustre sales of 20-series GPUs. “We’ve always had a vision of enabling it,” Walker said. The announcement appears to only be coming today because the Game Developer Conference will start in earnest tomorrow in San Francisco, and thousands of game developers will be descend on Moscone Center to learn figure out what the next generation of games will look like. With Nvidia hosting large ray tracing sessions every single day it is clear the company wants those developers to start seriously thinking about ray tracing.

Whether they will remains to be seen.

Know more about ray tracing and game developers’ burgeoning relationship with it? Email me at alex.cranz@gizmodo.com or hit us up securely via Secure Drop.