It feels like only yesterday that the fighting game community watched surprise South Korean competitor Hyeon-ho “Rangchu” Jeong crowned global Tekken 7 champion in Amsterdam. It wasn’t, obviously, but it was only three months ago, and the folks behind the Tekken World Tour already have new details to share about what competitors can expect from the circuit in 2019, the full breadth of which were announced today.

Those details include a way bigger prize pool, more love for grassroots tournaments, and a big first for the World Tour event schedule: the inclusion of an African event in the lineup.

Let’s break it down. The Tekken World Tour is the official destination for Tekken 7 competition, hosted by developer Bandai Namco Entertainment and the competitive gaming wing of live-streaming platform Twitch. In 2017, it evolved into its current state from its predecessor, the King of The Iron Fist Tournament series; its changes were similar to the ones made to Capcom’s Street Fighter V circuit, the Capcom Pro Tour, in 2014.

By visiting a list of partnered, grassroots events throughout the year and performing well, Tekken players earn points towards qualifying for the finals, which in 2019 will take place in Bangkok, Thailand.

This year, the Tekken World Tour will establish two more levels of competition in terms of how it classifies its events: Master+ and Dojo. The former is occupied solely by the Evolution Championship Series, which is regarded by many as the most prestigious fighting game tournament of the year and will thus provide the most points for qualification purposes, while the latter should, on paper, help extend the circuit’s reach into more regional and local events.

Competitions that are not already part of the Tekken World Tour will be able to apply for official Dojo recognition, giving them the ability to award varying amounts of points depending on how many players are in attendance.

At best, Dojo events will sit just below the existing Challenger tier with regard to the points they can offer high-placing competitors, but even at the lowest level, these events should act as a way for players unable to travel year-round to earn a smattering of complementary points. 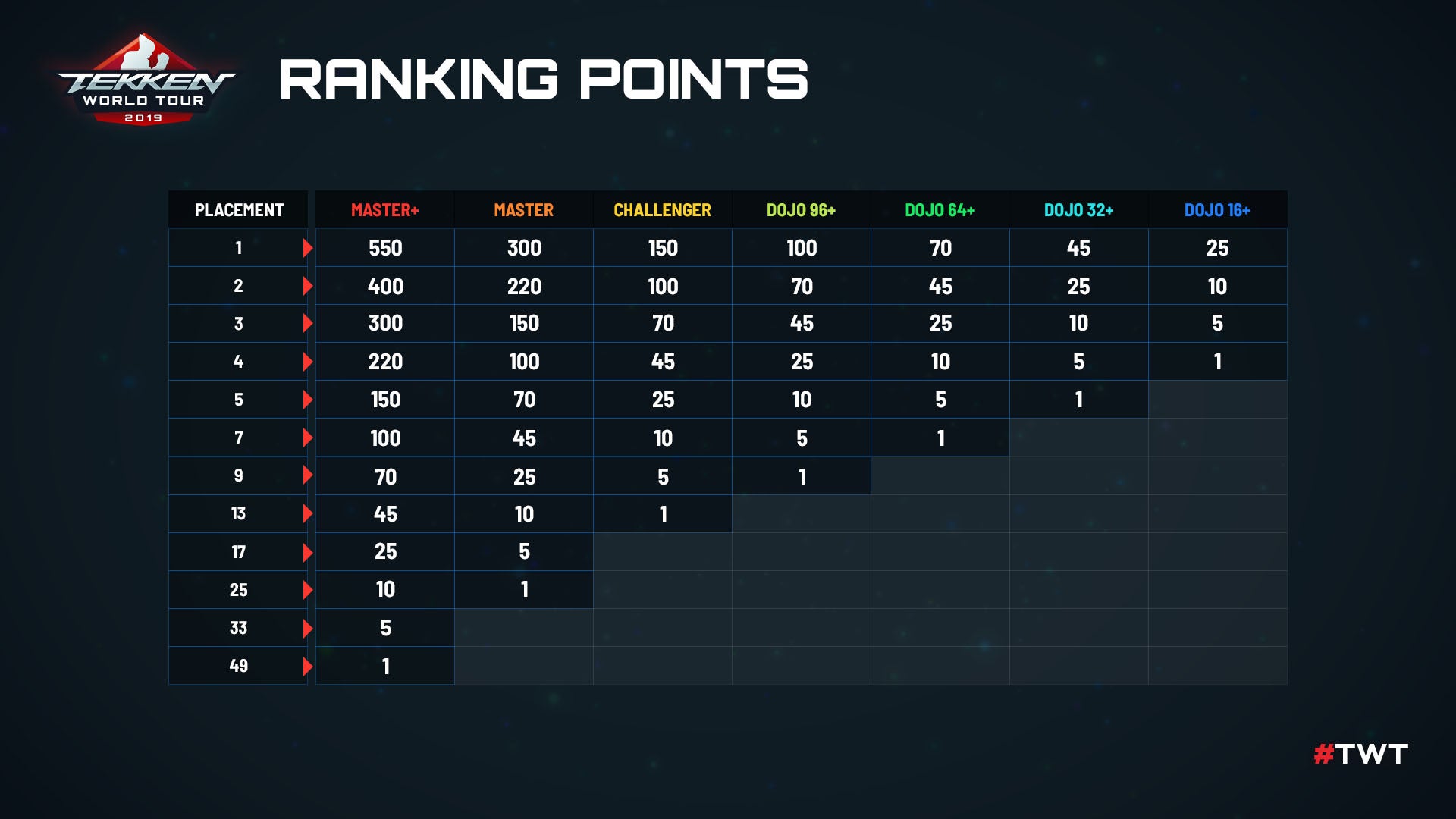 This also means that qualifying for the finals won’t just be a matter of how many tournaments a player can afford to visit, opening the door to the championship just a smidge wider for folks of lesser means or from more remote regions who may not have the privilege of travelling on a sponsor’s dime.

This has been a sticking point for many competitors in the Tekken scene, and after watching Rangchu earn a sum they felt was inadequate for someone who had just become world champion, some even said they didn’t see a future in pursuing Tekken competition as a career if payouts remained at the level they were in 2018.

“The ability for Tekken 7 to inspire world-class competition without significant monetary incentives says a lot about the game’s quality and the community’s hunger to compete,” Thiher told Kotaku. “With that acknowledged, it is great to see the Tekken World Tour adjust prizing with the growing fandom. I hope the prizing continues to scale over time.”

While many developers have established official circuits within the last few years, they often don’t do much to earn the “world tour” distinction they promote. They rarely provide the same support for regions like South America, Europe, or the Middle East as they do for the United States and Japan, and some regions are routinely shafted despite the success of their local players on the global stage.

The Tekken World Tour still isn’t perfect in that regard, but the organisers plan to greatly expand its reach in 2019 by adding events in Peru, Greece, Sweden, the United Arab Emirates, and South Africa, the last of which marks the first and only time an official fighting game competition has acknowledged the continent of Africa in its event lineup. Just under half of the 27 tournaments on the 2019 Tekken World Tour are newcomers.

“Moving into less travelled spaces required a willingness to trust new organisers and the clear communication of our and our fans’ expectations surrounding Tekken World Tour tournaments,” Thiher explained.

“We believe it is an important step in continuing support for the worldwide Tekken fandom to provide these opportunities. In the long-term, Tekken’s community will benefit from Bandai Namco and Twitch supporting the game’s global competitive player-base. Dojo tournaments help local events (their players, organisers, and fans) cultivate awareness aimed at developing new competition hubs. With Pakistan’s Arslan crowned champion at 2019’s first Tekken world tournament at Evo Japan, we believe it is a perfect year to be increasing the visibility of emerging regional hubs.”

Official fighting game circuits have the unenviable responsibility of providing widespread and equal opportunity to the global competitive community, a task that seems to be easier said than done, even with massive corporations like Capcom, Bandai Namco, and Twitch at the helm. That said, 2019’s Tekken World Tour directly addresses some of the most important concerns from years past, offering more favourable circumstances to a larger swath of competitors.

By relaxing the qualification process, expanding to regions that have gone ignored for far too long, and upping the rewards players can expect to earn, the Tekken World Tour organisers have made drastic improvements. My only hope is that these kinds of thoughtful decisions become the norm for corporate-run fighting game circuits in the future.

Tekken World Tour 2019 will kick off at The Mixup in Lyon, France on April 20, running through to the finals in Bangkok, Thailand, the official date of which has yet to be finalised.