The Bizarre Lives Of My Randomly Generated BitLife Characters 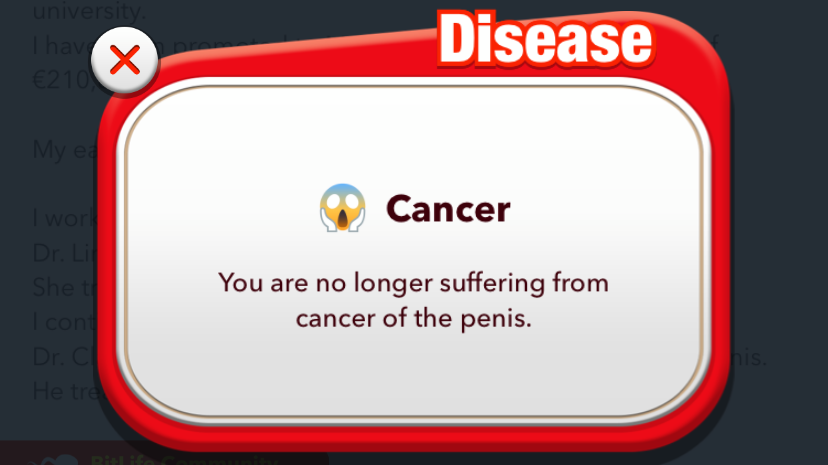 Yesterday, in BitLife, I was playing as Basil Andre, a french businessman, when disaster struck. I had been slowly climbing the corporate ladder, amassing a family, when suddenly, I got diagnosed with penis cancer.

BitLife is a mobile game that bears a lot of similarity to RealLives, a free educational game that was intended to teach young people how people live all over the world. I played the hell out of RealLives as a kid, even though there’s not much to it. You’re born as a randomly generated person, then click a button to age a year. You go to school, gain siblings, friends and lovers, start a family and join the workforce, then die. You’re given some choices when it comes to things like who to marry, but otherwise, the gameplay mostly consists of clicking the button to age a year.

BitLife plays almost exactly the same way, though it gives you more options for doing stuff in your free time, like going to the movies, getting plastic surgery, or committing crimes. In RealLives, the game takes where you’re born into account when it comes to what kind of education you’ll have or what kind of money you can make. BitLife is more concerned with being funny.

My BitLife character Basil Andre also developed an alcohol problem while suffering from penis cancer, though he would survive long enough to become CEO. He stumbled a bit in other aspects of his life; after his first stint in rehab, he was fired, though was soon employed again by a different company as Vice President. At age 72, he was cured of both his cancer and his alcoholism. Though his relationship with his wife Sofia was rocky, they stayed married for over seventy years.

Basil’s life wasn’t the most extreme of the ones I played through, though. That award goes to Aisha Robinson, who started out as a promising artist, but after she couldn’t find a job, turned to a life of crime. She was arrested at age 28 for selling cocaine, then tried twice to escape from prison. On her second attempt, she was successful, and lived on the lam for a few years, even starting a relationship with a financial analyst named Chester.

She ended up back in prison a few years later, then had her prison sentence extended for another ten years because she accidentally killed another prisoner in a fight. While she was in prison, Chester cheated on her, then left her.

After appealing her sentence at age 46, she managed to get out of prison, then contracted syphilis. She started dating Clifford, who she married, and they stayed together until she died. She gained work as a Cat Behaviour Specialist, and after 34 years, she ended her life with a net worth of over three hundred thousand dollars and the eternal hatred of the rest of her family.

Living these imaginary lives in brief is just fascinating, and I could play BitLife all day. Though I wish it had some of the educational elements of RealLives, it’s also free to play, and it’s on my phone. In fact, during the course of writing this article, I started a new life in BitLife. Her name is Heidi Watts, from Melbourne, Australia. I wonder what she’ll get up to.