The Division 2’s Opening Is As Subtle As A Sledgehammer

The Division 2, an apolitical game about amassing purple quality backpacks, is currently playable for Gold And Ultimate Edition users.

I’m having fun surviving battles alongside friends and finding secrets down side alleys, but I have some questions about the game’s opening cutscene.

In it, America has been ravaged to the point of near-apocalypse by a viral terror attack. We see a shot of a latte with Christmas lights glittering in the background slowly panning out to a “Free Wifi” sign on the cafe window—when internet and power were lost, people survived. (There’s a strange dig about free coffee here, but whatever; the message is mostly aspirational.)

Then, a breaking point: Hospital services shut down, resources were limited, and basic health problems became life-threatening. But people came together – our narrator points to the power of human resilience. We see sweeping swaths of green: flowers blooming in the midst of a ruined city, verdant fields as far as the eye can see.

They helped each other, built communities, persevered. “What we want,” the narrator explains, “is also truly what we need.”

We see a point of no return, and we see people coming together. What does the scene tell us was the crux of that transition? The narrator offers the answer via a question mid-scene:

“With no police to protect you, did you own a gun? Did your neighbour?”

Of course, it’s not shocking that The Division 2 has such a pointed, if unsubtle, focus on guns. This is a loot shooter. You gotta shoot to loot to get more shooty things to help you do more looting. You can customise your guns, and there’s perks to expand your arsenal, missions to gain different types of modifications, and even cosmetic skins that you can slap on to higher-rarity weapons.

Last night, I bought some of the in-game currency to test out the microtransactions. By the end of the night, I had found a blue-quality marksman rifle and added a 4x ACOG scope and a decent muzzle modification. It’s powerful and has a satisfying kick when you fire.

For the microtransaction, I bought a trippy weapon skin – a sort of tie-dye pink and purple puke design – and added it to my weapon.

I’m enjoying exploring its dilapidated Washington, DC, and surviving tough missions with my friends, but I’m uneasy. It’s just hard to focus on that when I’m looking down the barrel of a cutscene so heavy-handed it looks like a Heckler & Koch infomercial. And yet, when night falls and I wander the quiet streets, the world sucks me in.

When I expand my base and add a small game room for kids to play in, I see flashes of a game focused on community that I want to play. These human moments are what I think of when I consider community building. The game’s opening is a stark reminder that this is a Tom Clancy game, with all the problems that come with that name.

Fortunately, this is, again, not a political game, according to the developers. In 2018, Kotaku Editor-in-Chief Stephen Totilo interviewed creative director Terry Spier about The Division 2’s arrival into a charged political climate.

Spier stated: “ So, the goal isn’t to make a political statement. It’s not to reflect on any of the things that are happening in the current world, in the live world.”

This is part and parcel for the military genre and post-apocalyptic storytelling. It’s also just part of The Division. Yesterday, I streamed The Division 2 with my coworker Paul Tamayo and we hit up a Control Point. These locations, dotted throughout The Division 2’s districts, are sometimes occupied by enemy factions.

If you clear them out, you gain access to a supply room with multiple chests and boxes to loot. This usually results in tons of gear and a few new guns. When I was playing with Paul, I was pretty damn excited to find some new guns. When people in chat asked what my loadout was, I was more than ready to explain that I had a decent rifle and a good shotgun.

In spite of all those conflicted feelings above, The Division 2 is fun to explore and play. Finding new loot is exciting, and I’ve enjoyed the easy curve upwards as I’ve been showered in loot. I want to explore this game. I want to build more than just a play room at my various outposts. I want to rebuild communities. 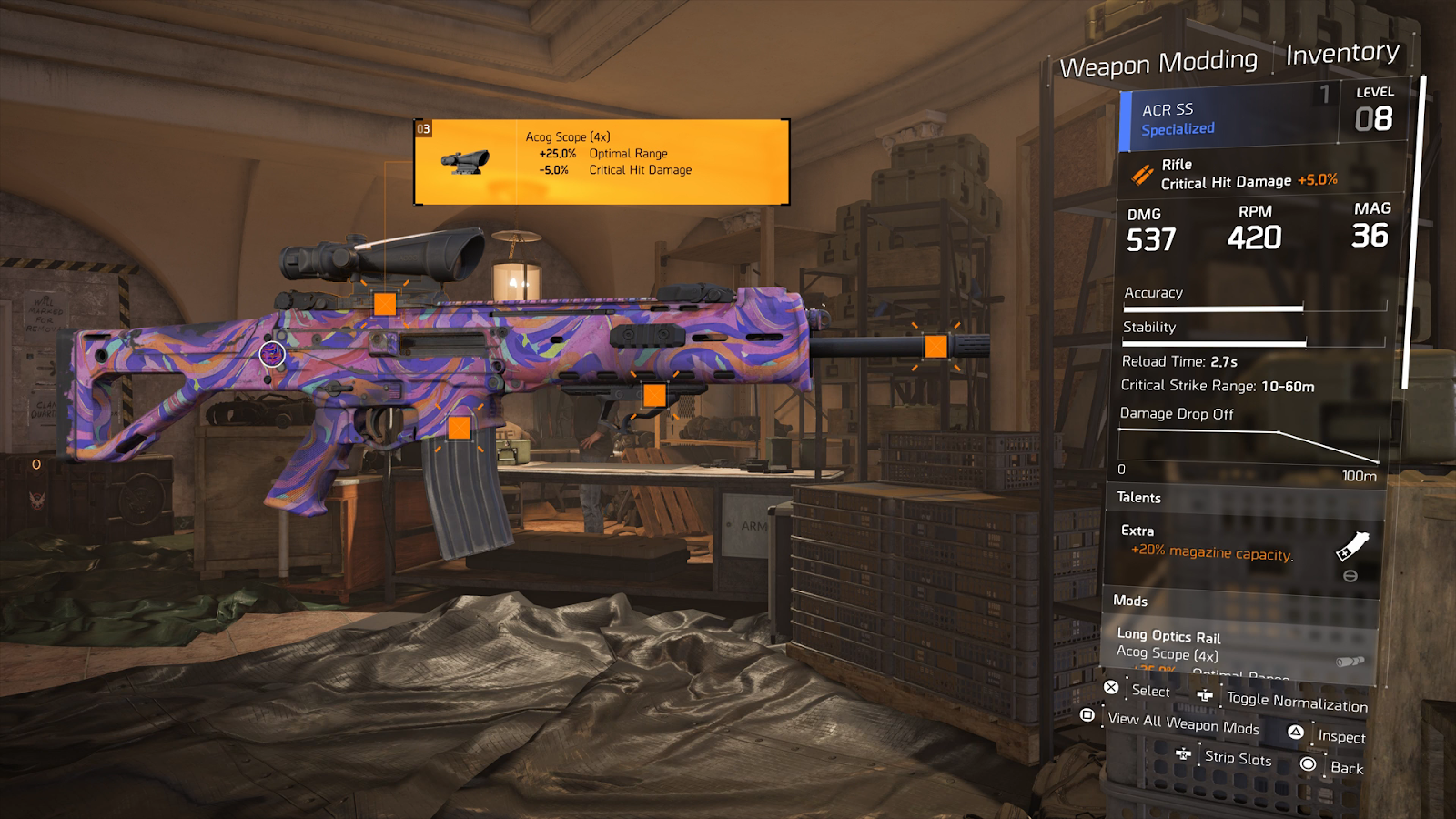 I’m going to play The Division 2 more tonight. I’m almost level 10 and there’s tons of missions left. I still need to try structured PvP and explore the Dark Zones, where players can gather loot and kill each other freely. I’ll probably snipe some unsuspecting player and take his guns. I have a lot of guns in The Division 2 already. I’m excited to see what I’ll get tonight.

Anyway, do you own a gun? Shout out in the comments if you go to the range. I used to.