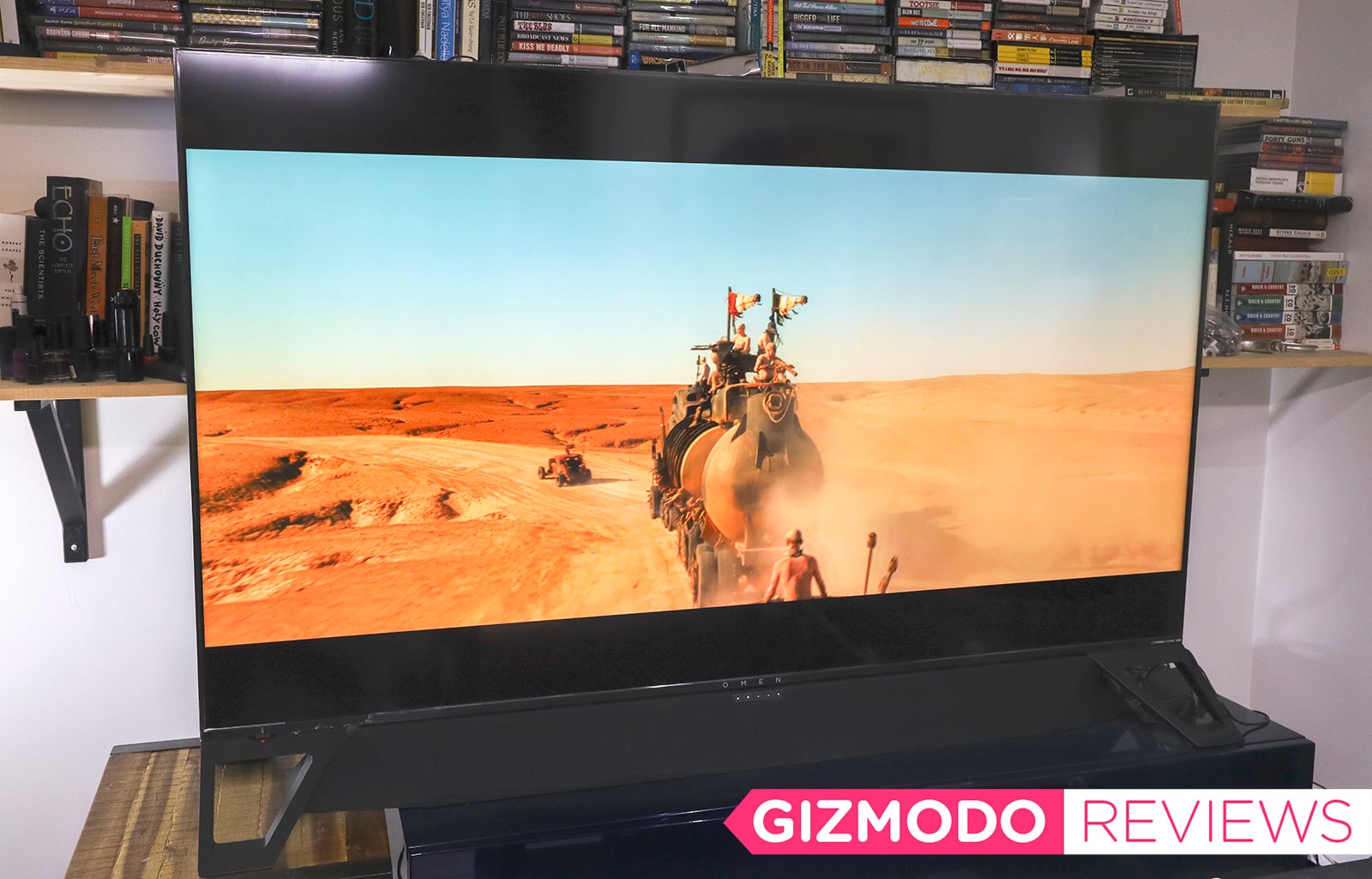 You’ve sat too close to the TV. Or to the screen at the theatre. Everything warps when you get up close. People become giants. The screen seems to go on forever. Everything takes on that 8-Bit video game look as you can see the sharp outline of each pixel. But have you ever sat too close to a computer monitor? Can you remember a time you put your nose to that screen and felt like it was too close—too much? If you answer is “no,” might I interest you in the HP Omen X Emperium 65? It’s 65 beautiful inches of display that HP thinks gamers will happily drop $US5,000 ($7,080) for. It is at once far, far too much screen for a mere computer, and it is gluttonously just enough. 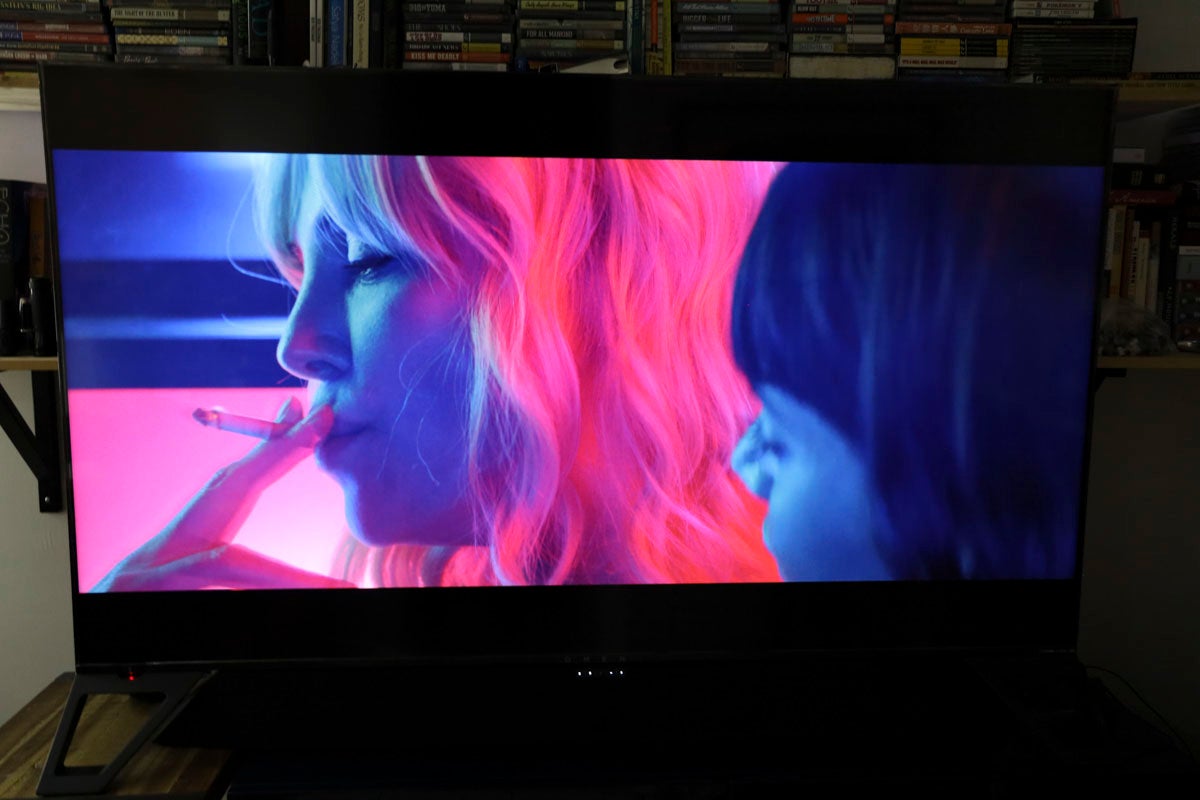 The best display you can get for gaming at this price range.

Not a good enough TV for non-gamers.

Editor’s Note: There is no Aussie pricing or availability for this yet, so we have kept the U.S pricing in.

The Emperium is the first of a new breed of too big computer monitors called Big Fucking Gaming Displays. No really. That is the name. BFGD for short. Nvidia announced a few of them back in January 2018, and then there was silence for a year. Now HP is the first partner to bring a BFGD to market. The appeal of the BFGD is, ostensibly, that I could get rid of the 65-inch OLED TV I use now and replace it with a 65-inch gaming monitor so I can finally get the big eye-popping display console gamers have had for years, but also something capable of actually handling the content my much more expensive computer churns out.

How does it game?

TVs and monitors handle content very differently. Besides HDR and 4K and 8K, the big buzz word in high-end displays right now is Variable Refresh Rate (VRR). A traditional display will refresh a few times a second. A 60Hz display 60 times a second, a 120Hz display 120 times a second, and so on. This isn’t a problem when watching TV or movies, which have a specific refresh rate, but when playing games the number of frames supplied per second is dependent on the content. So a game might do 60 frames per second one moment and 90 fps the next. This can lead to screen tearing, where the game supplies frames faster than the monitor can refresh them. VRR lets things be more steady. A game capable of 60fps or higher will only supply 60 fps on a 60Hz display. No tearing. 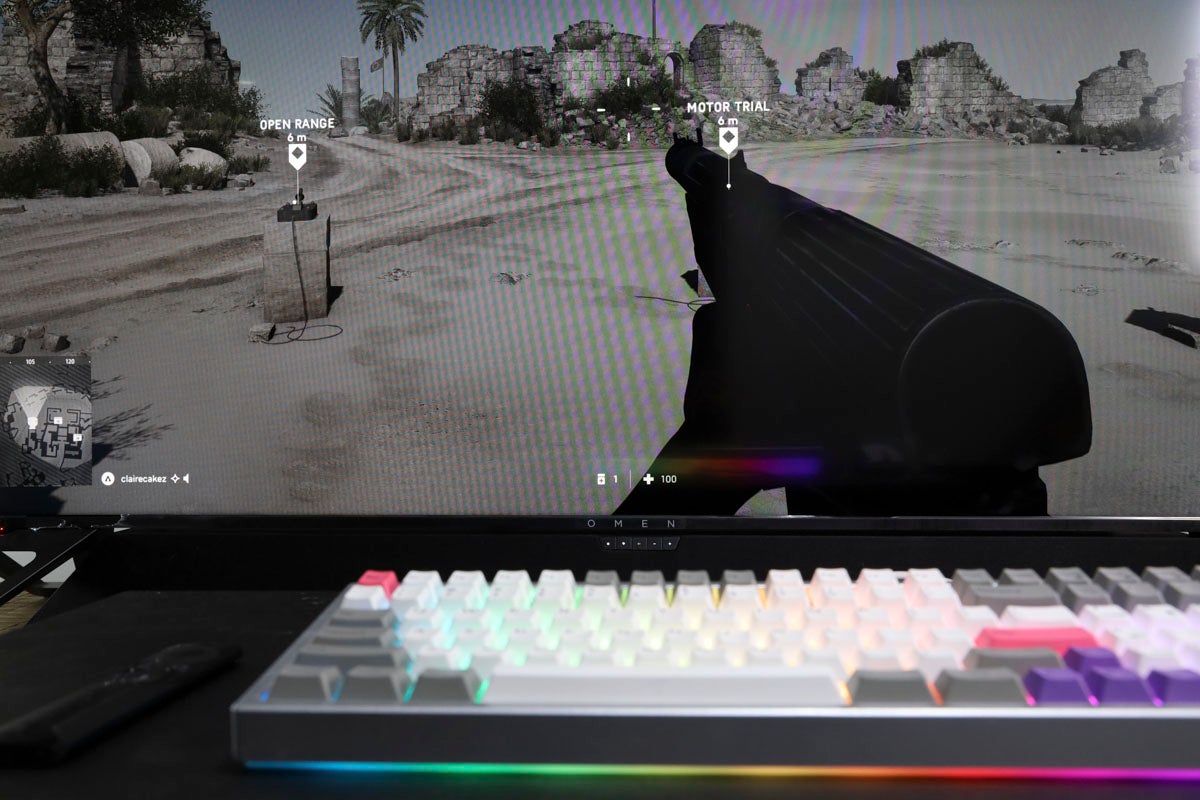 Gaming is actually pretty great on this thing, but setting up your space, so you have a table for your keyboard and mouse might be a challenge. (Photo: Alex Cranz, Gizmodo)

The Empirium uses Nvidia G-Sync, a super smart kind of VRR in which the GPU and display talk to one each other, so they always know how to push out the optimal frame rate in any given moment. It’s neat, but many people are just fine with less intelligent FreeSync and Adaptive Sync, which are cheaper VRR standards supported by AMD and Intel respectively. This monitor does not officially support those standards, so your results may vary if you are not using an Nvidia GPU.

Samsung makes TVs using FreeSync, which is supplied by Nvidia’s GPU rival, AMD. It works with some Xboxes via HDMI, which supports VRR. But HDMI VRR has limitations. It can’t do G-Sync, at all. There’s not enough bandwidth in the cable. Nor can it do higher frames per second. Most TVs come with HDMI 1.4 ports which can only do 4K at a 30Hz refresh rate. HDMI 2.0a brings that up to 60Hz, but it doesn’t support VRR. That requires HDMI 2.1 which you’re only starting to see in TVs this year.

The Emperium might lack HDMI 2.1, but it has DisplayPort, which not only supports VRR, but specifically the more demanding G-Sync, as well as 4K at 120Hz. No TV can compare, and in my conversations with TV manufacturers, it doesn’t appear that this is going to change any time soon (unless the Emperium and its ilk are huge successes that force TV makers to adopt this new technology). So if you want to PC game on a 65-inch display, the Emperium is the only option that makes sense.

But is it good at what it does? Yes. When it comes to gaming, the Emperium presents a sharp picture, and I can play Battlefield 5 with a mouse and keyboard from six feet away, or sit up close with a controller and enjoy some Assassin’s Creed Odyssey and never find myself worrying about lag or unsightly pixels. Even using Windows 10 isn’t terribly uncomfortable—though I don’t think I ever needed to write a blog in Kinja on a 65-inch screen.

The day-glo colours Atomic Blonde pop, while the darker skin tones of the cast of Black Panther always look human, instead of orange. The TV is capable of HDR10, which is solid—though I would have preferred support for DolbyVision as well given the price. The system does have a little problem with blooming, or flashlighting, which is when bright objects near dark parts of the screen cause to the dark parts to illuminate too. You can see it as a faint bluish grey glow around the particles in the video below.

It’s not the end of times. LED TVs all struggle with this problem, and HP has done a decent job with it, to the point that I don’t even notice when I’m sitting dead center and watching the display.

While the picture quality seems like fully baked perfection, other more TV-centric elements of the set feel like an afterthought. Take the built-in Nvidia Shield for example. This gives the Emperium smart TV functions thanks to the Shield’s support of Android apps and Chromecast. Yet it isn’t the hub of the display’s software. If I want to switch from the Shield to my Switch, I can’t just choose the input like I might with a Roku or Amazon Fire TV. I have to leave whatever app I’m in and turn on the Emperium’s local UI from the Shield’s system settings. It’s clumsy, and even just an input button on the included Shield remote would have made things better. 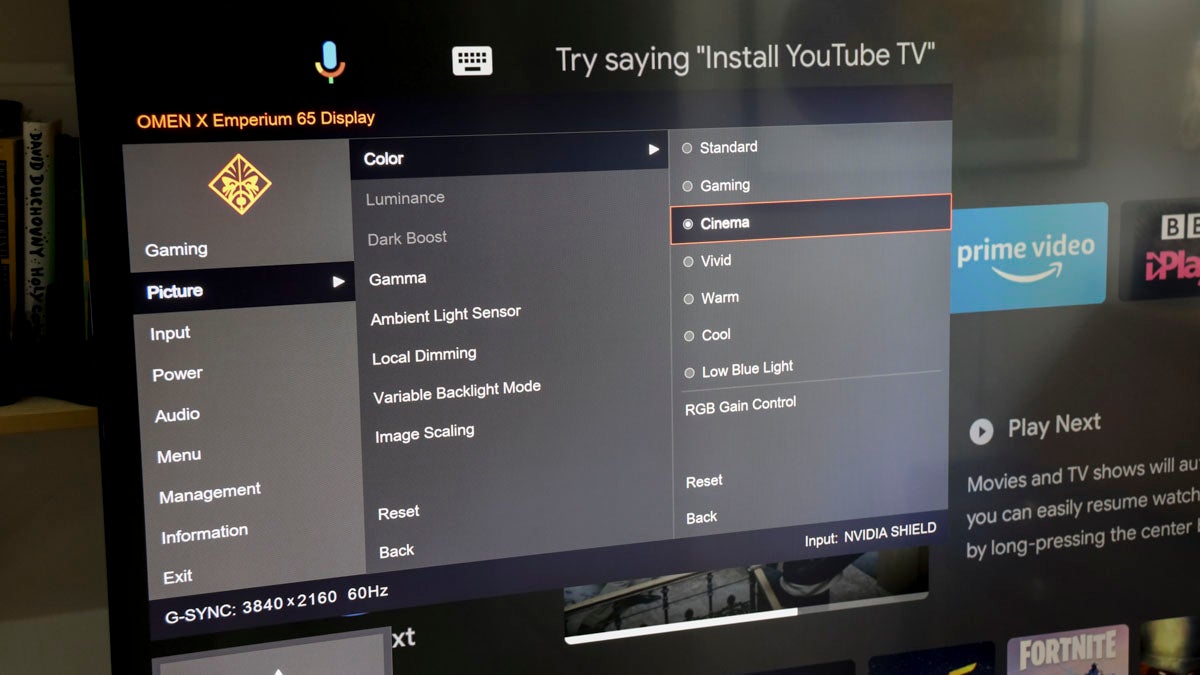 The local UI is also clumsy, just like every other high-end computer monitior’s clunky options. There’s no fine tuning of the picture or audio. That’s ok if I’m adjusting everything from my $US1,000 ($1,416)-plus PC, but not very helpful with my Switch.

How does it look?

But the biggest problem with the Emperium is the industrial design of the display itself. TVs the same size as the Emperium are all doing their damnedest to make the non-display elements disappear. Some go with a clear pedestal while others like slim reflective feet. Anything to make the display look like it’s floating. Not the Emperium. No, this is a gamer’s display ok? 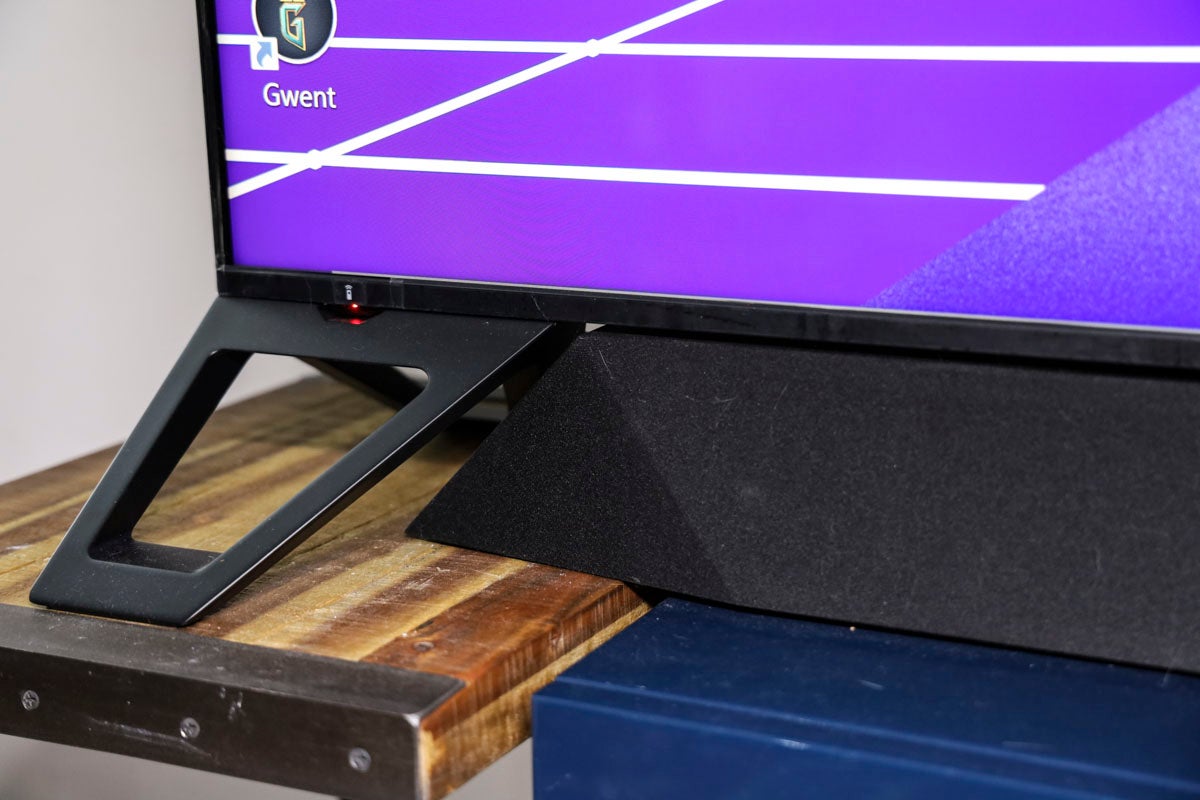 The base of the Emperium has a very distinct style. It’s not for everyone. And its feet mean you’ll need or really large piece of furniture to place it o nor an extra side table, or you’ll just need to mount it, but it’s very heavy so make sure you bolt it to the stud. (Photo: Alex Cranz, Gizmodo)

So it’s got big honking feet that look like they’re inspired by Alien. There is no mistaking this thing for anything but a product for gamers. Have a tasteful mid-century modern aesthetic in your living room? TOO BAD. ONLY GAMER TOWN HERE. When you flip it on, a strip of LEDs on the back glow bright red, and the included soundbar rumbles, so you know you are here to PLAY. 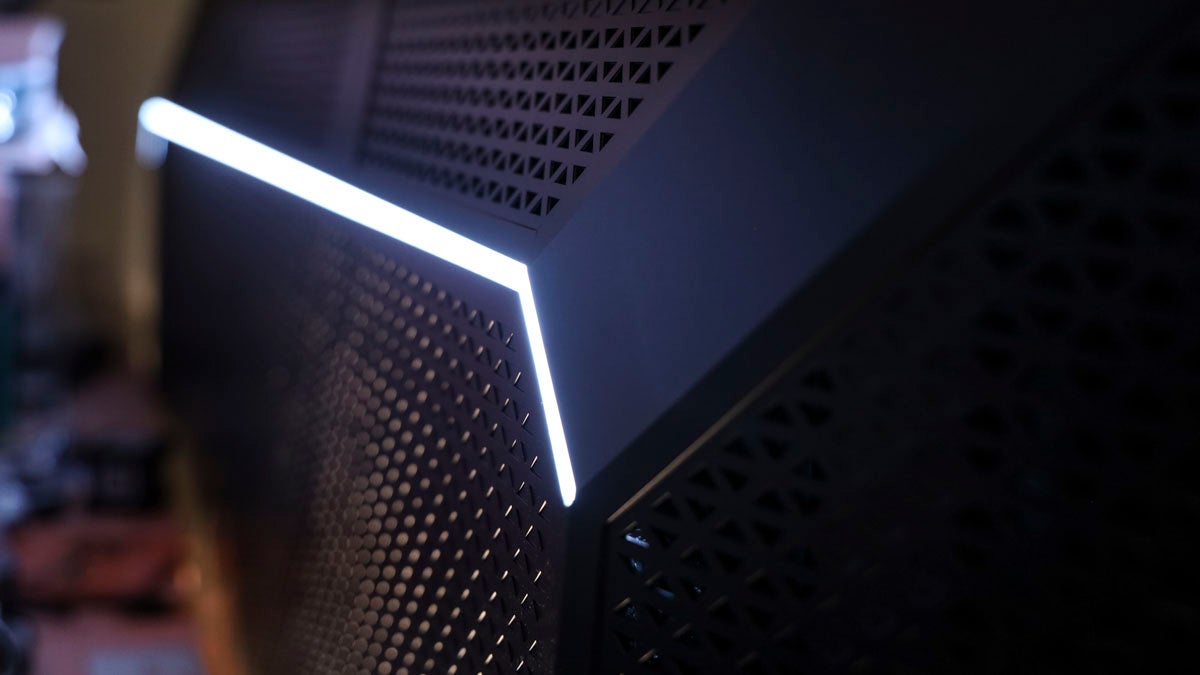 This strip of LEDs attempts to mimic whatever is on screen. I found it a little green, and would have liked it to be a little brighter, but no one else is doing this right now, so I won’t complain that much. (Photo: Alex Cranz, Gizmodo)

This thing is so pointedly specific in its aesthetic that only a small subset of the population will find it attractive. So you can use it to find others like you. Do they smile politely when you invite them into your cramped bedroom and motion to the multiple paychecks wrapped up as a display? Or are they genuinely as delighted as you are?

But look, if you can afford a $US5,000 ($7,080) 65-inch monitor and the people you invite into your life are ok with that decision, and the look of the thing, then it doesn’t matter what I think about it. What matters is, is it any better than a TV? 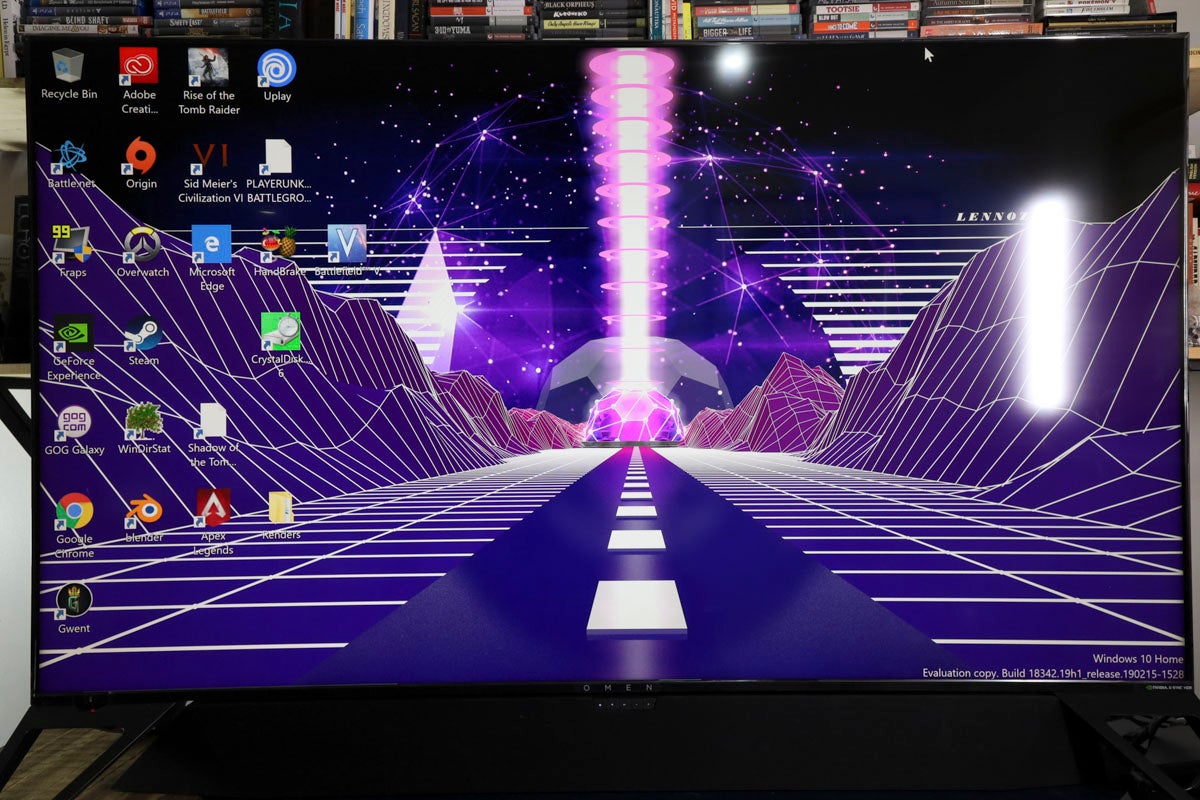 And for PC gaming, the Emperium is undoubtedly the best 65-inch display you can buy. But really it is ONLY if you want to PC game. If you’re on Xbox or PlayStation, you will never ever appreciate what the Emperium can provide. It is a waste of your money and the display’s impressive performance, and there are TVs with a similar picture quality that cost a whole lot less. But if you PC game, and you’re ok with the look, AND you have $US5,000 ($7,080) to spend on a monitor, then, I guess, your very small and expensive niche has been filled.