dark horse comicskek wkelly fitzpatricklela gwennlukasz kowalczukmatthew dow smithrafael pezentethe pull list
To sign up for our daily newsletter covering the latest news, features and reviews, head HERE. For a running feed of all our stories, follow us on Twitter HERE. Or you can bookmark the Kotaku Australia homepage to visit whenever you need a news fix.

We all have at least a few deeply-held beliefs that would alarm our peers were they ever to be made public. But having faith in the wild ideas lurking in their minds is what makes the heroes of this week’s best new comics fascinating, even if they themselves don’t properly feel that way.

Conspiracy Dog telling it like it is. (Image: Lukasz Kowalczuk, Alternative Comics)

Everyone has that person in their life who’s become fixated on one conspiracy theory or another. They’re the kind of obsessions that, once others become aware of them, fundamentally change the way that people see you — for better or for worse.

But in Conspiracy Dog, that isn’t really something the titular hero is particularly concerned about because, well, he’s a dog. Conspiracy Dog is the embodiment of every wack job you’ve every encountered who insists that Illuminati members are lurking in the shadows and manipulating society as a whole with their nefarious plans.

When the Russian government develops a weapon that unleashes downpours of dog poop filled with mind-controlling worms, a team of canine combat experts are deployed to save the day.

But Conspiracy Dog’s narrator is unreliable, meaning that there’s no way of really understanding just how much of the story being told is meant to be interpreted as a series of literal events, or if everything’s being filtered through the warped perception of a dog who, for whatever reason, really, really thinks the government’s out to get him. (Kek-W, Lukasz Kowalczuk, Alternative Comics) 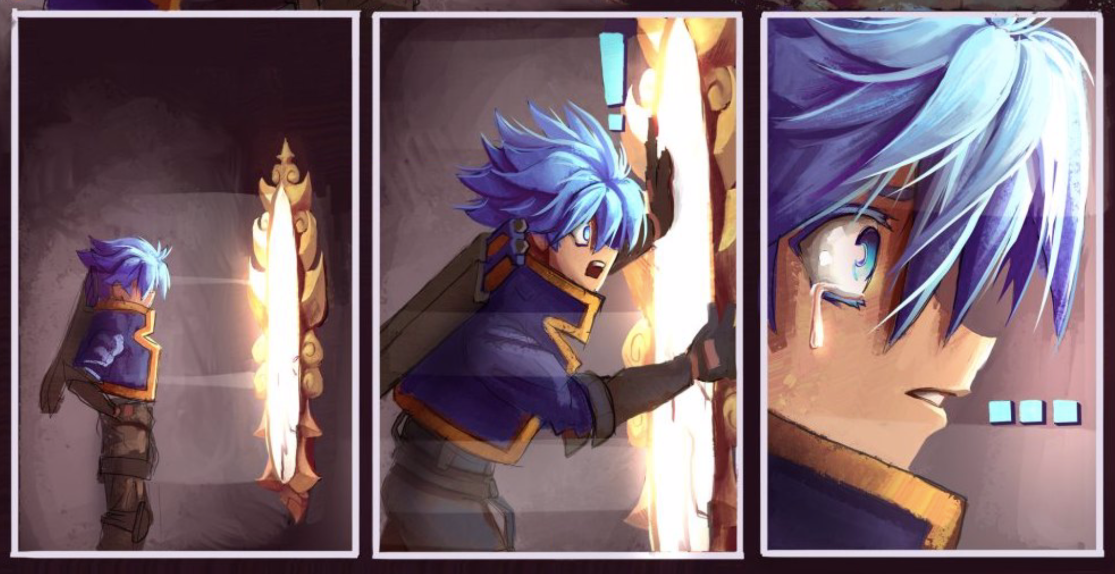 The immersive narratives at the centre of a lot of modern video games are designed to pull you in and make you feel for the characters in such a way that you become invested in the game’s larger narrative.

Alfie, the hero of Rafael Pezente’s Alpha & Omega, is a man on a mission that forces him to confront demons from his past that may or may not actually be real, depending on the way you look at things.

There’s an interiority to Alfie’s mind that makes it unclear just how much of the things he’s experiencing are actually happening in the real world, or just something in his mind. (Rafael Pezente)

Chuck warning people about what’ll happen to them if they get too close. (Image: Matthew Dow Smith, Kelly Fitzpatrick, Dark Horse Comics)

The concept of weaponised bad luck isn’t unique to Bad Luck Chuck, but rather than throwing Maximoff-approved hex bolts, Chuck’s powers are a bit more passive. Wherever Chuck goes, bad luck follows, and eventually, things begin to go wildly awry whenever she stays in any particular place.

While that obviously means that Chuck’s life is difficult, she’s managed to make the best out of a bad situation by turning her abilities into a service for other people.

You got something you need to mess up? Call Chuck. She’ll show up, make the most casual of appearances, and somehow everything around her will go up in flames (or some other kind of catastrophe) without it at all being traceable back to her.

As someone who’s plagued by bad luck, Chuck isn’t exactly the most empathetic person; she isn’t sorry for the havoc she unleashes into the world.

But when she’s hired by a woman who’s trying to fight against her own nefarious family, Chuck begins to realise that maybe a moral code might be something she wants to consider in the future. (Lela Gwenn, Matthew Dow Smith, Kelly Fitzpatrick, Dark Horse Comics)