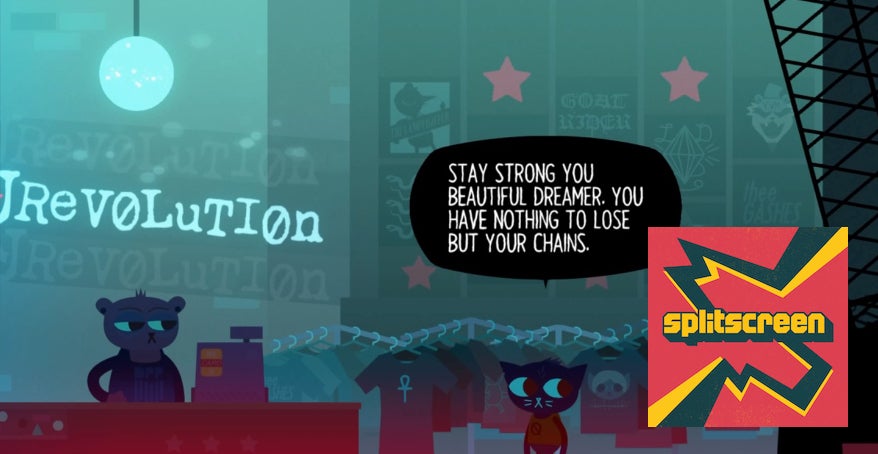 After co-writing and designing Night In The Woods, Scott Benson and Bethany Hockenberry co-founded a new game studio with artist and musician Wren Farren, except this time, no one is the boss. The Glory Society is a worker co-operative, which means that its co-founders have a different workflow and creative process from other indie studios.

During GDC 2019, Scott and Bethany stopped by Kotaku Splitscreen to talk about how they still manage to get everything done.


In the second half of this episode, longtime Splitscreen guest Matthew Burns of Zachtronics Games told me and Jason about his upcoming visual novel about artificial intelligence. He also talked about his love of the SpeedTree tool. It’s a game tool that makes trees, and it makes ’em fast.

Scott Benson: You make decisions democratically by votes. We have a big list of bylaws of how we deal with certain things, which is good, because you want to get that out of the way at the top.

Jason: Everyone gets paid the same?

Scott: Yeah, we negotiate that. Also, we control what happens to all the profits. Workers get all the profits, too. There’s no one person making the decision on all that. We have budget meetings, and we talk about it. We know what everyone makes, salary-wise, because we have to talk about it and negotiate. Anyone can see the budget and what we have in the bank at any time, and we can discuss that.

For example, after GDC, when we get back, I’m gonna be like, “I could use a couple days off.” And we’ll talk about that.

Another big principle of co-operatives is: one person, one vote. So if you have, let’s say, someone who’s acting as your art lead, pushing the vision for the visuals of the game, and then you have someone who’s working with them, the art lead doesn’t get five votes when we’re deciding business stuff. They still only get one.

Jason: What made you guys decide to do this, to start this co-op?

Bethany: I think our main thing is, we didn’t want to be bosses.

Maddy: But we are in a union…

Scott: Yeah. Someone pays you, right? There’s someone above—all the things that happened to media in the past year, that’s not coming from you two.

Maddy: No, actually, it is. Jason and I have been single-handedly shutting down publications.

Scott: Yeah, so, I’m actually the CEO of Univision.

Maddy: No, I’m actually the CEO of Univision!

Scott: So, yeah, bosses in the sense of owners. People at the top who are skimming all that surplus value off of the employees below, and then making decisions for everyone beneath them. We just didn’t want to do that.

We’re both in our mid-30s, we’ve both had a whole bunch of jobs—service industry, home health care, up to doing client work and design work and animation work. We’ve done it enough that by the time we were in a position to start a studio to make our next game after Night In The Woods, and we had a little bit of funds to invest in that, we were like, god, do we want to be bosses? We’d be really cool bosses, but do we want to do this?

When we started talking with Wren, who’s a brilliant artist, super cool, great musician and everything, we were like, I don’t want to be Wren’s boss. Wren means as much to this as we do. Why would we perpetuate this shit, when we don’t have to?

Not everyone has that choice, but we had the choice because we were starting something. And a lot of other smaller studios also, it’s something that could be on the table for them, particularly if they’re just starting up. But also if they’re not. You could transition into something like this.

Jason: So, it’s the three of you? Are there more people?

Bethany: It’s three right now. Probably get up to five.

We’ve been asked this question a few times before. I think it’s largely that when we envision how these things work, we do think that there needs to be—when we did an interview last week, someone was like, “Where does the buck stop? Who is the last person that makes the thing?”

And the answer is all of us. But we each have different things that we do. We talk about horizontal organisation and vertical deployment, which is a great, very business-y way of describing it.

What that means is, Bethany’s our financial officer. Not officially – there’s no job titles, necessarily—but Bethany’s watching the budget. She’s making sure payroll goes out. But any of us can go and talk to Bethany about that. And when we’re making big financial decisions that affect the whole co-op, we sit and talk about it. But we also defer to Bethany on some of that stuff, because Bethany’s watching that.

I’m acting as a creative director on the game. That doesn’t mean I’m enforcing this vision, but I’m nudging us towards a shared vision that we’ve agreed on and that we’re talking about as we vote and as we go through things.

When Wren draws things, we’re not all sitting around being like, “Well, you placed that branch a little weird. Let’s all vote on it.” A lot of it is just communication, and a lot of it is knowing those final calls you can build consensus on.

It’s not as amorphous as it sounds. I think people are used to this chain of command thing. But through organising yourselves, you can have some trust in what other people are doing and talk to them if you need to.