When Should You Start Introducing Your Kids To Video Games?

As a gamer parent, I long for the day when I can play side-by-side with my beloved progeny. Overtly or not, I think most of us hope that our kids will turn out to be mini Pokémon trainers or enthusiastic Destiny squadmates. But what’s the best way to introduce children to games?

Sometimes, forcing something too early can have far-reaching consequences. Just ask my friend who tried showing his daughter Star Wars when she was only three years old. He ended up terrifying her so thoroughly that years later, she still won’t go near it. Sometimes, as parents, our enthusiasm to involve our kids in our passions can outweigh our better judgment. I definitely fell victim to this when I put Pokémon Let’s Go on the big TV in the presence of my two-year-old son: His annoyance that I was paying attention to something other than him was so great that he now firmly says “NO NO PIKACHU, MAMA” whenever he sees the Nintendo Switch.

Playing age-appropriate games in front of your kids might seem like the most obvious gentle introduction to video games, but there’s more to consider here. It’s a general principle that up until they are about age three, your toddler will see anything that takes your attention away from them as a Bad Thing. Video games do have a habit of commanding our attention, whether it’s Trials or Mario. Most kids are too little to be able to use a controller themselves at that age, so you’re dependent on their tolerance for watching you play. If you don’t want your wee ‘un to start associating video games with feeling ignored, it might be best to wait until they’re old enough to chat about what’s happening with you, and maybe even try playing themselves.

I think I’m going to wait another year or two before I start incorporating games I want to play into our family time, but I have recently started playing some simple Toca Boca games with my toddler on an iPad. They’re lovely, creative, Swedish digital toys built around ubiquitous small-person themes like trains, birthday parties and play kitchens, and I’ve been surprised and impressed by how quickly he’s picked up touch-screen control. After a couple of weeks, he already doesn’t need my help any more. 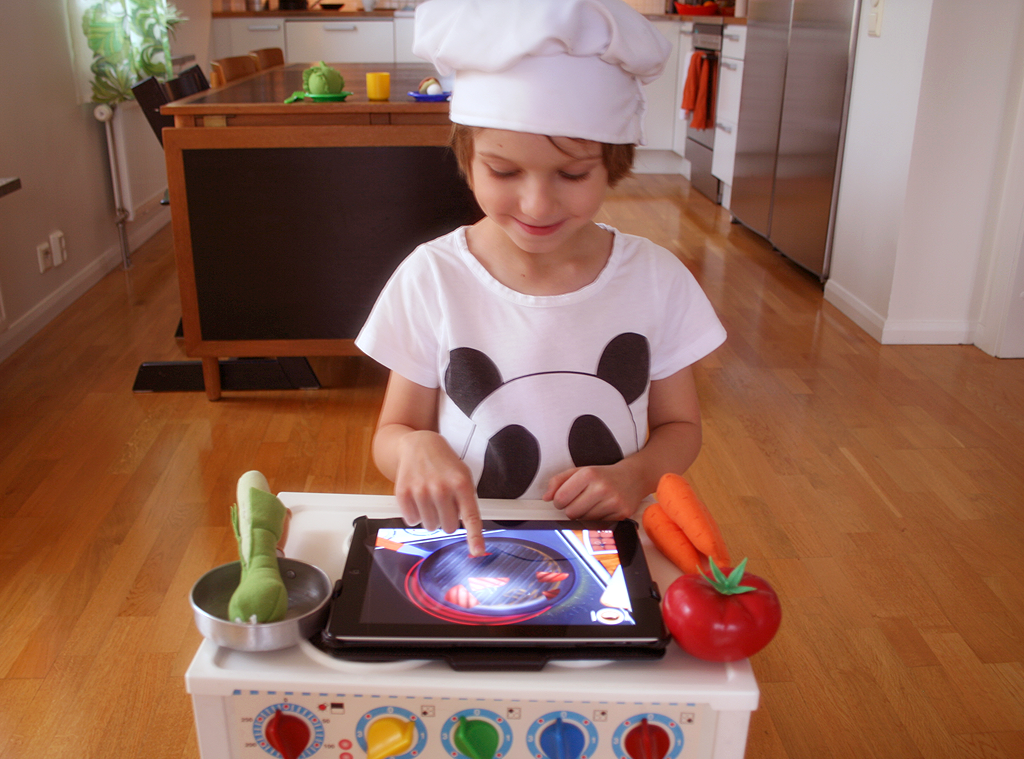 This is not my kid, but he also loves Toca Kitchen (Photo: Toca Boca)

Like a real-world toy, Toca Boca games allow for creative free-play. These games are so simple that they hold limited interest for me as an adult, but I find it super interesting to see how my child interacts with them. In Toca Kitchen, he enjoys trying to feed pureed lemons to a reluctant cat, and singing a little song about sausages when he fries them in a pan. Games that allow for open-ended rather than goal-oriented play are really well-suited to younger kids.

My friends who play games together with their older children — say, ages seven and up — all tell me that they started by letting their kids watch or experiment with what they were playing, and encouraging their interest when they showed it. Some of their sons and daughters were fascinated by games from the second they first saw them. Others didn’t develop much of an interest until a few years into school, when they started wanting to play Minecraft with their friends, at which point their parents used that as a springboard into the wider world of games.

It’s important to accept, however, that your kids just might not be that interested, or if they are interested, it might not be in the games you’d prefer. My teen stepson, though a very keen and impressively skilled player, has traditionally shown exactly zero interest in the games that I love. Bar an all-too-brief intersection over Minecraft when he was about six, our tastes remain almost entirely siloed. He loves horror and competitive first-person shooters, whereas I love… pretty much anything but. I now know how an ex-boyfriend’s rockstar father felt when his son turned out to be more interested in computers than Stratocasters. You never know, though. Your seven-year-old might discover that they love to sit and play co-op Spelunky with you, but no matter how careful and enthusiastic you are about introducing them to games, it’s always possible that it might not happen.

Of course I hope that my little kids will love the same kind of games that I did when I was younger, and that one day, I’ll be helping them get to grips with Pokémon types or Zelda secrets. It’s partly because, as a parent, I feel totally equipped to handle that, whereas if they develop an interest in football or gymnastics, I’ll have a pretty steep knowledge curve to scale before I can feel properly involved and supportive. Between now and then, I’m going to be mindful of playing on my kid’s level rather than my own, careful not to force it, and welcoming if and when he does start to show an interest.

How have you introduced games to your kids? How old were they when they started playing? Or are you the only player in your household of five?